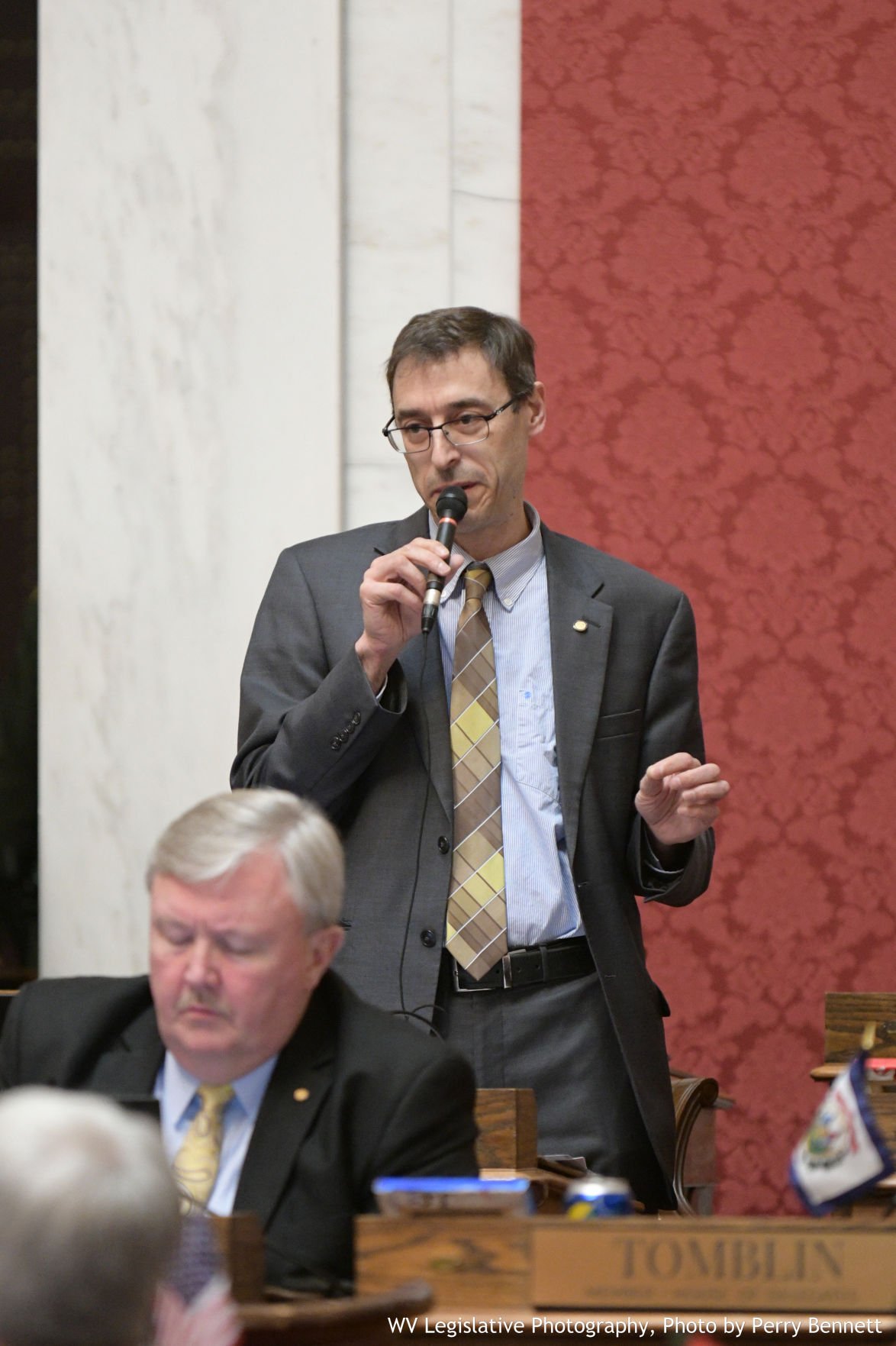 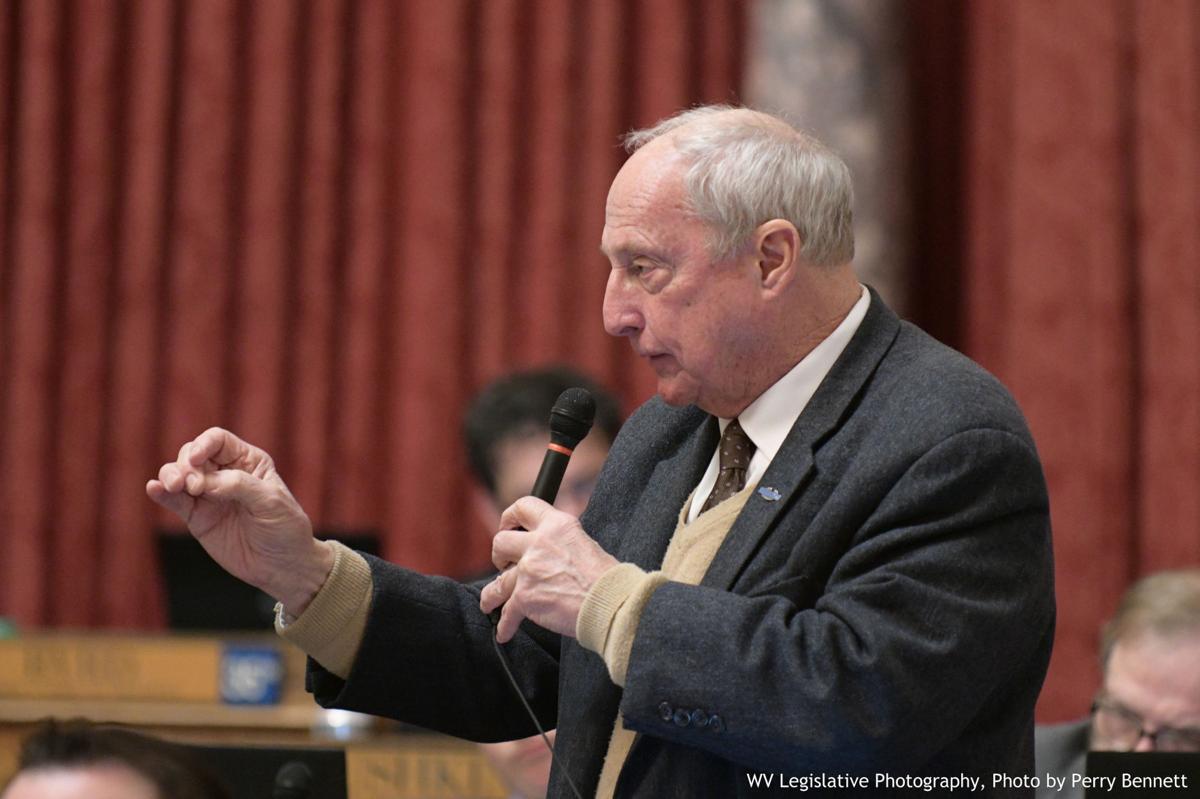 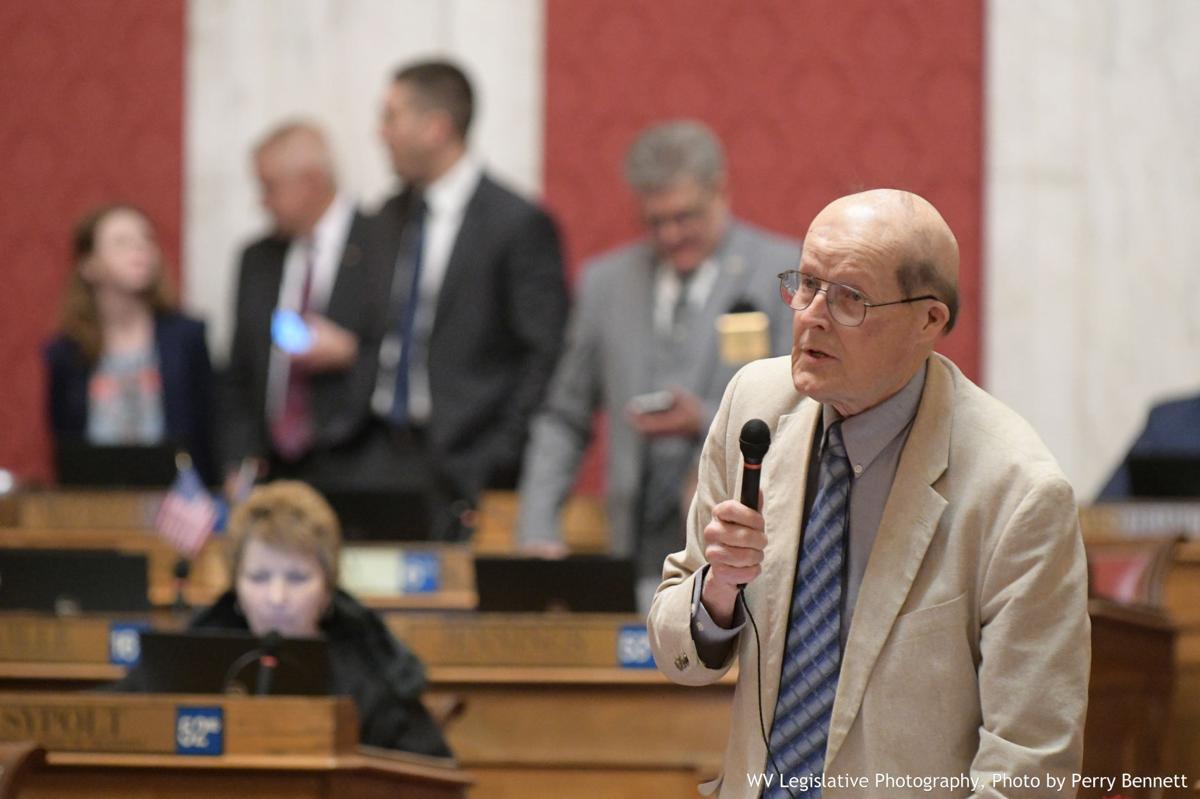 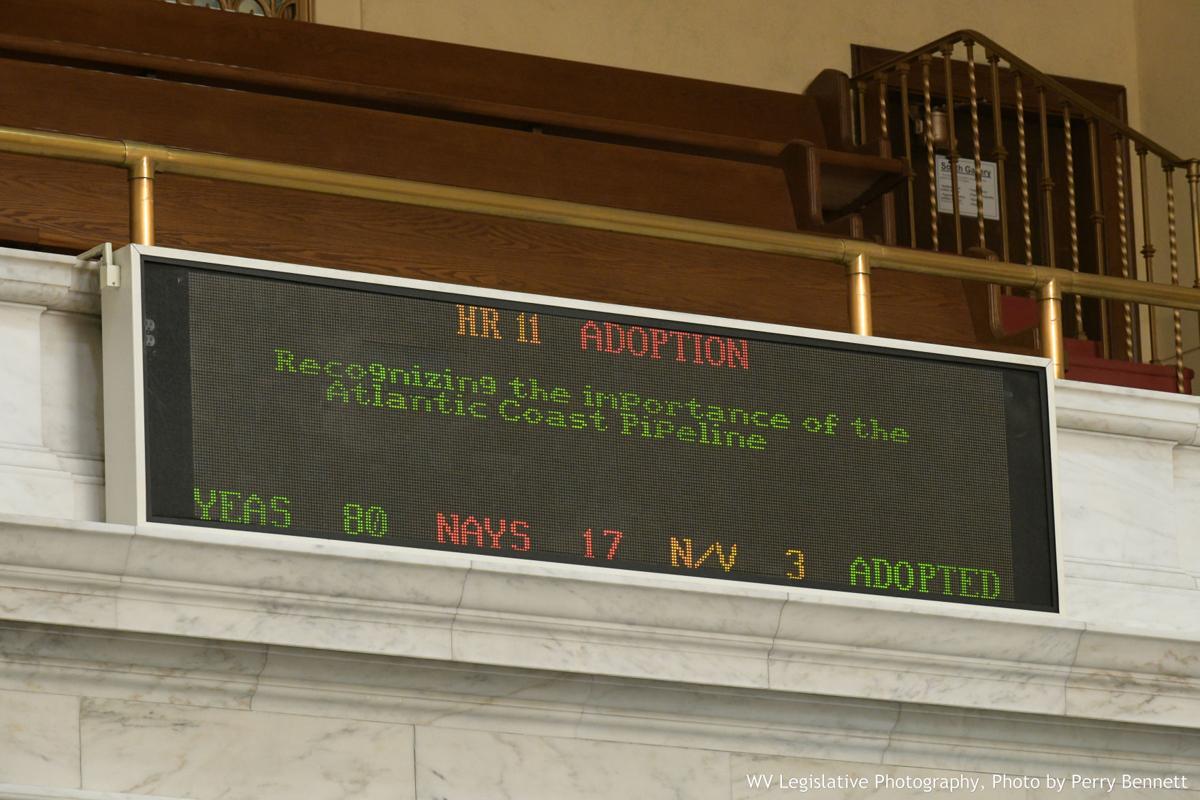 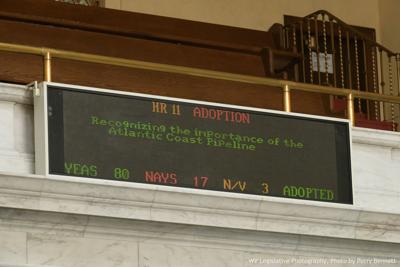 This article was produced in partnership with the Charleston Gazette-Mail, which is a member of the ProPublica Local Reporting Network.

It was getting late on March 7 in the West Virginia House of Delegates chamber.

There were only two days left in the 60-day legislative session, and lawmakers had been voting for hours. By 8:30 p.m., delegates had moved past bills and onto resolutions — measures that don’t become law but express the legislative body’s sentiment.

They acted on a batch of resolutions on a voice vote: One to name a Kanawha County bridge in honor of the late Charleston police Capt. Jerry Hill. Another proposed a study to see if struggling rural fire departments could be consolidated to save money. There was a resolution to designate the Mountain Cur (a medium-sized, rough-coated brown dog) as the state dog.

But one resolution seemed different from the others, Delegate Evan Hansen, D-Monongalia, said. He asked that House Resolution 11, titled “Recognizing the importance of the Atlantic Coast Pipeline,” be read and voted on separately.

“I understand this is just a resolution and that it’s late, but I just want to make sure people have read this resolution,” said Hansen, one of two delegates to speak up against it.

House Resolution 11, sponsored by nearly half the delegates, praised the Atlantic Coast Pipeline, a major natural gas project. Then, the resolution sharply condemned the citizens’ groups that challenged the project in court, calling their legal challenge an “all-out assault” with the goal of “forcing its cancelation.”

At the end of January, as the resolution was being drafted, Orndorff took five Republican delegates — Eric Nelson, R-Kanawha; Jason Harshbarger, R-Ritchie, who works for Dominion Energy; Scott Cadle, R-Mason; John Hott, R-Grant; and Chris Phillips, R-Barbour — out to dinner at Fazio’s, an old-style Italian restaurant in Charleston, according to a disclosure filed with the West Virginia Ethics Commission. The bill: $575.

All of those delegates would sponsor House Resolution 11, which was introduced one week later.

Harshbarger said he normally goes out to dinner with Orndorff during the legislative session, and that the dinner was “more as a social thing than anything.”

The other legislators did not return phone calls seeking comment.

Then, the day before the resolution passed on the floor, Orndorff, the West Virginia Oil and Natural Gas Association, and Antero Resources, the state’s largest gas producer, hosted a luncheon that cost $830 for the House Energy Committee, in the office of Delegate Bill Anderson, R-Wood, the resolution’s lead sponsor and chairman of the committee, another disclosure filing shows.

It’s not abnormal for a lobbyist to provide insight or help draft legislation. But Orndorff’s resolution was different from other pieces of legislation because it singled out a specific group. It sheds light on the close relationship between West Virginia’s growing natural gas industry and its legislative branch, as the Gazette-Mail and ProPublica chronicled last year.

“What I was trying to communicate to some legislators, what I thought was odd, was how it was directed at citizens who were pursuing mechanisms to make sure that laws are enforced. It seems almost like they were undermining their own authority at the Legislature,” said Angie Rosser, executive director for the West Virginia Rivers Coalition, which lobbies on behalf of environmental groups.

Orndorff confirmed that he wrote the resolution but said it was because Anderson asked him for a draft. There’s nothing unusual about that, he said — legislation has to start somewhere.

“I gave them a draft and they took the draft and rewrote it, and they asked me for a resolution, so I said, ‘I’ll give you some talking points,’ and they took it from there,” Orndorff said in an interview.

He also said: “I take delegates out to dinner all the time. I don’t think there’s a correlation between me feeding them and passing a resolution. It’s relationship-building.”

Orndorff said he didn’t actually lobby for the resolution after it was introduced. Any other group was welcome to write its own resolution, too, he said.

Anderson, however, said he didn’t know that Orndorff wrote it. “I had no knowledge of it,” he said. As for the luncheon in his office paid for in part by Orndorff, Anderson said such events are commonly sponsored by energy lobbyists. The resolution, Anderson said, “was not discussed at that luncheon. I don’t do business that way.”

Anderson also noted that the draft he first saw, which a reporter told him was written by Orndorff, was not identical to the resolution that passed. But the wording changes were minor. One changes “the Atlantic Coast Pipeline” to “the Atlantic Coast Pipeline and others”; another deleted the words “extremist environmental” from the description of the groups that challenged the project.

The Atlantic Coast Pipeline is a 600-mile-long project primarily being built by Dominion Energy that will ship natural gas from Northern West Virginia into North Carolina. Although developers say the project is key to transporting gas to the Mid-Atlantic region, citizens’ groups argue that regulators were hasty in their approval of the pipeline. In December, a federal appeals court sided with the citizens’ groups and vacated a key permit, saying the U.S. Forest Service had abandoned its responsibility to protect national forests. Earlier that month, the 4th U.S. Circuit Court of Appeals also issued a stay to the project’s permit from the U.S. Fish and Wildlife Service.

By March, construction on the project had been stalled for three months after the court’s decisions. Developers blamed the environmental groups’ “assaults and delaying tactics.”

“These unwarranted attacks have resulted in regulatory and legal proceedings that have repeatedly delayed both the Atlantic Coast Pipeline and the related Supply Header Project,” the resolution said.

Dominion Energy is among several companies trying to tap into the booming Marcellus Shale formation by building a natural gas pipeline. The work stoppage forced the company to lay off about 4,500 workers and pushed the project’s completion date back by about three years, according to a Dominion spokesman. Originally projected to cost about $4.5 billion, the Atlantic Coast Pipeline might now cost $7 billion. Its developers are appealing to the U.S. Supreme Court.

“Forty-eight hundred men and women lost their job a week before Christmas. Now, your paper doesn’t seem to be sensitive to that,” Orndorff said when asked about his role in the resolution. “Obviously, you will write a story saying that Dominion Energy is trying to influence the process. Yes, that’s our right to do that.”

Some of those workers were able to find new jobs quickly; some were out of work for longer, said Steve White, director of the Affiliated Construction Trades Foundation.

“What I would say is, it was our workers that got hurt when this project was put on hold,” White said. “We really wish that, whatever the problems are, they would be resolved and that our workers would not be the ones to bear the brunt of the legal battles.”

The Atlantic Coast Pipeline isn’t the only multibillion-dollar project that has been stopped after an appeals court ruled that federal agencies had neglected to follow their own rules. The Mountain Valley Pipeline, a 300-mile-long pipeline that will run from Northern West Virginia into Virginia, also was temporarily halted last year after the court said the Forest Service and the Bureau of Land Management ignored rules that protect rivers and forests.

That pipeline also is under federal investigation for possible violations of the Clean Water Act. Construction is still underway, with a targeted completion by the end of this year.

A review last year by the Gazette-Mail and ProPublica showed how federal and state agencies tasked with enforcing the nation’s environmental laws repeatedly cleared roadblocks and expedited natural gas projects like the Mountain Valley and Atlantic Coast pipelines.

“It concerns me that, even with all the consequences we’ve seen because of this hasty process or shortcutting process, we still have a resolution where they’re pushing it aside and saying, ‘As quickly as possible, let’s get this done,’” Rosser said. “That remains distressing and really not considering the communities and peoples’ properties being damaged when laws are skirted.”

A resolution two months in the making

According to records obtained by the Gazette-Mail, the groundwork for the resolution began in January.

On Jan. 8, a day before the regular legislative session resumed, Orndorff stood in front of the Joint Committee on Natural Gas Development in a Senate committee room.

He had a request.

“Do a resolution supporting condemning them,” Orndorff said. “I think it’s important for West Virginia to go on record that the end result of their tactics hurt the state economy of West Virginia.”

A few hours after the committee meeting, Orndorff sent an email to two staffers and another Dominion lobbyist with a note: “Attached is the resolution” we “spoke about today” and a copy of his draft, dated Jan. 7 — the day before he presented to the joint committee.

The resolution he wrote said the Legislature “categorically condemns these irrational, counterproductive and economically damaging assaults on the Atlantic Coast Pipeline and other urgently needed energy infrastructure” and said “some extremist environmental groups have launched an all-our [sic] assault on the Atlantic Coast Pipeline project, with the ultimate aim of forcing its cancellation.”

Almost three weeks later, Robert Akers, the chief lawyer for the House Energy Committee and staff on the Joint Committee, wrote back to Orndorff. The resolution draft Akers sent was almost identical to Orndorff’s first draft.

On the night the resolution was considered, which was one night after the luncheon Orndorff hosted for the House Energy Committee, Hansen, the delegate who opposed it, contrasted this resolution with one read right before. The other resolution, adopted on a voice vote without any debate, recognized “the importance of West Virginia’s energy resources and critical energy infrastructure to support economic development and national security.”

Hansen, who is an environmental scientist, didn’t have any problem with the message or language of the other bill, he later said.

As for House Resolution 11, he said: “I just thought this was such an irresponsible issue, I had no choice but to speak up. It was essentially the legislative branch saying we don’t want pipeline companies to follow the law, and that’s a very irresponsible stance for the Legislature to take.”

“The real attack is in the resolution itself,” Delegate John Doyle, D-Jefferson, said on the floor.

Delegate Andrew Byrd, D-Kanawha, voted for the resolution. He said he didn’t realize Orndorff wrote it.

“Ideas can come from your constituents, but drafting is usually put together by a delegate and reviewed by a delegate,” Byrd said. “I’m kind of shocked to hear that” the resolution was drafted by a lobbyist.

Asked whether he’d vote again in favor, he looked at the resolution.

After a pause, Byrd said he would — the “overall concept” was enough to outweigh the harsh language.

Taking the mystery out of cholesterol