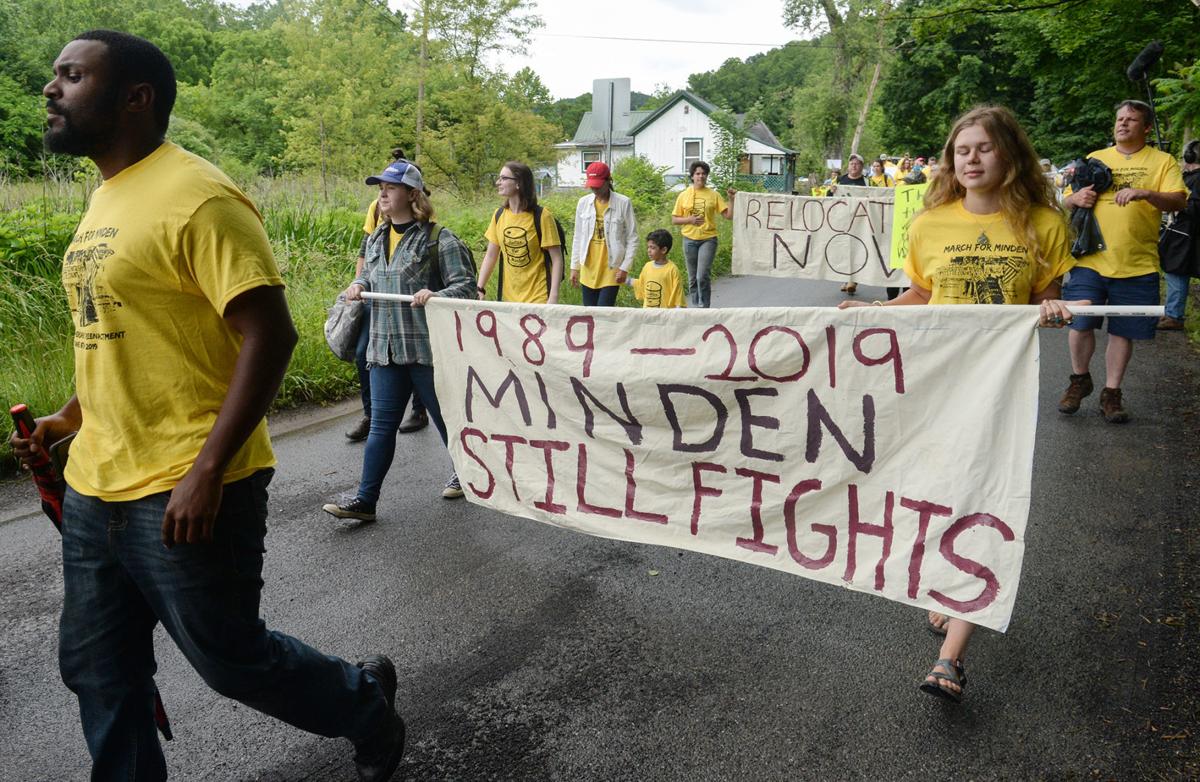 Residents parade through Minden, in Fayette County, on Saturday to mark the 30th anniversary of the first March for Minden in 1989. 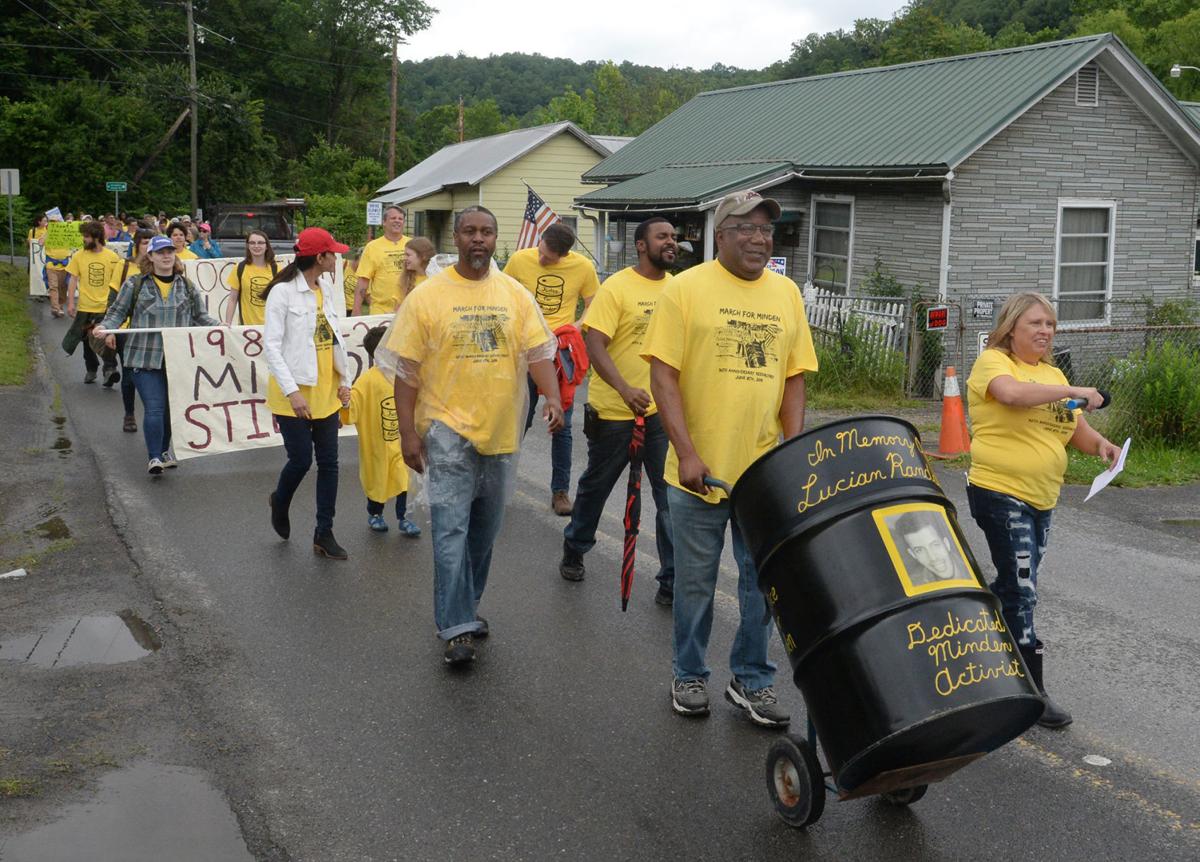 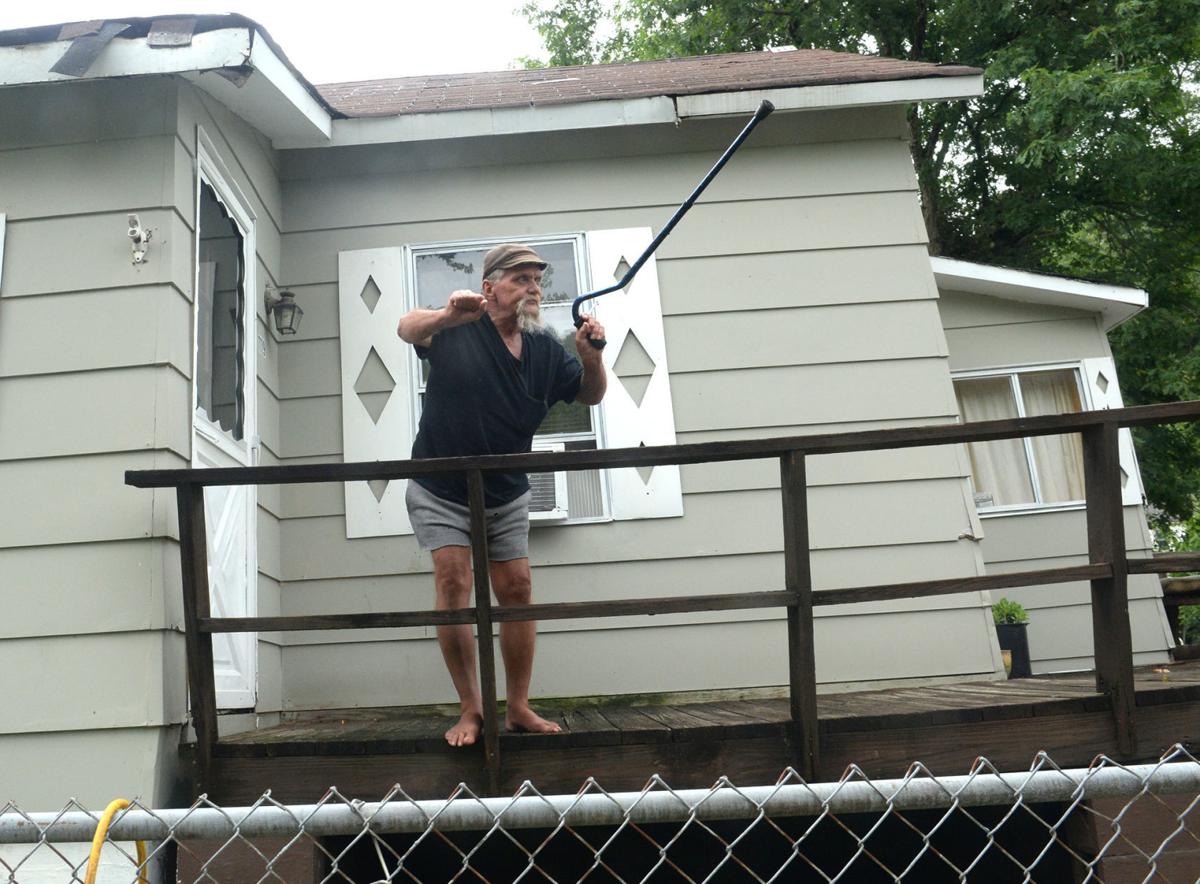 A resident of Minden raises his fist and his cane as the marchers go by his house on their way to the city park in Oak Hill. 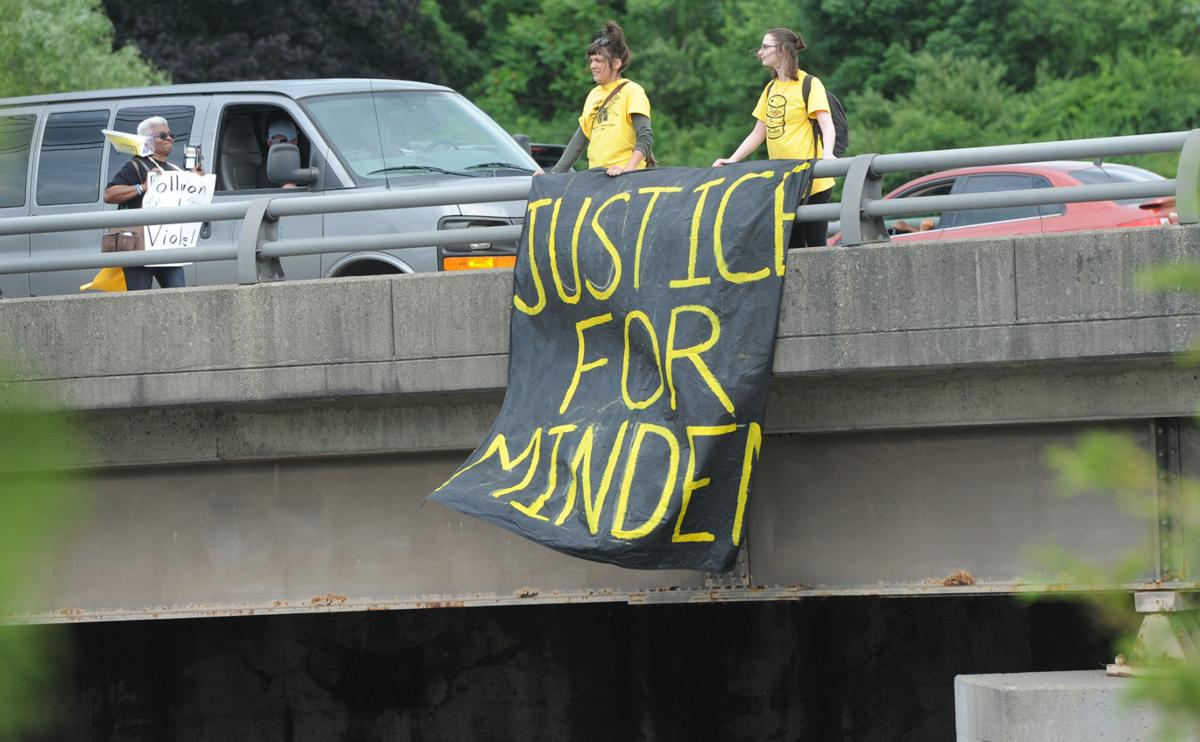 As the marchers cross an overpass entering Oak Hill, two of the participants unfurl a banner for passing motorists to see. 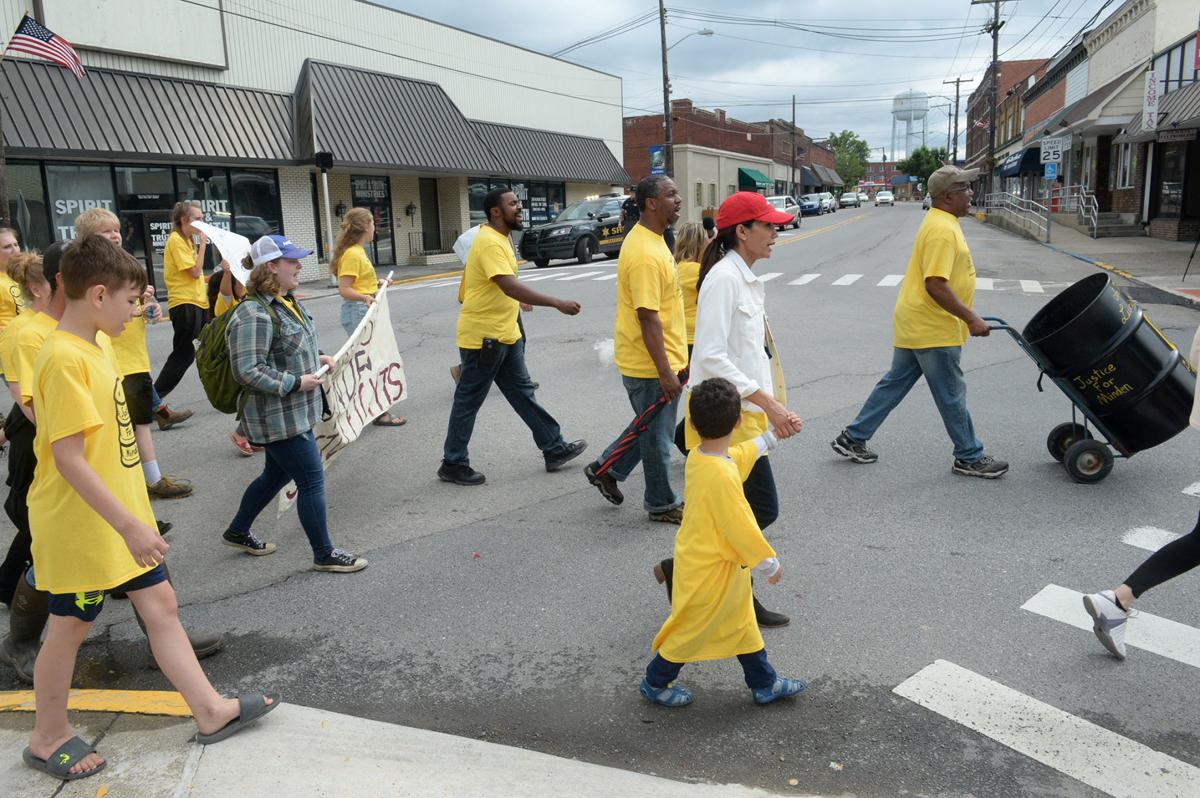 The March for Minden parades through Oak Hill on its way to the City Park Saturday.

Residents parade through Minden, in Fayette County, on Saturday to mark the 30th anniversary of the first March for Minden in 1989.

A resident of Minden raises his fist and his cane as the marchers go by his house on their way to the city park in Oak Hill.

As the marchers cross an overpass entering Oak Hill, two of the participants unfurl a banner for passing motorists to see.

The March for Minden parades through Oak Hill on its way to the City Park Saturday.

MINDEN — “What do we want? Justice for Minden!” they chanted. “When do we want it? Now!”

On Saturday in the small Southern West Virginia community of Minden, residents who have long suffered the damaging consequences of toxic pollution took to their streets on the 30th anniversary of the first March for Minden.

They first marched in 1989, an effort by the community to bring awareness to issues residents were facing due to the presence of polychlorinated biphenyls, also known as PCBs, in the area.

Now 30 years later, residents continue to deal with many of the same issues, and are again looking to bring attention to their struggling community.

For 14 years, Minden, in Fayette County, was the site of the Shaffer Equipment Company, which built electrical equipment for the coal industry that once dominated Southern West Virginia.

Oil that contained PCBs was used in the production of transformers and other equipment. That same oil seeped into the soil in the small town, turning it into a place of toxicity.

PCBs have been linked to a variety of cancers, as well as cardiovascular, gastrointestinal, immune, musculoskeletal and neurological issues in humans when they are exposed for extended periods of time. For Minden residents, these health issues are seen on a daily basis.

Susie Worley-Jenkins, one of the main organizers for the march, has lived in Minden for 65 years and has seen first-hand how the contamination of her hometown has left community members literally fighting for their lives.

“I lost my mother, I lost my father, I lost my cousin who was raised like my brother, I lost two friends with brain tumors, I lost my best friend to cancer and I lost a lot of people that I went to school with,” she said. “I spent more time going to funerals than I did visiting my family because it was that bad.”

Worley-Jenkins said the last head count that was taken on Minden residents who had succumbed to illnesses related to PCB exposure was 447. The town now has a population of around 250, and many want to be relocated someplace where the water and soil aren’t filled with toxins.

It’s been over 30 years since PCBs were first discovered in Minden in 1984, after the federal government banned them just five years earlier. Since then, the U.S. Environmental Protection Agency has been in and out of the community trying to clean up the mess, but for many residents, nothing has changed.

“I moved to Minden when I was 18 years old; I’ve lived here since 1989,” Kim Duncan, another resident, said. “I remember the EPA trying to clean it up in hazmat suits, machines and stuff because I lived right beside it.”

Duncan said she has lost many of her family members to cancer due to their exposure to the hazardous PCBs. Even her pets, three dogs and a duck, were diagnosed with cancer and died.

“I had cancer, and I took my treatments and all that, and it really ruined my body,” she said. “My husband has to have skin cancer removed every so often.”

She said she fears for her grandchildren’s lives and won’t let them come to her house to play because of the chance they could be affected by the PCBs.

The effects of toxins are not limited to the community’s older population.

Annetta Coffman, another march organizer, has had all of her neighbors die of cancer. Her mother died in 2007, and in 2015 her 18-year-old son was diagnosed with a malignant brain tumor. Last year, her father died.

The first march happened when she was 14 years old, and she said she really didn’t understand what was happening at the time. Now, though, she said she hopes this march brings to light the issues Minden is still facing and the help the community still needs.

“I hope that we bring awareness to the issues, that people can respect what we’re doing, and maybe get educated on what happened in the ’80s and continues to happen now,” she said. “Then, maybe we can get a better support system, and I think when you get support from outside, that helps a lot.”

Last month, Minden did get some of that outside support from the federal government when the town was officially added to the EPA’s National Priorities List of Superfund sites, which makes it a federal priority for enforcement, cleanup and funding.

Worley-Jenkins was at the meeting where EPA Administrator Andrew Wheeler announced the addition of Minden to the Superfund list. Rep. Carol Miller, R-W.Va., and Sen. Shelley Moore Capito, R-W.Va., joined Gov. Jim Justice in addressing the residents; however, Worley-Jenkins isn’t so sure things are going to change for her and her neighbors.

“They talk a good talk, but let’s see if they’re going to do what they say because I don’t believe nothing,” she said. “The EPA and [Department of Environmental Protection] has failed us three or four times and lied to us. They didn’t do nothing for us.”

On Saturday, more than 50 residents and allies of the community marched the original route taken by marchers in 1989, starting at the old coal company store and ending almost 3 miles away at Oak Hill City Park, where an assembly of speakers addressed the crowd.

At dusk, the marchers lit candles and stood in quiet remembrance to honor their fellow community members who have passed from the PCB contamination that is still present more than three decades later.

Many Minden residents are no longer looking for their town to be free of contamination, but are instead looking to be relocated elsewhere, as many believe there is no way for the town to ever be 100 percent free from the grip of the toxic chemicals.

“I think that’s the right thing to do,” said Coffman. “They should’ve done that a long time ago, and I think that a lot of lives would’ve been saved in the process.”

Coffman herself wants to relocate, but like other residents, she has a mortgage on her home and can’t just leave with that debt still owed.

Duncan faces the same problem, so she’s stuck in the town that she said is killing her family and friends.

“Minden was once all family, close friends and neighbors, and now they’re all gone,” she said. “It’s just sad to live here.”