Newspapers’ fortunes and those of the communities in which they are located long have run parallel to one another, as they have to that of the country’s vicissitudes, both economic and visceral.

That history has been altered over the past 15 years, during which newspapers began, to borrow melodramatically from author Edward Raymer, a descent into darkness. Industrywide, revenue has been more than halved since 2006. Advertising has been particularly affected.

Our detractors long have been legion but seem to have multiplied in equal proportion to our financial suffering. Everyone’s a critic when you lose your mojo. Invariably, editors hear about the heyday of the newsrooms they now lead. People recall eras when a given paper’s greatness was ostensibly unquestioned. Now, longtime editors are issuing the same laments while watching once-mighty titans of the industry wither. “That was a great paper once ...” Some of those papers are gone altogether. Others are sure to follow.

A plague of the moment is that everyone seems to know everything, including all the reasons newspapers have stumbled into this state. The loudest refrain is that they’re too damn liberal. Other armchair experts trot out banalities. Newspapers are the buggy-whip makers in the era of combustion engines. They didn’t adjust to the internet. Still others hearken to a bygone heyday when all the editors were brilliant and every reporter was the second coming of Bob Woodward and Carl Bernstein. The local paper crumbled to pieces when this editor or that one walked out the door. Now look at it.

Few people seem interested in facts at a time when social media gives everyone a voice no matter how shrill or disconnected from functioning intellect. But those antediluvian enough to think facts matter might consider these:

Print circulation long has been in freefall, but not digital audience. Total weekday circulation for all U.S. newspapers slipped to 28.6 million in 2018 from a peak of 63.3 million in 1984. Recent figures are unavailable but, in 2015, newspapers’ online audience reached a record 173 million, according to data cited by the Newspaper Association of America, the industry’s largest trade group, now known as the News Media Alliance.

These statistics indicate newspapers are drawing more, not fewer, people to their work, even with newsroom employment cut by half since 2009.

Online readership for newspapers has not translated into profitability. Advertising revenue industrywide tumbled from nearly $50 billion in 2005 to $14.3 billion in 2018, according to the Pew Research Center. Print advertising was decimated, plunging from $47.4 billion to roughly $12.5 billion over the same period.

While digital audiences grew, digital advertising did not keep pace, inching past $4 billion by 2018 from $2 billion in 2005. That same year, Google nearly doubled its total revenue, to $6.1 billion. Another player in the digital ad market, Facebook, was in its infancy. Today, those two combined bring in more than $200 billion annually. They gobble up 77% of the local digital ad market, compared to 58% nationally, according to Borrell Associates and eMarketer. The effect of this is suffocating for local news organizations. Thousands of them are scrambling for scraps. There is not enough for all to survive. 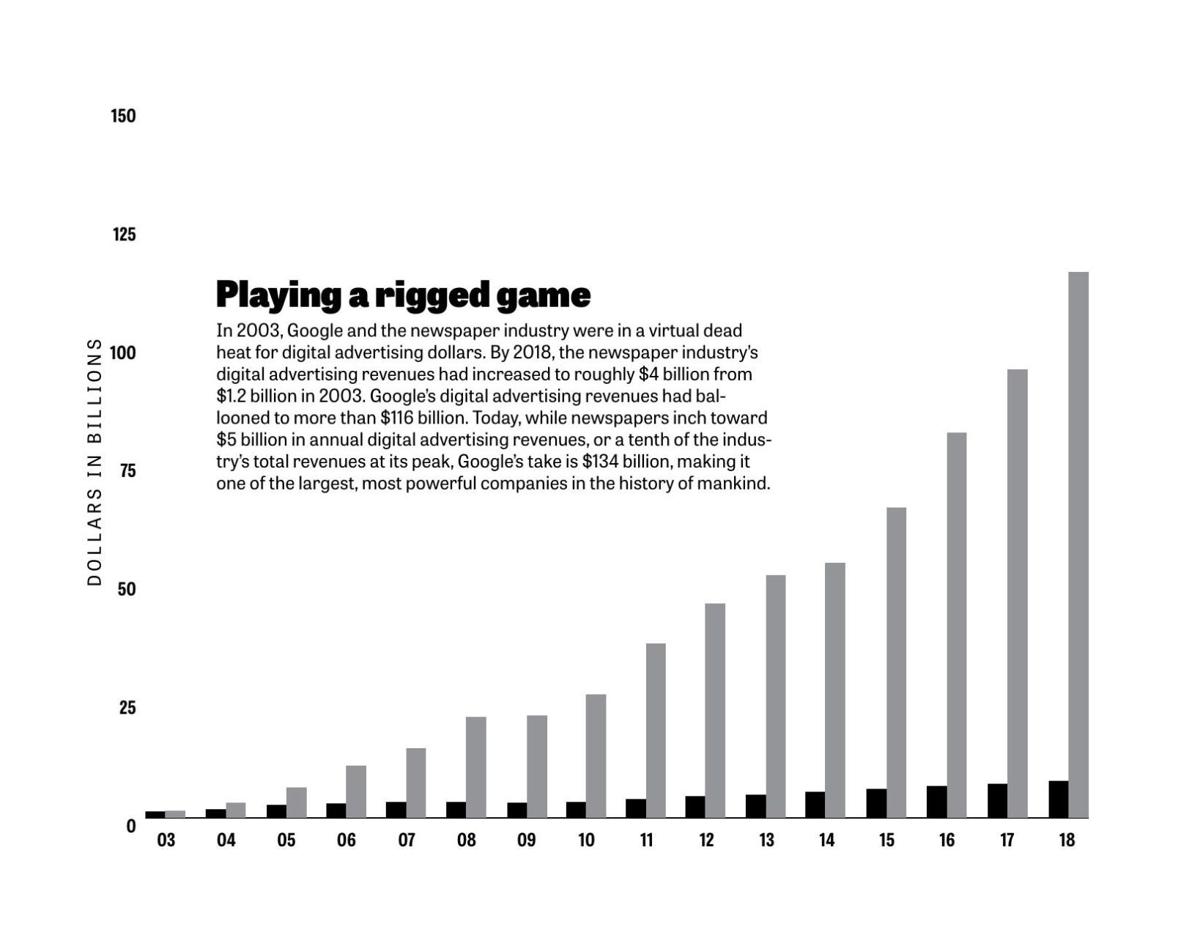 Terry Kroeger, the former CEO of BH Media, my former employer, told The Wall Street Journal in 2019: “You can’t help but admire Google’s business model. They have close to zero content-creation cost but are able to turn around and sell the lion’s share of the advertising.”

HD Media, my current employer, has filed an antitrust claim against Google and Facebook. Publishers of 125 newspapers in 11 states announced Monday that they also have sued or plan to do so. The Daily Mail, the London paper that purchased the domain name of the former Charleston Daily Mail, filed a claim the following day.

These are what another author, Timothy Egan, would call the worst hard times for our industry. Nonetheless, we are confident our best days are ahead. Like our state and her people, we are strong, proud and resilient. We are steeled by adversity, rather than cowed by it.

So stand with us. Give us hell when we deserve it. Hold us accountable, and demand that we hold people in public office accountable. It’s still our job, and we believe in it. Insist and expect that we vigilantly fill the role of public watchdogs in our communities, that we accurately present a sense of the place we all call home. But also support us and newspapers and journalists across the state and across America.

Just as we need people to clean and police our streets, we need journalists to diligently cover our cities and state, to show us the rights and wrongs not of Washington, but of our hometowns and West Virginia. Who will do it if journalists do not? And if they do not, what becomes of this place?

Lee Wolverton is vice president of news and executive editor of HD Media.