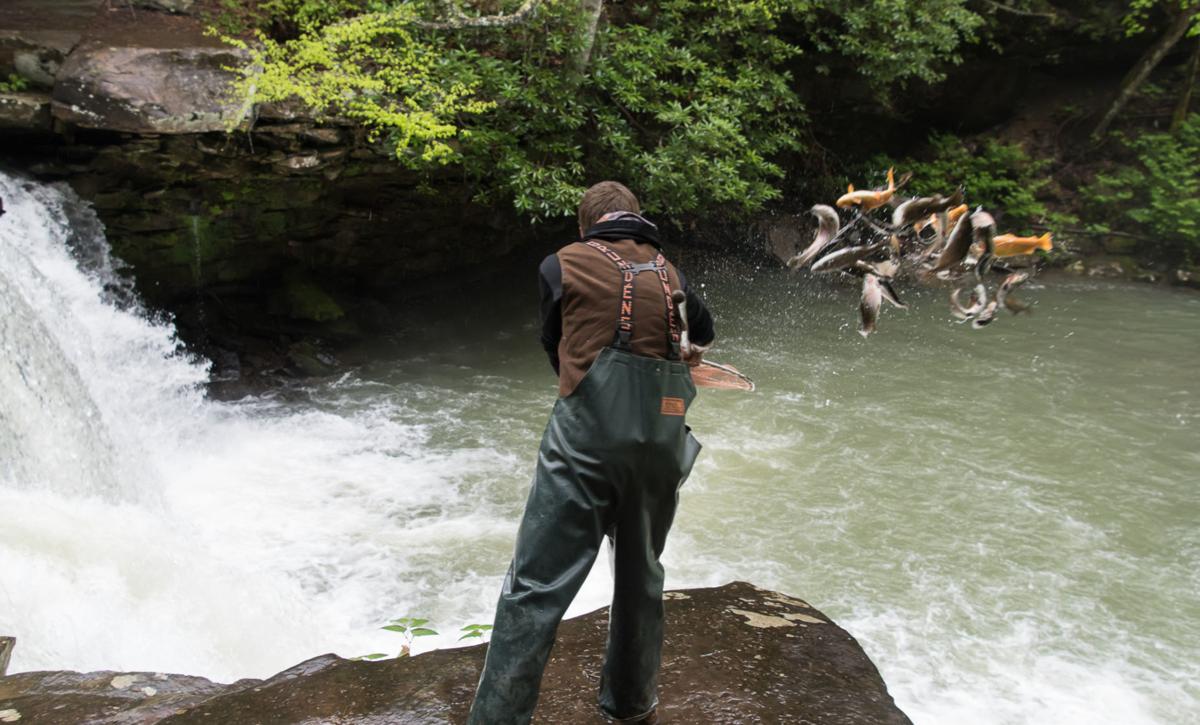 On some remote streams, such as Fayette County’s Mill Creek, there are no crowds of anglers from which DNR laborer Chad Friel must distance himself while stocking trout. On busier streams, DNR officials send Natural Resources Police along to ensure proper COVID-19 social distancing. 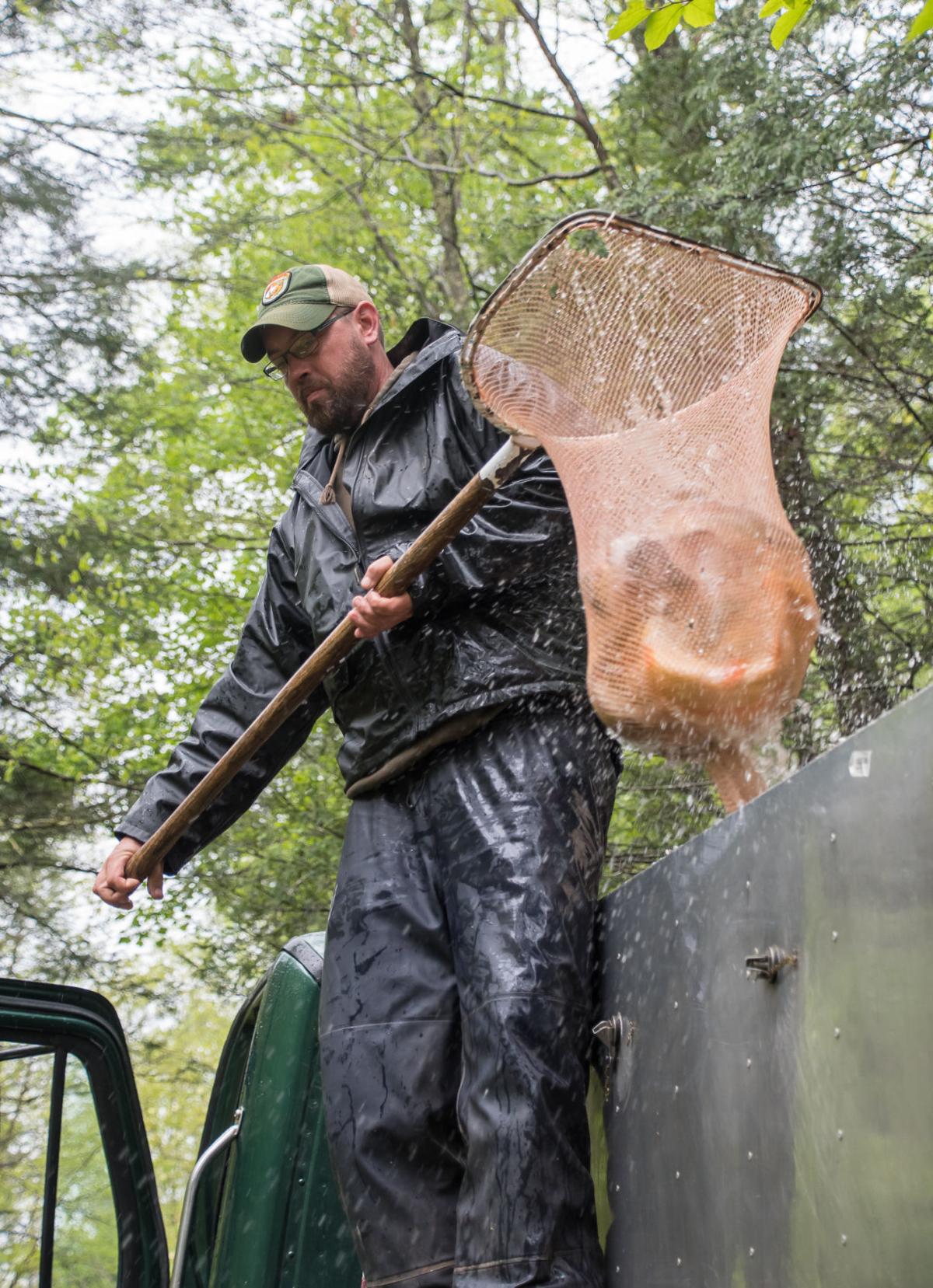 Tom Provezis, a technician at the DNR’s Edray Trout Hatchery, says stay-at-home orders due to the COVID-19 virus are part of the reason he’s seeing more anglers along the streams. 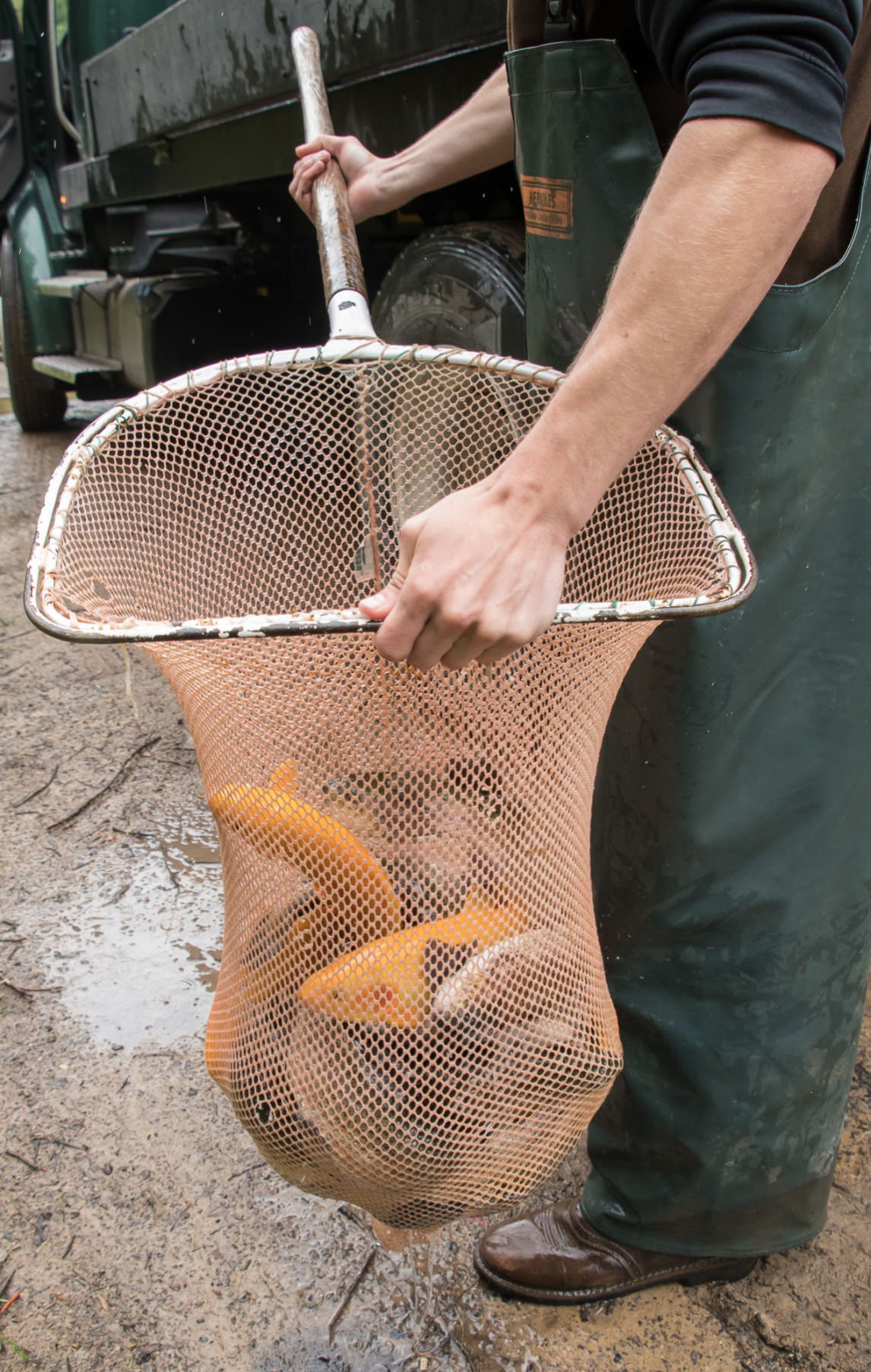 On some remote streams, such as Fayette County’s Mill Creek, there are no crowds of anglers from which DNR laborer Chad Friel must distance himself while stocking trout. On busier streams, DNR officials send Natural Resources Police along to ensure proper COVID-19 social distancing.

Tom Provezis, a technician at the DNR’s Edray Trout Hatchery, says stay-at-home orders due to the COVID-19 virus are part of the reason he’s seeing more anglers along the streams.

ANSTED — COVID-19 restrictions may have shut West Virginia down, but it didn’t shut down the state’s trout-stocking efforts.

Day after day throughout the height of the crisis, hatchery trucks loaded with brook, brown, rainbow and golden trout crisscrossed the state, bringing outdoor recreation to people who would otherwise have stayed hunkered down in their homes.

Tom Provezis, a technician at the state’s Edray Trout Hatchery near Marlinton, said he’s seeing “a lot more” people along the streams he stocks.

“Overall, I don’t remember ever seeing this many people out fishing,” he said.

Under those guidelines, most stocking trucks were accompanied by Natural Resources Police officers, who kept anglers from crowding around the workers bringing trout to the streams, and ordered anglers to stay at least 6 feet apart while fishing.

In addition, the DNR suspended its long-established practice of publishing the names of streams stocked that day — an action designed to prevent anglers from anticipating when their favorite streams would be stocked.

Provezis said the measures seem to be having the desired effects.

“We’ve had law enforcement cars following us on about 95 percent of our runs,” he continued. “Having them there has really helped hold down the number of ‘truck followers,’ and the officers are making sure the people who are there fishing give us the space we need to do our thing.”

After the trout are stocked, anglers are free to move in and fish for them. Provezis said, however, that they don’t seem to be crowding one another as much as they did before COVID-19 became an issue.

Jim Hedrick, the DNR’s supervisor of hatcheries, said Provezis’ feelings toward the new stocking routines are pretty typical throughout the system.

“The reason we set up these guidelines was to make sure that each of our employees was personally comfortable with the social distancing they were likely to experience during [stocking] events,” Hedrick said.

“The folks in the field tell me they’re very comfortable. They’re not getting their personal space violated, and they’re really pleased with that aspect of it.”

“We’ve done a lot of advertising and promotion to make people aware of our trout-fishing program,” he added. “Even without COVID-19, we would have expected to see more people out fishing this spring.”

Hedrick is also not surprised that his drivers aren’t seeing as many truck-followers as usual.

“Part of that is the law enforcement presence, but in the big picture of the trout program, we haven’t been getting as many truck followers in recent years,” he said.

“Cellphone communication is so good, people don’t have to line up behind the truck and follow it. Now people can figure out where the truck is just from the people who see the truck and text all their buddies.”

Hedrick estimated that half the people who follow the trucks don’t intend to fish.

“A lot of folks have the idea that people follow the trucks just so they can jump out of their cars and catch all the fish before anyone else gets a chance to fish for them,” he explained.

“That isn’t always the case. Some people follow the truck just to observe the stocking procedure. Sometimes they don’t even get out of their cars; they just follow along from one stocking point to the next.”

Hedrick said that with more people on the streams, angler ethics become more important than ever.

“At a lot of the sites we stock, we’re only there because landowners allow us to be,” he said. “People who fish at these places need to be careful not to do anything that might upset the landowners.

“They should avoid littering, riding down fences, and parking where they’re not supposed to park. If they do that, these stocking sites will remain open to the public well into the future.”

From amore to l’amour: Discover your language of love

If you own a business, you’ve only got days left to apply for a Paycheck Protection loan