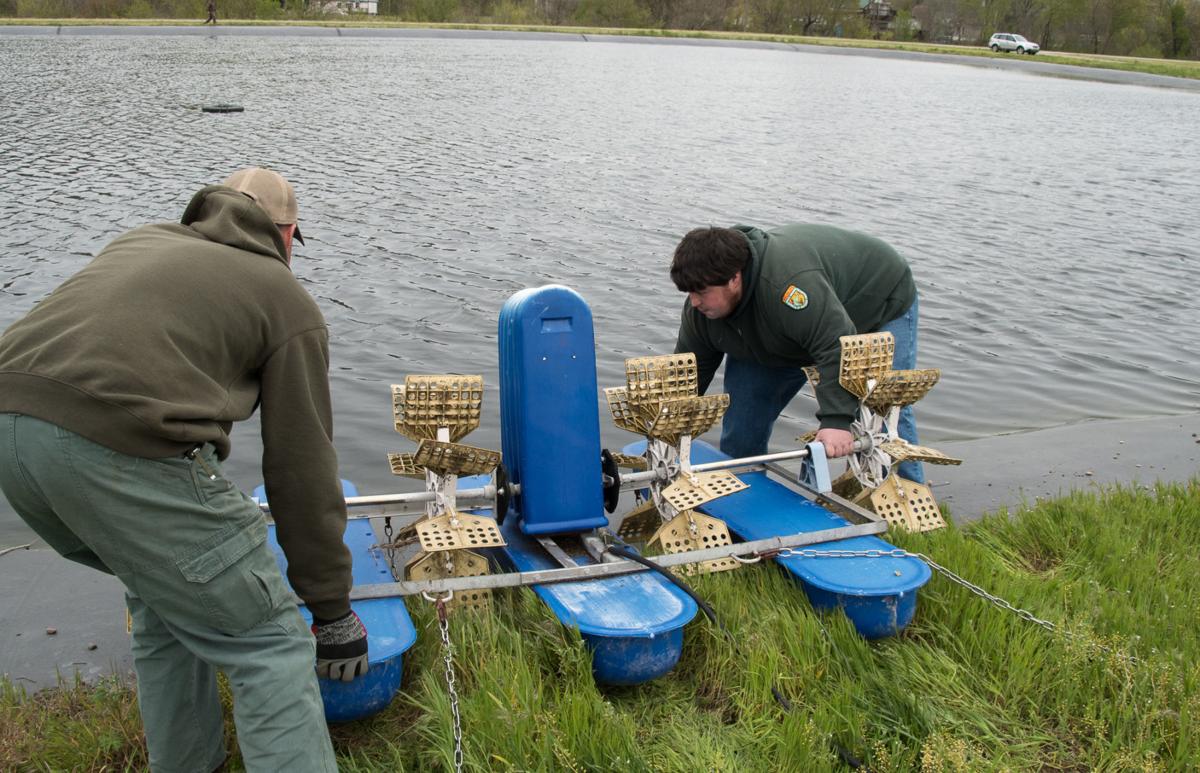 Maintaining the prescribed 6-foot “social distance” isn’t always easy for West Virginia’s fish-hatchery workers, but they do their best. Fortunately for Apple Grove Hatchery’s Ryan Bosserman (left) and Travis Bloomer, the aerator they installed in one of the facility’s catfish ponds happened to be just long enough to keep them safely apart. 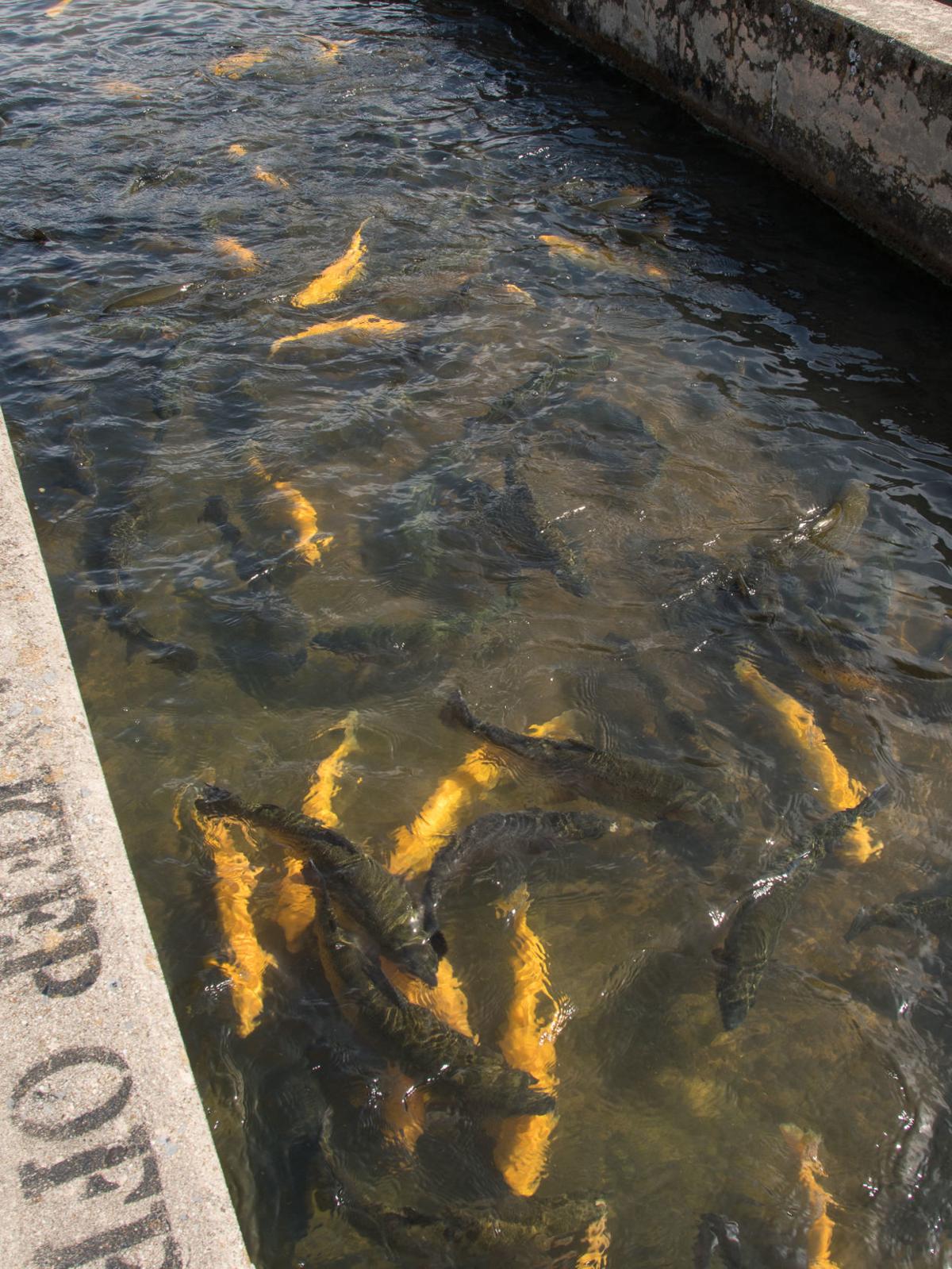 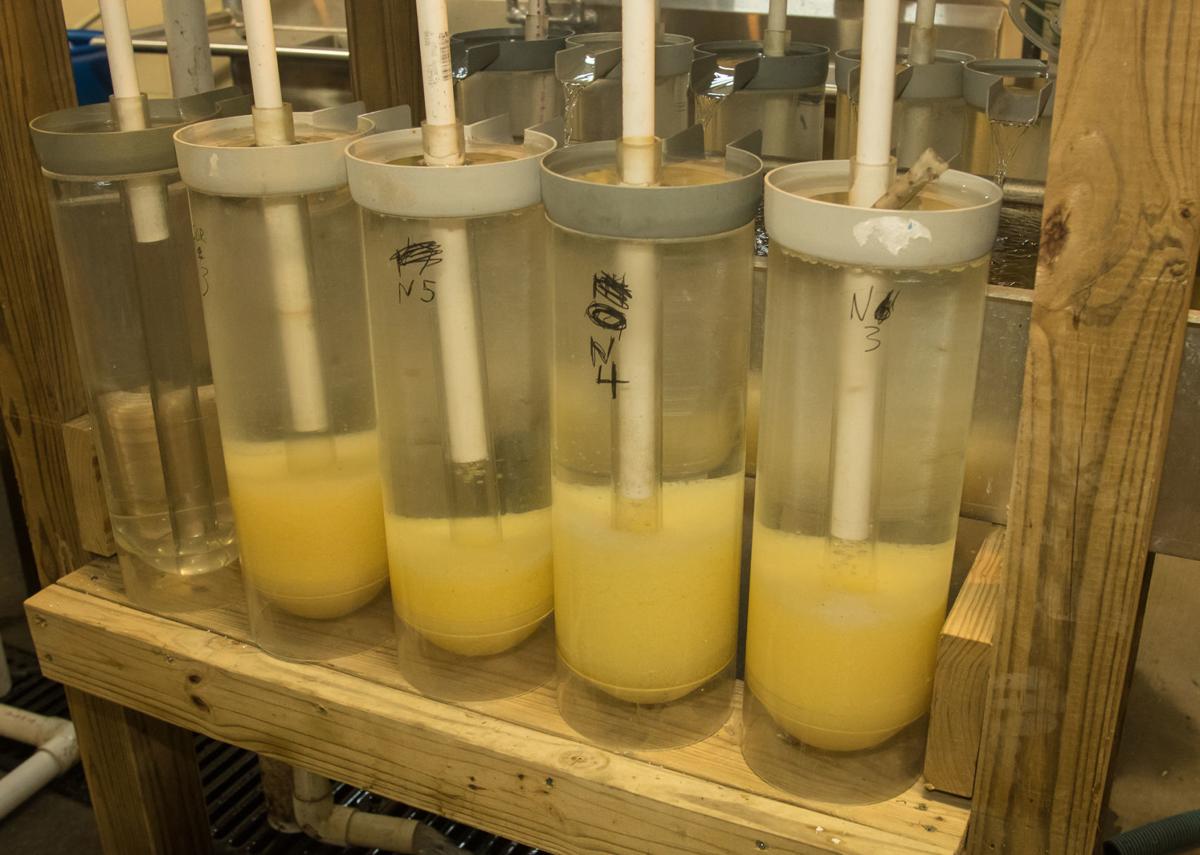 At the Apple Grove hatchery, workers were able to collect walleye eggs from fish captured from the wild, but they didn’t get as many as they wanted because stay-at-home and social-distancing orders wouldn’t allow them to collect more brood fish.

Maintaining the prescribed 6-foot “social distance” isn’t always easy for West Virginia’s fish-hatchery workers, but they do their best. Fortunately for Apple Grove Hatchery’s Ryan Bosserman (left) and Travis Bloomer, the aerator they installed in one of the facility’s catfish ponds happened to be just long enough to keep them safely apart.

At the Apple Grove hatchery, workers were able to collect walleye eggs from fish captured from the wild, but they didn’t get as many as they wanted because stay-at-home and social-distancing orders wouldn’t allow them to collect more brood fish.

APPLE GROVE — Apart from a sign on the gate saying the facility is closed to visitors, business at West Virginia’s Apple Grove Fish Hatchery goes on as usual.

Employees still feed fish, monitor oxygen levels in the water, maintain equipment and mow grass. In the age of coronavirus, however, they try not to get close to one another.

“It’s a big facility, and we really don’t have very many employees,” said Ryan Bosserman, the hatchery’s manager. “There’s really just me, my assistant, and two part-time seasonal workers. I’m having the seasonal guys work on alternate days to minimize the number of people on the grounds at one time.”

The sprawling complex, located alongside the Ohio River near the Robert C. Byrd Locks and Dam, has 34 fish-rearing ponds that cover 43 acres. Bosserman said there’s plenty of room for social distancing.

“At this time of the year, the grass is always growing,” he said. “Once we tend to the fish, we can all socially distance by getting on our lawn mowers and cutting the grass in different parts of the hatchery.”

Almost all of the state’s seven trout hatcheries are more compact than Apple Grove, but Jim Hedrick, the Division of Natural Resources’ supervisor of hatcheries, said the nature of a trout hatchery makes it easy to keep employees apart.

“At this time of the year, with trout stockings going on, most of the employees are out driving the stocking trucks,” he said. “After the trucks leave for the day, there usually are only two people left to run each hatchery. One works outside with the mature fish, and the other works inside the hatchery building with the young fish.”

Hatchery personnel are considered essential because the fish they care for would die if they were left alone. In the case of trout hatcheries, the stockings have to take place in order to clear out the mature fish so that next year’s fish, hatched months ago, can be moved out of hatchery buildings and put into large “raceway” troughs where they’ll have room to grow to adult size.

Government-imposed restrictions haven’t had much effect on the hatcheries’ day-to-day operations, but they’ve had an impact on some of the associated logistics.

For example, Hedrick said he’s having to scramble to find sources of trout food. With factories closed by stay-at-home orders, the supply of available food is dwindling. Hedrick said West Virginia’s system has enough to last through the end of May, but after that is a question mark.

“We trade fish with other states,” he explained. “We usually get muskies from Kentucky and striped bass from Maryland.

“In Maryland, they couldn’t collect fingerlings for us because it would force employees into close proximity with one another. In fact, they couldn’t even spawn their adult stripers because it takes two people to hold onto a single 40- to 50-pound bass. The folks in Kentucky were in the same boat with their muskies.”

West Virginia gets its walleye eggs from fish captured in Mountain State waters, but Bosserman said social-distancing guidelines didn’t allow DNR personnel to collect as many egg-producing females as they wanted.

“We got some brood stock in early March, and we took DNA samples from them to determine which of the fish were of the Eastern Highlands strain we prefer to raise” he said.

“We got the genetics back from West Virginia University just before the stay-at-home order went into place. We wanted to go out and collect more brood stock, but we couldn’t because of the social-distancing orders. We ended up getting some walleye eggs from the brood fish we collected, but we would have preferred to have gotten more.”

Those eggs have since hatched, and the walleye fry are growing. The hatchery routine rolls on.

“The fish aren’t affected by the virus,” Bosserman said. “They don’t know when it’s a weekend or a holiday, or even when it’s raining out.

From amore to l’amour: Discover your language of love

If you own a business, you’ve only got days left to apply for a Paycheck Protection loan