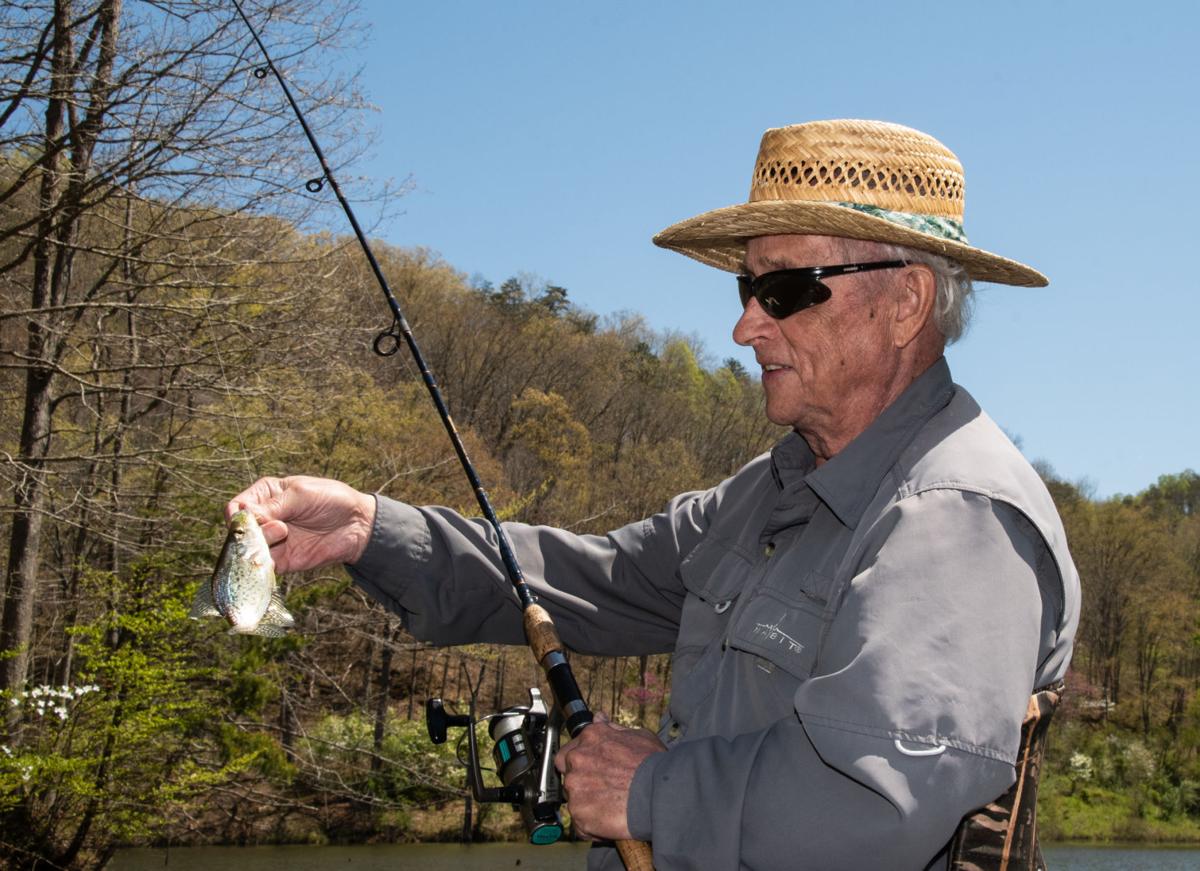 Though he probably catches more than his share of slab-sided crappie, retired fisheries biologist Bernie Dowler catches plenty of runts, too. Most of the fish he keeps for the pan run 10 to 11 inches in size, which he considers perfect for filleting and eating. 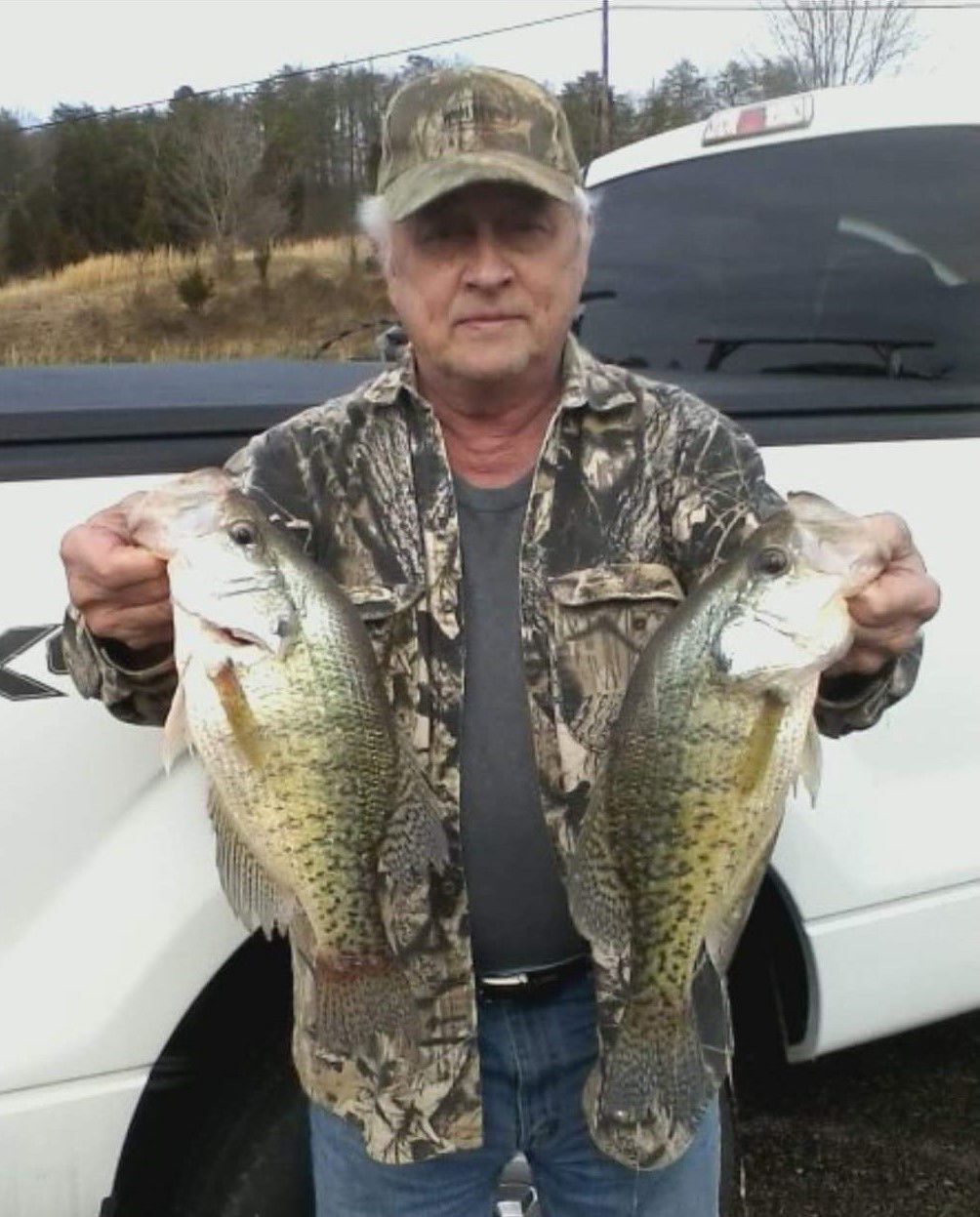 By working his lures around sunken treetops and brush piles, Dowler often brings home a couple of “slab” crappie in the 14- to 17-inch range.

A small jig, suspended below a slip bobber, is Dowler’s go-to method for catching crappie. 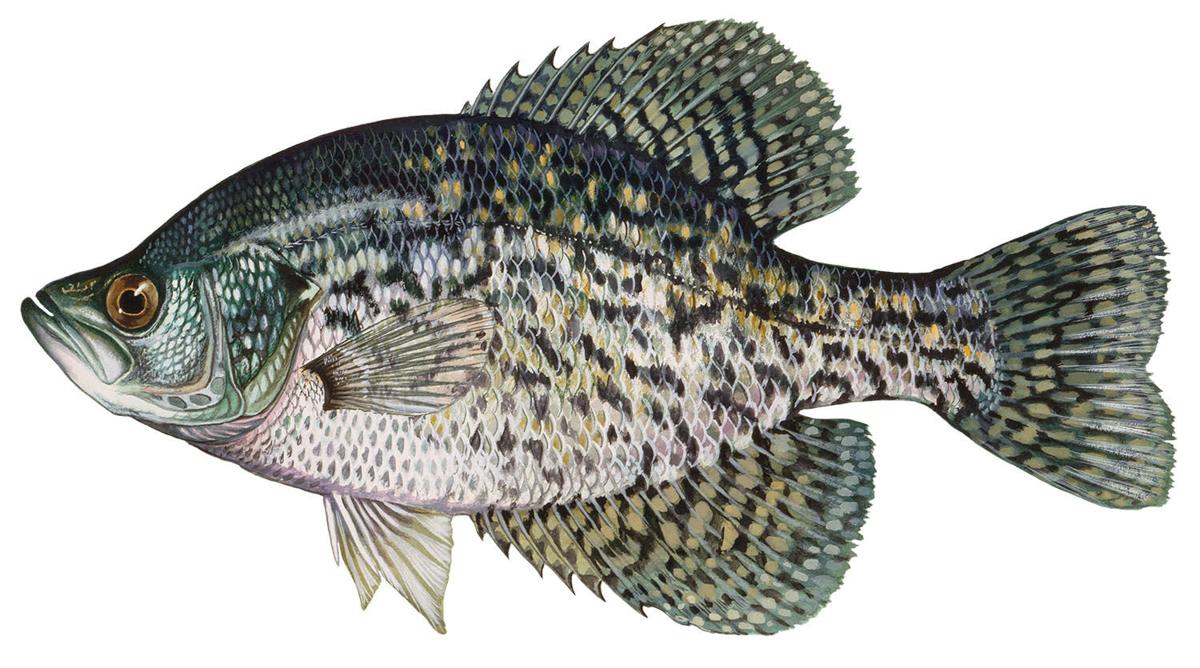 Though he probably catches more than his share of slab-sided crappie, retired fisheries biologist Bernie Dowler catches plenty of runts, too. Most of the fish he keeps for the pan run 10 to 11 inches in size, which he considers perfect for filleting and eating.

By working his lures around sunken treetops and brush piles, Dowler often brings home a couple of “slab” crappie in the 14- to 17-inch range.

A small jig, suspended below a slip bobber, is Dowler’s go-to method for catching crappie.

KENTUCK — The sight of redbud and dogwood trees blooming causes lots of West Virginians to think about turkey hunting.

It makes sense. Dowler likes to hunt, but he spent most of his career working with fish. Over the years, he developed a particular fondness for the humble crappie.

“One of the reasons I like crappie so much is actually pretty childish,” Dowler said. “I like watching that bobber go under. I don’t know of anything more exciting than knowing there’s a fish pulling that bobber down.”

There’s more to it than that, of course. Listen to Dowler for a few minutes and you’ll hear several more reasons he spends so much time pursuing fish that, in West Virginia, usually weigh 2 pounds or less.

“I like to eat fish, and crappie are one of the best-tasting fish we have,” he said. “They’re extremely abundant in most waters. And they tend to hang together; if you catch one, chances are there are plenty more around.”

In the spring, when water temperatures rise toward 65 degrees, crappie move into shallow water to spawn, usually around sunken logs or brush piles. Dowler said it’s the time of year when they bite most aggressively.

“The timing of the pre-spawn and spawning phases correlates strongly with day length,” said the former Division of Natural Resources fisheries biologist. “A good sign that crappie are getting ready to spawn is the appearance of the first redwood blooms.

“If you see the redbuds in bloom, and if you get a couple of nice days in a row when the air temperature is in the 70- to 80-degree range, you can figure that crappie are moving into shallower water. For the next few weeks, while the redbuds and dogwoods are blooming, the fishing tends to be prime.”

This year, oddly enough, has been an exception. Cold nights have kept water temperatures from rising into their normal range. Dowler said that so far, there have only been a couple of days when temperatures were near optimum.

“We haven’t gotten into a really good stretch of consistent weather,” he said. “We will, though, as the days get a little bit warmer.”

When conditions are ideal, Dowler said it’s not unusual to catch 20 or more crappie from a single sunken treetop or brush pile.

“It’s not like muskie fishing; you’re not going out there hoping to get just one strike a day,” he added. “You’re probably going to catch 20 or 30 or whatever, and keep a few of those for the frying pan.”

He considers crappie in the 10- to 11-inch range to be the best table fare. Most run a bit smaller than that, but once in a while an even bigger one happens along.

“I occasionally will catch a 16- or 17-inch crappie, and they’re almost always females,” Dowler said. “I usually turn them back, simply because 10- to 11-inchers make better eating.”

Many anglers use ultralight spinning tackle when they fish for crappie. Dowler prefers long, light-action rods strung with 8-pound-test monofilament line. The longer rods allow him to reach deep down into the water to dislodge snagged lures.

Dowler’s terminal tackle is simple, yet effective — a small grub or paddle-tail jig with a slip bobber strung onto the line above it. He places one bobber stop about a foot above the jig, and another above the bobber. By sliding the upper stop up or down, he can control the depth at which he fishes the lure.

Most of the time, he flips or pitches the rig to land close beside the cover he wishes to fish. The weight of the jig pulls the line through the slip bobber until the upper bobber stop halts it at the desired depth. By raising and lowering the rod tip, Dowler is able to make the jig dance enticingly.

“If I want to make another cast, the slip bobber also allows the jig to rise vertically through the cover, which helps prevent hang-ups,” he said.

When he catches a crappie he wants to keep, Dowler puts the fish in his boat’s aerated live well and keeps it there until he’s ready to leave for home.

“Before I leave, I put the fish into a cooler and cover them with ice,” he said. “I leave them there until the next morning, when I filet them.

“After they’ve chilled down, their flesh becomes firmer and they’re a lot easier to filet. I put the filets into a container of water with ice cubes in it, and I leave them there for an hour or so. Then I rinse them and freeze them in vacuum-sealed bags.”

Dowler’s approach prevents freezer burn. He said he’s eaten filets that were still “excellent” after being frozen for 5 years.

Not only was the flesh still firm and flavorful, it reminded him of warm spring days when redbuds and dogwoods were in bloom, and of the many magical moments when he watched that bobber dance for a moment and then go under.