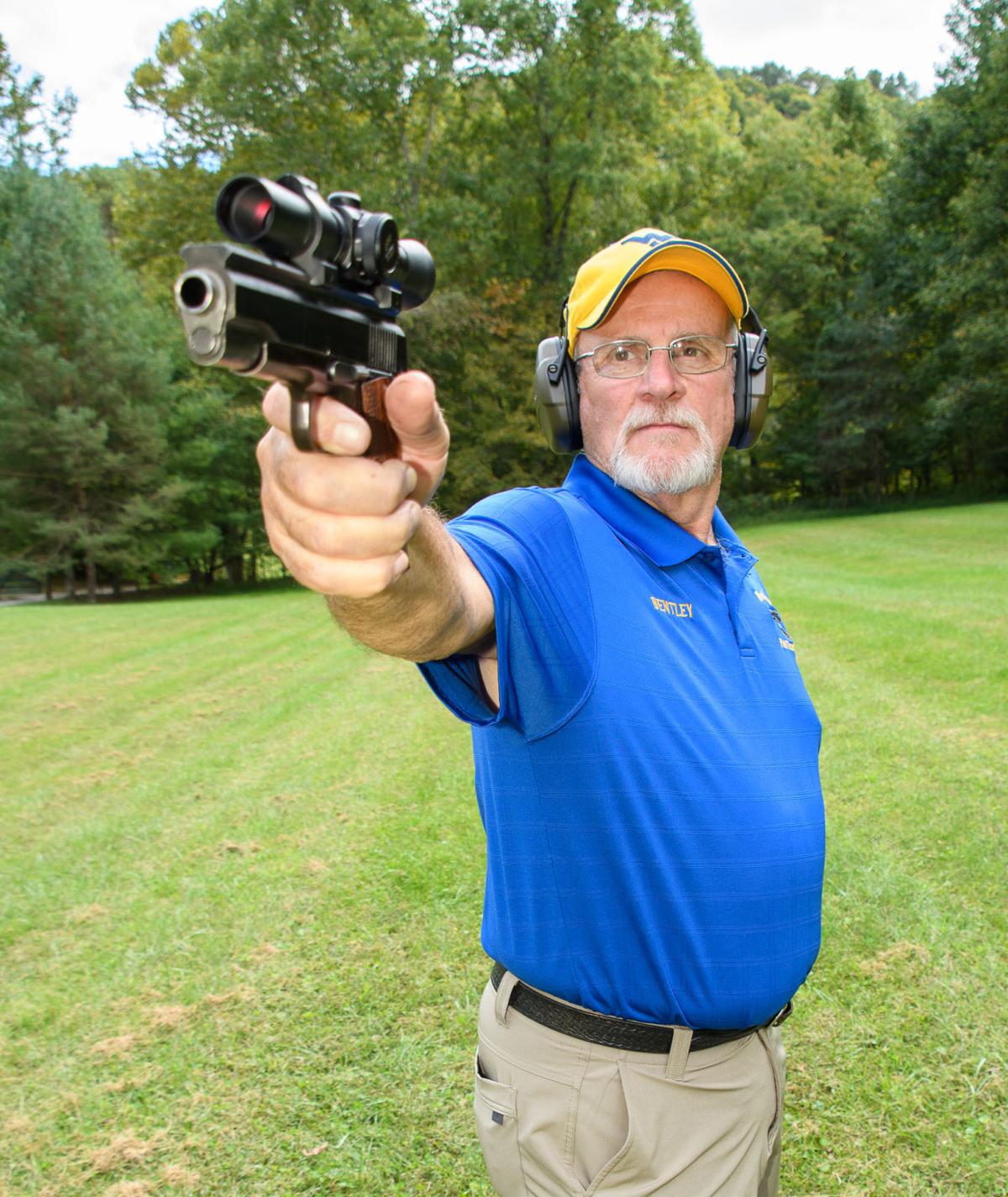 Though he shot relatively poorly in the first two segments of the recent West Virginia Precision Pistol Championships, Mark Bentley returned to form in the final segment to capture his fourth state title in the past five years. 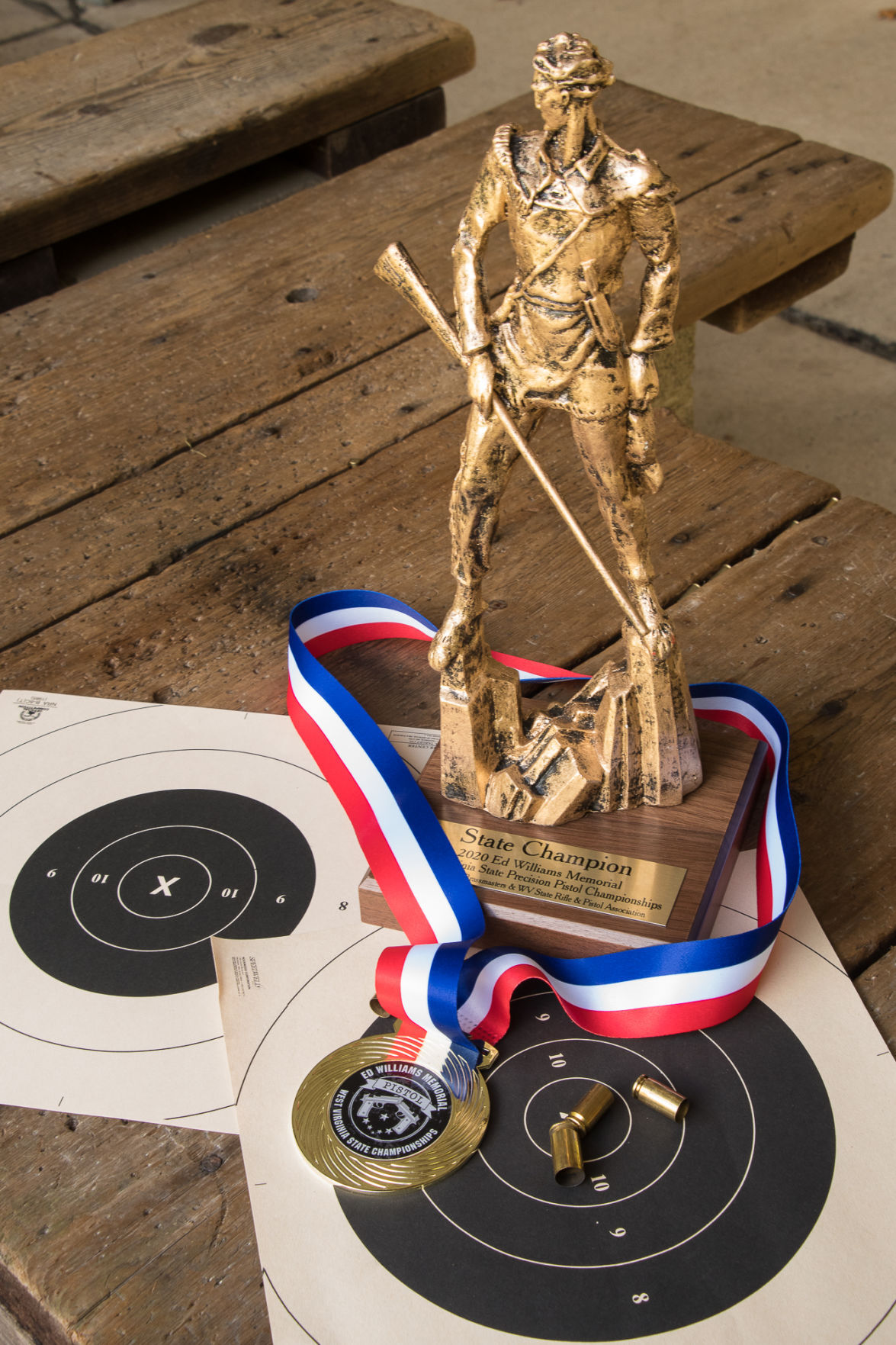 The prizes Mark Bentley brought home after his most recent championship include a gold medal and a trophy in the image of a mountaineer.

Though he shot relatively poorly in the first two segments of the recent West Virginia Precision Pistol Championships, Mark Bentley returned to form in the final segment to capture his fourth state title in the past five years.

The prizes Mark Bentley brought home after his most recent championship include a gold medal and a trophy in the image of a mountaineer.

BARBOURSVILLE — After he retired from his day job, Mark Bentley decided to try his hand at competitive shooting.

That hand proved to be pretty darned steady.

Earlier this month, Bentley won the West Virginia State Precision Pistol Championship for the fourth time in the past five years.

“Precision pistol is either something you love, or it’s something you don’t want to mess with,” he said. “It’s not an easy discipline to learn.”

It took Bentley a while to enjoy success. He took up the pastime shortly after he retired in 2008, and began competing in local tournaments.

“Back then, I really couldn’t hit a bull in the butt with both hands,” he said. “But with trigger time and a lot of mentoring from veteran pistol shooters, my scores improved.”

Bentley learned he’d have to shoot — a lot. A full precision pistol match requires each shooter to fire 270 shots.

“Each discipline takes about 2 hours to shoot,” Bentley said, “so you’re looking at 6 hours of shooting in a [2,700-point] match.”

Hours spent in competition are a drop in the bucket compared to the hours Bentley spends practicing. He shoots at two ranges near his Barboursville home, and he’s built a private range in a hollow near his house.

That practice paid off Sept. 19 and 20, when he stepped to the firing line at the White Horse Firearm and Outdoor Education Center, near Buckhannon, to compete for this year’s state championship.

“I started off slow,” he said. “I was ahead during the .22 portion of the match, but the second- and third-place guys were right on my heels.

Bentley’s scores of 839, 829 and 848 for the three disciplines allowed him to outpace B.J. King and Vern Reichenbecher, both of whom also hail from the Huntington area. Staying focused for 6 hours can be mentally taxing. Holding a pistol with one’s arm extended horizontally 270 times can be physically taxing. For those reasons — and because equipment and ammunition costs tend to add up quickly — not many young people are entering the sport.

“A lot of us who shoot precision pistol here locally are older folks,” Bentley said. “We’d really like to get some young people to come out and shoot with us.”

The Putnam County Gun Club holds monthly precision matches at its range near Eleanor from April through October. Bentley said the next match is scheduled for 9 a.m. Oct. 11.

“They offer a new-person deal where beginners are allowed to shoot .22 for all three disciplines,” he added. “That allows folks to get a feel for the competition without having to invest a lot of money into it.”

As for Bentley, he plans to keep shooting for as long as he can.