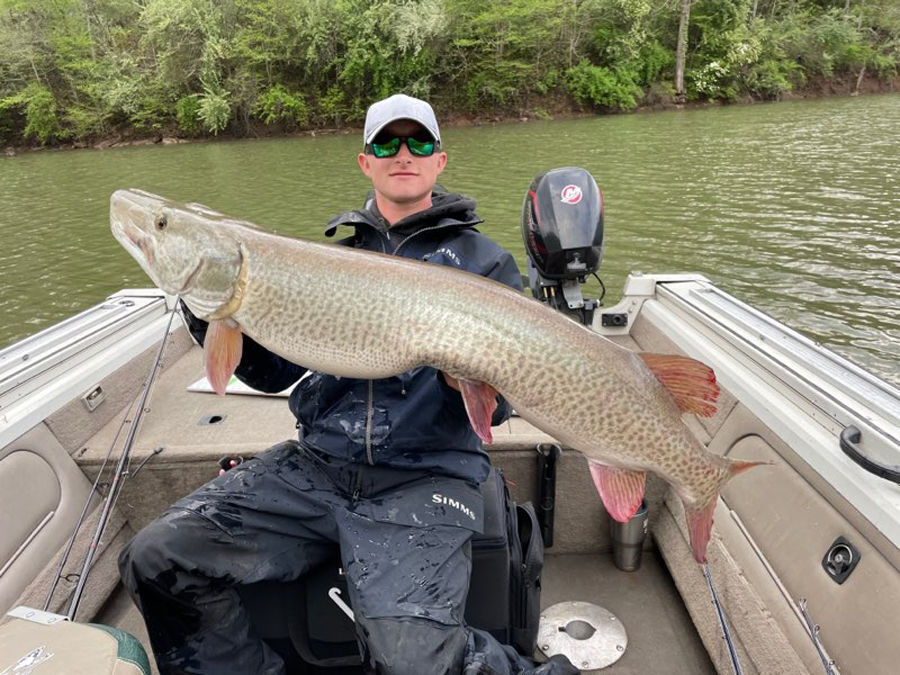 On a day off from his job as a muskie guide, Chase Gibson and a buddy decided — what else? — to go muskie fishing. Good choice. Minutes after he started fishing, Gibson landed a 54-1/16-inch muskie, the longest ever recorded in West Virginia. 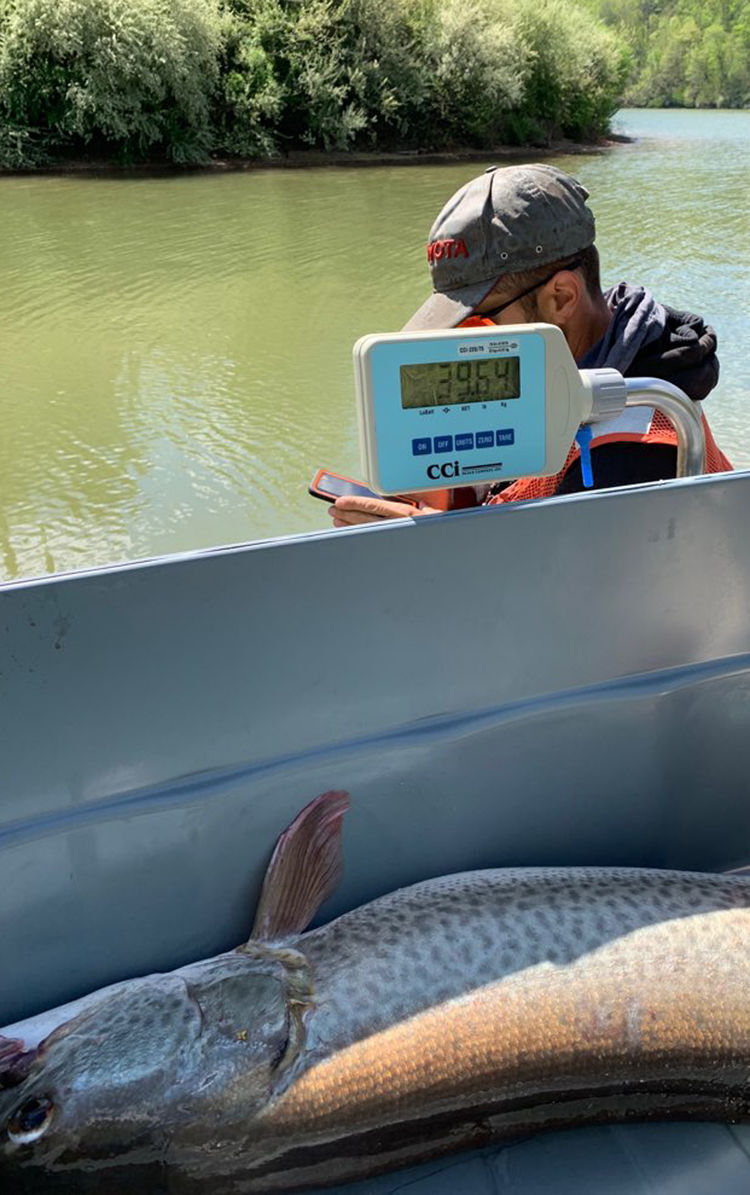 The muskie’s weight, 39.64 pounds, was recorded at Burnsville Lake by two Division of Natural Resources officials.

On a day off from his job as a muskie guide, Chase Gibson and a buddy decided — what else? — to go muskie fishing. Good choice. Minutes after he started fishing, Gibson landed a 54-1/16-inch muskie, the longest ever recorded in West Virginia.

The muskie’s weight, 39.64 pounds, was recorded at Burnsville Lake by two Division of Natural Resources officials.

Chase Gibson wanted to keep muskie fishing, but his heart wasn’t in it.

“We tried fishing afterward,” recalled Gibson, who had spent a wild 15 minutes fishing with his friend, Frank Porupski. “We just kept giggling and looking at each other.”

Small wonder. In that memorable 15 minutes, Gibson hooked and landed a muskie longer than any ever caught in West Virginia. And after having it officially measured and weighed, he released the record-breaking fish back into the waters of Burnsville Lake.

It all happened on April 30. Gibson, a 19-year-old muskie-fishing guide from Mount Clare, had a day off from guiding clients.

“So I called my buddy, Frank, and we decided to give Burnsville a try,” he said. “I do most of my guiding at Stonewall Jackson Lake, and I wanted to do something a little different.”

It didn’t take him long to accomplish that goal.

“We pulled into a spot where there was some standing timber,” Gibson said. “I was at that spot in December and had a big muskie follow one of my lures, so I figured we’d start there.”

On his boat’s fish finder, Gibson could see a lot of crappie suspended 8 to 12 feet below the water’s surface. He clipped a Muskie Innovations Dyin’ Dog lure to his bite leader and began casting.

A handful of casts later, something really big ate the lure.

“I was pulling the lure, and I felt the rod load up,” he said. “I set the hook. The fish came up and started shaking its head on the surface.”

Gibson had caught several muskies larger than 50 inches, and he could tell this fish was in that class.

“I felt like it was bigger than 50, but I didn’t know how much bigger,” he said.

With so many sunken trees in the area, Gibson put as much pressure on the fish as he could. He knew the 100-pound-test braided line and wire bite leader would stand the strain, so he leaned back on the heavy-action rod and began horsing the fish toward the boat.

The fish took the hint. Like a finned torpedo, it charged toward the boat and swam under it.

“It almost got the line wrapped up in the trolling motor,” Gibson said. “Fortunately, Frank was waiting with the net and just scooped the fish up when it came up on the other side of the boat.”

The two anglers discovered that the muskie, a big post-spawn female, was barely hooked.

“Only one hook of the back treble was in her jaw, and that one hook was starting to bend out,” Gibson said. “If Frank hadn’t been so quick with the net, I might’ve lost the fish.”

With the muskie still in the net, Gibson and Porupski started debating how big the fish might be.

Gibson unhooked the fish, posed with it for a couple of quick photos, and measured it on his boat’s bump board.

“I saw her tail hit 54 ¾ inches with her mouth open,” Gibson said. “That told me she was at least 53 ½ inches, which was the state record for length.”

Gibson wanted to release the fish, but he also wanted to have it recognized as a new state record.

“We’re thinking, ‘What do we do now?’” he recalled. “We decided to call my buddy, Aaron Yeager.”

As the Division of Natural Resources’ assistant district fisheries biologist for the area, Yeager was in a unique position to help. If he could make it to Burnsville quickly enough, he could certify the fish’s size before Gibson released it.

Finding cell-phone service on Burnsville Lake proved difficult. Gibson and Porupski had to tool along using the boat’s trolling motor until Gibson got a signal, and even then it took 10 tries before the call went through.

“I told Aaron I had a possible state record in the net,” Gibson said. “When I told him the fish was 53 ¾ inches, Frank had to correct me. My brain was pretty fried by that time.”

Yeager asked Gibson if he could get the fish to the lake’s marina, but Gibson was afraid motoring that far with the fish in the net might kill it. Yeager not only brought a boat, he also brought Jim Walker, the DNR’s head fisheries biologist for the area.

“It only took him 2 hours to get there, which I thought was pretty fast,” Gibson said.

All that time, Gibson and Porupski had kept the fish in the net alongside of the boat.

“We made sure she was always upright and in the shade,” Gibson said, “and we kept the boat faced into the wind, so the wave action would push water over her gills. And we didn’t touch her.”

Yeager arrived, but the men couldn’t get his scale to zero properly on the moving boats. They drove the boats ashore on a shallow beach and set up the scales.

“We put her back in the water, sat with her for a few minutes to let her recover, and she took off. I was surprised she took off that well.”

News of the record-breaking muskie spread quickly. Not long after posting a photo to Facebook, Gibson got a call from a friend in Ohio who told him the picture was being circulated among muskie anglers there.

While he’s happy to own a state record, Gibson said he believes it will be broken, probably sooner than later.

Of course, there’s always a chance some other angler will catch the fish Gibson released.