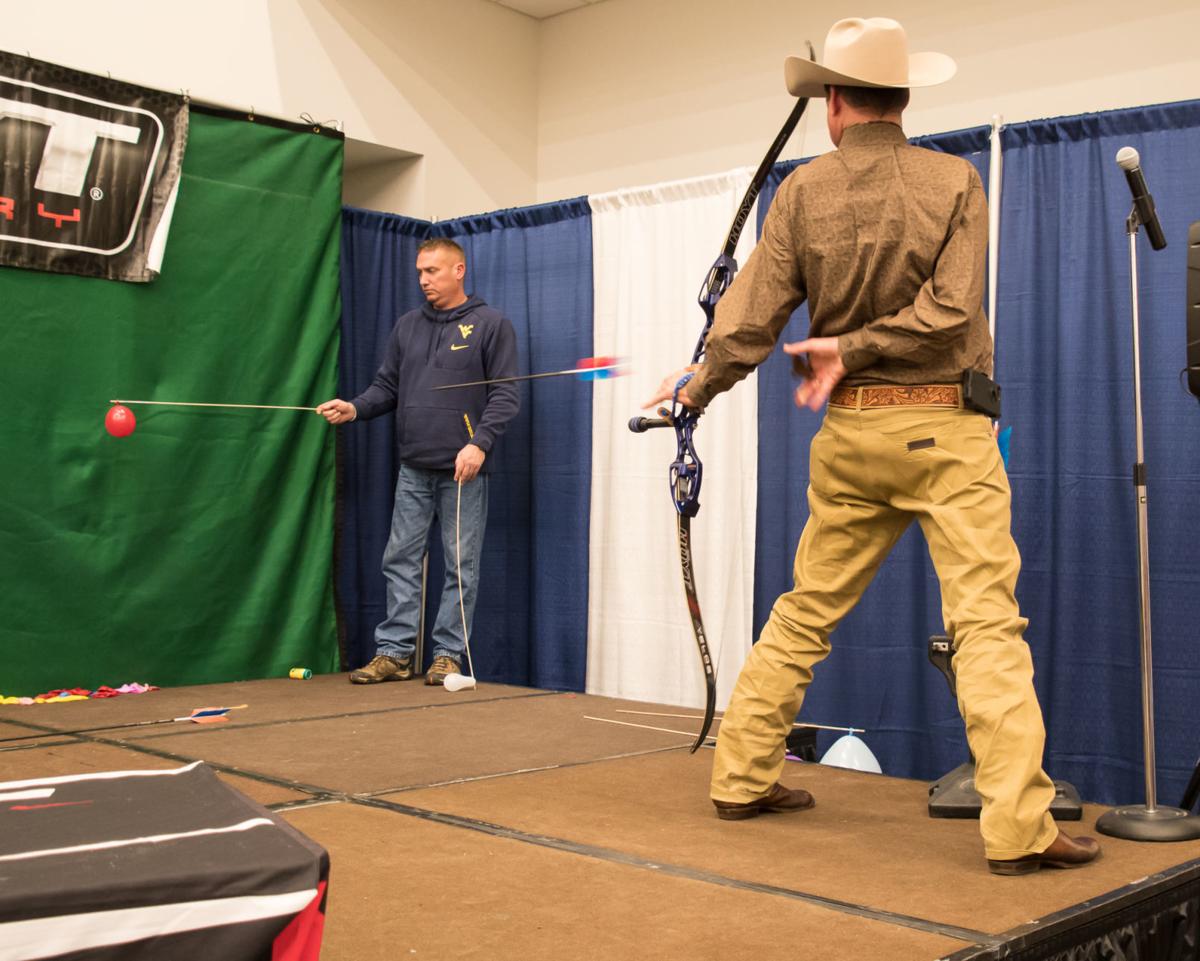 Now in his 35th year as an exhibition archer, Winfield’s Frank Addington Jr. has evolved a show with a unique characteristic: He fires every arrow from behind his back. Starting with balloon-sized targets, he works his way down to a tiny baby aspirin tossed into the air. 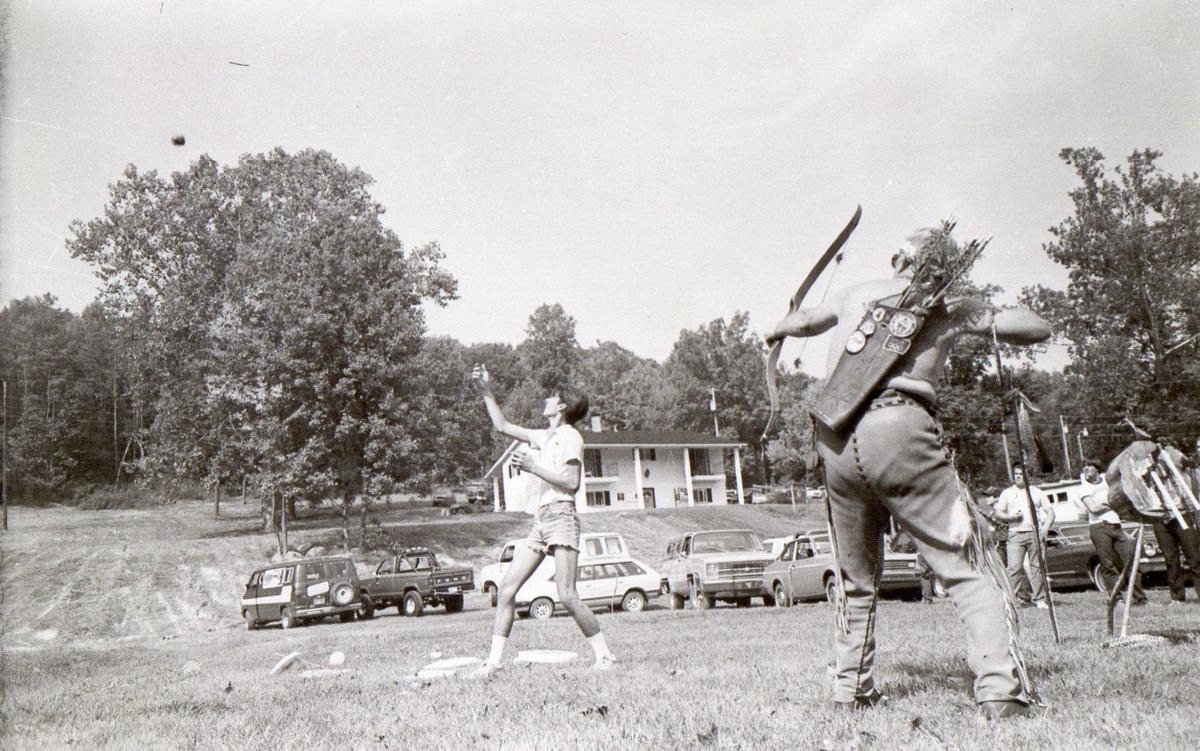 Before he started doing his own shows, Addington served as a thrower and arrow chaser for the Rev. Stacy Groscup. In 1985, Groscup brought Addington, then 17, onstage and introduced him as his protege, thus launching a career that has spanned 35 years.

Now in his 35th year as an exhibition archer, Winfield’s Frank Addington Jr. has evolved a show with a unique characteristic: He fires every arrow from behind his back. Starting with balloon-sized targets, he works his way down to a tiny baby aspirin tossed into the air.

Before he started doing his own shows, Addington served as a thrower and arrow chaser for the Rev. Stacy Groscup. In 1985, Groscup brought Addington, then 17, onstage and introduced him as his protege, thus launching a career that has spanned 35 years.

Thirty-five years ago, a tall, skinny teenager stepped in front of a crowd at Milton’s inaugural West Virginia Pumpkin Festival and, with bow and arrow, shot targets tossed into the air.

That was the first time Frank Addington Jr. ever performed in front of a crowd — a small beginning that morphed into something much larger. Nowadays, the Winfield native travels the country, wowing crowds at some of the nation’s most prominent outdoor shows with what he calls “bow and arrow razzle-dazzle.”

With the bow held behind his back, he shoots at — and hits — airborne targets as large as balloons and as small as baby aspirins.

This October, Addington will bring his show back to its origins with a return appearance to the Pumpkin Festival.

“It has come full circle,” he said. “The festival is celebrating its 35th year, and I’m celebrating my 35th year as an exhibition archer.”

Funny thing is, Addington wasn’t an exhibition archer when he took to the stage that first time.

“I was a kid who chased arrows for the Rev. Stacy Groscup during his exhibitions,” Addington recalled.

Only hours before Groscup’s scheduled appearance at Milton did Addington realize he’d be shooting alongside the legendary archer.

“He had dropped in to see us at Dad’s archery shop,” Addington said. “We were sitting on the porch drinking Pepsis when Stacy looked at me and said, ‘Son, get your bow.’ ”

When Addington returned, bow in hand, Groscup pointed to the circular Pepsi logo on an empty can.

“Stacy said, ‘When I toss this into the air, you focus on that logo and shoot,’ ” Addington said. “He threw it up, and doggoned if I didn’t hit it with the first shot. He said, ‘Son, today you shoot with me. Bring your bow.’ ”

Halfway through Groscup’s exhibition at the inaugural Pumpkin Festival, he turned the show over to Addington.

“He said, ‘And now, welcome my young protégé, Frank,’ ” Addington recalled. “From that moment on, I was done. I knew exactly what I wanted to do.”

He went home, taped together some cardboard discs, and began to practice. When he could hit pie-plate-sized targets with ease, he shot at snuff cans. When the snuff cans became easy, he shot at white Life Savers.

Armed with a bow, some restricted-flight arrows, some targets and a net to use as a backstop, Addington began doing shows at schools, at Scout camps, and at 4-H clubs.

“I didn’t do it for money then,” he said. “My dad, Frank Sr., underwrote the shows. He figured if I was getting kids interested in archery, he’d recoup some of the money when they became customers.”

During his shows, Addington also delivered a strong “say no to drugs” message, a practice he continues to this day.

“I’ve expanded the message a little, too,” he said. “Now I also tell kids the value of putting down their electronic devices and getting outdoors. And I talk about overcoming handicaps and using the gifts God gave you.”

That last point is something near and dear to Addington’s heart because he had to do that himself. Born with a sunken chest and poor lung capacity, he was unable to play sports as a youngster.

“I was blessed to have 20/8 vision, though,” he said. “And I had a natural talent for archery, so archery became my thing.”

The more shows Addington did, the more popular they became.

“The local rep for Hoyt Archery, Jim Wynne, had me do shows in Virginia,” Addington said. “The president of the company had me do an exhibition at the Dixie Deer Classic in Raleigh, North Carolina.”

If there was a single event that helped make his reputation, however, it was an outdoors show in Union Grove, North Carolina.

“There was a drunk heckler in the audience,” Addington said. “Standing about 90 yards away was a silhouette deer target with a big red dot on it. The show was raising money by having people pay to try to hit the target.

“Finally, I knew I’d have to do something or Dad was going to go over and clean that guy’s clock. So I spun around and took a shot at that deer. God must have guided the arrow, because it went right into the bulls-eye.

“From that moment on, the audience was mine. People still remember that shot.”

Ten years of shooting for free helped Addington develop enough of a reputation to turn pro. He began charging for appearance fees and travel expenses, and promoters were happy to pay.

In 2003, he served as the spokesman for the FITA World Archery Tournament in New York City. “The event had 600 shooters from 80 countries, and I was the one doing the media,” he said. “I performed live at the Tavern on the Green, and later at Van Cortlandt Park. Jeanne Moos from CNN came and did a feature on me. After that, I had a flood of requests from shows.”

He did them, quite literally, all over the country. When trying to book flights out of Charleston became overly difficult, he, his wife Amanda and their two young sons moved to San Antonio, Texas.

“That was in 2014,” he said. “When the boys were really young, I cut back my schedule so I could stay at home and help raise them. Now that they’re a little older, I’ve ramped my schedule back up again.”

“Thirty-five years,” Addington mused. “It doesn’t seem like it’s that long. I’m very blessed. And, you know, the more credit I give to God for my vision and my ability, the better things seem to get.”