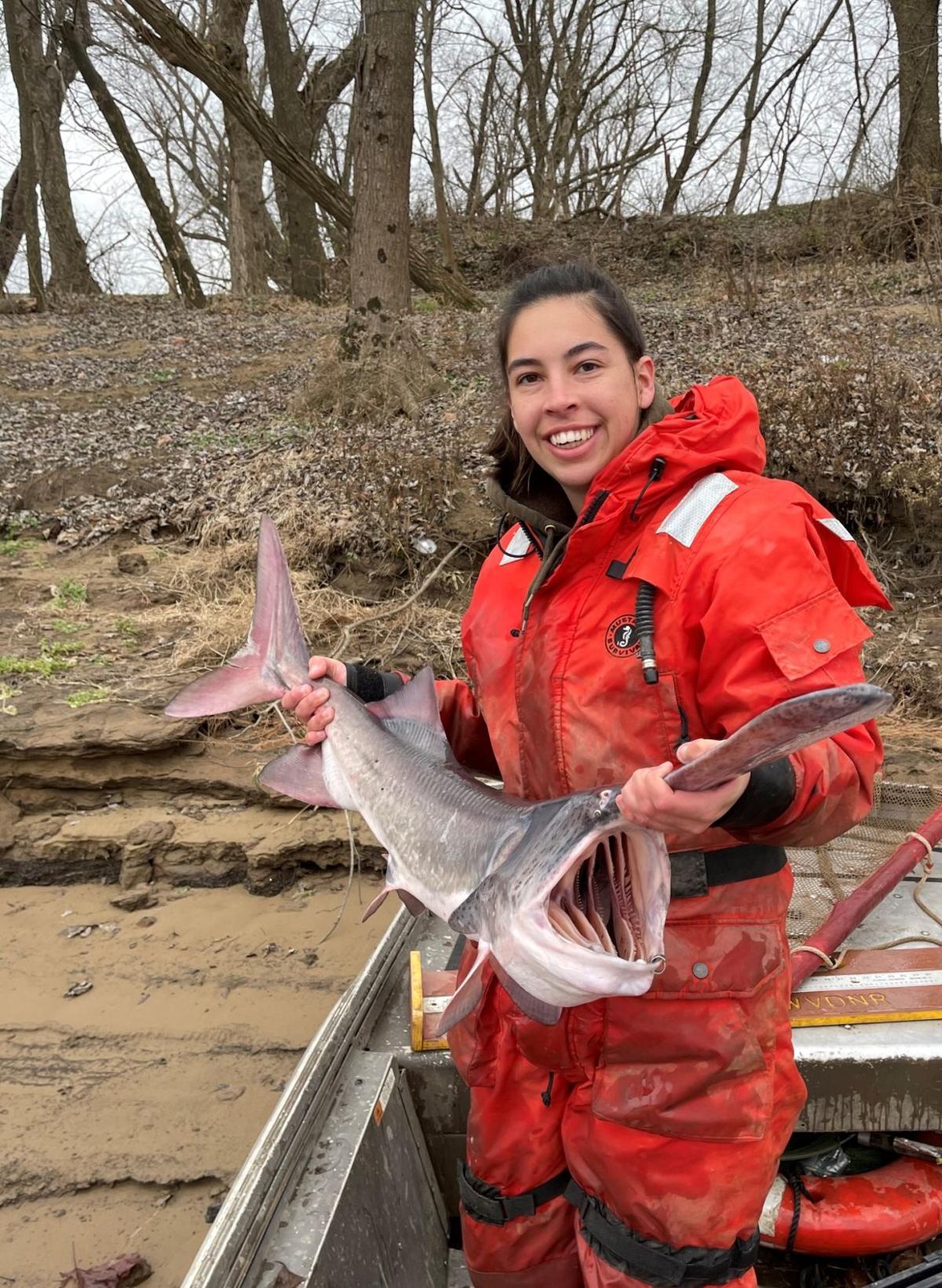 Finding paddlefish hasn’t been easy for WVU researcher MacKenzie Ullman, but when she does, the fish average nearly 4 1/2 feet in length from the forks of their tails to the tips of their snouts. Ullman’s work is part of a cooperative DNR-WVU study to determine how successful the DNR’s paddlefish reintroduction program has been. 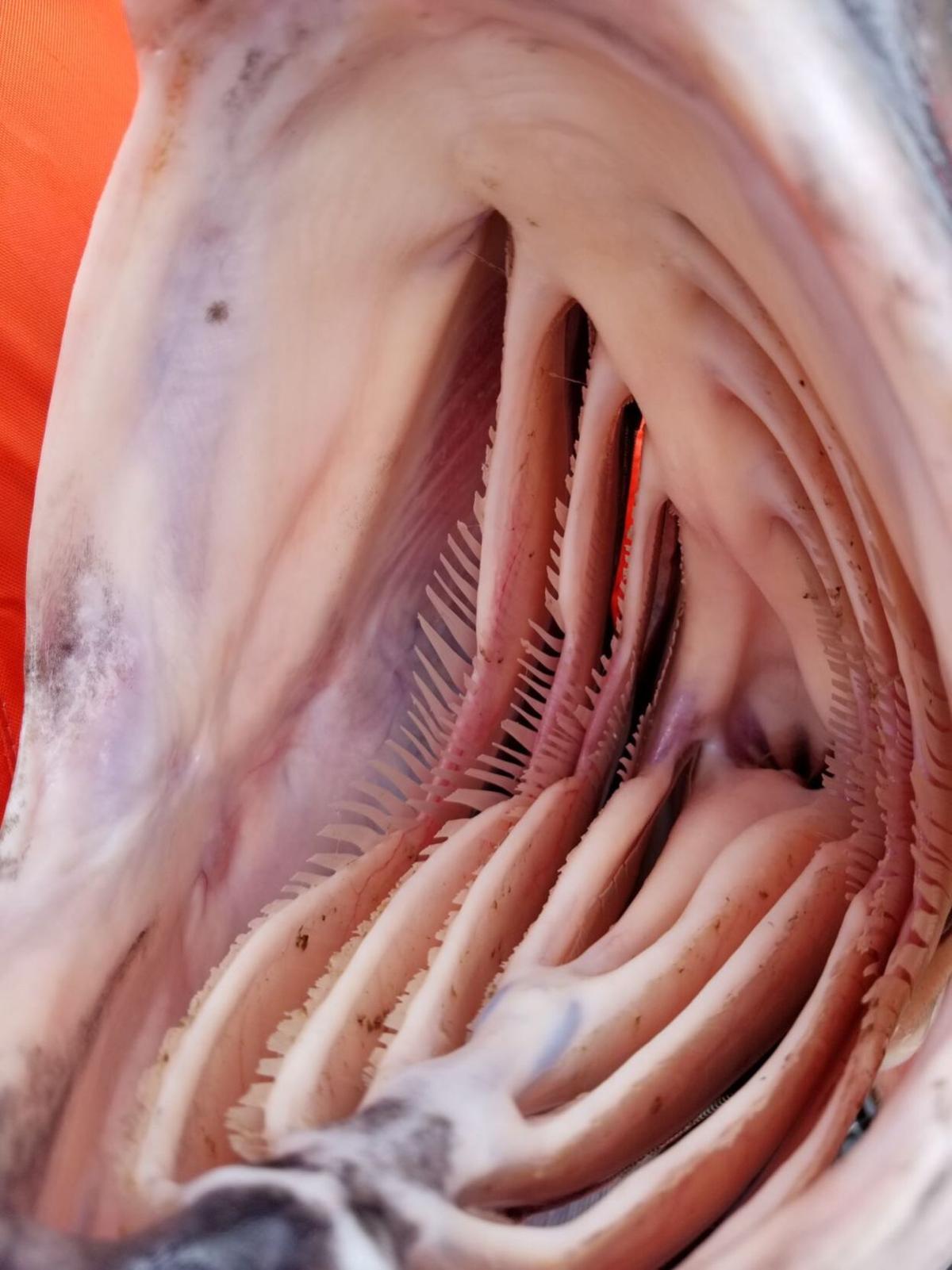 A paddlefish’s mouth is loaded with comb-like gill rakers. As the fish swims along, mouth wide open, the gill rakers strain plankton and small insects from the water. Tiny hair-like cells on the underside of the fish’s paddle-like snout allow it to detect clouds of plankton, even in the turbid waters of the Ohio and Kanawha rivers.

Finding paddlefish hasn’t been easy for WVU researcher MacKenzie Ullman, but when she does, the fish average nearly 4 1/2 feet in length from the forks of their tails to the tips of their snouts. Ullman’s work is part of a cooperative DNR-WVU study to determine how successful the DNR’s paddlefish reintroduction program has been.

A paddlefish’s mouth is loaded with comb-like gill rakers. As the fish swims along, mouth wide open, the gill rakers strain plankton and small insects from the water. Tiny hair-like cells on the underside of the fish’s paddle-like snout allow it to detect clouds of plankton, even in the turbid waters of the Ohio and Kanawha rivers.

When dinosaurs roamed the earth, paddlefish were there, too.

They’re still around today, cruising the Ohio and Kanawha rivers, feeding on plankton and rarely revealing their presence to humans.

Their secretive nature is creating a problem for researchers trying to find them and study them. Katie Zipfel, a biologist with the West Virginia Division of Natural Resources, said capturing the reclusive fish for an ongoing research project has been a hit-or-miss proposition.

“They’re very difficult to find in the rivers’ main stems,” Zipfel added. “You might set a net in one place and catch one or two, but you can set that same net 100 yards upstream or downstream and get nothing.”

Fisheries biologists usually sample fish populations by electrofishing — running a low-voltage current through the water and forcing fish to the surface.

“That works great for scaled fish, but paddlefish don’t have scales,” Zipfel said. “To catch paddlefish, we have to use gill nets.”

The problem with gill-netting is that it tends to catch only paddlefish of a particular size. So far, the fish Zipfel and researcher MacKenzie Ullman have caught were fairly large.

“We haven’t caught any smaller fish so far, but that’s probably because we’ve been using nets with large mesh,” Zipfel said. “We think that in the future, we might catch some smaller paddlefish if we use a smaller mesh.”

Finding young, small paddlefish is one of the research project’s two goals.

“The first goal is to do a population assessment to determine how many paddlefish we have, and whether we have a well-established population,” Zipfel explained.“The second goal is to find out if we have natural reproduction taking place.”

Though native to the Ohio and Kanawha, paddlefish had become virtually extinct by the 1980s. Zipfel said water pollution on both rivers did most of the damage, but so also did the smaller, more numerous navigation dams placed there during the 19th century.

“After the Clean Water Act passed [in 1970], the rivers became a lot less polluted,” she added. “And the construction of larger, more widely spaced navigation dams [in the early half of the 20th century] created conditions more to the paddlefish’s liking.”

In the early 1990s, DNR officials decided the rivers had recovered sufficiently to support a paddlefish reintroduction program. They obtained young paddlefish from Kentucky and South Dakota, and stocked them into the Kanawha and Ohio.

“We began raising them in our own hatcheries in the early 2000s,” Zipfel said. “We stocked them until 2014, when problems at the Palestine hatchery caused us to suspend stockings.”

The lull in stockings gave DNR officials an opportunity to determine how successful the stocking effort had been.

“We had always just assumed that since we were able to capture adults to use as brood stock for our hatchery program, the stockings were somewhat successful,” Zipfel said. “Now, by doing a proper population study, we think we’ll get a better handle on how successful they were.”

Since no stockings have taken place since 2014, any young paddlefish captured during the study will be the result of natural reproduction.

Zipfel said the coronavirus pandemic kept her and Ullman from doing much sampling last year, but they plan to do more this year.

“There are more paddlefish in the [Ohio] than I anticipated,” she added. “I’m very encouraged by that. It appears we’ve had good survival of the fish we’ve stocked. We haven’t been able to sample any smaller fish so far, but we’re researching some techniques that might help us catch them.”

All the paddlefish the DNR stocked up to 2014 were outfitted with coded wire tags that allow researchers to identify when the fish were released. If Zipfel and Ullman catch young un-tagged fish, they’ll know they were the result of natural reproduction.

The study also will focus on how the fish move within the Ohio-Kanawha river system.

Zipfel said some of the adult fish will have acoustic transmitters surgically implanted into their abdomens. When the fish swims by one of several receivers located along the river, a computer will log the location, date and time.

“Paddlefish are a very mobile species,” Zipfel said. “They swim along with their mouths wide open, filtering plankton out of the water with their gill rakers. They’ve been known to move hundreds of miles.”

Most of the population research will take place on the Robert C. Byrd pool of the Ohio and lower Kanawha, mainly because that’s where most of the acoustic receivers are located. Zipfel said she and Ullman are working with catfish anglers who use side-scan sonar to locate blue catfish.

“Blue cats and paddlefish both are pelagic species, found most often out in the middle of big rivers,” she added. “Some of the fishermen have told us they’ve found concentrations of paddlefish at certain spots in the river. That’s really encouraging.”

Fishermen might detect paddlefish on their sonar, but chances are they’ll never put a hook into one. “Really, the only anglers who catch them are those who snag them by accident,” Zipfel said.

“And since paddlefish are a ‘conservation species’ in West Virginia, it’s illegal to keep them.”

She said many of the anglers who have snagged them think they’re a species of shark, but they’re not.

According to the Illinois Natural History Survey, the species dates back to the Late Cretaceous period, 70-75 million years ago. The American paddlefish, the lone surviving member of the paddlefish family, is native to the Mississippi River watershed.

Though they feed on tiny plankton, paddlefish grow to enormous size. The world-record specimen, caught last year in Oklahoma, tipped the scales at 151.9 pounds.

They don’t grow as large in West Virginia, or at least they haven’t yet. Zipfel said the average paddlefish she and Ullman sampled would measure 35 inches from its eye to the fork of its tail. Add in 18 inches or so for the fish’s paddle, and that would put the average at 53 inches, or just shy of 4½ feet.