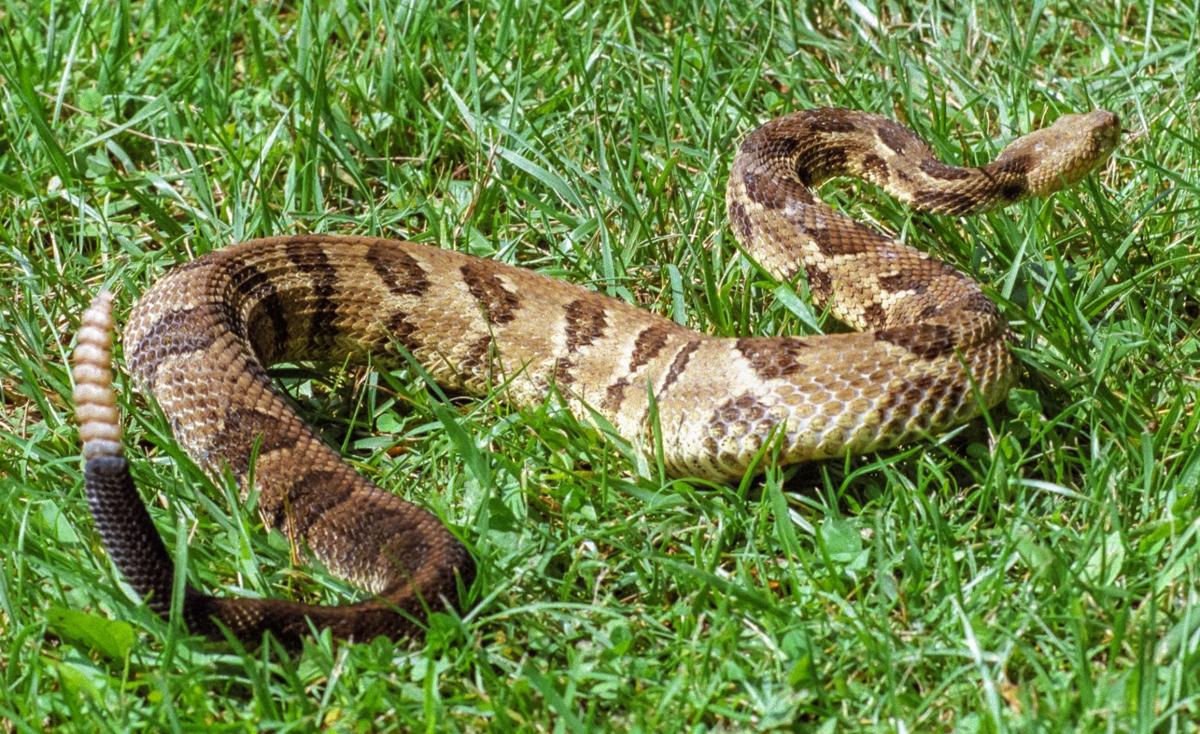 West Virginia’s official state reptile enjoys a little more protection nowadays than it once did.

Regulations effective earlier this year prevent everyone from snake enthusiasts to pet-trade opportunists to snake-handling churches from taking too many timber rattlesnakes from the wild.

“I think the regulations will make a difference,” said Jim Fregonara, a Division of Natural Resources biologist who conducts public snake exhibitions for the agency. “Timber rattlers can still be found in the state, especially in the higher elevations, but without these regulations the population might be in trouble.”

The new rules allow collectors to catch and keep just one timber rattler a year, and that snake must measure at least 42 inches in length.

Barb Sargent, a biologist with the DNR’s Wildlife Heritage section, said the size limit was put in place to protect females, which usually run somewhat smaller in size than males. Essentially the regulation protects the overall population by assuring a steady supply of breeding-age females.

Timber rattlers are by no means considered threatened or endangered within the state, but they aren’t often seen unless people know where to look for them. Some people do, though, and they were the ones for whom the regulations were intended.

“In Pendleton County one time, I came across some men who clearly were collecting venomous snakes,” Sargent said. “They were wearing snake gaiters to protect their lower legs, and they were carrying snake tongs and hooks. This was before any collecting regulations went into place.”

The rattler-collecting limit is just one of an entire suite of regulations intended to protect the state’s reptiles and amphibians. Wood turtles, map turtles and some species of frogs had become depleted by collectors for an increasingly demanding exotic pet trade.

West Virginia became a target of opportunity for pet-trade collectors because it had no protective regulations.

Sargent said the new regulations allow reasonable numbers of some species to be taken while severely restricting the take of others.

Frog-giggers, for example, are still allowed to take up to 10 bullfrogs or green frogs. Licensed bait shops are allowed to keep up to 250 salamanders at a time. For individuals, most salamander species carry a limit of 10. Most lizard, snake and turtle species carry a limit of four. Some species, however, are strictly off-limits. The endangered wood turtle falls into that category. So does the endangered Cheat Mountain salamander.

The biologists and law enforcement officers who proposed the regulations originally wanted to add timber rattlers and Northern copperheads to the no-take list, but they ran into a bit of an obstacle -- the West Virginia Constitution, which prohibits any law from impeding upon or promoting a religious practice.

Since snake-handling churches are legal within the state, regulators had to allow venomous snakes to be collected. The regulations don’t allow any special dispensations for churches, though; the same one-snake-per-person possession limit is in effect for them, too.

“We didn’t want to infringe on anyone’s religion,” Sargent said, “but we did want to stop illegal trade. We’re not out to bust churches, but if there are 10 snakes in a church, there had better be at least 10 people.”

Fregonara believes some Mountain State timber rattlers might have made it into the pet trade, but he said the number probably wasn’t very high.

“A few people were trying to sell to pet stores on a sort of a black market, but I’ve never seen [a timber rattler] for sale,” he said. “Take it from me; venomous snakes are very difficult to keep. If you own one, you’d better respect how fast they are and how dangerous they can be.”

He speaks from experience. Once, when feeding the timber rattler he keeps for his traveling exhibit, Fregonara opened the snake’s cage and carelessly tossed the food toward the coiled-up viper. The snake struck at the food and missed, but nailed one of Fregonara’s fingers.

“I didn’t feel any pain, but I looked down at my finger and saw the two little red dots where the fangs had entered,” Fregonara recalled. “Fortunately it was a ‘dry bite,’ with no venom injected.”

Had the snake pumped Fregonara full of venom, treatment for the resulting tissue, blood and nerve damage might have cost tens of thousands of dollars.

“It’s expensive to get treated for rattlesnake bites, because the treatment involves injections of an antivenin called CroFab,” he explained. “A severe bite can require several vials of it, and each vial is around $1,000. If you have to get life-flighted to the hospital, that’s thousands of dollars more. I know of one guy over [in the Eastern Panhandle] who ended up spending $100,000 for a timber rattler bite.”

Of West Virginia’s two venomous snakes – the copperhead is the other – the timber rattler is by far the more dangerous. Even so, the rattler’s bite is considered mild in comparison to the bites of Africa’s black mamba, southern Asia’s king cobra or Australia’s Eastern brown snake.

Sargent said the timber rattler probably doesn’t deserve the fearsome reputation it has.

“They’re actually pretty calm-natured,” she explained. “They’re not going to waste their venom on you unless you step on one or threaten them. To get a timber rattler to bite, you really have to get on its nerves.”

She said most people don’t realize that timber rattlers have been the official state reptile since 2008, when the students at Romney Middle School convinced members of the state Legislature to give it special status.

“People certainly shouldn’t kill timber rattlers unless they absolutely have to,” Sargent added. “The old mindset of, ‘It’s a venomous snake, so kill it,’ needs to give way to tolerance. We hope the new regulations will encourage people to think twice about capturing or killing our reptiles and amphibians.”