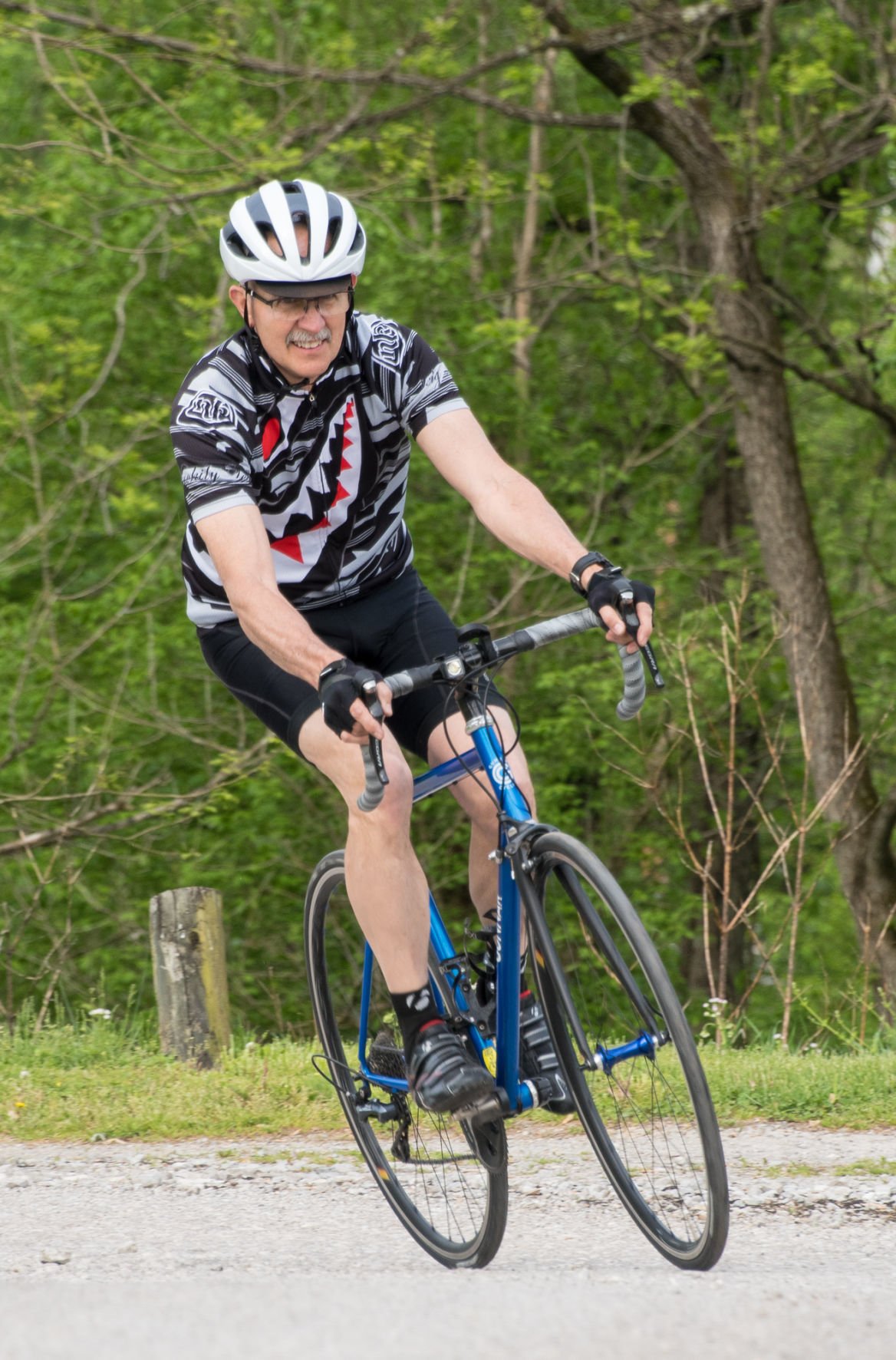 Now that Steve Parsons’ shoulder is healed, he is once again able to ride his bicycle on West Virginia’s road. Parsons suffered a Class III shoulder separation after he collided with a dog last July on Little Coal River Road in Lincoln County. 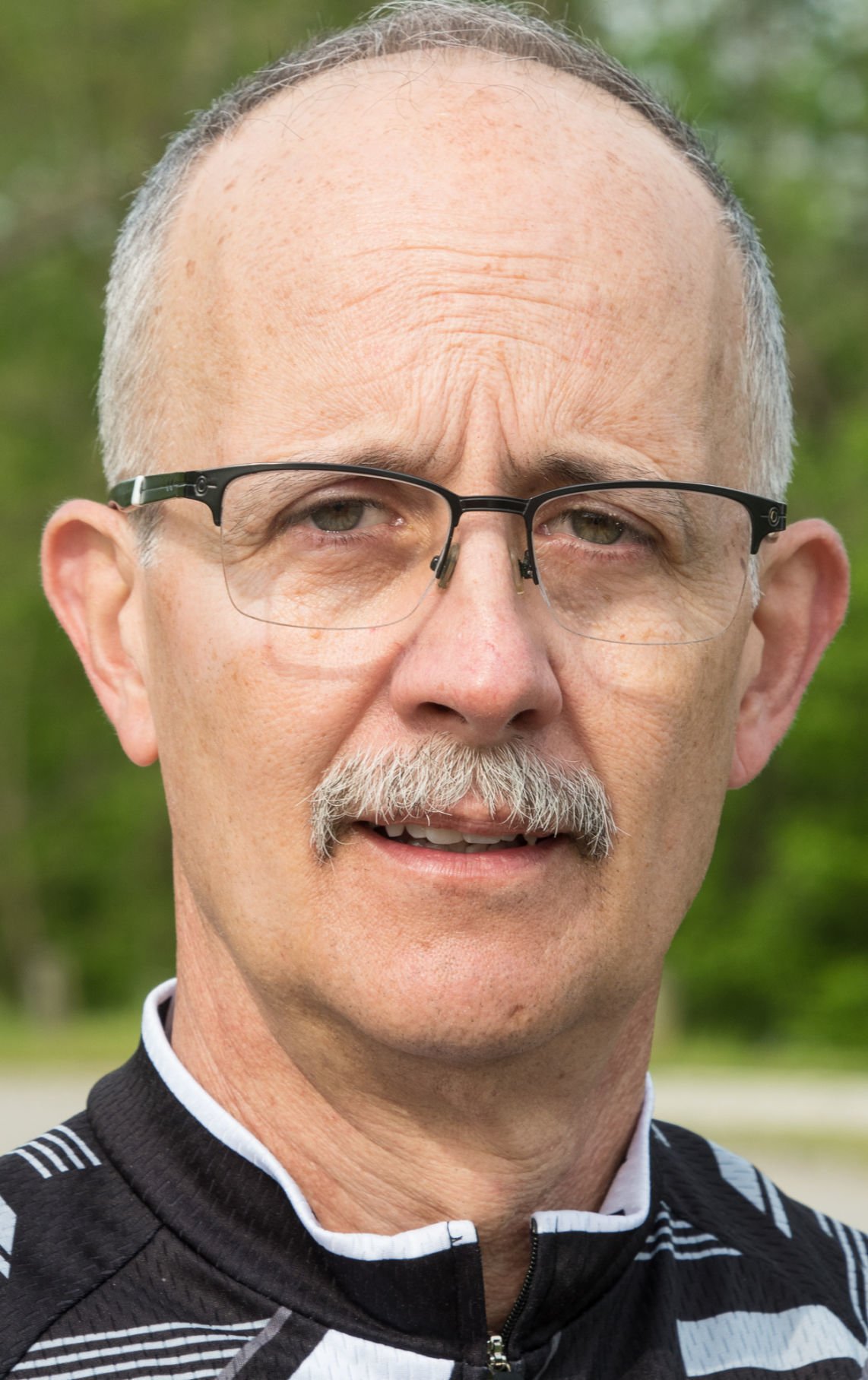 Steve Parsons doesn’t remember what happened after the dog ran in front of his bicycle.

“I didn’t have time to react,” said the retired St. Albans fire chief. “My friend, who was riding with me, said I hit it broadside. A woman behind us in a car said I went sailing through the air.”

Parsons landed on his head and shoulder. The impact broke his bike helmet in five places, separated his right shoulder, and set him on an effort to warn the public about the dangers of allowing dogs to run free.

“This shouldn’t happen,” he said. “The West Virginia State Code clearly states that owners are responsible for their pets, and if owners let the pets run at large and cause a vehicle accident, a bike accident or a motorcycle accident, the owner is personally liable.”

In West Virginia’s towns and cities, leash laws and the threat of dogcatchers help suppress the number of cyclists who get wrecked or bitten by dogs. On the state’s rural roads, it’s a different story.

Avid cyclists, especially those fit and strong enough to handle steep hills, prefer to ride out into the country. Parsons, whose rides often cover 25 to 50 miles, strongly prefers rural rides.

On the day he was injured, Parsons and a friend started their ride in St. Albans and took Little Coal River Road toward Alum Creek.

“We’re pretty fast riders,” Parsons said. “We were clipping along at better than 30 miles an hour, and I told my friend we’d better slow down because we still had 15 miles more riding to do. We backed off, and I looked at my [speedometer] and saw we’d taken it down to 24 mph.

“We cruised along like that for another 400 or 500 yards, and out of nowhere a brown dog came out from behind a fence. It was 10 feet away when I saw it. I didn’t have time to react.”

Fortunately for Parsons, the woman in the car turned out to be a registered nurse. She helped administer aid until help arrived.

“The Lincoln County ambulance was in Logan at the time, and it took 48 minutes to get to us,” Parsons recalled. “I laid in the highway all that time. Folks tried to move me, but every time they sat me up, I passed out.”

“What kills me about this is that I did nothing wrong,” Parsons said. “It’s a public road, and bikes are entitled to ride on it. This happened because a dog owner chose to let his dog run free.”

Parsons isn’t the only local cyclist wrecked or bitten by dogs. Mary Shultz, who often leads group rides for the Mountain State Wheelers bicycle club, said such incidents are all too common.

“I haven’t personally had an incident like that, but I know of many others who have been bitten and had to go to the wound center for treatment,” she said. “Others have been taken down by dogs, and suffered broken collarbones and hand fractures that required surgeries.”

Shultz, an unabashed dog lover, said the problem isn’t with the dogs themselves, but rather with their owners.

“I am a responsible dog owner, but that’s not always the case for those who live in our rural areas,” she said.

Parsons said most dog owners, urban or rural, don’t understand the financial liability they risk when they allow their pets to wander at large.

In Parsons’ case, however, a lawsuit wouldn’t have done any good.

“The person who owned the dog I hit didn’t have insurance, didn’t have money, didn’t have anything, really,” he said. “I ended up eating all the out-of-pocket costs for this. The ambulance bill was $769, my share of the hospital bills was a little over $1,000, and a new bike helmet cost me $179.”

The impact also damaged one of the bike’s shifters, a high-end, state-of-the-art piece of machinery that cost $500. Fortunately for Parsons, he was able to fix the part and didn’t have to replace it.

He said he now wants to help other cyclists avoid the same pain and expenses he had to endure.

“The best thing cyclists can do is not to run from dogs that chase them,” he said. “That just encourages the dog, because it thinks it’s winning.

“The best thing you can do is stop, get off the bike on the side opposite the dog, and stand your ground. Yell at the dog. Raise your arm like you’re going to strike it with a stick. Usually that’s enough to discourage the animal and allow you to keep riding.”

“I carry a little marine-grade air horn with me,” he said. “It’s very small, and it’s very high-pitched. If I can’t shout the dog down, a little blast from the air horn is usually enough to scare it off, or at least confuse it.”

As a last resort, Parsons carries a small can of pepper spray formulated specifically to repel dogs without harming them.

Shultz opts for a gentler approach. If she can’t shout a dog down, she grabs her water bottle and squirts it. So far, she said, that has been enough.

Even having a face-off with a dog, Parsons said, risks upsetting the animal’s owner.

“Dog owners scream at me and say, ‘The dog won’t bite,’” Parsons said. “Well, biting isn’t the problem. Having a dog locking up your wheels and wrecking you is the problem. I’d rather be bitten than be wrecked. If you get bit, you go get a shot and a Band-Aid. If you get wrecked and break bones, you’re facing a long recovery.”

“I’ve had dog owners go off on me when I sprayed their dogs,” Parsons said. “I tell them to keep the dog on their property. I’m on a public highway. If I come onto someone’s property and a dog bites me, shame on me. If someone’s dog comes toward me on a highway, that’s their bad.