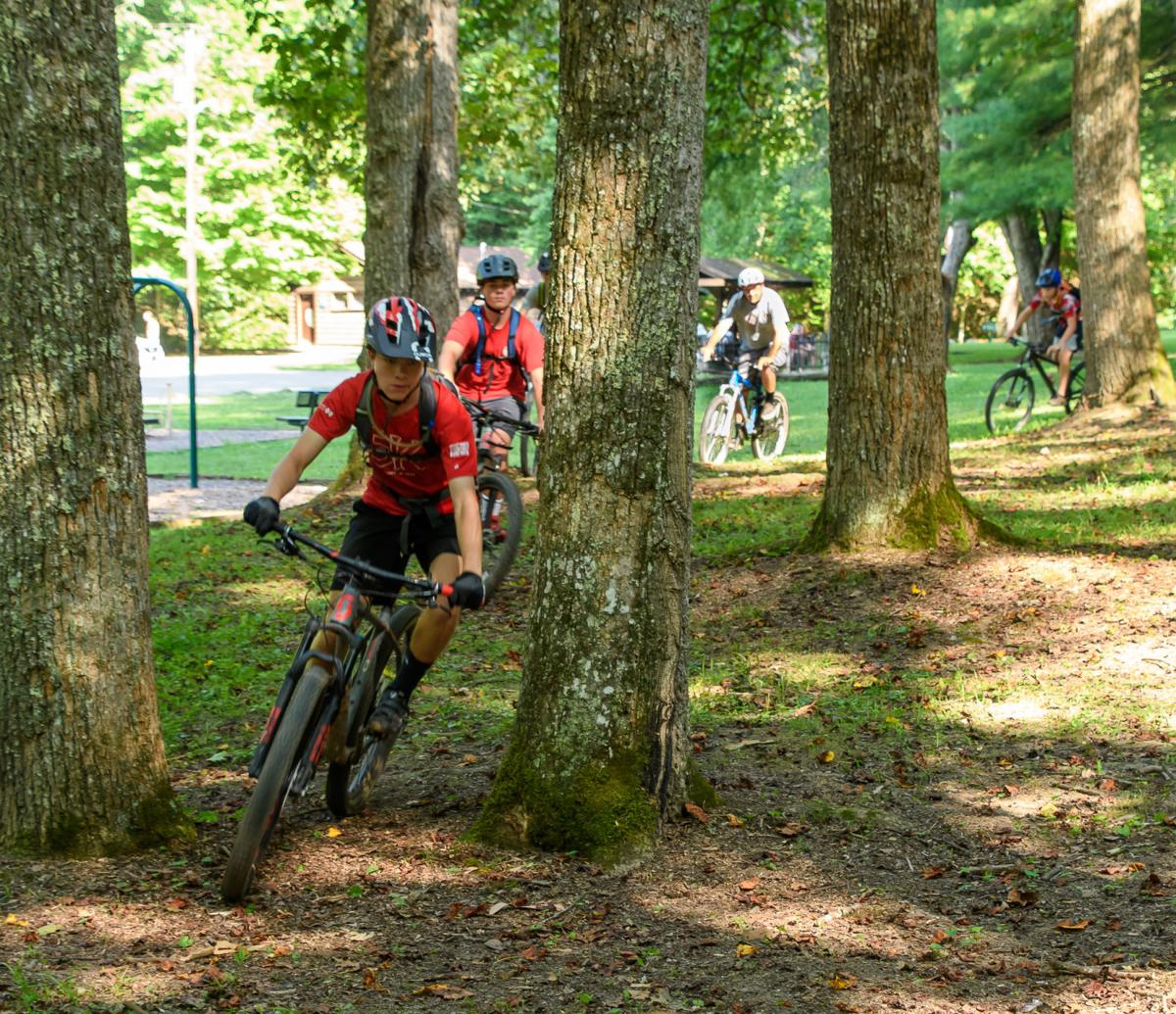 To learn the necessary skills to ride technical singletrack trails, members of the Kanawha Valley Wildcats mountain bike team first practice on flat, open ground. To learn to handle switchbacks, they weave in and out among trees. 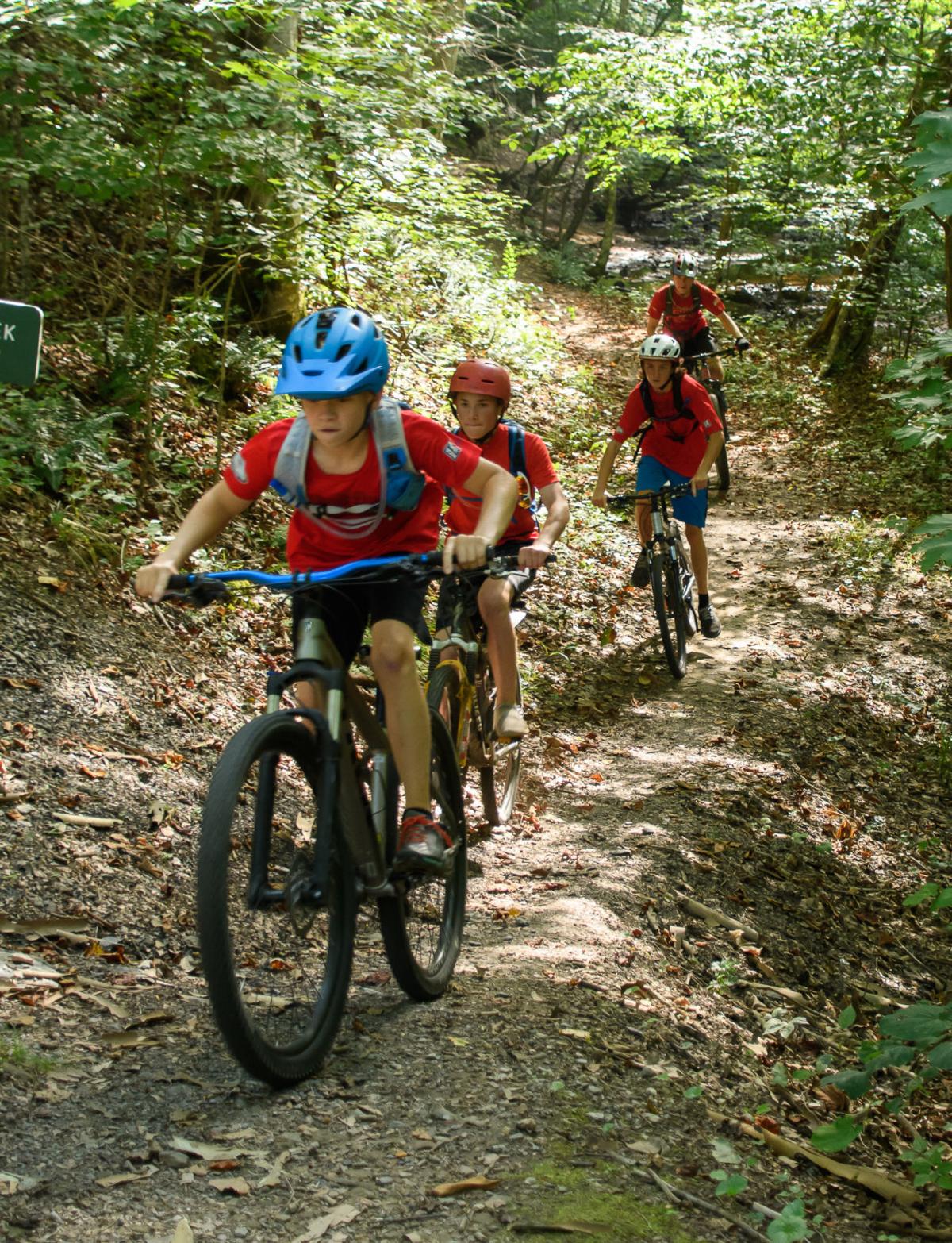 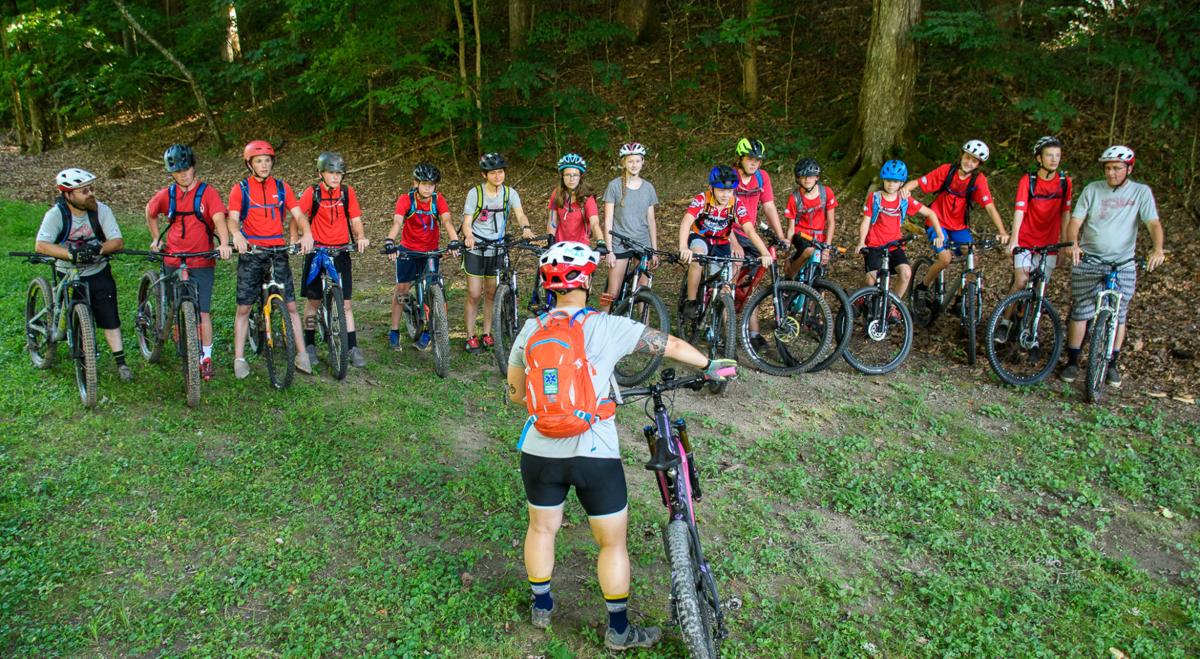 Bike maintenance is yet another component of the skills taught to scholastic mountain bike teams. For example, Kanawha Valley Wildcats head coach Mia White Fox might drill her squad on the proper names for bike components. 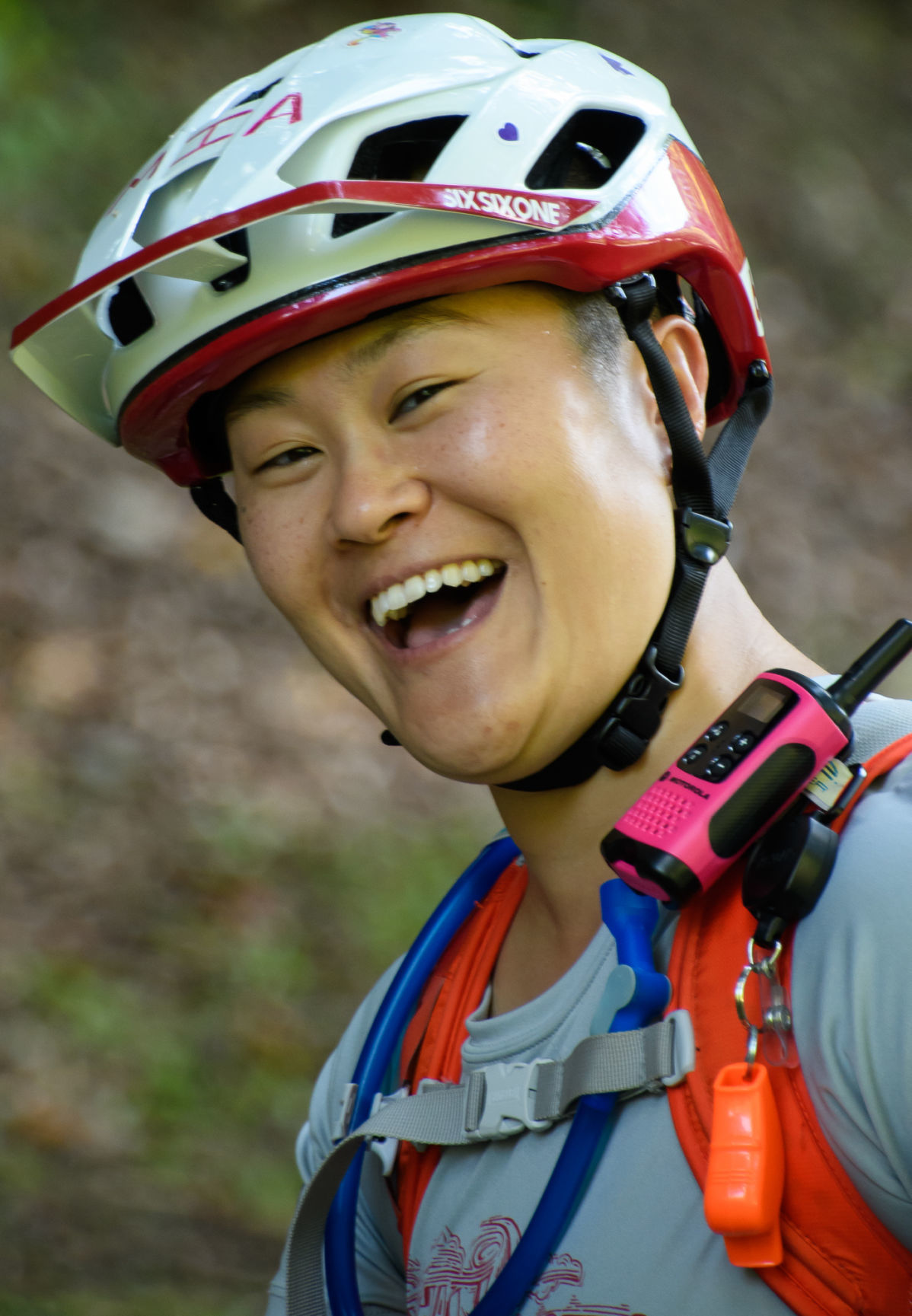 To learn the necessary skills to ride technical singletrack trails, members of the Kanawha Valley Wildcats mountain bike team first practice on flat, open ground. To learn to handle switchbacks, they weave in and out among trees.

Bike maintenance is yet another component of the skills taught to scholastic mountain bike teams. For example, Kanawha Valley Wildcats head coach Mia White Fox might drill her squad on the proper names for bike components.

Like a Pied Piper on wheels, Mia White Fox snaked a procession of kids on mountain bikes through a small stand of trees.

Behind White, more than two dozen youngsters pedaled their knobby-tired steeds through a series of graceful arcs, smiling as they went.

Who says practice can’t be fun?

Certainly not White, head coach of the Kanawha Valley Wildcats interscholastic mountain-bike team. To her, the best way to help young people learn the fundamentals of mountain biking is to make sure they have fun. The approach appears to work. In just two years, her team has grown from just five members to 32 race-ready cyclists.

“We have more kids joining all the time,” she said. “The two bike shops in our area display our fliers. People see them and get interested. And the folks at the bike shops say, ‘Oh my gosh. Go out and ride with Mia. She has this whole fleet of kids you can ride with, and there’s multiple levels of riding. You don’t have to be a seasoned mountain biker at all.’”

White doesn’t even consider herself to be a “seasoned mountain biker.”

“Two years ago, I was a [road-bike rider],” she said. “As far as mountain biking is concerned, I’m pretty much a beginner, too.”

So how did a woman who teaches spinning classes at two local YMCAs end up as the head coach for a mountain-bike racing team? Quite by chance.

“I was like, ‘Oh my goodness! I need to meet these women.’ So a friend and I brought our two teenage daughters to the Kanawha State Forest Black Bear Enduro and Mountain Bike Race. We’re big into feminism and empowerment of women, and we wanted to show our daughters all these women, riding down these crazy trails, covered in mud and with big smiles on their faces.”

That was where Fox met Cassie Smith.

“She said they were trying to set up a state chapter of the National Interscholastic Cycling Association, and get a racing league started,” Fox said. “She asked if I’d be interested in running a mountain-bike team for youths. I said, ‘Cassie, I’m a roadie! I don’t even own a mountain bike!’”

But after meeting Smith, watching her race and talking with her, Fox decided to take on the challenge.

She bought a mountain bike, signed up for the necessary NICA training and founded the Wildcats.

“Last year, 2018, was our inaugural season,” she said. “We had 11 teams scattered throughout the state, with between 90 and 100 students racing. [The Wildcats] started with five students and ended up with 22. This year, we’re already up to 32.”

White said the club is open to riders of all experience levels.

“The only requirements are that they be in the 6th to 12th grade, and that they have to have a working bike. The NICA program is aimed at kids who maybe have ridden cruiser bikes around their neighborhood and teaching them to ride singletrack.

“We teach them the fundamentals of mountain biking on flat ground in a series of skills clinics. Then we progress to rail-trail riding, and then to beginner singletrack riding. So truly, anyone who has not ridden before and doesn’t have mountain-biking skills should not be deterred from joining the team.”

Some of the Wildcats’ members came to the program with what White calls “crazy bike-handling skills.”

“A lot of them started out as BMX riders and skateboarders, and those skills carry across into mountain biking,” she said.

Despite their “interscholastic” label, the clubs aren’t affiliated with particular schools. Youngsters who choose to race represent their teams, but compete as individuals. Everyone who wants to compete may do so.

“NICA principles aren’t focused on winning races,” Fox said. “NICA’s philosophy is inclusivity, equality, and strong minds, bodies and spirits. We have a bunch of students who are racing-oriented, but we also have students who are adventure riders. I’m an adventure rider. I’m out there to ride and enjoy the beauty of the state.”

Until then, the Wildcats will be getting in plenty of practice.

The endurance rides vary from week to week.

“We might ride at Kanawha State Forest, at Eleanor City Park, Ridenour Lake, the North Bend Rail-Trail or at the Arrowhead Bike Farm in Fayetteville,” Fox said. “Those rides are about staying on your bike and getting the miles in.”

Griffin Barkey, a second-year rider with the Wildcats, said the team appeals to him “because I get to ride all the trails I like.”

“I get to be on a team, practice multiple times a week and have fun doing it,” said the Winfield High School student. “The more skills you get, the more fun it is.”

Delaney Wood, a first-year rider from George Washington High School in Charleston, said she got interested in the team when she saw how much fun her brothers were having.

“I wasn’t interested in mountain biking at first, but I started practicing at home and getting better,” she said. “Racing isn’t a huge appeal to me, but I’d like to do it a few times. Mostly I’d like to get out, explore, travel and have fun.”

Fox’s fun-first philosophy has people sitting up and noticing. About a month ago, she got an email that told her she’d been named one of five NICA Coach of the Year Award recipients.

“That was kind of crazy,” she said. “At first I thought the email was spam. I guess it goes to show that you don’t have to have crazy mountain-bike skills to be an effective leader and head coach. You just have to have the ambition, the drive and the enthusiasm. Hey, if a roadie can do it, anyone can do it.”