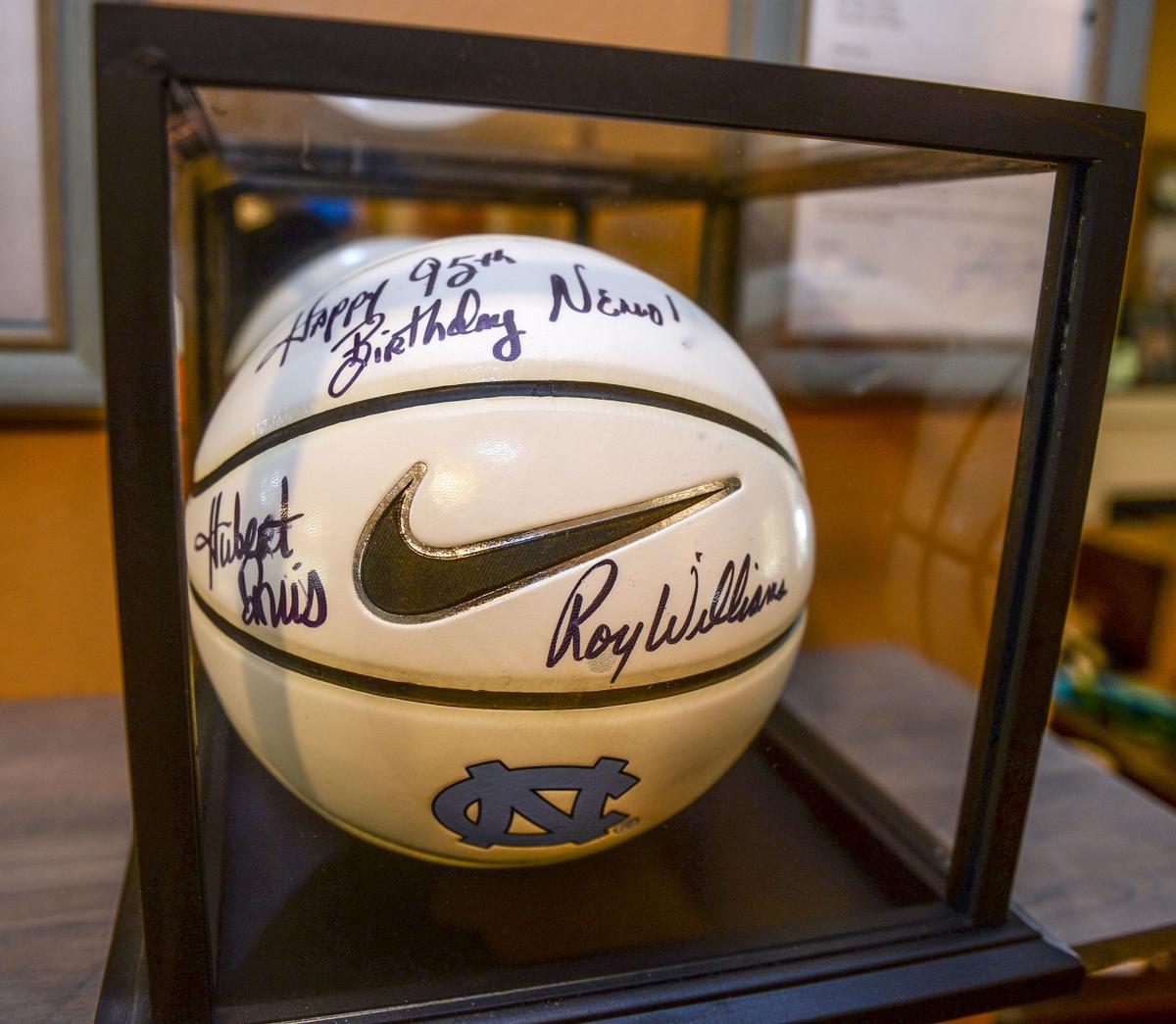 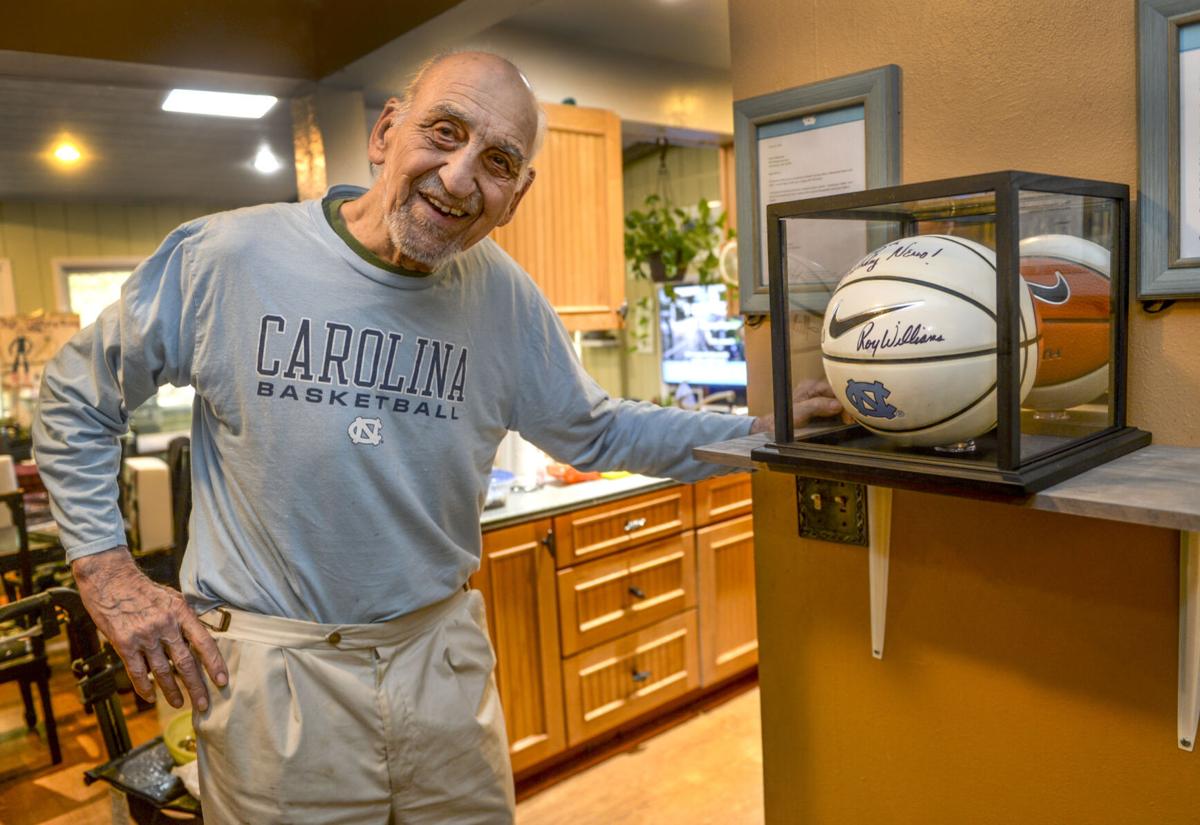 Although he’s spent most of his 95 years in his native Charleston, Sherman “Nemo” Nearman is a North Carolinian at heart.

“I’m still a West Virginian, but I’m also a Tar Heel,” Nearman said during a recent visit to his Kanawha City home. “My blood is Carolina Blue.”

It’s so blue that Nearman made a point of wearing a Carolina basketball T-shirt for an interview and photo session, and among his most prized possessions in a home full of them is a glass-encased basketball signed by former North Carolina coach Roy Williams and current Tar Heels coach Hubert Davis that they sent Nearman this past summer on the occasion of his 95th birthday on June 21.

All those around the UNC basketball program agree that Nearman is the oldest living Tar Heel hoops alumnus.

Those 95 years have been filled with memories and accomplishments, and most of them have to do with the game that was well suited for a self-described “skinny 6-foot-6 kid” with a love for competition.

The most fun came during his days at North Carolina from 1946 to 1950, especially when it came time to play the Tar Heels’ arch rival, Duke University. That, Nearman said, is when he was at his best and in his glory.

“My best games were always against Duke,” he said. “We played ‘em nine times, beat ‘em eight, and I was the high scorer seven of the eight times we beat ‘em. I consider that my major basketball accomplishment, taking care of Duke and putting them in my hip pocket.”

Nearman’s road to Chapel Hill involved a bit of serendipity.

Growing up on Laidley Street in downtown Charleston, Nearman played for Charleston High School, but only one year as a starter, as a senior in 1943.

“I wasn’t much of a high school player,” Nearman said. “I was just beginning to learn basketball then, and I wasn’t very good at it.”

He was not recruited by colleges for basketball, so upon graduation from Charleston High School Nearman got a job with the post office. Then, when he was old enough, he enlisted in the navy. That’s where he says he truly learned the game.

A navy comrade during that time by the name of Mike Todorovich — from St. Louis, who played in college at Notre Dame before the war and in the fledgling NBA after it — suggested to Nearman that he pursue college basketball when World War II was settled.

“He said to me, ‘You oughta play college basketball when you get out, you’re good enough,’” Nearman said.

Nearman was on a naval ship headed for the invasion of Japan in 1945. That invasion never happened.

“That’s when they dropped the atomic bomb,” Nearman said. “Saved my life.”

And led to the end of his military career. When Nearman was discharged in July of 1946, like so many other young war veterans, he wasn’t sure what to do with the rest of his life.

That’s when he took the words of his navy buddy to heart. Back home in Charleston, he began to look around for a place to get an education through his basketball talents. The search was not without its setbacks.

“My high school coach, Eddie King, was at Morris Harvey [now the University of Charleston] back then,” Nearman said. “I hoped he might be interested in me, and I ran into him on Capitol Street one day. He turned the other way, completely ignored me.”

Lee Patton, then the coach at West Virginia University, was a bit more welcoming, but non-committal as far as a scholarship was concerned.

“He said come to West Virginia on your GI Bill, come out for basketball and if you make the team we’ll give you a scholarship,” Nearman said.

A similar offer was made by the hoops coach at Ohio State.

“I went to Columbus and interviewed with Tippy Dye,” Nearman said. “He said the same thing: come out for the team, and if you make it, there’s a scholarship for you.”

Nearman wasn’t willing to take that chance, so he decided to enroll at WVU on the GI Bill and get his education, with or without basketball.

“I was in the middle of freshman week [at WVU] and I got a call from the coach from North Carolina [Tom Scott],” Nearman said. “He said ‘I just talked to Mike Todorovich and I need a 6-foot-6 center and would you be interested in coming down to Chapel Hill and playing here?’ So I went down to Chapel Hill and worked out for [Scott] and he says he has a scholarship for me.

“You never know. After being more or less ignored, once I stepped on the campus at Chapel Hill, I thought, ‘Boy, if they want me, I’m coming here.’”

After accepting Scott’s scholarship offer, Nearman immediately headed back to Morgantown to collect his belongings before returning to Chapel Hill to pursue his basketball career and education.

It seems, though, that WVU’s Patton had reconsidered Nearman’s basketball potential.

“Lee Patton was right there waiting for me when I went back to pick up my stuff,” Nearman said. “He says ‘I want you to come here to play and I’ve talked to some Jewish merchants downtown and we’ve worked ...’

“I said, ‘Coach, wait, I don’t want to hear any more, I’m committed to North Carolina and I’m not going to go back on my word. I appreciate your interest in me but I hope you understand, that’s what I have to do.’”

“He said, ‘I’d like to have you, but you’re committed to North Carolina, and that’s where you need to be,’” Nearman said.

Nearman played at UNC from 1946 to 1950, serving as team captain as a senior, going up against the likes of future NBA Hall of Famer Dolph Schayes (NYU) and Bob Kurland (Oklahoma A&M, the first 7-foot basketball player).

Nearman graduated in 1950 with a degree in sociology and a lifetime membership in the Tar Heel Nation.

Nearman’s life after college went in a variety of directions — he held jobs in teaching, sales, started a mail-sorting business and headed a city consumer protection bureau.

All during that time, though, basketball was a big part of Nearman’s life.

After college graduation, he found work in North Carolina, South Carolina and Ohio, playing in industrial leagues that he described as “just below the NBA — guys that didn’t make the NBA got lifelong jobs with these industries and played basketball.”

He spent two years in Chile as an advisor to that country’s Olympic basketball program.

When he finally returned to his Charleston hometown in the mid-1950s, Nearman would get his basketball fix at the YMCA, playing with and against current and former college players during their lunch hour.

“There was always a game, every day at noon we’d all go up there and play,” Nearman said.

The best of those players would travel north to take on the best players in Wheeling, which had an established amateur league.

“Earl Lloyd, Ike Smith, the Beverly brothers from South Charleston, we put a team together and went up to Wheeling and played their all-star team,” Nearman said. “When we got there, we thought, ‘Why don’t we have our own summer league here?’”

And that’s what they did, with Nearman serving as the director of the league that played its games from 1958 to 1960 at the outdoor courts in Kanawha City, where the Schoenbaum Tennis Courts now stand.

“The city put up stands, and the stands would be full all summer,” Nearman said.

The attraction? The best amateur talent in the state flocked to Kanawha City to play.

Alas, at some point the NCAA initiated a rule that said if a college player participated in such summer leagues, they’d be ineligible to play college ball. The league continued, but without the attraction of the college stars.

Nearman’s devotion to getting out on the basketball court continued unabated. While most sporting men his age were playing golf or tennis, Nearman remained an avid hoopster.

In 1988, then in his early-60s, Nearman was apprised of a West Virginia Senior Games tournament in Huntington. He put a team together with five of his cohorts from the Y, all of a similar age, and they won the state championship for their age group.

That earned the team a trip to the national Senior Games competition in Baton Rouge, Louisiana ... and they won the gold medal there, too, in the 60-64 age group.

It was the first of four Senior Games golds Nearman won, followed by another in San Antonio in the 65-69 age group, another in Orlando, Florida (70-74), and one more in Pittsburgh (75-79).

After Nearman’s team won that first national championship, the state Senior Games were moved from Huntington to Charleston. Not surprisingly, the always-accommodating Nearman was selected as president of the board of directors of the West Virginia Senior Sports Classic, a post he held for four years.

Nearman and his buddies continued competing in the state and national tournaments until his last one in Cleveland at age 90.

Nearman spends his time now in Kanawha City with his wife of 55 years, Rita, and the countless friends and relations that he’s come across in his long, fulfilling life.

His thoughts are always infused by the game that he loved.

“I guess you could say basketball was my life,” Nearman said. “It was my gateway to humanity. That was what I did. It was fun.”

Considering cutting the cord? It’s easier than you think