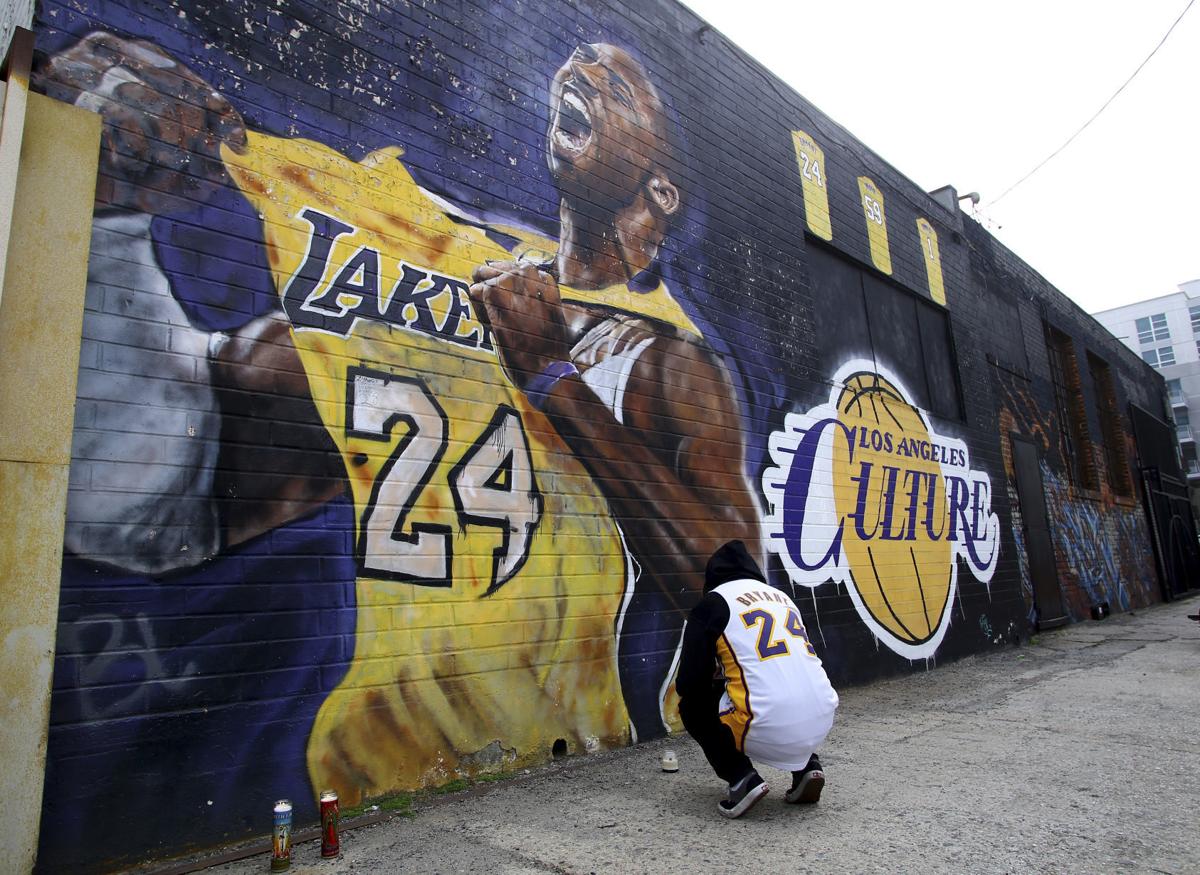 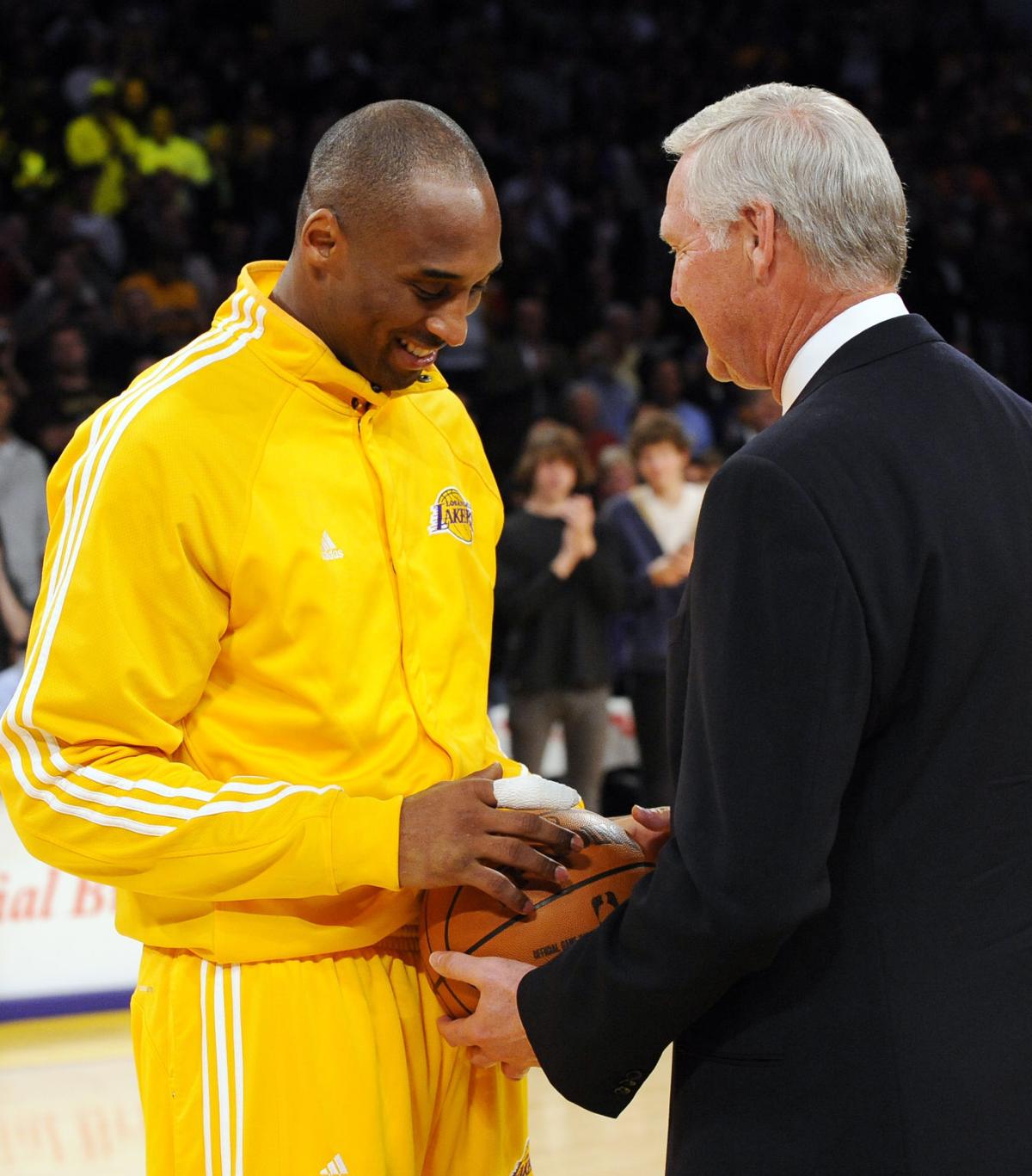 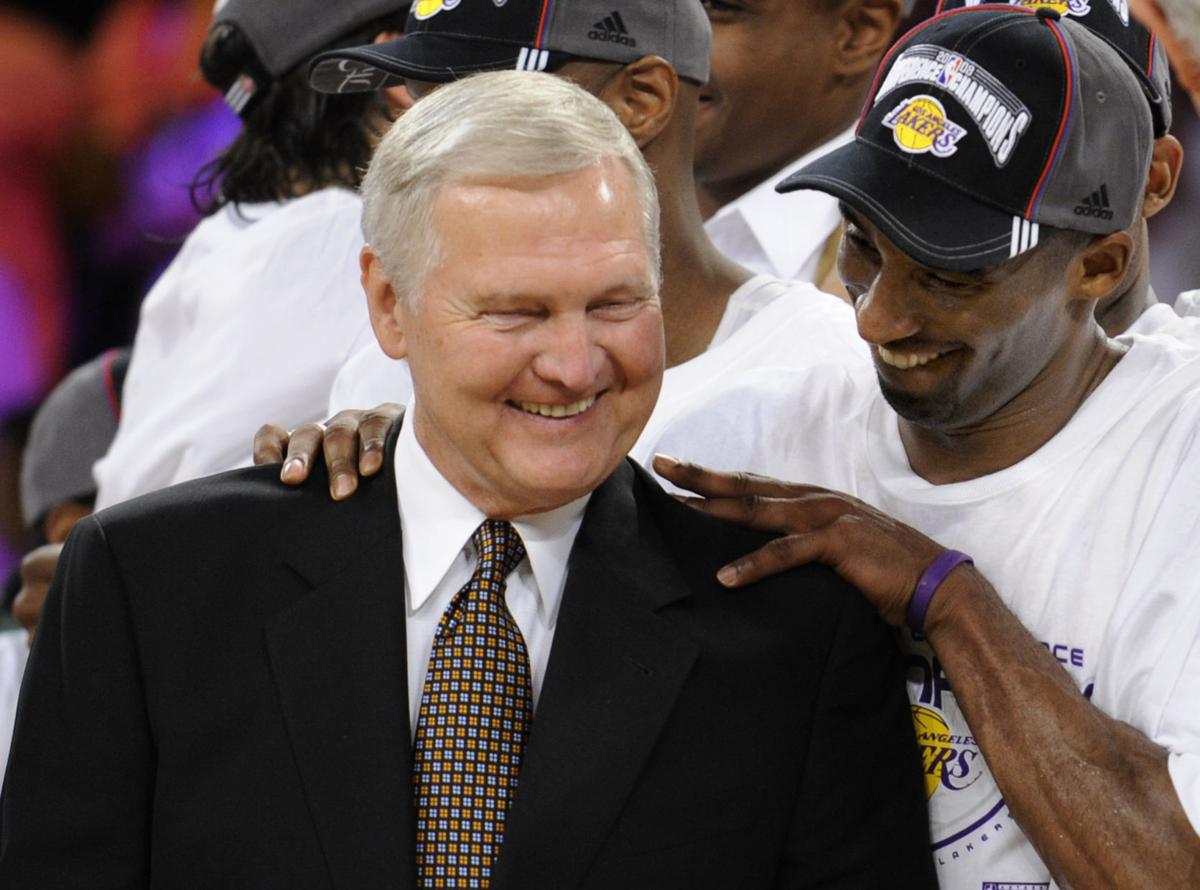 FILE - In this May 29, 2008 file photo, Los Angeles Lakers' Kobe Bryant gives basketball great Jerry West a shoulder rub after the Lakers beat the San Antonio Spurs in Game 5 of the NBA Western Conference basketball finals in Los Angeles. When asked about the latest honor in a long series of enshrinements and accolades since West hung up his sneakers in 1974, the longtime Los Angeles Lakers guard and executive seemed to be anticipating his trip to Kansas City to be inducted into the National Collegiate Basketball Hall of Fame with something between cautious excitement and outright dread. (AP Photo/Kevork Djansezian, File)

FILE - In this May 29, 2008 file photo, Los Angeles Lakers' Kobe Bryant gives basketball great Jerry West a shoulder rub after the Lakers beat the San Antonio Spurs in Game 5 of the NBA Western Conference basketball finals in Los Angeles. When asked about the latest honor in a long series of enshrinements and accolades since West hung up his sneakers in 1974, the longtime Los Angeles Lakers guard and executive seemed to be anticipating his trip to Kansas City to be inducted into the National Collegiate Basketball Hall of Fame with something between cautious excitement and outright dread. (AP Photo/Kevork Djansezian, File)

I sat down on Sunday afternoon to write a column about Bob Huggins and his secure place in basketball history, fresh off tying Adolph Rupp on the NCAA’s all-time wins list on Saturday, but I couldn’t stop thinking about Kobe Bryant.

Bryant, as I’m sure you’ve heard by now, was one of nine people who died in California helicopter crash on Sunday. His 13-year old daughter Gianna, also died in the crash.

He was so good at basketball, he turned into one of those people who only needs one name. All you had to say was, “Kobe” and there was no mistaking who you were talking about.

I was 12 when he came into the NBA straight out of high school in 1996, and almost immediately Kobe became an inescapable topic of conversation in the lunchroom or on the playground. He was supposed one of several heir apparent to “His Airness” and for the most part he delivered. I remember more than a few lunchroom arguments about who was going to be the best player in the NBA after Michael Jordan retired, but none of those other guys — Kevin Garnett, Allen Iverson, Vince Carter among others — had the career Kobe Bryant did. All those guys had great careers, but none of them were Kobe. Not even close.

For the two decades that followed, Kobe Braynt was inescapable if you were a sports fan. Don’t forget, it was Kanawha County’s own Jerry West who pulled off the deal to bring Bryant to the Los Angeles Lakers after being drafted by the Charlotte Hornets. Once a player of Kobe’s talent and drive was paired with that franchise in that city, how could you avoid him?

So for two decades, if you were even a casual sports fan you were bombarded with Kobe Bryant. He was known as the can’t miss prospect, then anointed the next great one. When he was paired with Shaquille O’Neal, the Lakers started winning world championships and his profile got even bigger. Bryant was everywhere — television, advertisements, endless SportsCenter highlights. The drama that broke up that great run of Laker teams was fascinating and the media made sure we all heard every slight or jab lobbed between the Kobe and Shaq camps.

Of course, any discussion of Bryant’s legacy has to mention the sexual assault charges he faced in Colorado. He was never found guilty, but did go through with an out of court settlement with his accuser during the civil suit.

Kobe went to work rehabilitating his image and reputation, and what always stuck out to me was that he always seemed genuine in that endeavor. He won more championships in the back half of his career, and his place among the all-time greats became the new argument among friends. Is Kobe better than Jordan? Is Kobe top five all-time? Who is on your NBA Mount Rushmore?

That was the unavoidable line of conversations at the watercoolers and bar stools where I worked and often sat in the twilight of Bryant’s career. When he retired, it was to great fanfare and deservedly so.

I was never a Kobe guy, so while I was certainly aware of what Bryant accomplished on the court I never felt that special connection sports stars make with fans. That’s why when I received two text messages on Sunday — “omg” and “kobe” — and ran to the internet only to learn Bryant died in a fiery helicopter crash, I was surprised how hard the news hit me.

Scrolling through my social media timelines, the world stopped for a few hours as the tidbits of news trickled out about the crash, and between those nuggets was (mostly) an outpouring of love, grief and respect for Bryant and his daughter. He seemed like a good dad. He wasn’t one of those old-timers who resented the next generation, evident by his praise for LeBron James passing him on the NBA’s all-time scoring list the day before he died. It made me realize just how much Kobe Bryant was a part of our lives for not just sports fans, but for a generation of people

We, and by we I mean sports fans, will get over this like we did those two sudden, high-profile deaths. But like Earnhardt and Clemente, we will never forget all of the great moments and passion we were fortunate to witness from Kobe Bryant.

So the next time you go to throw away a wadded up piece of paper, or you have a sock in your hand and are looking for a hamper, do what I know most of you have all done at least a time or two before — line up the shot, leave that arm in the air just a few seconds too long and shout, “Kobe!” when you hit the target.