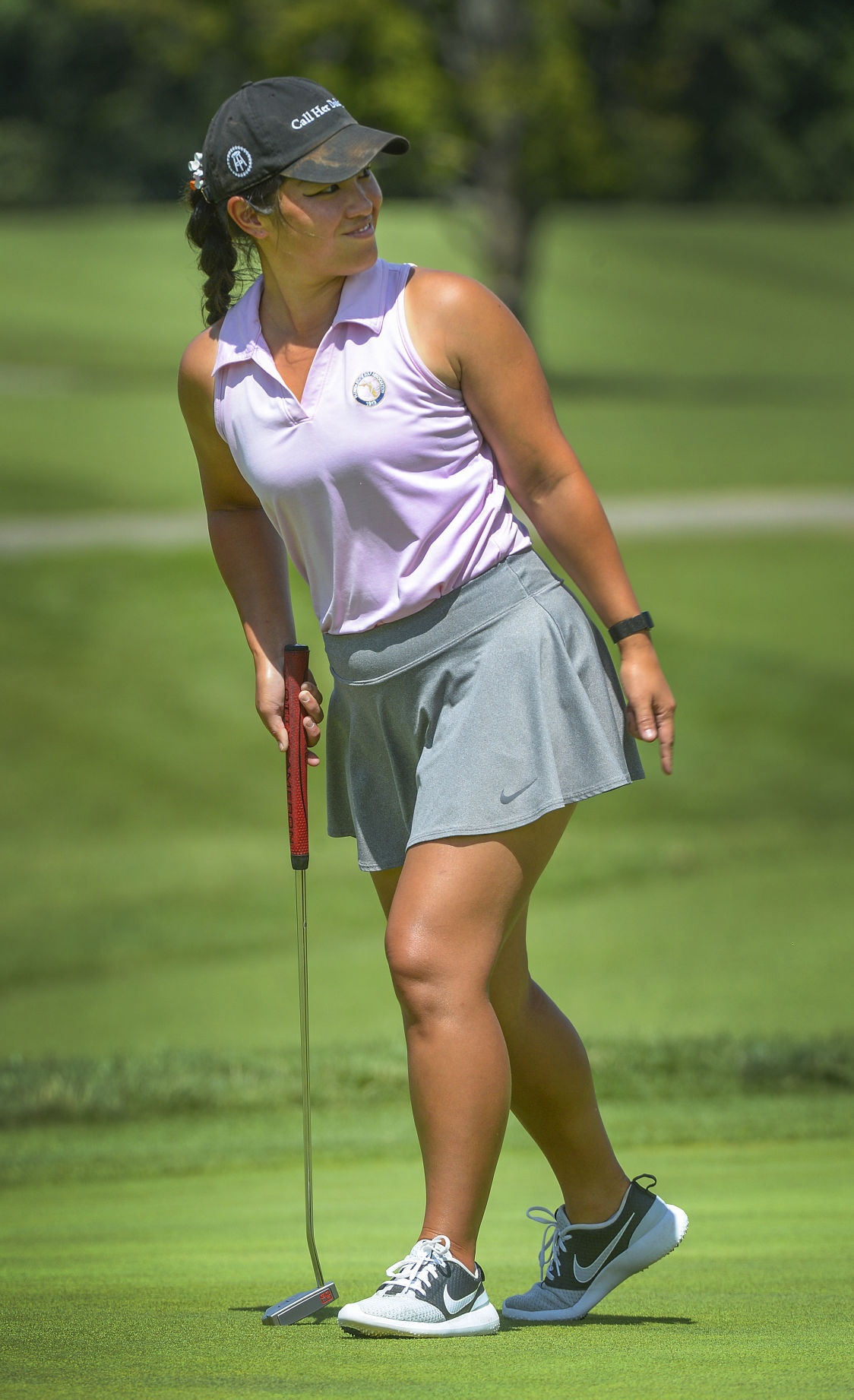 Cathleen Wong smiles after sinking a putt on her way to the West Virginia Women’s Amateur title Tuesday at Berry Hills Country Club. 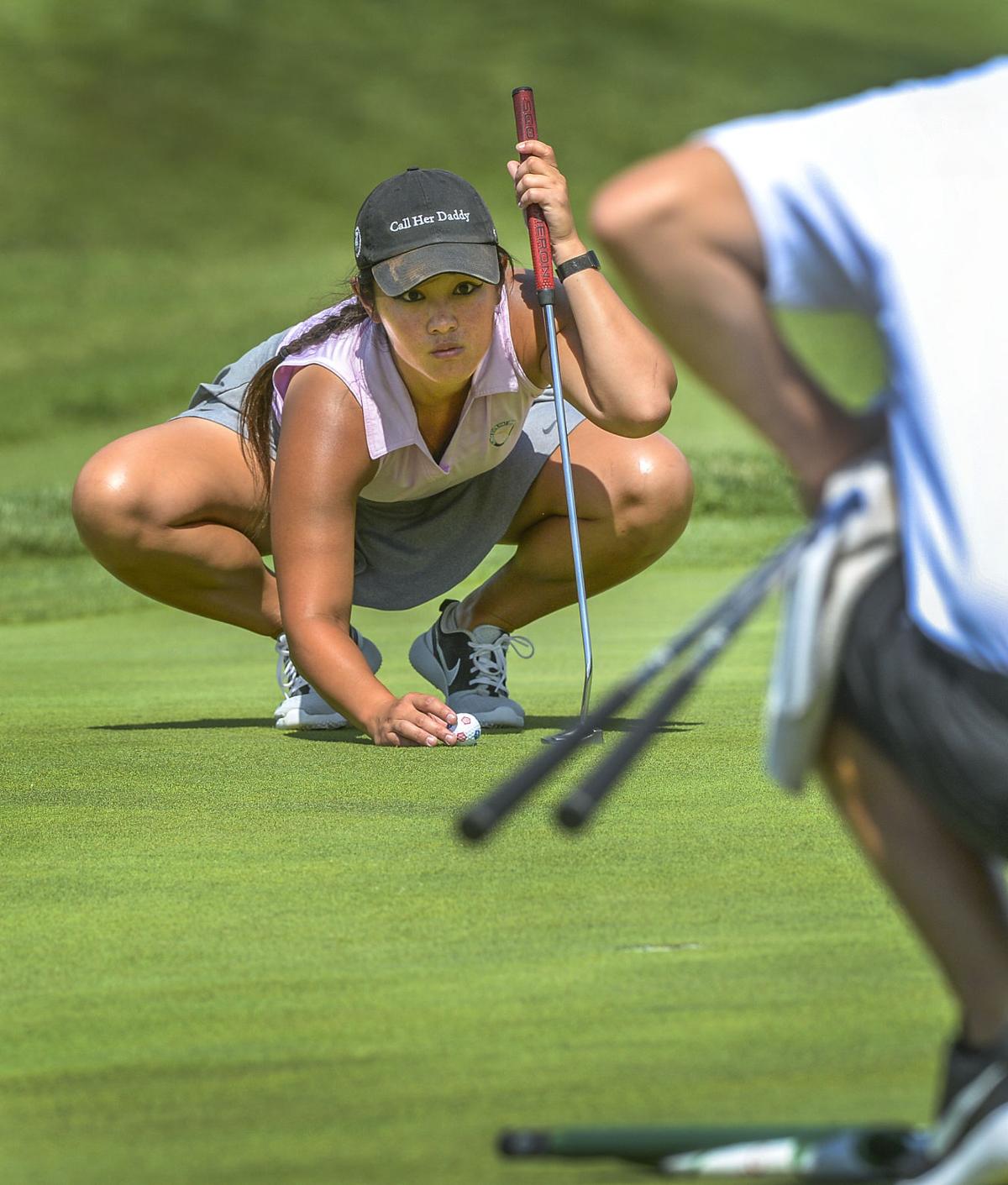 Cathleen Wong lines up a putt on the No. 9 green with the help of her caddy during the West Virginia Women’s Amateur tournament Tuesday at Berry Hills Country Club.

Cathleen Wong smiles after sinking a putt on her way to the West Virginia Women’s Amateur title Tuesday at Berry Hills Country Club.

Cathleen Wong lines up a putt on the No. 9 green with the help of her caddy during the West Virginia Women’s Amateur tournament Tuesday at Berry Hills Country Club.

Cathleen Wong hasn’t spent a lot of time in West Virginia in her life, but in the past three days she made sure her name was known at Berry Hills Country Club.

Wong took a first-round lead, lost it and then mounted a comeback to win the 98th West Virginia Women’s Amateur golf championship on Tuesday.

Wong, who was born and raised in Singapore before moving to Parkersburg, entered the final round of the tournament down a stroke to Huntington’s Susan Glasby, but shot an even-par 70 — her best round of the tournament — Tuesday to finish with a 5-over-par 215 for the three rounds and win her first Women’s State Amateur by three strokes.

Glasby was the runner-up with an 8-over-par 218, and former George Washington and current Marshall golfer Torren Kalaskey finished third at 9-over 219.

Wong said she was up against good competition and had to bring her best in order to win.

“I’ve heard a lot about Susie [Glasby],” Wong said. “She hits [the ball] a good 300 yards, so knowing that [there] are strong competitors, I had to come in and play my best game and really put up a fight. Just having that mindset of I have to have my ‘A’ game if I want [to] remotely have a chance of winning.”

Glasby and Kalaskey reiterated Wong’s sentiment about tough competition at the top of the field.

“Between me, Torren and Cathleen, it was kind of tough,” Glasby said. “It was back and fourth — it has been over the three days. There was definitely some good competition.”

“It was great,” Kalaskey said. “We had three great rounds together and it was super fun. Even in the last round we were all super close and we just had a good time still.”

In her final round, Kalaskey shot her career-best score at Berry Hills of even-par 70. That score also tied Wong for the lowest round of the tournament.

“It was really fun, I liked the comeback,” she said. “I shot 5 over [in the first round] and 4 over [in the second round] and then even [in the final round]. It was a fight to keep a decent score. [Tuesday] was my lowest round at Berry, so it was a good time to have that.”

Finishing in fourth place at 26 over par (236) was Hurricane High School sophomore Savannah Hawkins, one of the youngest players in the field. Rounding out the top five was Rayland’s Emily Holzopfel with a score of 28 over (238).

In the second round, Holzopfel fell behind after shooting a 79 while Wong, Glasby and Kalaskey had scores of 74, 72 and 74, respectively.

Going into round three, Wong, Glasby and Kalaskey were the only ones in the field who were lower than 10 over par as they pulled away from the pack.

Wong got off to a shaky start every day of the tournament as she bogeyed the first and second holes in all three rounds. She always found a way to rebound, though.

For example, after three straight bogies to start the tournament, Wong did not bogey the next 15 holes, making par on 13 of them and birdie on two.

In the second round, Wong bogeyed six of her first seven holes — including a double-bogey on No. 4 — to allow Glasby to gain some strokes and take the lead by a stroke heading into the final round.

“I had rough first two holes every single day,” Wong said. “I’m shaky, I get really nervous. Thankfully I had a really good caddie on my bag today that helped me calm my nerves.”

The third round was Wong’s strongest and she had a remarkable sort of repeat of her first round. She bogeyed the first two holes and made par or better on the remaining 16.

“I had a perfect 8 iron into [hole 3] and finally stuck one and didn’t make bogey on 3 for the first time all week,” Wong said. “It was a good turning point for the rest of my round.”

Even though she didn’t hold on to the lead, Glasby was in good spirits and said she thought she played well.

“It was good,” Glasby said. “It was fun. It was good to have the lead after two days. I felt good coming in. I was really nervous today for the first three holes. After that I kind of settled down and waited for a good break.”

Kalaskey and Hawkins have college and prep seasons in their future and they both said they are going to use their experience from this tournament to help them in future golf endeavors.

“I’m excited [to get back to Marshall],” Kalaskey said. “It’s been a few weeks or months since my last tournament. It just shows me how much fun I have competing. I know I can go low, I had three decent rounds. Hopefully I can get it lower for my seasons at Marshall.”

“This is a really good preparation for that,” Hawkins said. “Just getting reps during the summer will have me ready for high school golf. Cathleen and Susan and Torren — it’s nice to look up to older people and I like to play with people who I know can beat me.”