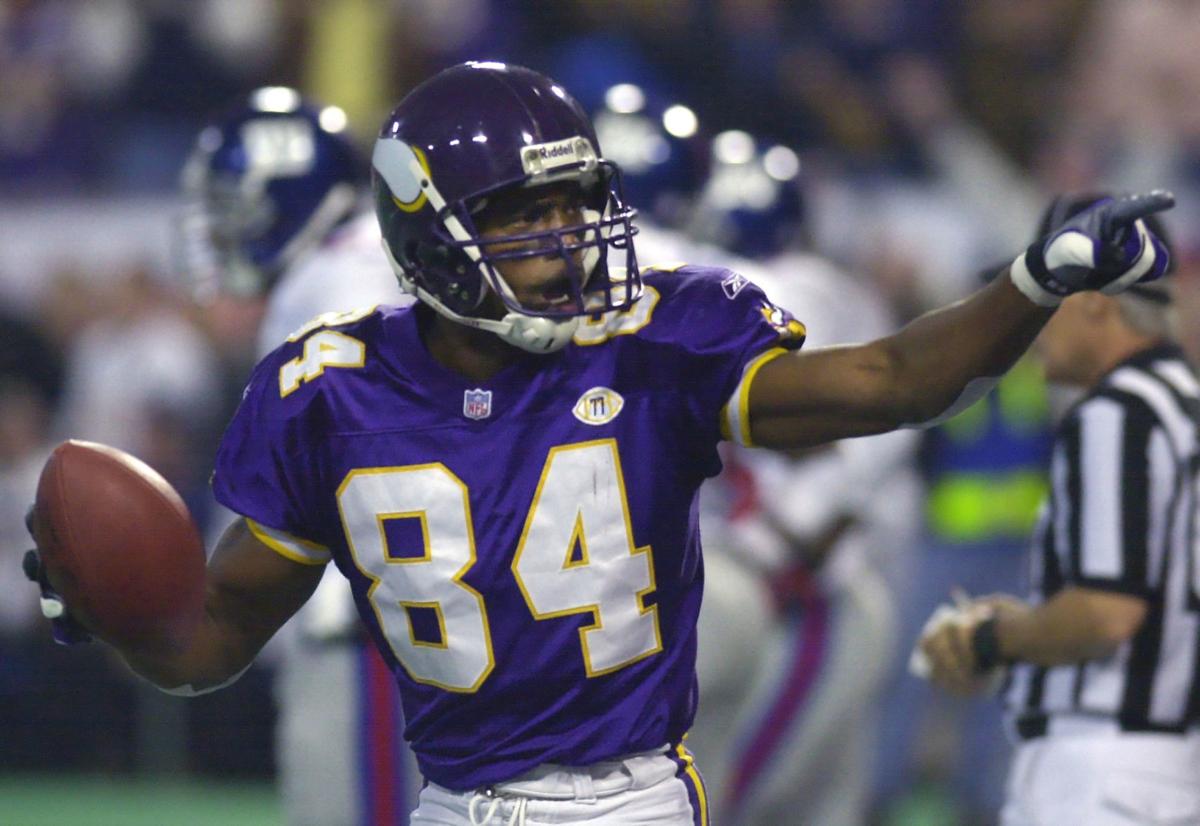 As a member of the Minnesota Vikings, Randy Moss celebrates one of his 156 career touchdown catches, ranked second in NFL history behind Jerry Rice. 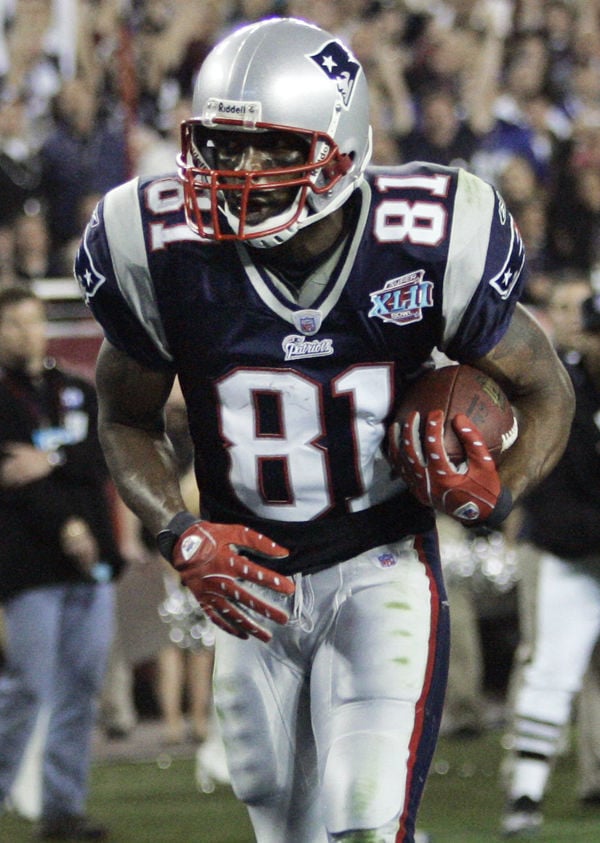 Randy Moss went to the Super Bowl during his stint with the Patriots. He scored a touchdown in the loss to the Giants. 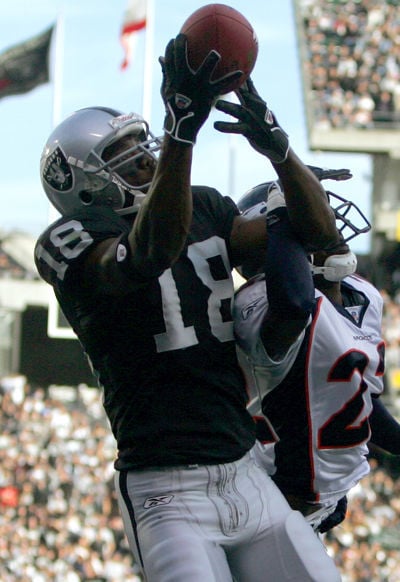 While a member of the Oakland Raiders, Randy Moss catches a touchdown pass against Denver in 2005. 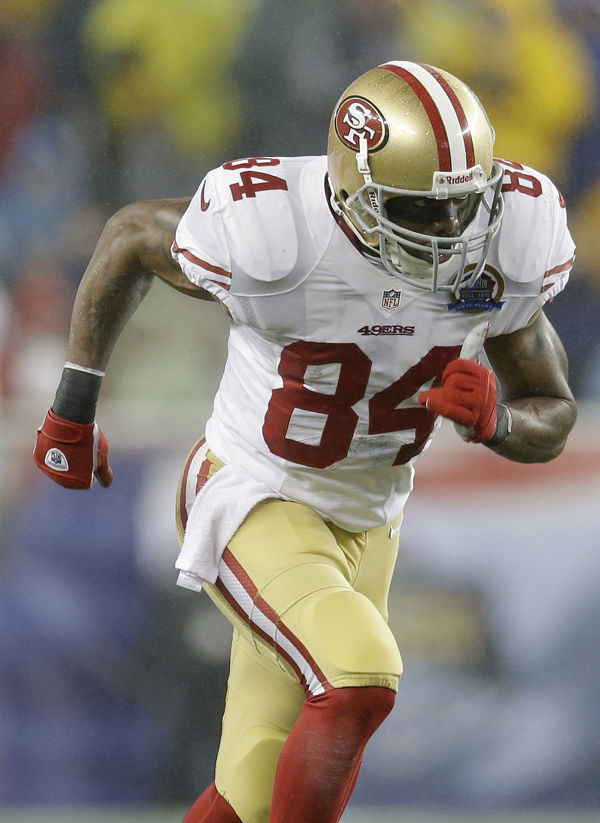 Randy Moss spent his final NFL season with the San Francisco 49ers in 2012. 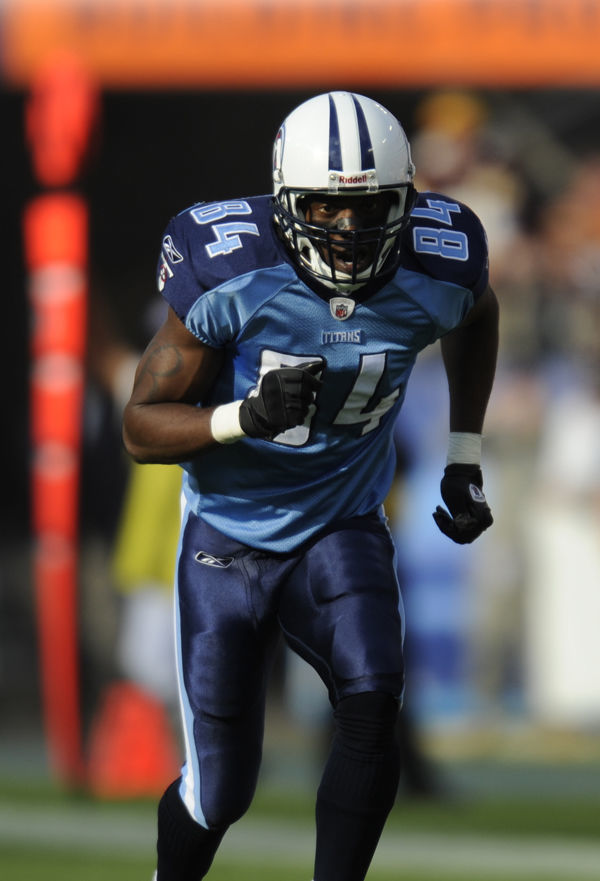 Randy Moss played with three teams in the 2010 season, finishing up with the Tennessee Titans.

As a member of the Minnesota Vikings, Randy Moss celebrates one of his 156 career touchdown catches, ranked second in NFL history behind Jerry Rice.

Randy Moss went to the Super Bowl during his stint with the Patriots. He scored a touchdown in the loss to the Giants.

While a member of the Oakland Raiders, Randy Moss catches a touchdown pass against Denver in 2005.

Randy Moss spent his final NFL season with the San Francisco 49ers in 2012.

Randy Moss played with three teams in the 2010 season, finishing up with the Tennessee Titans.

Editor’s note: This is the third in a series of stories chronicling the journey Randy Moss took from the small town of Rand to the Pro Football Hall of Fame. Moss will be inducted into the Hall of Fame on Saturday night.

Gil Brandt sat as the 1998 NFL draft began. It was the nascent years of the internet, and the former vice president of player personnel for the Dallas Cowboys was working as a draft analyst and fielding questions online.

Moss, who had been named a first-team All-American and won the Biletnikoff Award as at Marshall, was in Brandt’s top 10. It was a draft that included stars like Peyton Manning and Charles Woodson. Yet, as that draft unfolded, it became obvious that Moss, saddled with what teams considered red flags, wouldn’t land in the top 10.

Finally, a team, the Tennessee Oilers, submitted a wide receiver pick. It just wasn’t the one everyone assumed.

With the 16th pick of the 1998 NFL Draft, the Tennessee Oilers selected …

“I just couldn’t understand that one,” Brandt said.

Moss finally came off the board at the 21st pick, where the Minnesota Vikings made him a professional football player. In turn, Moss made a chorus line of NFL franchises sorry for passing him up.

On Saturday, the Rand native will receive the league’s highest honor, induction into the Pro Football Hall of Fame in Canton, Ohio.

It’s an accolade well deserved for a player his coaches and teammates praise not only for his spectacular play, but his knowledge of the game and humor in the locker room as well.

Moss finished his NFL career second all-time in touchdown catches (156) and fourth in receiving yards (15,292). No receiver has ever caught more touchdown passes as a rookie (17) or in any single season (23). Much of that comes from his legendary combination of physical attributes — a 6-foot-4 frame that recorded a 4.38-second 40-yard dash and 33-inch vertical leap at the NFL combine and featured a pair of the best hands in the game.

Yet Moss’ intelligence, his study of opposing defensive backs, ability to judge what they might do and remember how they defended him seasons ago is universally praised as one of the most important traits he had.

“He’s the smartest non-quarterback I’ve ever coached,” said Houston Texans head coach Bill O’Brien, an offensive assistant in 2007 and receivers coach in 2008 during Moss’ stint with the New England Patriots. “I don’t think people talk about it enough.

“You see big guys who can run and guys with great hands,” O’Brien continued, “but if they don’t know what to do and they don’t have that [intelligence] to be able to collect that information in their mind and use it on the field and have great recall of what happened five years ago … that’s what Randy had.”

Wes Welker, a Texans offensive assistant who spent six seasons with the Patriots as a receiver, saw it first-hand in the position room. He could see the wheels turn faster for Moss, how he could discuss and analyze any aspect of the game. When coaches laid out what opposing defenses were preparing to do that week, Moss absorbed it quickly.

“The game just really made sense to him,” Welker said. “He’s a student of the game. It just seemed like he really didn’t have to work at that part. It just came naturally to him.”

Texans defensive coordinator Romeo Crennel, who had to prepare for Moss over his decades as an NFL coach, added another attribute — tenacity.

“He has a toughness that a receiver has to have to go get the ball,” Crennel said. “That was his nature. He wanted the ball to come to him. And when it did, he’d go get it.”

While Moss was a nightmare for opposing teams, Welker and O’Brien said he was a fantastic teammate. Moss loved the camaraderie of the locker room and loved cutting up with everyone who called the locker room home.

That personality and humor is why they believe his star rose so quickly as a studio analyst. He spent three years working for Fox Sports before joining the studio lineup on ESPN’s “Sunday NFL Countdown” and “Monday Night Countdown” in 2016.

“It was funny, man,” Welker said. “There are so many good memories and stories, a bunch of good locker-room fun that Randy was a big part of. There’s so much funny stuff that comes out of his mouth, it had us all rolling.”

O’Brien remembers the days with Moss in the Patriots locker room, watching him bust the chops of players and coaches alike and listening to him tell stories about his life in football.

“He loved the locker room and loved his teammates,” O’Brien said. “That brought out the joy in him.”

When Moss takes the podium in Canton on Saturday, it will be one more celebration of one of the greatest careers in pro football history. Memories will return of the spectacular performances, the one-handed catches and the dominance he enjoyed sprinting down the sideline, his hand waving in the air after getting a step on a defensive back, usually the only step he needed.

Such ability was hard to defend, as Crennel could attest. He never chewed out a corner too badly if Moss exploited him. That corner was just one of many who Moss put on the business end of his career highlight reel.

“All you can do then is tell the guy is to be as competitive as you can,” Crennel said, “and make the quarterback have to make a great throw and Randy make a great catch.