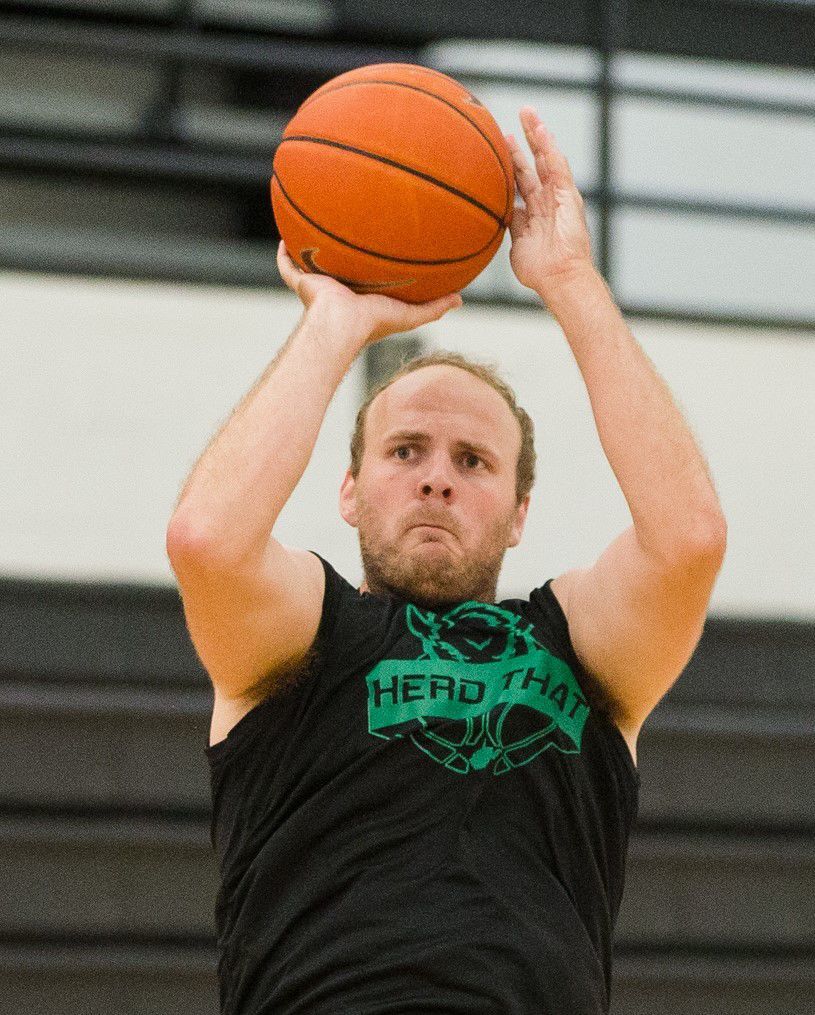 Ot Elmore puts up a shot during a Herd That practice in preparation for the 2020 The Basketball Tournament. 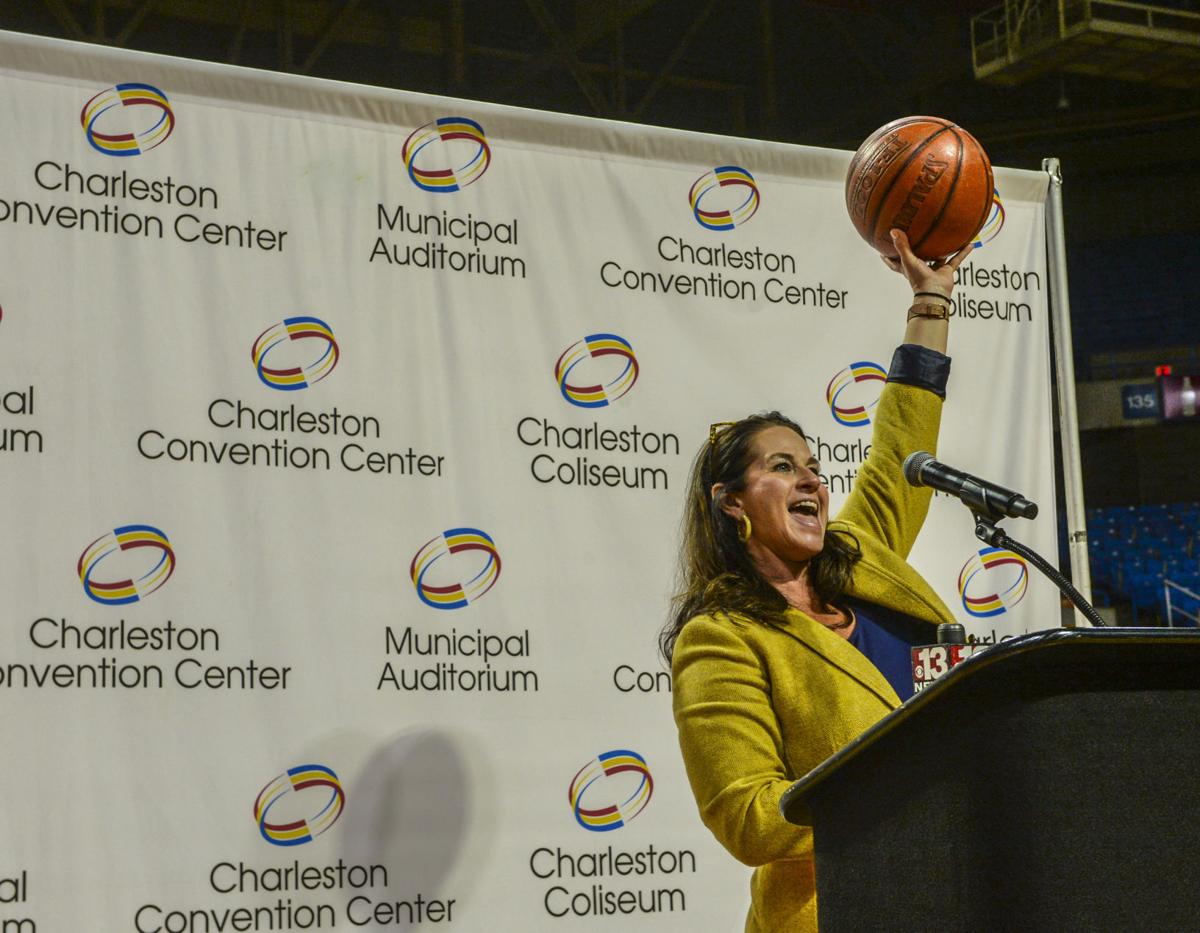 Charleston Mayor Amy Goodwin holds up a basketball while announcing the The Basketball Tournament, better known as TBT, will come to Charleston July 17-21.

Ot Elmore puts up a shot during a Herd That practice in preparation for the 2020 The Basketball Tournament.

Charleston Mayor Amy Goodwin holds up a basketball while announcing the The Basketball Tournament, better known as TBT, will come to Charleston July 17-21.

The Elmore brothers, Ot and Jon, grew up playing basketball as kids in Charleston, dreaming of making the big stage.

On Wednesday afternoon, The Basketball Tournament (TBT) announced Charleston as one of four regional sites for the 2021 version, which will bring national exposure to the Mountain State.

Fans in Charleston and the surrounding areas get the opportunity to see alumni teams representing both Division I programs within the state as Best Virginia — the West Virginia University alumni team — and Herd That — Marshall’s alumni team — serve as featured teams in the 16-team regional that will take the floor of the Charleston Coliseum and Convention Center from July 17-21.

Ot Elmore, who also serves as Herd That’s general manager, burst onto the scene in the 2020 TBT when he went viral for his play and showmanship as his team advanced to the quarterfinals, where they fell to Overseas Elite, as TBT founder/CEO Jon Mugar pointed out.

That national interest and the rabid fan bases of both Mountain State alumni teams factored into Mugar making sure that Charleston was one of the regional host sites.

“Ot Elmore lit the basketball world on fire last July when he squared off against Joe Johnson during Herd That’s exciting run through TBT 2020,” Mugar said. “We can’t wait to see him play in front of the Marshall faithful in Charleston. Between them and West Virginia fans coming out to see Best Virginia, we expect a lively atmosphere and we can’t wait to experience it alongside our partners at the Charleston Coliseum.”

Elmore is also excited to bring high-level basketball excitement to Charleston for fans in West Virginia to experience.

“Charleston is home for us,” Elmore said. “A majority of our squad was born in this area and still live here. Those that come from other places have been adopted not only by Marshall fans, but the local people as members of the community. We look forward to competing in front of our home fans and packing out the Coliseum during our run to the $1 million prize for winning TBT.”

Charleston was supposed to host a regional in TBT 2020, but COVID-19 forced the tournament to downsize from 64 teams to 24, with Columbus, Ohio, being the lone host in a bubble-type atmosphere.

Best Virginia and Herd That were not only chosen as two of the 24 teams, but they were scheduled to battle in the opening round before COVID-19 positives knocked Best Virginia out of the competition.

With sporting events in the COVID-19 era starting to normalize again, Charleston finally gets its chance to host the tournament, and both in-state teams will split allegiances in the state, making for a fun, energetic atmosphere.

“We can’t wait to bring Best Virginia to TBT in Charleston this year,” said Best Virginia general manager/player John Flowers. “The last year has been tough on everyone. We can’t wait to play in front of our fans again, and hopefully bring a little happiness and normality during the regional. Until we can be together in July, let’s all be safe and look out for each other so we can have some fun this summer.”

This week, Jon Elmore — Marshall’s all-time leading scorer — is preparing for a potential postseason run in Hungary with Soproni KC of the Hungarian Nemzeti Bajnoksag (national championship) — the highest league in that country.

That didn’t keep Elmore from having his mind on home and getting to represent Marshall again in TBT, which has a contract to be nationally televised by ESPN.

“It’s a phenomenal opportunity to have Charleston, West Virginia hosting such a big event,” Elmore said. “TBT is the premier basketball tournament of the summer and it’s a great opportunity to showcase our great state. It’s going to be fun getting the Herd That group back together.”

Former professional and college standouts make up the rosters of the entrants, which features an open application process that allows teams to apply from May 1 to June 15. The 64-team single-elimination bracket will be announced on June 28.

The West Virginia Regional, as it is being dubbed, is one of four regional sites, joining Wichita, Kansas; Columbus; and Peoria, Illinois.

Two teams will advance out of each regional to championship weekend in Dayton, Ohio. The quarterfinals take place on July 31 and semifinals are on Aug. 1 before the $1 million winner-take-all championship on Aug. 3.