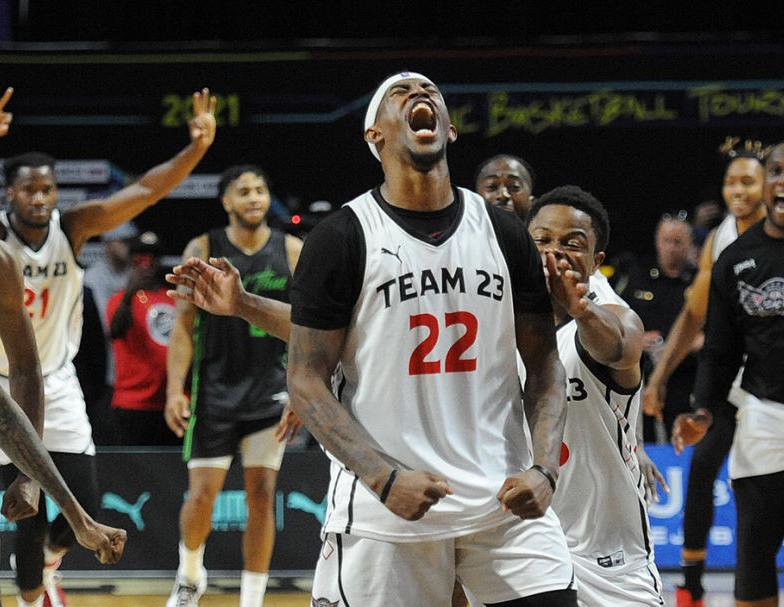 Team 23 celebrates after Craig Sword (22) scored the game-winning basket to defeat Herd That in a second-round TBT game on Monday night at the Charleston Coliseum. Herd That’s Jon Elmore (33) and JaCorey Williams (22) react under the basket. 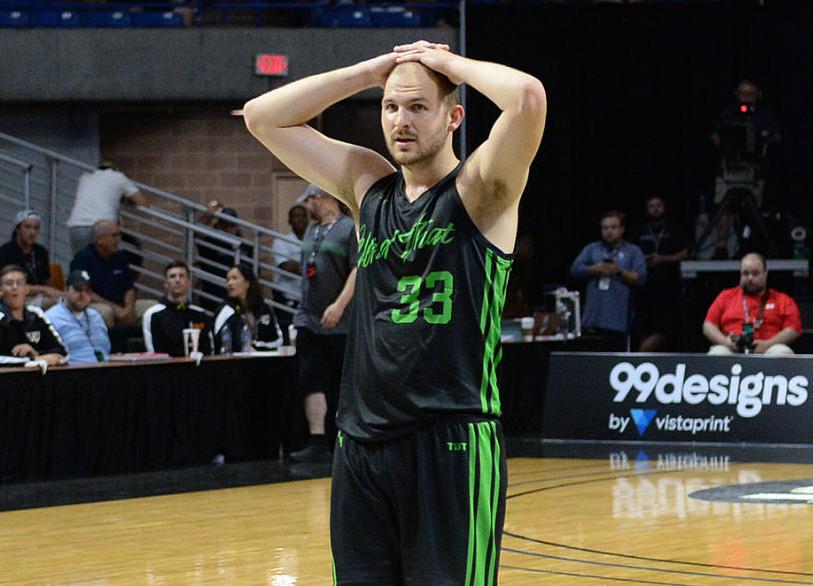 Herd That’s Jon Elmore reacts after Team 23 defeated his team 74-71 during a second-round TBT game Monday at the Charleston Coliseum.

Team 23 celebrates after Craig Sword (22) scored the game-winning basket to defeat Herd That in a second-round TBT game on Monday night at the Charleston Coliseum. Herd That’s Jon Elmore (33) and JaCorey Williams (22) react under the basket.

Herd That’s Jon Elmore reacts after Team 23 defeated his team 74-71 during a second-round TBT game Monday at the Charleston Coliseum.

Team 23 rammed a Sword through the heart of Herd That.

Craig Sword, a point guard out of Mississippi State, made a 3-point shot as the shot clock expired to give Team 23 a 74-71 victory over the team of mostly former Marshall University players in the second round of The Basketball Tournament Monday night at the Charleston Coliseum.

Herd That rallied from a 14-point second-half deficit to tie the game at 71-71 before Sword’s heroics.

“They’re a good team, credit to them,” Herd That star Jon Elmore said. “We shot ourselves in the foot with a slow start. We came up a little bit short, but that was a heck of a game.”

Team 23 entered the Elam Ending portion of the contest with a 64-62 lead. The first team to 72 points would win.

Team 23 led 71-69 before the game wrestled with the crowd’s emotions. Herd That’s Rondale Watson took a charge from former NBA player Walt Lemon Jr. to give Herd That the ball. Elmore pulled up for a 3-pointer, but 6-foot-9 former Campbell University star Eric Griffin blocked his shot. Elmore got his team the ball back when he tied up Dakarai Tucker to force a change of possession.

Herd That’s JaCorey Williams drove to the basket for a dunk that tied it 71-71 as the several thousand fans erupted. Elmore, as well as former Marshall player Stevie Browning, said Williams made the right play instead of waiting for a 3-point opportunity to win it.

“You want to hit the 3, but take what they give you,” Elmore said before Browning interrupted with, “You can’t pass up the open dunk.”

The next play appeared to justify that thinking. Team 23 turned the ball over, giving Herd That the opportunity to win, but Herd That also committed a turnover. Team 23 then drove the lane, only to have a contingent of Herd That players tie up the ball again. This time, however, the possession arrow pointed to Team 23 with two seconds left on the shot clock.

Sword took the inbound pass then quickly and calmly swished a 23-footer to give his team the win.

“I take shots like that in practice every day,” Sword said. “I was confident. I knew it was going to go in.”

Team 23 coach Marc Hughes said he was confident in Sword, who made all five of his shots and both free throws.

“Craig is such a patient young man who allows me to play him how I want to play him,” Hughes said. “He makes big plays and he made a big play down the stretch. He saved us tonight, made big plays, made big shots.”

Sword came off the bench to score 13 points for a quick, talented team that was adept at creating open shots and kept Herd That from getting in a rhythm with deflections. Team 23’s bench outscored Herd That’s 30-4.

That bench, though, nearly cost Team 23 the game.

“One of their dudes on the bench started talking crazy,” Elmore said. “I don’t know if he knew who he was talking to, but he made a mistake. I should’ve started earlier. I started cramping up a little bit.”

The player who fired up Elmore watched him score 10 consecutive points and his team’s next 15 to shave a 14-point deficit to four.

“I’m from Logan,” Browning said. “It’s a fun environment. They like to talk and I like to talk back. We just started our run too late.”

“This is a great group of guys to play with,” Elmore said. “We look forward to doing it again.”

“They’re athletic, long and a lot of high-level players,” Elmore said of Team 23. “I should have limited turnovers. You want to win. I hate to lose it, a heartbreaker, but it was fun.”