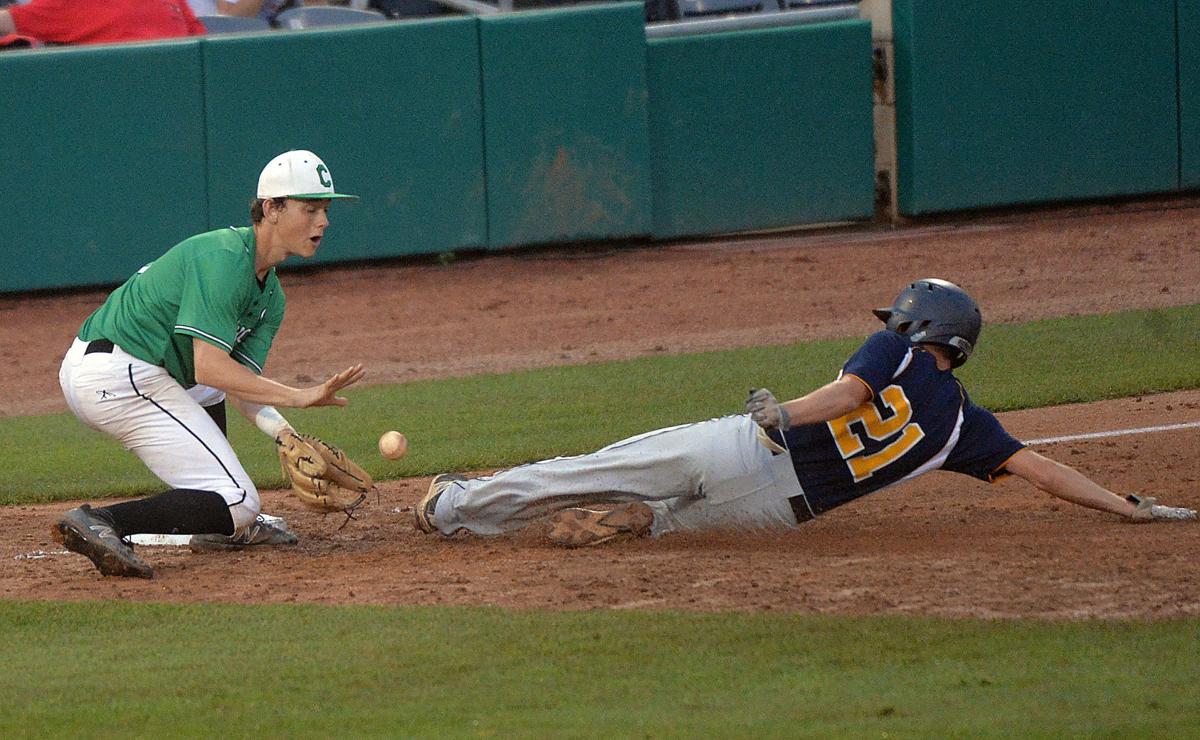 Moorfield’s Thomas Williams slides safely into third as Charleston Catholic’s Jacob Hufford waits for the throw during a 2018 Class A state tournament game at Appalachian Power Park. Hufford hasn’t played in a game for the Irish since then, missing 2019 with an injury and 2020 due to the coronavirus shutdown. 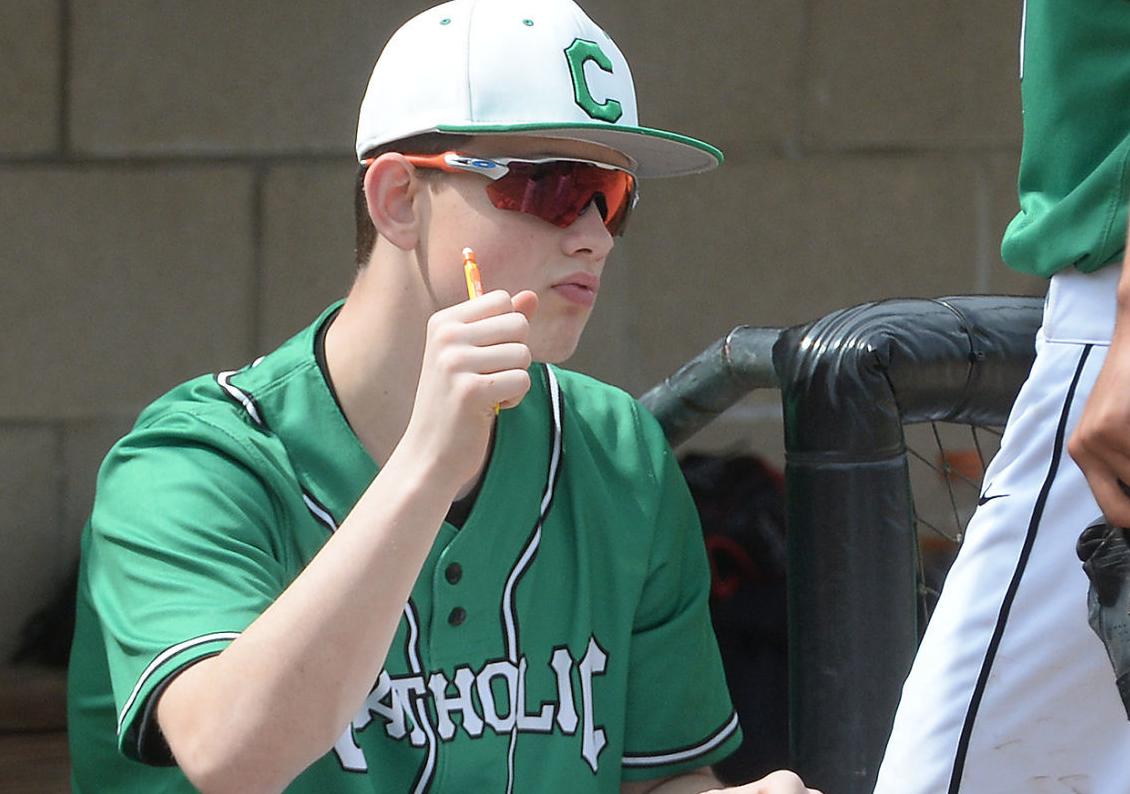 Charleston Catholic’s Jacob Hufford sits next to the dugout with a brace on his leg during the 2019 season. Hufford, a first-team all-stater as a freshman in 2018, was recovering from a torn ACL and kept the team's pitching charts that season. 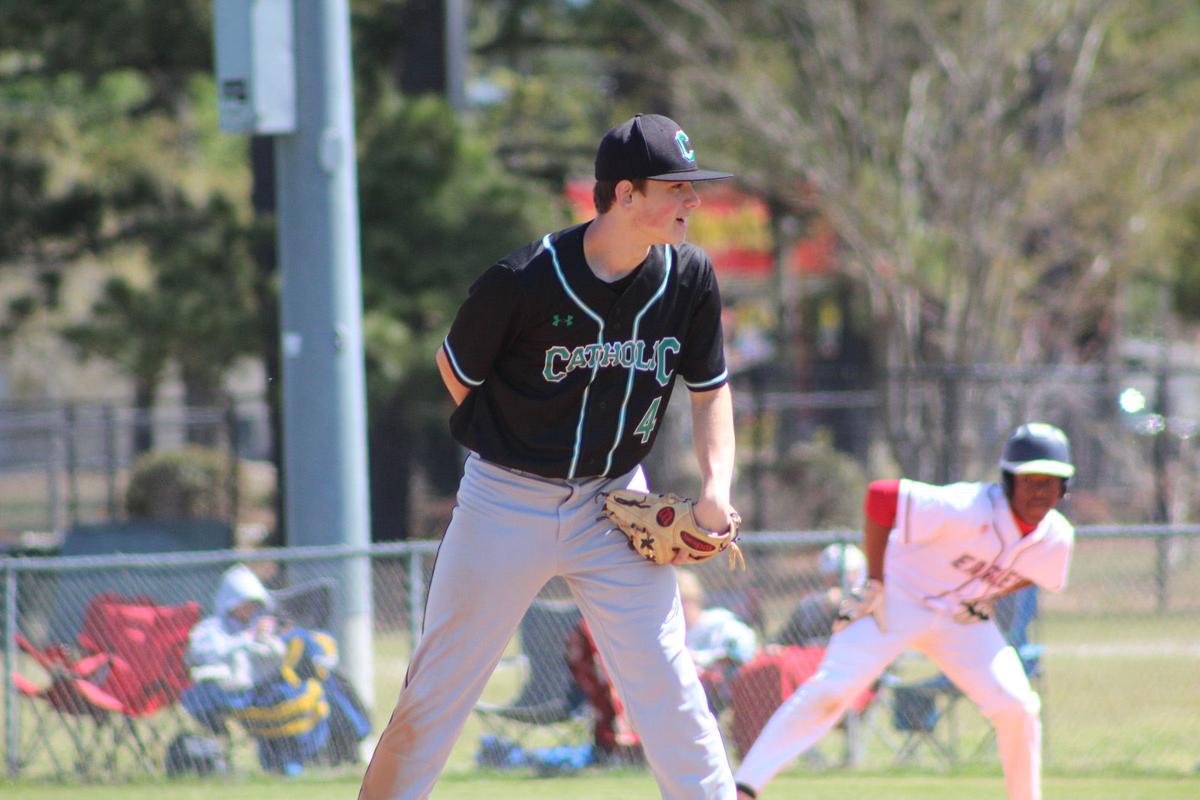 Charleston Catholic’s Jacob Hufford was the only freshman on the 2018 Class A baseball All-State first team. 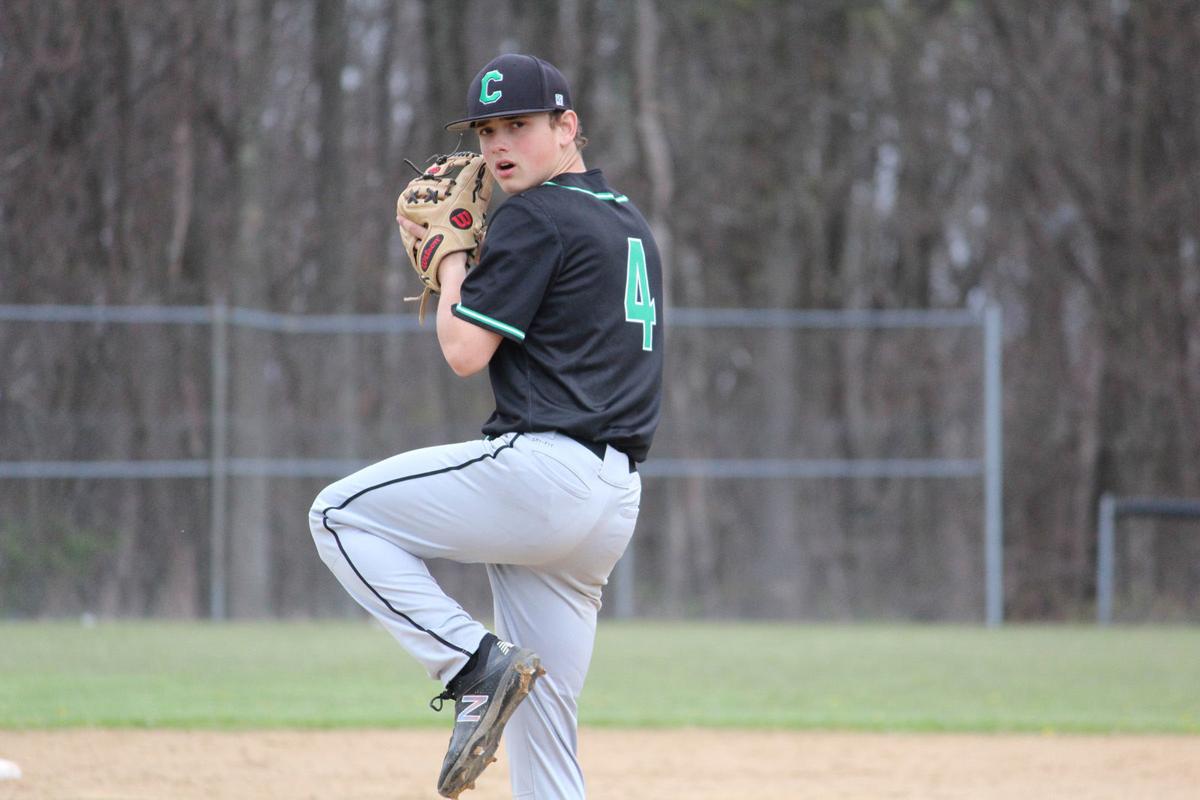 Then a freshman, Jacob Hufford set a school record for Charleston Catholic with a 0.96 ERA in 2018.

Moorfield’s Thomas Williams slides safely into third as Charleston Catholic’s Jacob Hufford waits for the throw during a 2018 Class A state tournament game at Appalachian Power Park. Hufford hasn’t played in a game for the Irish since then, missing 2019 with an injury and 2020 due to the coronavirus shutdown.

Charleston Catholic’s Jacob Hufford sits next to the dugout with a brace on his leg during the 2019 season. Hufford, a first-team all-stater as a freshman in 2018, was recovering from a torn ACL and kept the team's pitching charts that season.

Charleston Catholic’s Jacob Hufford was the only freshman on the 2018 Class A baseball All-State first team.

Then a freshman, Jacob Hufford set a school record for Charleston Catholic with a 0.96 ERA in 2018.

When word came down a month ago that spring sports were canceled in West Virginia due to the coronavirus pandemic, it dealt disappointment to dozens of high school baseball players in the Kanawha Valley.

That disappointment was doubled, however, for Charleston Catholic’s Jacob Hufford. He’s now lost not only one whole season, but two.

Hufford, a first-team Class A All-State selection as a mere freshman in 2018, missed his entire sophomore season after suffering a torn ACL playing basketball. He had doggedly rehabbed the injury, returned to the baseball field for preseason practice and was “looking excellent,’’ according to Irish coach Bill Mehle.

Practices were first halted in mid-March, and a month later the hammer finally fell on every spring sports team in the state due to COVID-19, and Hufford was caught looking at another lost season.

How long has it been since Hufford has suited up and played for the Irish? Well, at the moment, it’s been 721 days. So even if Catholic schedules a game on March 17, 2021 — the first possible date for games next season — Hufford will have gone 1,020 days since playing for the Irish in the 2018 state tournament at Appalachian Power Park.

“It’s definitely been hard to miss two years in a row,’’ Hufford said. “Even talking about baseball seems kind of weird for me. I haven’t played in so long, and I miss the competition.’’

When preseason workouts began on March 2, the 17-year-old Hufford seemed primed to take up where he left off in 2018. That season, as a versatile utility man, he led the team in hitting (.458) and stolen bases (16), also scoring 35 runs and driving in 30. He struck out just six times in 143 plate appearances.

He was also one of the team’s top pitchers in his freshman season, going 7-1 with a program-record 0.96 earned run average and 44 strikeouts against just nine walks in 51 innings.

“He’d hit the weight room hard this fall and winter,’’ Mehle said, “and was in great shape with both his strength and conditioning. He looked really good the first couple weeks of practices we had.’’

When Gov. Jim Justice decided on April 21 to keep schools closed the remainder of the scholastic year, the news hit the Irish about as hard as any team. They were set to return 11 starters — all 10 from the previous season, in which they fell to Moorefield in the Class A state finals — along with a now-healthy Hufford.

Rather than fret at another bout of his own misfortune, Hufford instead worried about his baseball teammates when the season was called off, most notably the group of Irish multi-sport athletes who had already qualified for the state basketball tournament.

“I remember the last practice we had,’’ Hufford said. “It was the saddest practice I’ve ever been to. Some of our seniors who played basketball just found out their season got canceled. Then that last [baseball] practice we had, I remember people were crying, people were giving each other hugs. We said we’ve got to go out and go our hardest because who knows what the future holds?

“I’ve never experienced anything like that and I felt so bad, especially for the ones who played basketball.’’

Now facing a two-year absence from high school baseball, Hufford said he never gave in to the temptation to feel sorry for himself.

“It was kind of out of our control,’’ he said of the season being delayed, then erased. “I told a bunch of friends that there’s more, bigger things to worry about than our baseball season being canceled. I didn’t want to sound selfish, and there were so many more important things than baseball season.

“We still had school to focus on and in the first few weeks of quarantine, we still had the idea that we were going to go back and play baseball. We’ve still got to go out and do all the things we need to do. There was no time to feel sorry for yourself. You’ve got to stay busy, work out every day, stay active and keep a positive mindset. Be productive and make yourself better every day.’’

Mehle said he noticed Hufford’s maturity taking over during the tough times, and pointed to the fact Hufford played alongside his older brother John, a senior, during Jacob’s freshman season in 2018. The lessons Jacob learned through his disappointments should in turn make him a solid senior leader, according to Mehle.

“John was a great mentor to him,’’ Mehle said. “They had the great fortune to play together that year in 2018, and John was a really strong presence in his life.

“Obviously, he’s been very disappointed with his injury and the loss of this season, but I had him in my theology class this year and I can see how much he’s grown and developed physically and mentally and the strength of his character is coming through in how he handles himself in class, and the depth of his responses in his written work and how he responds to his peers. He’s matured a lot, and has a big smile and a big heart.’’

Jacob Hufford hasn’t been completely sidelined from baseball the past two years. He got in some games in the summer of 2018 with the Huntington Hounds and had a few fall ball pitching appearances in 2018 and 2019, both before and after his knee injury. He also attended most Charleston Catholic games as a sophomore in 2019 while rehabbing and kept the pitching chart for the Irish.

Having grown to 5-foot-101/2 and 170 pounds, he hopes to get in some games this summer as a member of the Appalachian Aces, a 17-and-under travel team based in Morgantown and coached by Josh Kuykendall, a former pitcher at West Virginia State and Potomac State.

The Aces, who haven’t held a formal practice yet, have already canceled their season-opening games from June 12-14 at Shawnee due to COVID-19, and now look to begin June 18-21 in Louisville, Kentucky.

During the interim, Hufford has begun the process of marketing himself to college baseball recruiters. Working with producer Butch Mounts, he put together a four-minute skills video of himself and placed it on his own YouTube channel to drum up interest.

“It’s for me to try and get my name out there,’’ Hufford said. “Since it’s been two years since I actually played in a [high school] game, it’s hard for colleges to see what I can do, and that’s why I made the video. They can see me play, see me throw, see me hit. If I get feedback, they can come and see me play in summer tournaments.’’