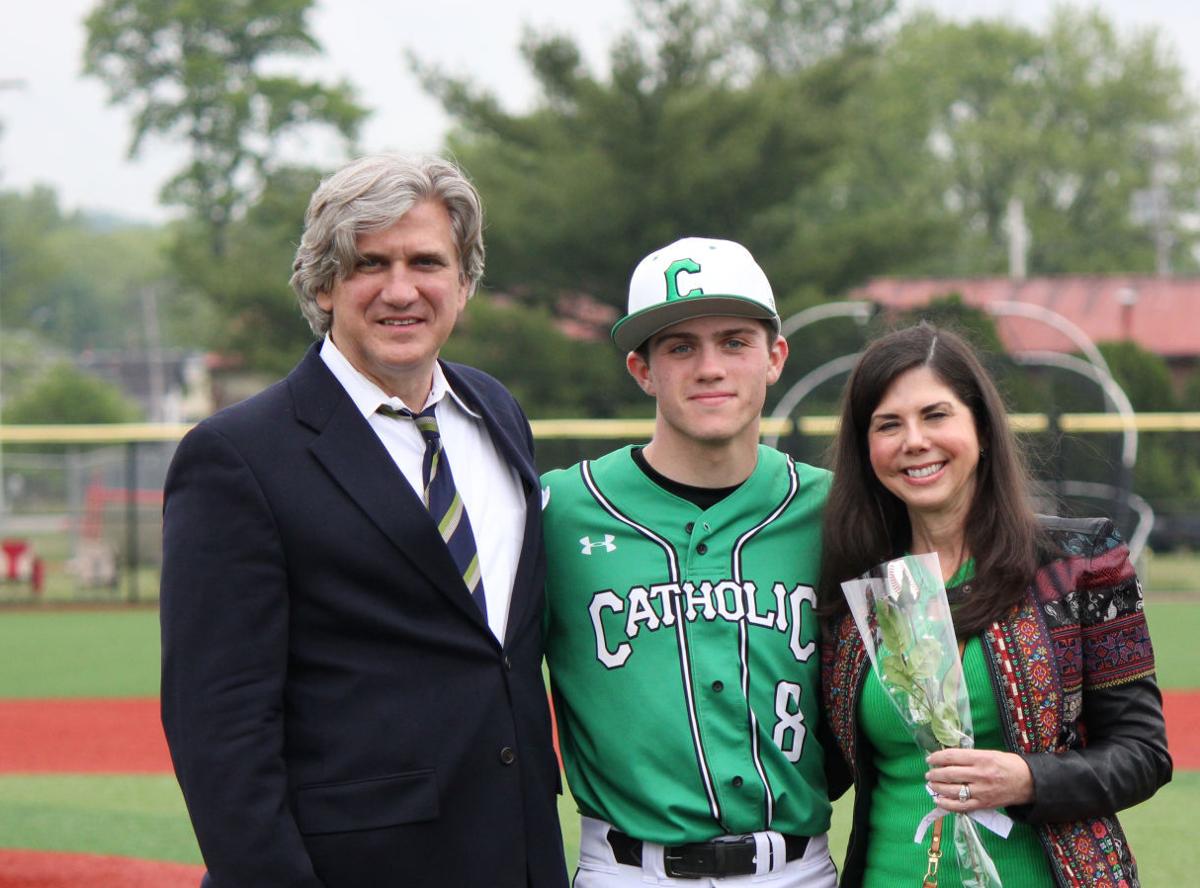 Charleston Catholic center fielder Liam McGinley (center) poses for a Senior Night photo with his father Sean (left) and his mother Ana (right). Sean McGinley was killed in an automobile accident on June 3 while on his way to watch his son play in a sectional tournament game. 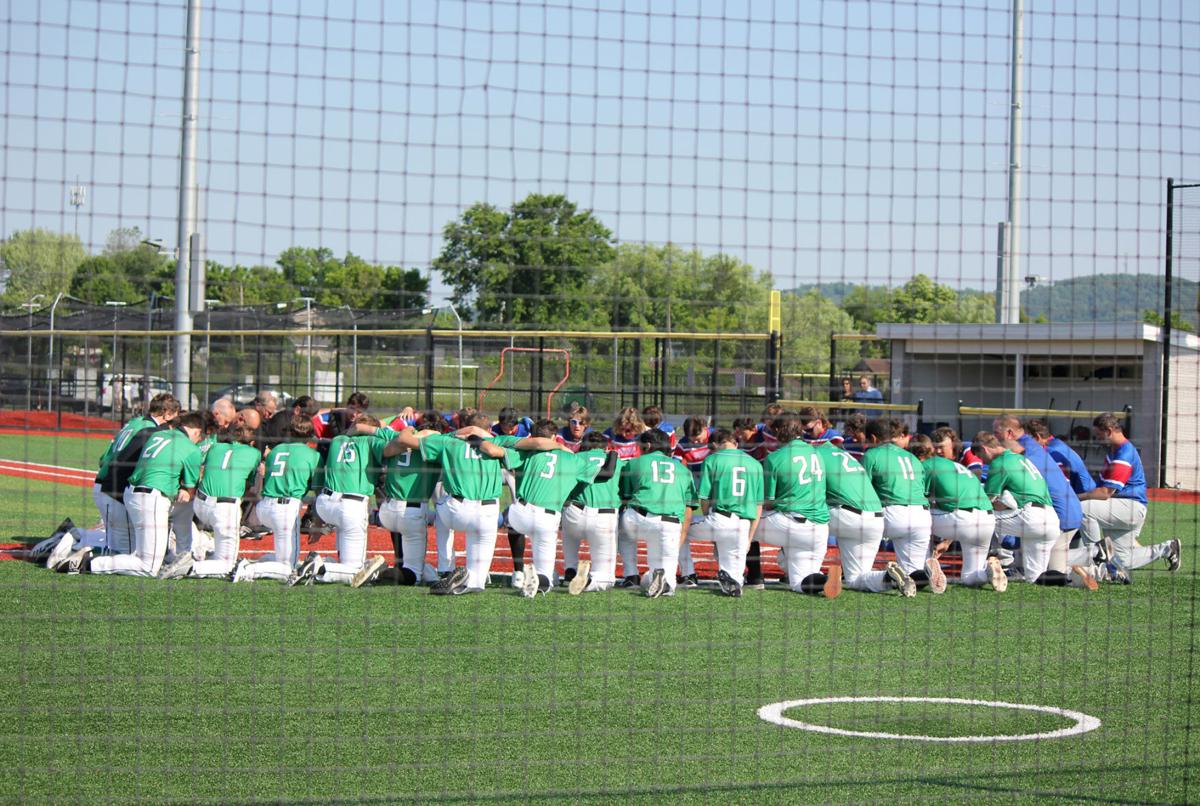 Players from Charleston Catholic and Midland Trail form a prayer circle around home plate before their regional tournament game on June 4. The teams came together to pray and remember Sean McGinley, who died in a car accident the day before. Sean McGinley is the father of Irish center fielder Liam McGinley.

Charleston Catholic center fielder Liam McGinley (center) poses for a Senior Night photo with his father Sean (left) and his mother Ana (right). Sean McGinley was killed in an automobile accident on June 3 while on his way to watch his son play in a sectional tournament game.

Players from Charleston Catholic and Midland Trail form a prayer circle around home plate before their regional tournament game on June 4. The teams came together to pray and remember Sean McGinley, who died in a car accident the day before. Sean McGinley is the father of Irish center fielder Liam McGinley.

On June 4, Charleston Catholic’s Liam McGinley helped the Irish clinch a Class A baseball sectional title and earn a trip to the regional tournament.

The senior center fielder hit a two-run single in the bottom of the sixth and made the game-ending catch in the top of seventh as Catholic downed Midland Trail 11-4 to clinch the Class A Region 3 Section 2 tournament.

Most people would have been jubilant after such an effort. For McGinley, though, it was the most difficult time of his life.

That June 3 game was suspended until the next day due to inclement weather, and McGinley shortly thereafter found out about his father’s passing. His mother broke the news to him when he got home from the suspended game.

McGinley reflected on his father and the memories he has of him.

“My dad was basically the perfect example of a father I could think of,” McGinley said. “He really was the nicest man I knew and I genuinely mean that. I can’t think of a time he was ever rude to anyone. The main thing I take from my father is showing respect and kindness to others.”

McGinley was devastated by his father’s death, but that didn’t keep him off the field. Remarkably, he bounced back and played in that June 4 sectional clincher. Not only did he play, he played well.

“I just felt like my dad was looking over me,” McGinley said. “It made me realize that I think he’s going to be looking out for me from above.”

McGinley said his decision to continue playing was the right thing to do.

“I felt like my dad would have wanted me to play,” he said. “He wouldn’t want me to dwell on him passing and not help my team get past a tough opponent in Midland Trail. He was driving to the game when he got into the accident and I felt like it would not be right if I didn’t finish the job for him.”

Catholic coach Bill Mehle was in constant communication with McGinley in his time of mourning and said he was both surprised and amazed at the player’s attitude.

“Early the next morning [after Sean McGinley’s passing], I texted Liam with my condolences,” Mehle said. “I was heartbroken at the news myself. He texted me right back and said he really appreciated that.

Mehle invited McGinley and his five other senior teammates, along with the rest of the coaching staff, to the dugout early before batting practice started that Friday for a time of reflection and prayer.

“Liam cried, the other guys cried [and] shared some stories,” Mehle said. “I learned a lot about Liam’s father and Liam over the course of this past week.”

The prayers didn’t stop there. Before the resumption of the suspended game, players from Midland Trail and Catholic created a prayer circle around home plate and came together to remember Sean McGinley. Liam McGinley said he’s thankful for all the support he’s gotten from the community.

“My teammates have been great,” he said. “They’ve all been super-supportive of me the past couple of weeks and really all year long. For Midland Trail, I have the utmost respect for them. They were super-kind to me and supportive of my whole situation during that game.”

“I was just utterly amazed at Liam’s ability to handle that situation the way he did, which I think is reflective of the kind of young man I’ve come to know him to be,” Mehle said.

In sports, it’s common to memorialize the deceased with things like uniform patches and helmet stickers. The idea to put a patch of McGinley’s uniform number (8) on everyone’s jersey was floated around by parents.

However, McGinley selflessly rejected the idea, saying he didn’t want to make things about himself.

Instead, he and his teammates came up with a different way to honor Sean McGinley.

“I have some writing on my cleats,” McGinley said. “I wrote a few things like ‘R.I.P. Dad I love you’ on each side of my cleats. A few of my teammates have them as well.”

Liam McGinley had stopped playing baseball after eighth grade and played soccer his first three years of high school. He didn’t plan to play baseball his senior year, but an injury to another player prompted him to suit up on the diamond for his senior year.

McGinley said his father, who was a lifelong Pittsburgh Pirates fan, was also part of the reason he returned to baseball.

“One of my friends, J.W. Armstrong, called me up and said that one of the outfielders was hurt [and] he’d be out the whole year,” McGinley said. “When J.W. called me and told me that, I told my dad. My dad always encouraged me to come back and play. That was a huge part of [coming back]. His favorite thing in life was baseball.”

Baseball is not easy to pick back up after being out of the game for so long, and it took McGinley some time to get back in the swing of things, but he said overall the experience has been positive.

“It took a little bit of adjusting at first,” he said. “My arm was not as strong at the beginning. Lately I think I’ve gotten back into the full swing of things. I’ve really enjoyed my time playing.”

“It’s tough to come out for high school baseball as a senior for the first time, but he did it,” Mehle said. “He was very faithful from the second day of practice, which was his first day. He gave it 110% every day and he eventually earned the starting position. He’s been key in the outfield.”

After a couple trying weeks, McGinley faces another challenge this coming week as the Irish are set to take on Man in the Class A state tournament semifinals Friday night at Appalachian Power Park. McGinley said he’s using his father’s passing as inspiration to play even harder.

“Obviously I wanted to win before, but now I have a ton of extra motivation pushing me and I think it’s helping the team as well,” he said. “We are all super-motivated to bring home a championship. I want to do it for my dad.”

McGinley has exhibited great poise and composure when presented with tough circumstances, and he offered some advice to those who might be going through a similar situation.

“Use the community you have behind you,” he said. “It helps a lot. It doesn’t heal everything but it sure helps a lot.”