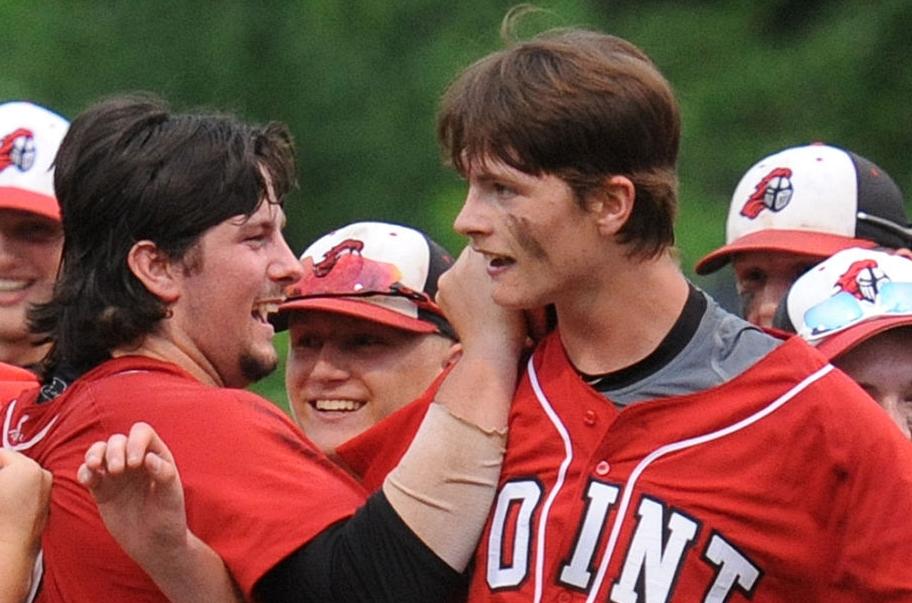 Point Pleasant pitcher Kyelar Morrow (9) is congratulated by his teammates after a 1-0 sectional victory at Sissonville on Tuesday night. 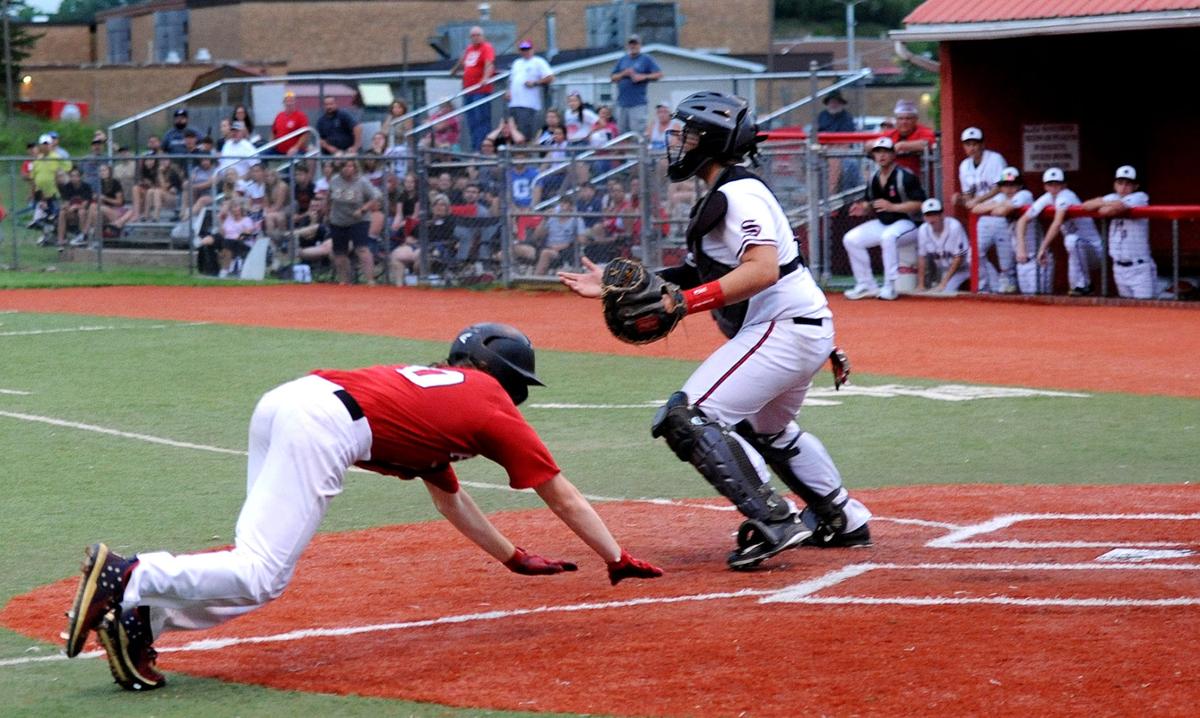 Point Pleasant’s Riley Oliver dives for home plate ahead of the throw to Sissonville catcher Hunter Montgomery on a hit in the seventh inning, scoring the only run of the game Tuesday night.

Point Pleasant pitcher Kyelar Morrow (9) is congratulated by his teammates after a 1-0 sectional victory at Sissonville on Tuesday night.

Point Pleasant’s Riley Oliver dives for home plate ahead of the throw to Sissonville catcher Hunter Montgomery on a hit in the seventh inning, scoring the only run of the game Tuesday night.

In what amounted to a carbon copy of the previous day’s game, it was Point Pleasant’s time to turn the page.

Kyelar Morrow threw a stellar one-hitter with eight strikeouts and Evan Roach delivered an RBI single in the top of the seventh inning Tuesday, giving the Black Knights a 1-0 victory at Sissonville and the Class AA Region 4 Section 1 championship.

Morrow, in outdueling Sissonville’s Colten Carpenter, faced just three batters over the minimum, issuing no walks and allowing just one Indian base runner to get as far as second. The win sends the Black Knights (20-8) into a best-of-three Region 4 series against Logan, with the opening game at 6 p.m. Monday at Logan.

“Fortunately, it worked out for us,” said Point Pleasant coach Andrew Blain. “Man, what a game.”

On Monday, Sissonville edged Point 1-0 as Collin Cottrell threw a three-hit shutout and the Indians’ No. 9 hitter, Tristen Portz, drilled an RBI single up the middle in the fifth for the game’s lone run. A day later, the Black Knights’ No. 9 hitter, Roach, was in the spotlight.

Carpenter carried a no-hitter into the seventh inning before Tanner Mitchell led off with a clean single. Two fielder’s choices later there were two outs, but an infield throwing error on the second force play allowed Riley Oliver to reach second. Roach then knocked a single up the middle to send Oliver scurrying home.

Morrow induced the Indians into three straight ground outs in the bottom of the seventh to end the game as storm clouds began to gather on the horizon and rain started to sprinkle. It was the third time Morrow had beaten Sissonville this season, with the other complete-game wins coming by scores of 7-0 and 12-2.

“The second time we played them,” Morrow said, “I figured out they could hit breaking balls, but they were more of a fastball-hitting team. So I just tried to use that in my approach.

“I just tried to go out there and throw my game. I knew if I pitched them backwards — started with breaking balls and fed in some fastballs at the end of the ABs, then it would throw them off because I’d thrown against them twice already this season. That was my approach the first two times, and it worked.”

His counterpart, Carpenter, had to work out of a couple of jams earlier in the game despite not allowing any hits until the seventh. Point had bases loaded and none out in the second, but a called third strike and a 6-4-3 double play ended that threat. The next inning, Wyatt Wilson drew a walk, stole second and moved to third on a grounder, but Carpenter got another K to keep it scoreless.

The son of Sissonville coach Chad Carpenter, Colten Carpenter ended up with a two-hitter and allowed the one unearned run with three strikeouts and two walks.

“It was a carbon copy. We just didn’t get the timely hit like we did yesterday. And their guy [Morrow] threw really well. That guy’s beat us three times this year, so hats off to him. They have a really good staff and really good coaches. We just didn’t scratch across that run when we had the opportunity.”

Sissonville’s only runner to touch second was Dylan Griffith, who reached on an infield error in the fourth and swiped second, but was stranded there by Morrow on a K and a ground ball. Levi Tinsley blooped a single behind third base in the first inning for the Indians’ only hit.

Blain pointed to a similar one-run win against Nitro during the regular season as a testament to his team’s mental toughness after getting shut out for 13 straight innings by Indian pitching.

“Things didn’t go our way, but we scratched out a hard-fought win there,” Blain said, “and I’ll say the same things I said then. They are resilient, they are relentless. They do a really good job of not getting down, and that’s what is the difference maker.

“They truly believe what we tell them about having a good approach every at-bat. It’s a new at-bat, so take care of the process and the results will take care of themselves. That’s what you have to do in a game like that. You can’t let bad calls get in your mind, can’t let the fact you hit a dinker and the pitcher got you out somehow the last time. You’ve got to live to fight another day.”