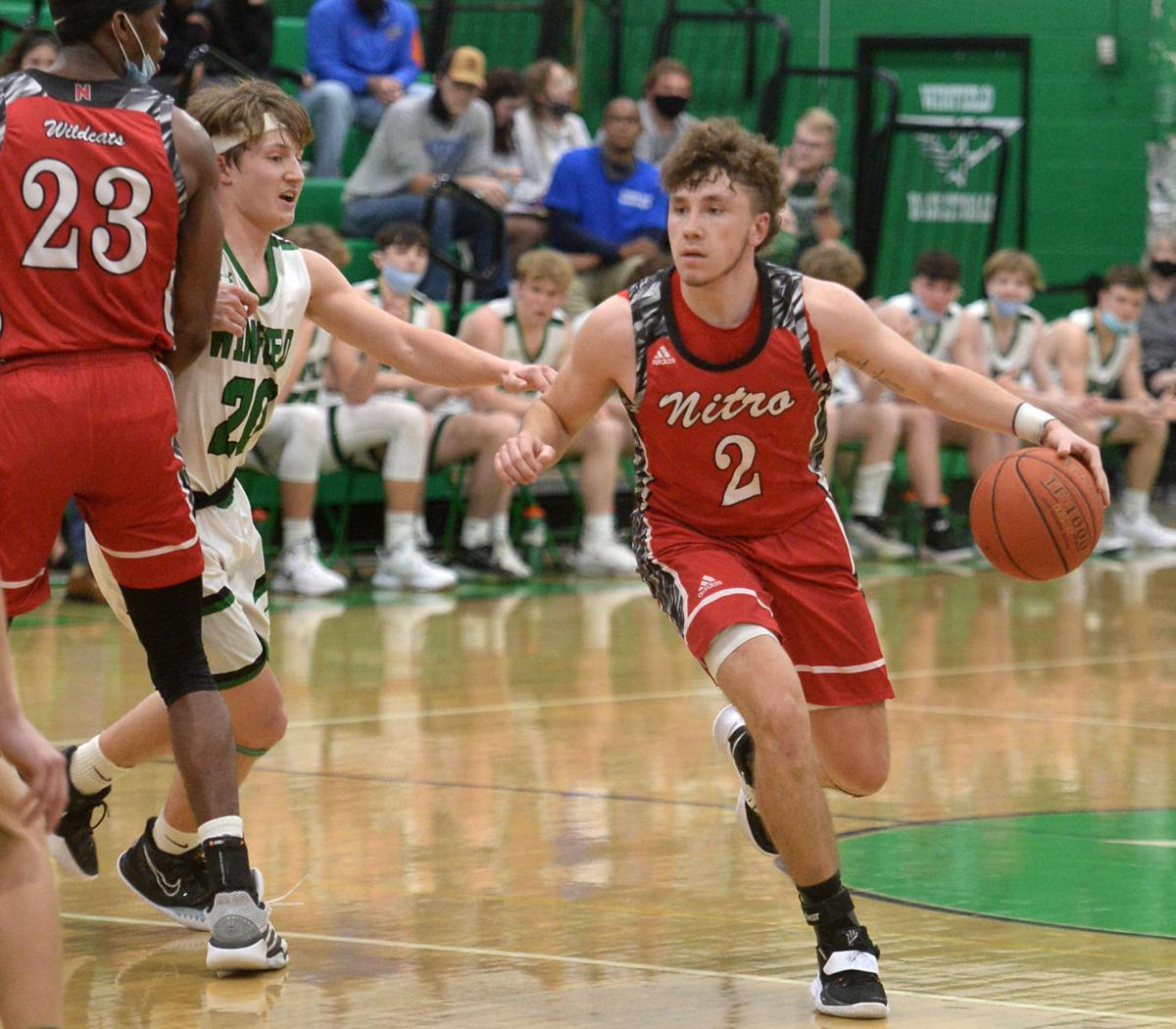 Nitro’s Kolton Painter (right) uses a screen from Joseph Udoh to get some room to operate around Winfield defender Carson Crouch. 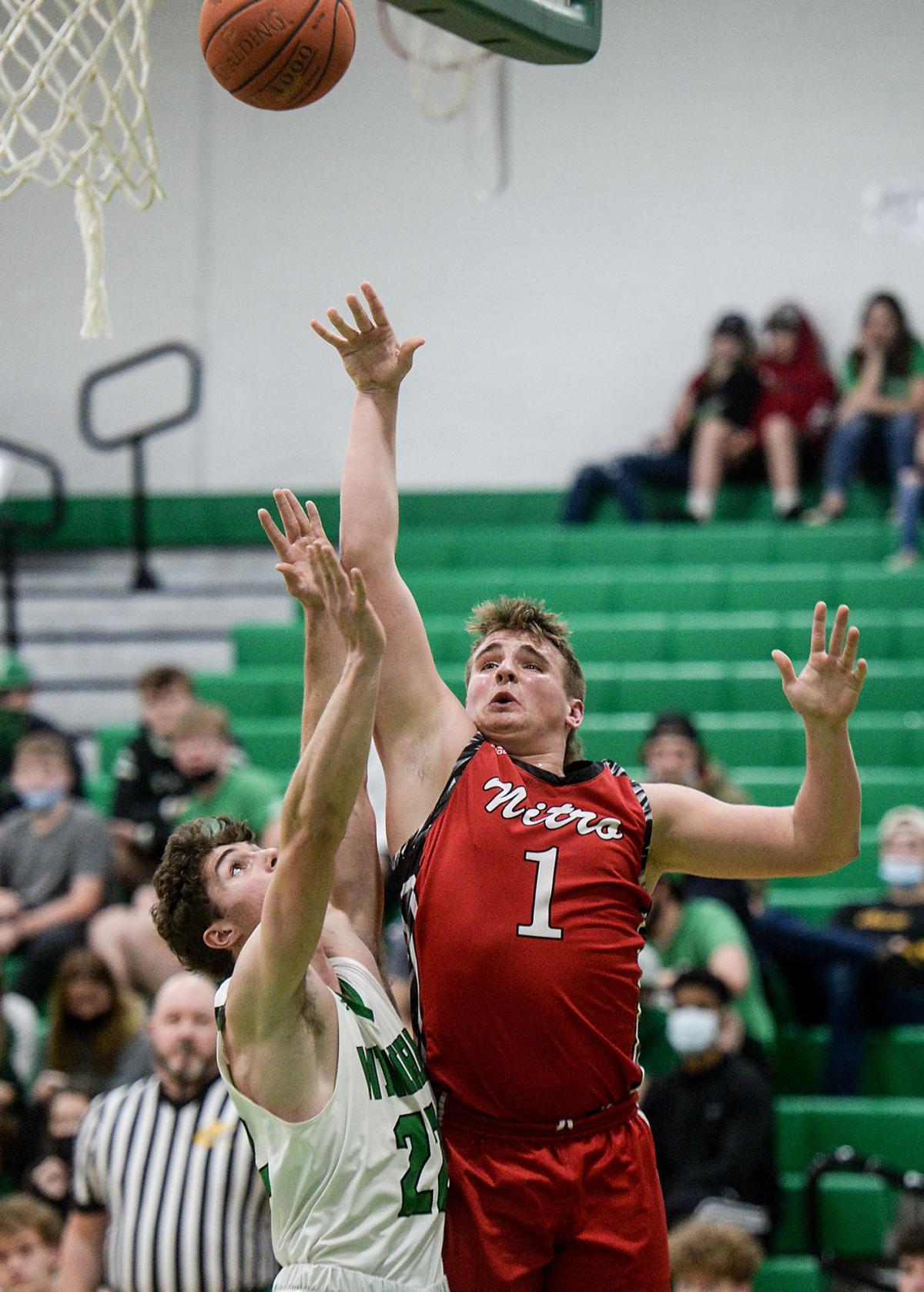 Nitro’s Kolton Painter (right) uses a screen from Joseph Udoh to get some room to operate around Winfield defender Carson Crouch.

If Nitro is indeed to be considered a contender in the revamped boys basketball Class AAA, it can’t just win the games where it flies up and down the court, hoisting 3-pointers and throwing down slam dunks — the fun, entertaining games.

It also has to win the tough, dirty, gritty, grinding games — like the one the Wildcats played Wednesday night at Winfield.

Despite shooting just 38% and committing an uncharacteristic 15 turnovers, Nitro was able to hang on for a 45-43 victory over the Generals and their trademark denying defense. The Wildcats, ranked No. 4 in AAA, improved to 8-2 overall and maintained a tie with Logan atop the Cardinal Conference at 5-1 in league games.

The rebuilt Wildcats came into the season with expectations of battling the recognized state powers such as Robert C. Byrd, Fairmont Senior and Shady Spring in the new-look AAA of the state’s now four-class system in basketball. Nitro returned a pair of top-notch scorers in Kolton Painter and Trevor Lowe and welcomed the addition of Sissonville transfers Joseph Udoh, a 6-foot-9 center, and guard Bryce Myers.

Early on this season, it was showtime when the Wildcats came to play, as they rocketed out to a 4-0 start, including a 12-point win over Class AA contender Poca. But since then, they’ve seen the other side of the coin, losing to AAAA Woodrow Wilson with a fourth-quarter swoon and suffering a road loss to Logan when some internal issues came to the fore. That caused Austin Lowe and his players to hold a soul-searching session in the locker room for about an hour following that game.

So Wednesday’s obstacle course at Winfield couldn’t have been any more difficult to navigate, though the Generals and coach Chris Stephens tried their best with an in-your-face defense that entered the game sporting a 5-0 record when holding opponents to 50 points or fewer.

“Kudos to Coach Stephens,’’ Austin Lowe said. “If there’s one thing he does, it’s to get those guys to play hard. They play as hard as anybody we play. I challenged our kids at the end of the first quarter because I thought Winfield played harder than us, and they responded.’’

After the Generals shot out to a 14-6 lead, Nitro slowly took control in a game that had little offensive flow. The Wildcats led 27-20 at halftime but spent the final quarter fending off a late challenge from Winfield.

Despite scoring just one basket in the first 7 minutes, 10 seconds of the fourth quarter, the Generals found themselves within a single point at 43-42 on a Brett Morris 3-pointer with 4.5 seconds remaining. Painter was fouled at the 3.5-second mark and made both free throws for a three-point Wildcats lead, and Nitro opted to immediately foul instead of giving Winfield a chance to tie it with another 3.

The strategy nearly backfired. Morris made the front end of his 1-and-1 with 2.1 seconds to go to make it 45-43, then intentionally missed the second off the front of the rim. The ball caromed right to Generals teammate Joey Gress, who put up a follow shot at the buzzer, but it was off the mark and Nitro cleared another hurdle.

Austin Lowe is finding that life near the top of the rankings isn’t always glamorous. The Wildcats recently lost Trey Hall, a dependable starting guard and 3-point shooter, to a high-ankle sprain and he’s already missed three games and is likely to miss more. Then top reserve Josh Barton decided to focus on track, a spring sport season that’s getting ready to start.

“You lose a starter and you lose your first guy off the bench to another sport,’’ Austin Lowe said, “and it’s next man up. We’ve always preached that, and you know you’ve got to be ready. I know we’ve got four, five guys that take most of the minutes but I can’t say enough about how hard they play and how they’re buying in.

“We did have some hiccups at Logan and everybody knows it, but the way they’re responding to what happened at Logan is unbelievable for a bunch of 17-, 18-year-old kids. They faced major adversity a week ago and they faced adversity here [at Winfield] tonight. I really believe in these guys with what they went through the last two weeks and to respond the way they’ve responded, I wouldn’t be afraid to put them against anybody.’’

Udoh turned in a double-double for Nitro with 16 points and 16 rebounds and Painter added 10 points and eight rebounds. For Winfield (7-5), Morris had 13 points and Ethan Kincaid eight points and a team-high six rebounds.

The Generals, who lost their top three scorers from last season, shot only 35% with 14 turnovers Wednesday and went through two long scoring lulls, one in each half, that hindered their comeback chances.

“We struggled at times to put the ball in the hole,’’ Stephens said. “That’s hard to beat anybody that way. As I’ve told our kids, if we didn’t play well on defense, we’ll get whipped tonight but we had enough to stay in it and give ourselves a chance there at the end, and that’s all you can ask in a game like that when you don’t play well offensively.

“The good thing is, I think we have a chance to contend with anybody in triple-A, as do they [Nitro]. I think they have enough because they have scorers, they have shooters and they have the big [guy] inside.’’