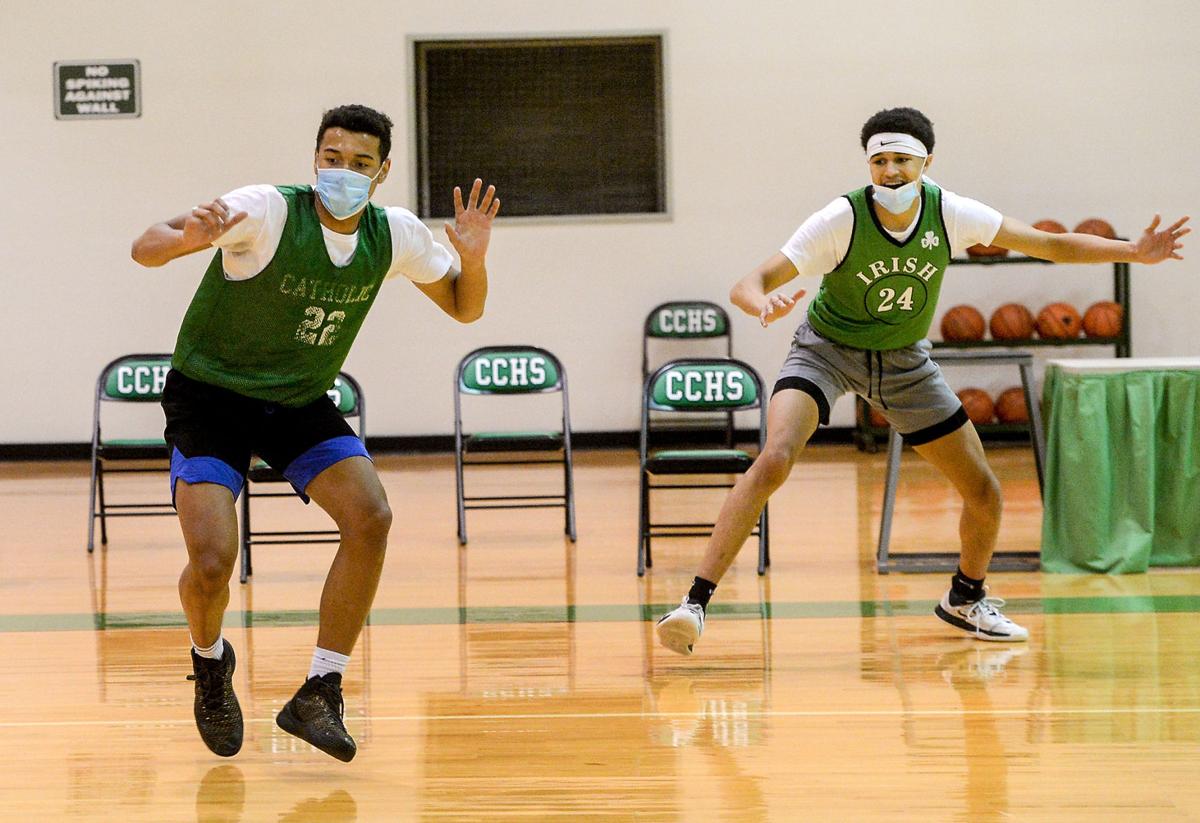 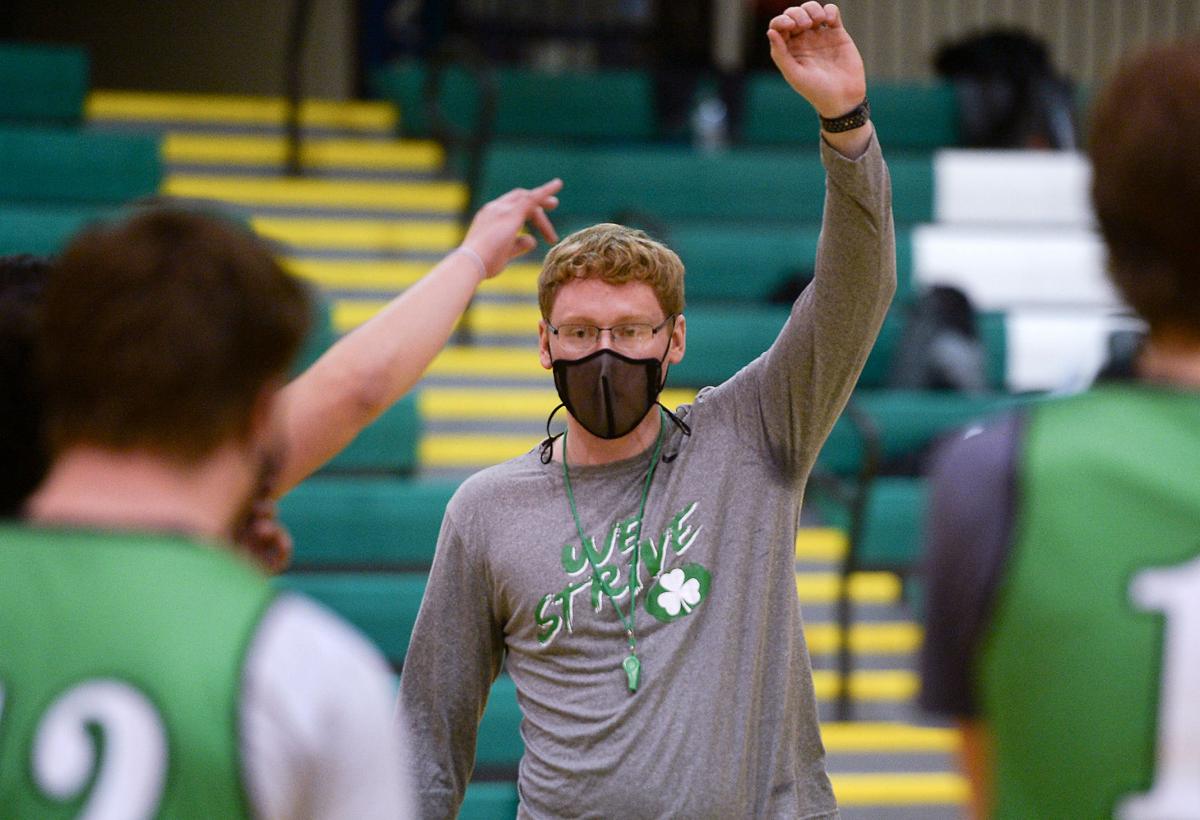 Charleston Catholic boys basketball coach Hunter Moles guides his team through practice. The Irish have scheduled only 15 games in the regular season, though they could have scheduled 18.

Charleston Catholic boys basketball coach Hunter Moles guides his team through practice. The Irish have scheduled only 15 games in the regular season, though they could have scheduled 18.

More than a decade ago, Charleston Catholic featured the “Bo and Joe Show,’’ riding the play of All-Staters Bo King and Joe Sassler toward back-to-back Class A state championships in 2006-07.

The Irish hope to recapture some of that magic this season by hitching their hopes to everything from “A to Z.’’ That would be another pair of All-State athletes, seniors Aiden Satterfield and Zion Suddeth.

Satterfield and Suddeth are the two most important cogs of the returning talent for Catholic, which lost eight seniors from the squad that went 19-5 last season and earned a spot in the Class A state tournament as the No. 2 seed, only to have the tournament canceled months later due to COVID-19. Now those two are back for more, and are eager to make up for time lost to the pandemic.

One look at the senior duo and you realize that they provide the Irish with, well, everything from A to Z.

n The 6-foot-7 Satterfield, a first-team All-State selection, was instant offense for Catholic last season, topping the team in scoring (19.1 points per game), knocking down 31 3-pointers and throwing down 23 dunks. He also averaged 4.9 rebounds and 2.1 steals and shot 51% from the floor and 74% at the foul line. At his height, and with his ball-handing skills, Satterfield can get the shot he wants most times.

n Suddeth, a 6-2 guard and second-team All-State pick, is the program’s longstanding defensive whiz. Twice he’s been part of the Gazette-Mail’s all-defensive team and as a sophomore, was selected as the Kanawha Valley’s defensive player of the year. He also chipped in a 14.3 scoring average last season, canned 26 3-pointers and helps direct traffic on offense.

“Having two guys like that makes my job a lot easier,’’ said Hunter Moles, the second-year coach of the Irish. “You can’t complain with the skill set of those two guys. They’re great on the court, but my respect for them really comes off the court. I’ve just grown so close to them ... and I’m so thankful to know them as people because of them and their families. They’re great people, they really are, and that’s what we’re trying to build here, a family atmosphere. We want it to be bigger than basketball.’’

The Irish finally returned to practice Wednesday at the school’s athletic facility after their program, like most around West Virginia, was shut down for months due to COVID. It comes almost a year after they had captured the Region 4 title last March, locking up a berth in the state tournament and ending a four-year drought. Then, less than 24 hours later, the floor dropped out when basketball season was shut down and never restarted.

“I think it’s crazy because I can still remember the moment,’’ Suddeth said of the regional victory. “It was probably one of the happiest moments of my life as a basketball player, to be able to cut down the nets and think that you’re going to be able to play at the Civic Center, and the whole school’s going to go down there.

“Then, everyone had time to just sit and think because everyone had time on their hands during the first quarantine. It hurt a little bit ... it hurt a lot, considering the team we had. But you’ve just got to keep moving from it, and there’s lot of things you can try to do on your own to keep moving toward the next season. As soon as we realized we weren’t going to play, the thought was, ‘Who are the guys we’re going to have next year,’ so that we can make sure we get back to the point of cutting down the nets and getting back to the Civic Center.’’

Satterfield said the pain of missing out on last year’s state tournament still haunts him (“I don’t know if I’ll ever get over that’’), but said he learned a good deal about himself and the people close to him.

“It teaches you to just keep working,’’ Satterfield said. “There’s so many times when the season gets postponed or whatever, and you can just stop and quit. But luckily, I’ve got really good people around me — a great coach, great family — and they just keep telling me I’ve got to stay in the gym, stay in the gym. That’s really what it taught me.’’

Satterfield put the idle time to good use, gaining 15 to 18 pounds and growing nearly 2 inches, leaving him at 6-7 and 186 pounds.

“I lifted a lot,’’ he said. “I’m very blessed that I had access to a gym the past few months. A lot of kids didn’t. I’m a lot better now all around, a lot better handling the ball, working on defense a lot more. [Improving] defense will be the next step to becoming a much better player.’’

Suddeth also thinks he’s improved during COVID down time, getting stronger in his upper body and legs and working on his shooting and defensive skills. He likewise credits the support of his family, who helped him realize he needs to become a role model for the team’s younger players.

“Become more of a vocal leader, which is what coach says we have to do a lot of this year,’’ Suddeth said of himself and Satterfield, “because we’re the older guys now. Try to teach the freshmen that it’s go time. We’ve got to go, but enjoy the moment and have as much fun as we can. At each and every practice, go as hard as we can because it’s the only thing we can control.

“I think the guys have bought into that. You have to make some sacrifices to be able to play and this means not going out on weekends or weekdays and staying more as a team.’’

Moles believes that Suddeth and Satterfield will step into their leadership roles naturally.

“I really appreciate having them,’’ Moles said, “and I’m looking forward to seeing their leadership this year. We have a really good freshman class coming in and I think that, in the next two, three, four years, you’ll see them get better and it’ll be because of Aiden and Zion and the other seniors.’’

It’s interesting that Suddeth and Satterfield spent many days in the off-season going at it one on one, because they’ve already decided to attend rival Mountain East Conference schools in the Northern Panhandle. Satterfield has signed with West Liberty and Suddeth has committed to Wheeling.

“Aiden and I play countless one on one,’’ Suddeth said, “and I’ll tell you, it helps when you go against someone who’s 6-7 because you lose a lot. No matter how great the defense you play against him, sometimes it’s not enough. And I think defense is one of the strongest skill sets that I have.’’

Satterfield realizes it will be “different’’ going up against Suddeth at the next level after they bonded so many years ago as teammates.

“It will be wild,’’ Satterfield said. “I’ve known him for 10 years, and we’ve been playing with each other and against each other since we were 10 years old. I know our parents will be proud, and they’ll probably end up crying when they see us play each other. Because growing up with the kids we played with, a lot of them went different paths, and now we’ll be playing college basketball against each other. And that’s a real blessing.’’