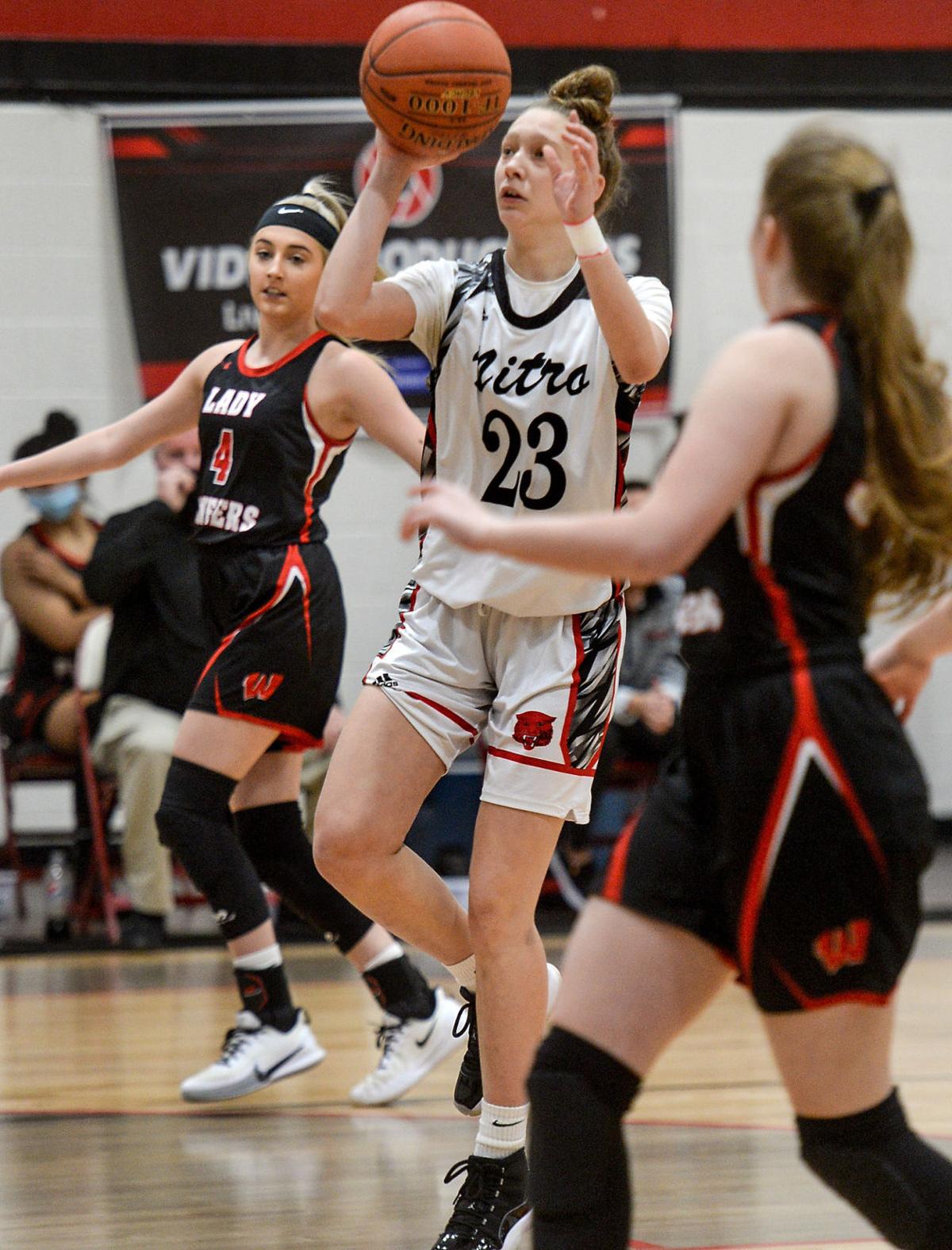 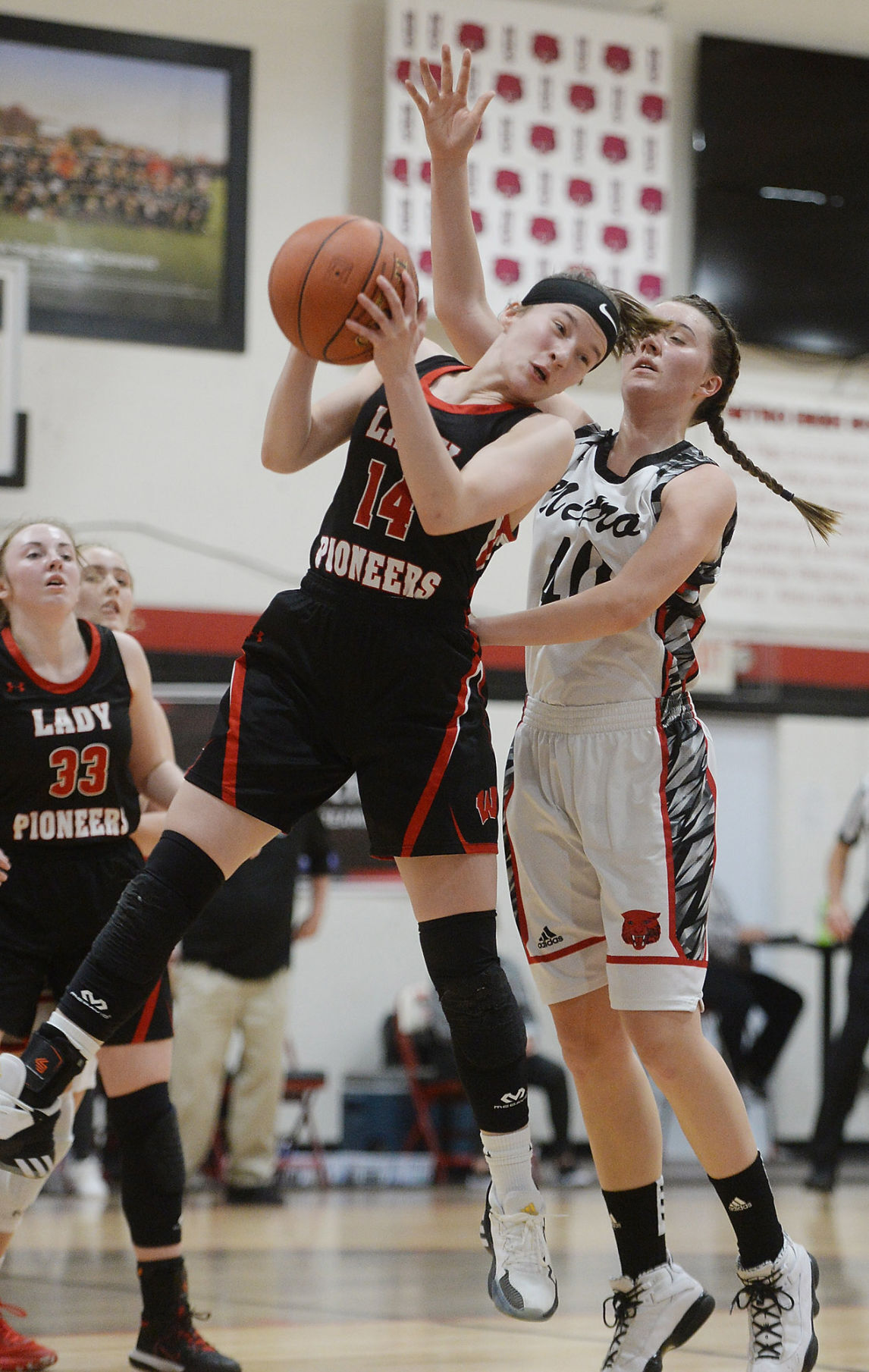 The girls basketball programs at Nitro and Wayne have a habit of running into each other when the stakes are high. Most times, there isn’t much separating the two.

Each of the last four seasons, one team has seen its season come to an end at the hands of the other. Last year, it was the Wildcats finally breaking through in the sectionals, beating the Pioneers 68-66 behind a 44-point explosion from Baylee Goins, the state’s leading scorer. Each of the three previous seasons, Wayne had erased Nitro from postseason competition.

So it should come as no surprise that they played another spotlight game Thursday evening at Alumni Arena in Nitro — and it’s certainly no shock that this game was closely matched almost the entire way.

With Goins again leading the charge, the Wildcats closed the game on a 19-5 run to capture a 73-59 victory that send them to the top of the Cardinal Conference standings and handed the Pioneers their first loss of the season. Goins finished with 28 points and nine assists despite battling game-long foul problems.

“You never know what’s going to happen when we play them,’’ said Nitro coach Pat Jones, who watched his team come from behind three times in a game of extended runs by both sides.

Nitro improved to 10-1 with the win, and now stands 7-0 in Cardinal Conference games. Wayne fell to 11-1 overall and 4-1 in the league. The Pioneers entered the game ranked No. 3 in Class AAA, one spot ahead of the Wildcats.

After going back and forth for three quarters, the game was fittingly tied at 47 entering the final quarter and was knotted again at 54-all with six minutes remaining. That’s when Nitro put the hammer down with its defense, forcing eight fourth-quarter turnovers from the Pioneers, most of which resulted in layups at the other end.

“I told them at the start of the [fourth] quarter that it’s 0-0 and it’s a brand new ballgame,’’ Jones said. “We have to come out the same way we started the ballgame. We have to overcome the adversity. Each time we made a good run, I felt like [Wayne] answered with a solid run.’’

In the first half, Wayne responded to Nitro’s early 16-0 blitz with a 15-2 run of its own. In the second half, the Wildcats stormed off on another 15-2 burst, only to see the Pioneers immediately retaliate with a 12-4 run.

“He’s got a solid team,’’ Jones said of Wayne coach Wade Williamson. “But hats off to my girls. I told them in the locker room I’ve been here for four years, and the way they handled adversity and the way they handle the constructive criticism I give them at halftime — it’s outstanding for the young group of ladies that they are.’’

Fueled by a passel of steals that led to runouts, Nitro converted 8 of 10 shots in the fourth quarter and was 16 of 24 in the second half (67%) after falling behind 29-26 at halftime.

“We did a lot of good things,’’ Williamson said, “and we fought hard to get back in the game a couple different times after we trailed. But we missed a lot of shots that could have put us ahead. A few things happened, and we panicked just a little bit and they kind of got the momentum and rolled with it. We weren’t able to stem it back like we did in the first half.’’

Each side produced three players who scored the majority of their points. For Nitro, it was Goins, Taylor Maddox (20 points) and Patricia Ward (12 points, seven rebounds). For Wayne, it was Jasmine Tabor (21 points, eight rebounds), Alanna Eves (20 points, 15 rebounds) and Haley Wallace (16 points).

Jones was steadfast in keeping Goins on the floor in the first half after she was whistled for her second foul. Then, after Goins picked up her third and fourth in the final 33 seconds of the third quarter, she played the entire fourth period without being disqualified.

Even though Nitro and Wayne are now housed in different sections in the revamped Region 4 (Nitro in Section 1, Wayne in Section 2), there’s still a good chance they could meet in the co-regional finals later this month with a berth to the state tournament on the line. And with the history they’ve developed the last few years, it would only be fitting.

“Absolutely,’’ Jones said. “I told these girls in the locker room, ‘That’s not the last time we’re going to see them.’ They’re a great team ... they’re 11-0 for a reason coming into this game, and if we’re going to make the state tournament, these are the types of teams we have to beat.

“We’re going to see them again. They’re probably going to be a regional final team. I don’t see why they wouldn’t be. Any team that comes out of that side [of the region] is going to be a good team, and they’re there for a reason.’’

Williamson realizes his sectional will be a grind, especially with teams like St. Joseph, Logan and Lincoln County to contend with, but doesn’t exactly look forward to the possibility of playing Nitro in the postseason for a fifth straight time.

“Hopefully, we can win and they can win [our sectionals] and we don’t have to see them ever again,’’ Williamson said, “until maybe the state tournament. That would be the greatest thing. But we’ve got a lot of work to do before we can start talking about those things.

“I guess this was a game that we needed in some ways just to have a volatile atmosphere in a game like this. Sometimes it makes you grow and sometimes it makes the kids understand what I’m talking about. So we’re going to learn from this and move on. We’re really proud of who we are and where we are, but we know we’ve got to get better.’’