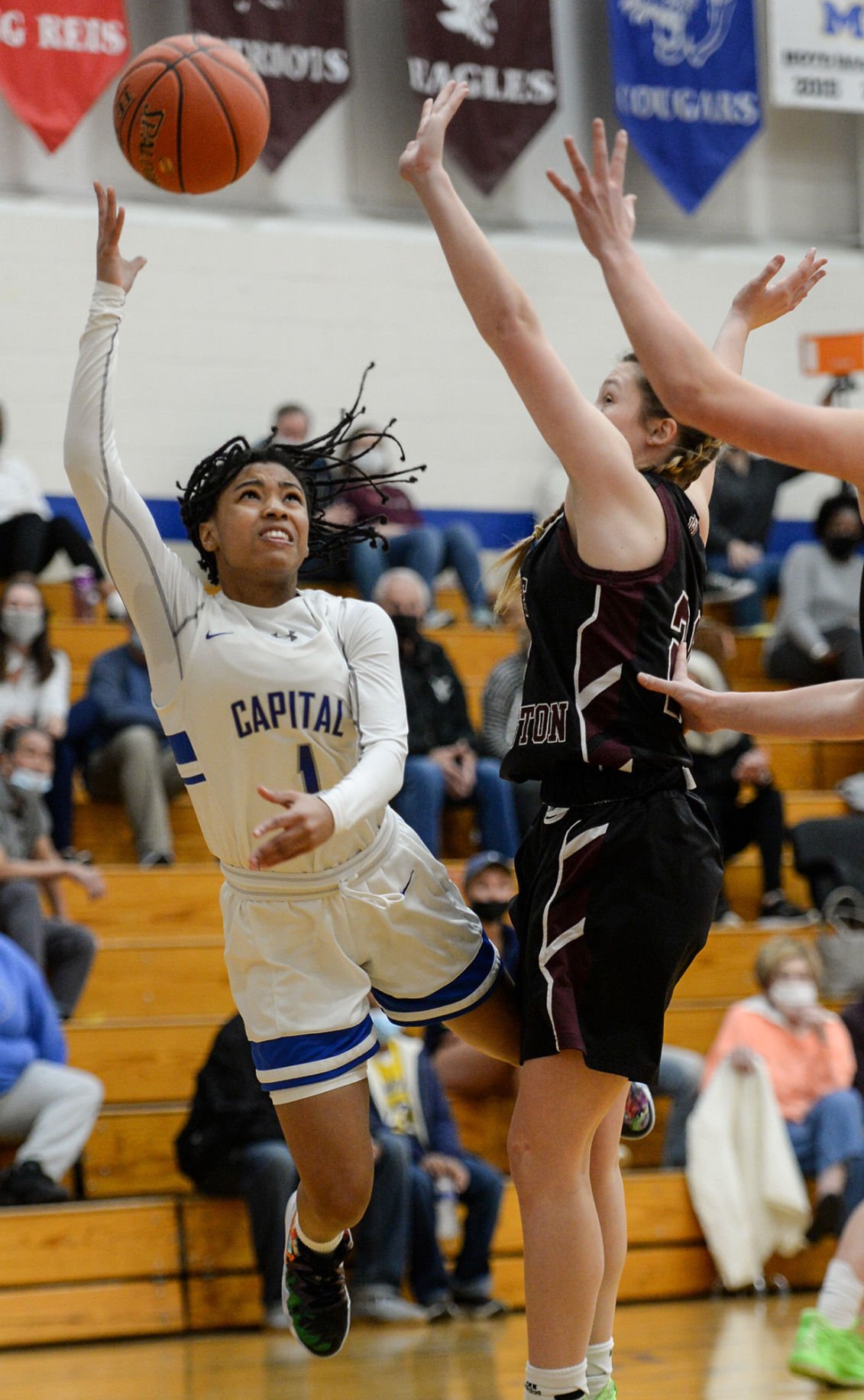 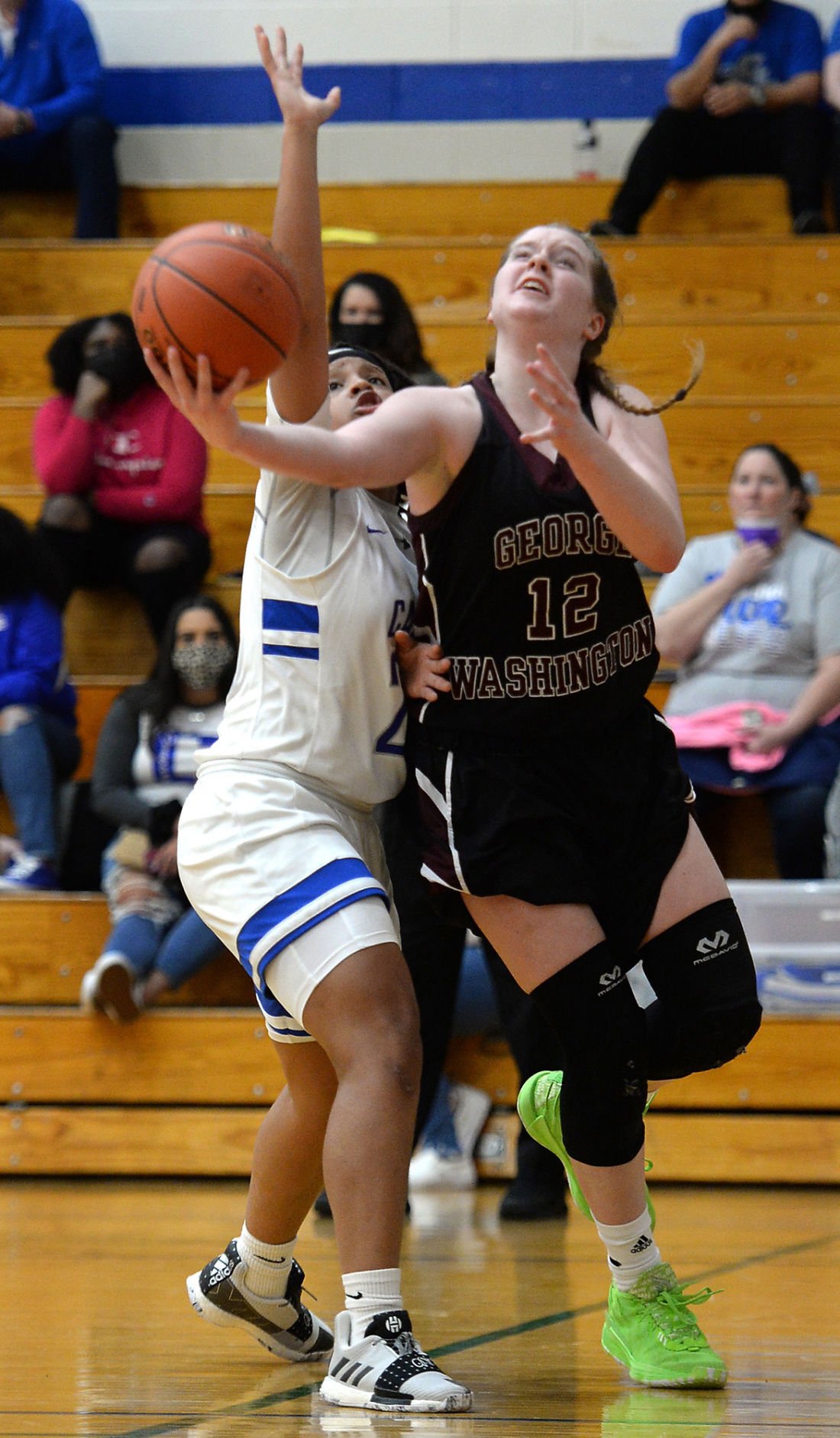 It’s been quite a memorable season so far for Capital.

All-Stater Kalissa Lacy delivered a 20-point, seven-rebound effort and Macie Mallory pumped in five 3-pointers for 15 points Saturday afternoon as the Patriots rode a strong start and held off the Cougars 59-45 at Capital High School.

It marked the ninth straight victory this season for GW (10-2) and was its 10th in a row against Capital. Over the last six seasons, those wins in the series have come by an average of 27 points.

However, it wasn’t always smooth for the Patriots on Saturday, even after they assumed a 40-18 lead early in the third quarter. Capital started applying fullcourt pressure and GW committed 12 of its 17 turnovers in the second half.

The Cougars (6-6) sliced that 22-point deficit in half — getting within 11 points at 51-40 on a free throw by Talayah Boxley with 4:41 left in the game — before Lacy turned in a transition layup and two free throws to help secure the decision.

“We built the lead early, then we didn’t execute like I wanted us to down the stretch,’’ said GW coach Jamie LaMaster. “It seemed like Capital would answer with a mini-run or a punch and, to our credit, our kids stayed scrappy.

“So credit [the Cougars] for making their run and fighting back. We had [possessions] that weren’t as clean as I would have liked, but we found a way to answer the call each time.’’

Mallory went 4-of-4 from 3-point range in the first half as GW built a 34-16 lead by the break. The advantage slowly grew as high as 22 before the Cougars found their rhythm, making five of their first six shots in the fourth quarter after going 11 of 40 in the first three periods.

“We settled down in the second half and actually started to execute a little bit more,’’ Cunningham said. “I’m proud of the girls. They came out in the second half and didn’t lay down, continued to fight. So we’re just going to keep plugging and we’re going to put four quarters together and hopefully when sectional time comes, we’ll be a tough out. GW’s a good team, and we’ve got to get over that hump of just learning how to win.’’

Boxley got comfortable in the low post late in the game and led the Cougars with 16 points, and Natalyia Sayles had 15 points and six rebounds. Mary Lyle Smith grabbed a game-high nine rebounds for GW, which led 35-25 off the boards.

“There were some silly turnovers late,’’ LaMaster said. “I told our kids maybe they thought they were trying to make a highlight reel. In the second half, [Cunningham] completely changed; he went to a wing offense into the post and we didn’t have an answer for that. We’ll have to work on that.

“But a lot of credit to our kids. They had their share of adversity early this season and then there’s being unsure each week if we’re going to have a game or not have a game. But whenever the 32 minutes start, they’re pretty much dialed in.’’