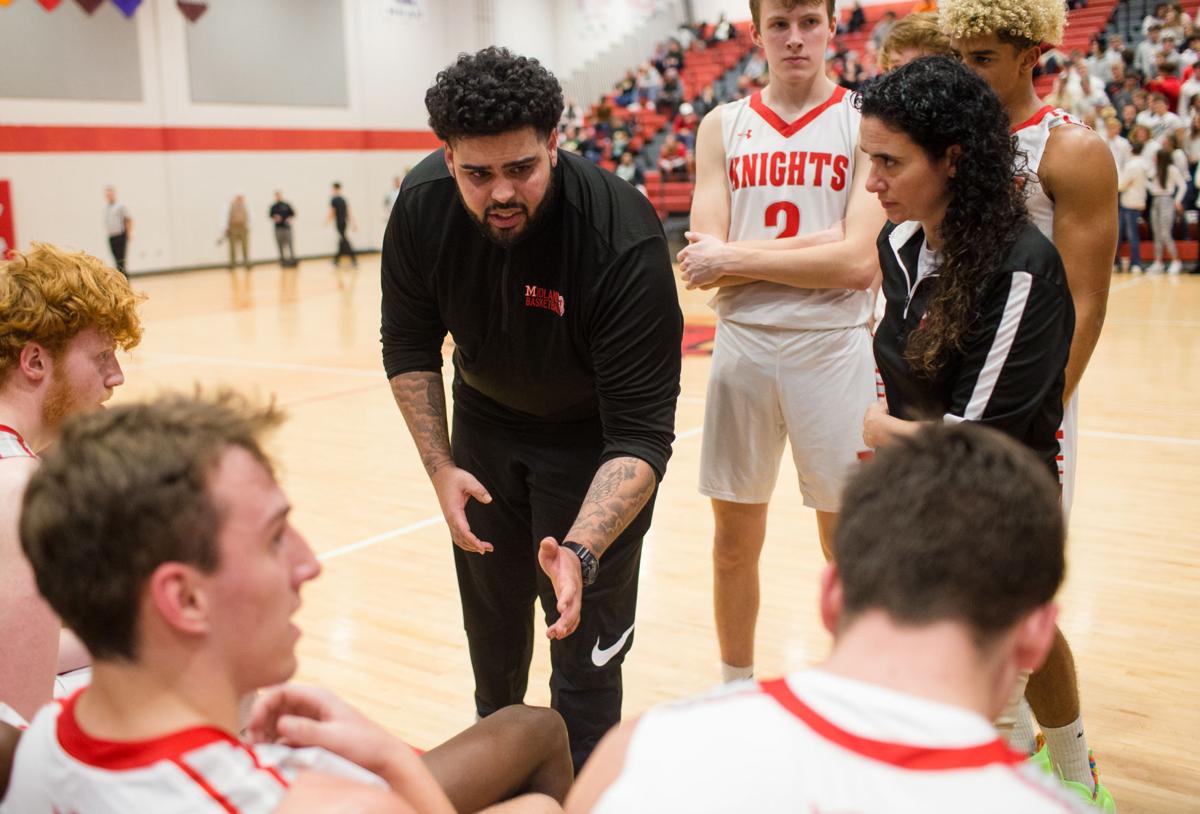 Cabell Midland coach J.J. Martin talks with his players during a timeout last season. At present, Midland is playing in the state's only prep basketball game scheduled for a Sunday this season when it hosts Parkersburg South on March 21. 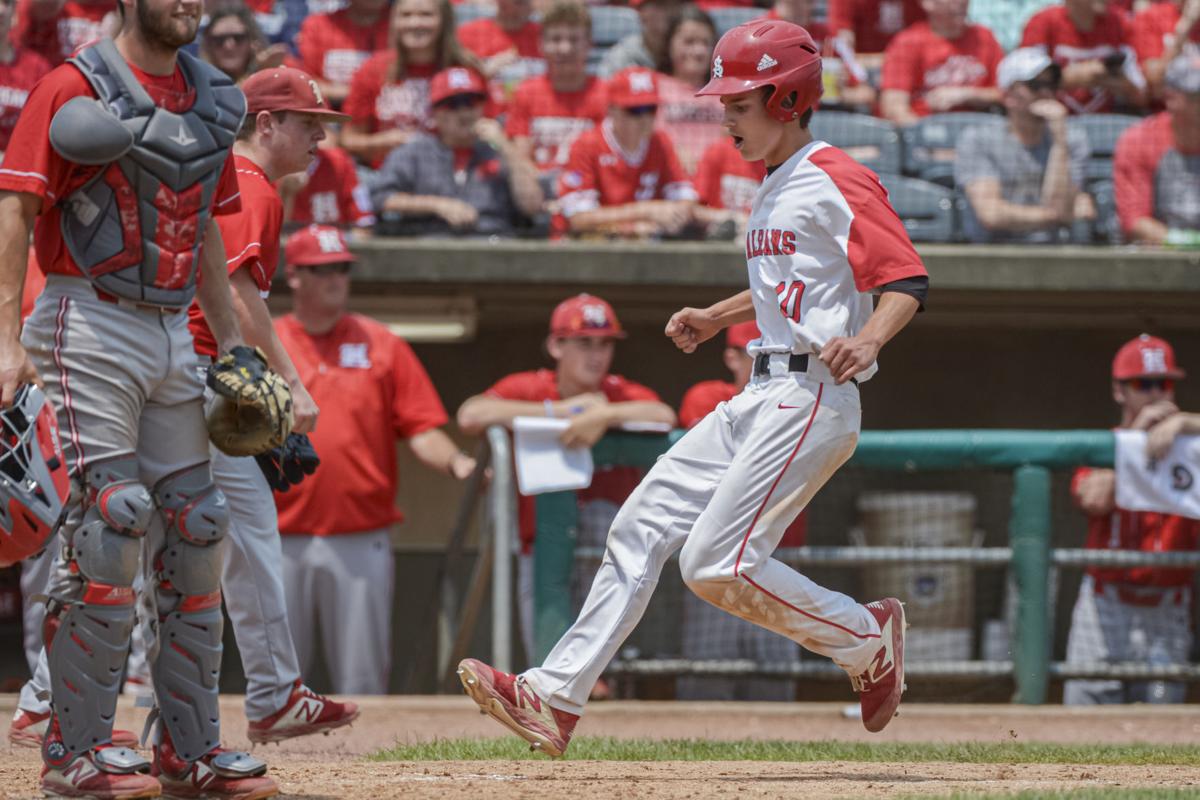 St. Albans' Drew Whitman runs home after a triple from Jake Carr during the Hurricane-SA Class AAA championship game at Power Park in Charleston on Sunday, June 2, 2019. It marked the third time in 11 years that the baseball state tournament wrapped up on a Sunday. The SSAC is allowing schools to request Sunday practices and games for winter and spring sports this year due to COVID-19 delays. 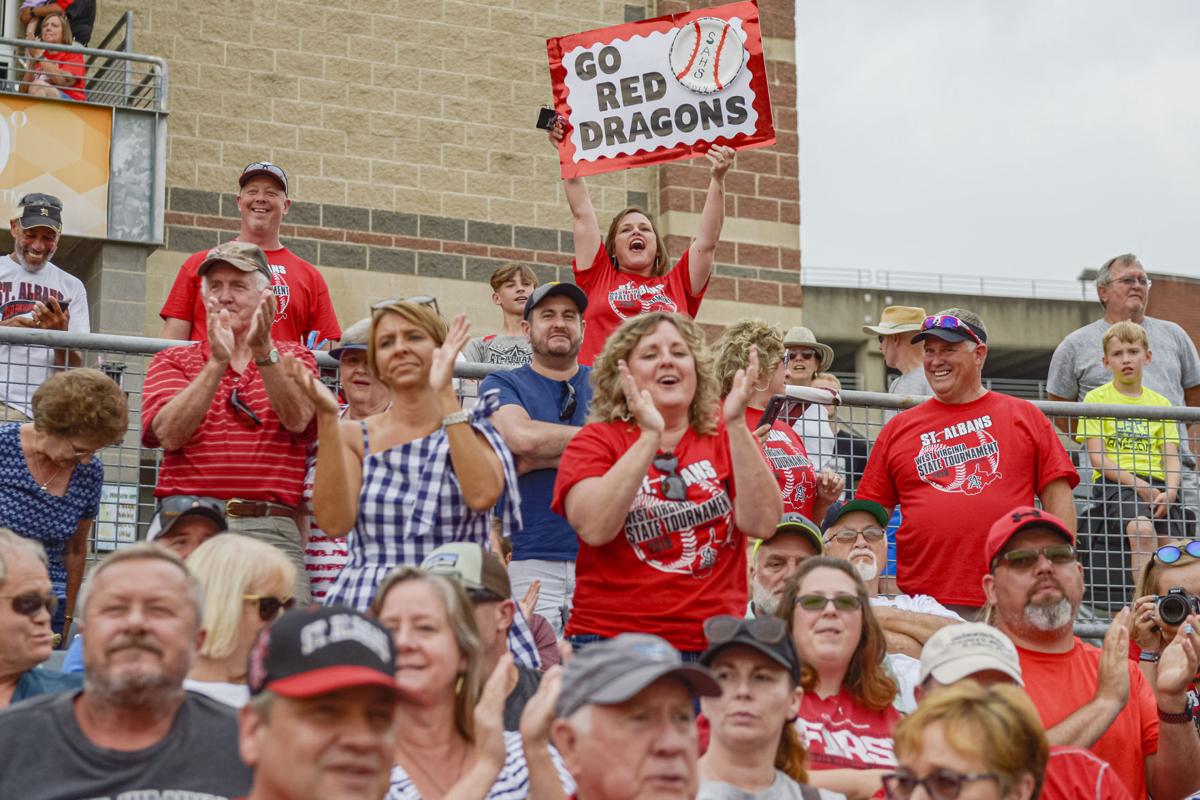 St. Albans fans cheer at Appalachian Power Park in Charleston during the 2019 Class AAA championship baseball game against Hurricane, which was played on a Sunday because of earlier rainouts.

Cabell Midland coach J.J. Martin talks with his players during a timeout last season. At present, Midland is playing in the state's only prep basketball game scheduled for a Sunday this season when it hosts Parkersburg South on March 21.

St. Albans' Drew Whitman runs home after a triple from Jake Carr during the Hurricane-SA Class AAA championship game at Power Park in Charleston on Sunday, June 2, 2019. It marked the third time in 11 years that the baseball state tournament wrapped up on a Sunday. The SSAC is allowing schools to request Sunday practices and games for winter and spring sports this year due to COVID-19 delays.

St. Albans fans cheer at Appalachian Power Park in Charleston during the 2019 Class AAA championship baseball game against Hurricane, which was played on a Sunday because of earlier rainouts.

It already shapes up as a basketball season like no other, with schedules limited to 18 games and the season itself crammed into about two months instead of the normal three for West Virginia high schools.

But one of the biggest possible changes — the ability to practice and play games on a Sunday — might not seem all that different once the season tips off the first week of March.

A quick check of some area coaches and athletic directors determined that few boys and girls basketball programs intend to play games on Sunday, while some are still mulling the opportunity to practice on that day, which had been forbidden in past seasons but became on option when COVID-19 delayed winter sports around the state.

Winfield girls basketball coach D.J. Williams, for one, doesn’t foresee using Sundays at all this season.

“I think we’ll stay away from that,’’ he said. “I don’t think our parents will go for that. Sunday is sort of their day — they can go to church, have a family meal, be together, things like that.’’

South Charleston athletic director Bryce Casto said his girls and boys programs haven’t completely closed the door on using Sundays, but haven’t opened it yet, either.

“We’d be more likely to use it as a practice day if needed,’’ Casto said. “Right now, we don’t have anything on that day, and it would be a last resort for us.

“Our intent is to not use it for a game, but of course as we realize, weather can be unpredictable and you do want the kids to play. Right now, the only time it would be utilized is if the opportunity to play a game is taken away for weather or a period of COVID prohibiting activity. I’ve talked to [boys coach Josh Daniel] and he and I are big practice guys, but we know you need some recovery time in between.’’

Most boys and girls teams have lined up three or more games per week to try and get in as many of their allotted 18 regular-season games as they can, so off days will be few, especially since state athletes have been idle since the middle of November. Gov. Jim Justice and state health officials have allowed one week of conditioning for winter sports athletes starting Monday, with formal practices beginning Feb. 15.

“We’re going to need a day of rest,’’ said Hurricane boys coach Lance Sutherland. “I’ve got three games a week once we get started, and there’s no other time to rest. We could be playing [any day of the week].

“I’ve talked with my AD and we’re both on the same page. It’s not something we want to do unless we have to, unless we’re forced to. Sunday is just a whole different thing. I don’t know how well it would work out. I have no intention of using it.’’

In another part of Putnam County, Buffalo is keeping its options open.

“Myself and our administration did decide to allow Sunday practice, if taken place in the afternoon,’’ said Bison athletic director Jeremy Litton. “We did get permission, however, and left it up to the discretion of the coach.

“However, none so far have opted to practice on Sunday or stated they were. I finished making a gym use schedule [Monday]. All my winter sports are practicing or playing all Saturdays this year, which for us is unprecedented.’’

Some schools, like St. Albans, are taking a wider approach to using Sunday for practices.

“We’re opening it up for our coaches to have practices,’’ said Rick Whitman, SA’s athletic director. “We’re not planning on playing any contests on Sunday unless it gets to where you lose a game due to cancellations or anything like that. But right now, we don’t plan any games. It’s just another day coaches can use to make up for some of their lost time as far as practices.

“We’ll leave it open to coaches; obviously, they’ll have to plan around church services and all that. But we’re giving them the opportunity if they want it. I don’t think we’ll need to use Sundays for spring sports, either, because the spring season is about the same length it normally is.’’

Practices for spring sports are set to begin on March 15, with first games allowed on April 12.

The option for schools to practice or play on Sunday is not automatic, according to Bernie Dolan, executive director of the Secondary School Activities Commission.

“They have to make a request each time,’’ Dolan said. “Some have put multiple practices on the same request.’’

The Gazette-Mail did a check of all the current girls and boys basketball schedules on the SSAC site and found just three games listed for Sundays. Two turned out to be misprints, but the third — Parkersburg South boys at Cabell Midland on March 21 — was indeed correct.

Knights coach J.J. Martin said the original intention was not to play that game on a Sunday, but his oft-revamped Mountain State Athletic Conference schedule left few choices.

“To be honest, we had to reschedule two or three times with the change of our conference schedules,’’ Martin said. “We always had an agreement to play South ... it’s definitely something we wanted to make happen. There was really no other place to fit them in except on Sunday.

“At first, we didn’t think we’d have to utilize [Sundays], but after looking at both our schedules, we really wanted to get that game in and both teams were comfortable [with March 21]. We wanted to make sure we had a full schedule, or close to it.’’

Martin doesn’t plan to use other Sundays as possible practice days.

“Ideally, we’d still like to keep Sunday as an off day,’’ Martin said. “It’s what kids are used to with church and things like that. You hate to have to interfere with that. I’m not going to say absolutely we won’t, but I think keeping that day off will kind of keep things normal.’’

About the only time Sunday games have been used in recent memory is for the state baseball tournament. Three times in the past 12 years, baseball title games have been played on a Sunday due to earlier rainouts.

Another possibility for Sunday contests this year are junior varsity basketball games, especially since the MSAC has scheduled a series of boys/girls varsity doubleheaders this season that usually don’t leave time for JV games. Sutherland said his boys JV team has one Sunday game set for the Elite Sports Center in Parkersburg.