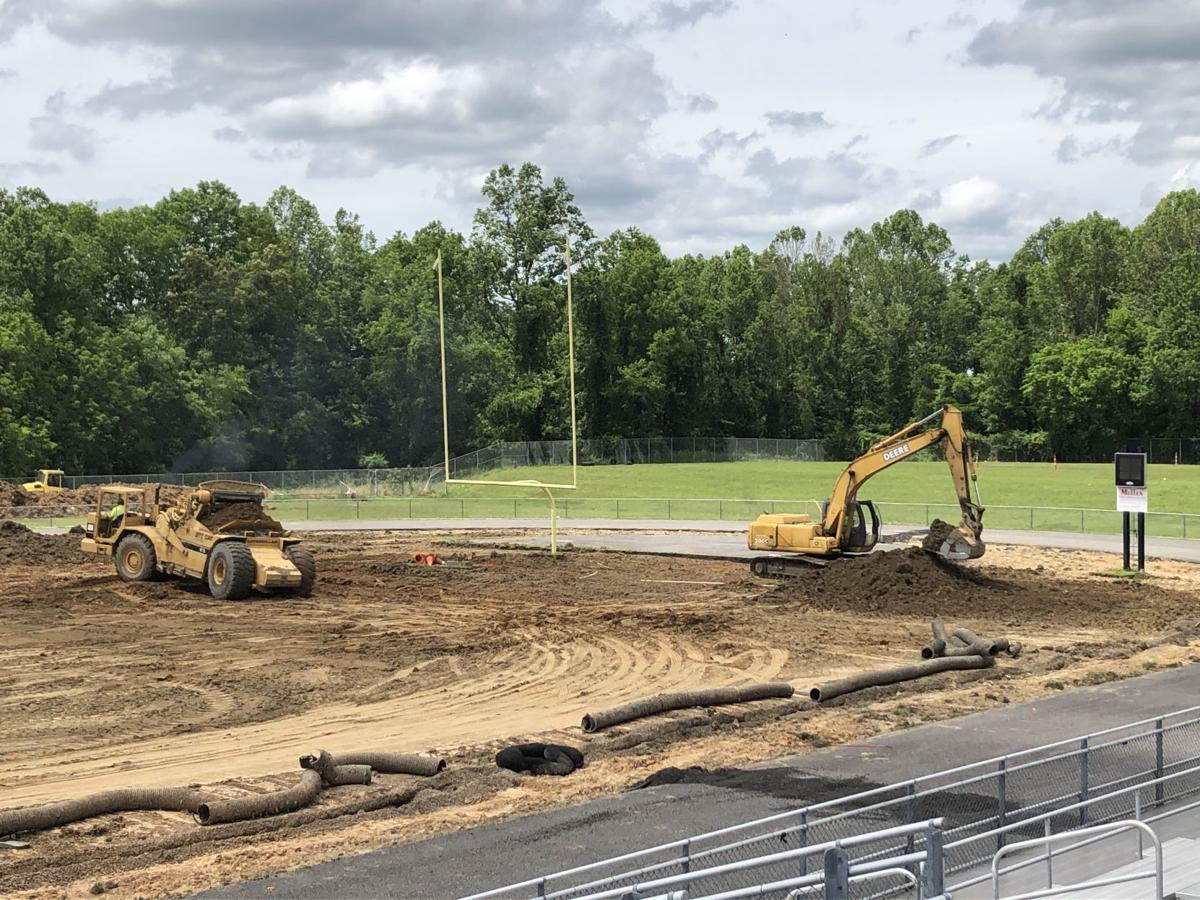 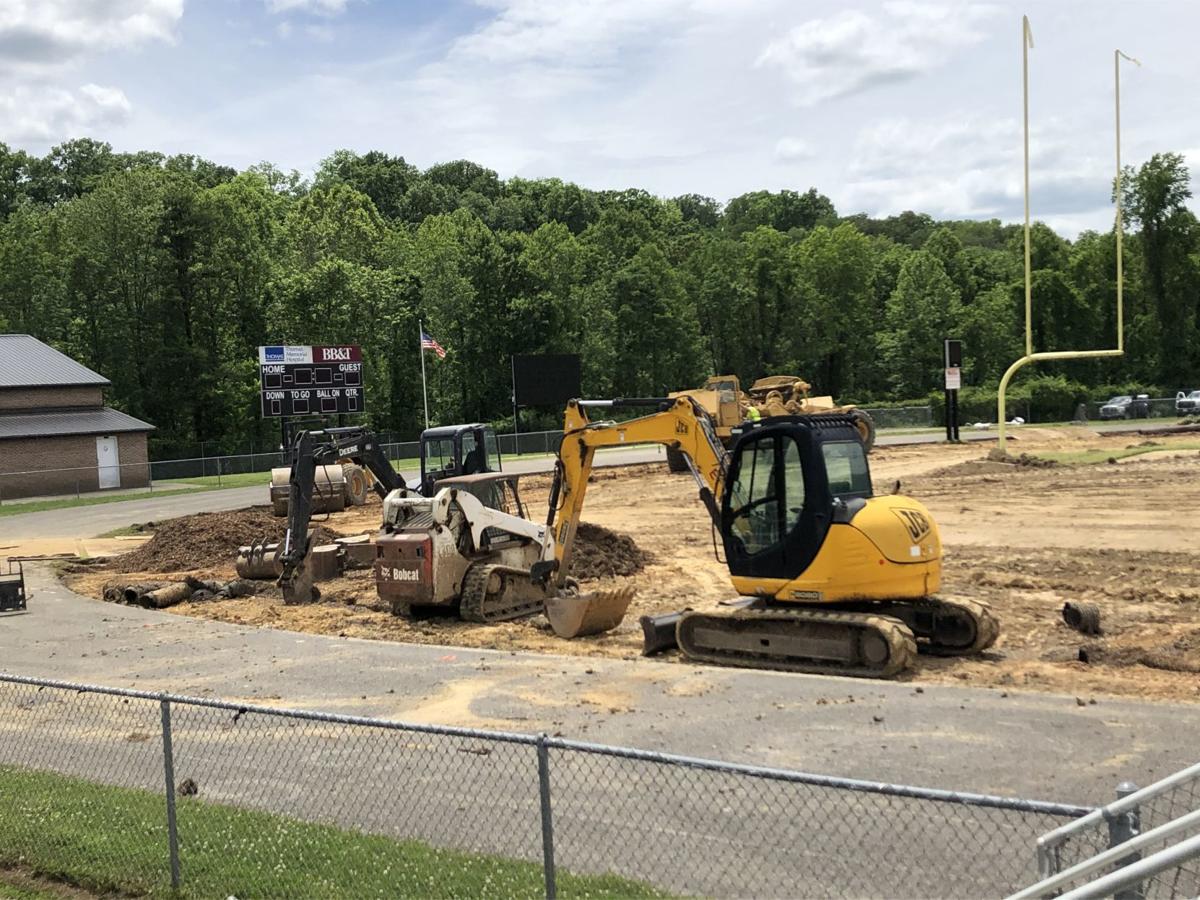 The coronavirus pandemic has shut down high school athletic facilities in the Kanawha Valley for more than two months, but progress is being made on another front this summer.

Four Kanawha County high school football fields are set to receive artificial turf before they kick off their 2020 seasons — St. Albans, South Charleston, Nitro and George Washington — as part of a continuing county Board of Education project.

Funding for the project was obtained through an excess levy tax rate increase that Kanawha residents voted for in 2018. Board of Education members then approved a nearly $9 million contract with Montreal-based company FieldTurf to outfit seven county high school football fields with artificial turf.

Sissonville and Riverside were the initial schools to get artificial turf fields installed last season. This year, St. Albans and South Charleston were the first to see excavation work begin at their fields — SA’s Crawford Field on May 4 and SC’s high school facility on May 20. The plan for this year’s four schools was to have work completed by August.

Preseason football practice around West Virginia is scheduled to begin Aug. 3, though the three-week summer practice period is set for July 6-25 for Kanawha County schools.

“We’ll be a little farther ahead if we get some dry days here,’’ said St. Albans coach Nick Watts. “I think we’re about a month away from rolling the turf out, depending on the weather, and it takes two, three weeks to get the turf down and get all the stuff sewn on, the different designs and yard markers.’’

Watts hasn’t seen much of his players since school athletic facilities were closed statewide on March 15, but has remained in touch with them on social media.

“I think our kids are excited about [the turf],’’ Watts said. “I try to keep pretty much daily contact with my guys. There’s been a lot of talk about the turf, and they question you to death on what it looks like and what kind of designs will there be and when’s it going to be done.’’

“Possibly,’’ he said, “but we don’t want it rushed. We can practice on turf at Little Creek Park or on grass at the high school if it isn’t ready.’’

South Charleston’s field was again going to be the site of the Friday Night Rivals North-South Classic on July 10, but that game was canceled on Wednesday by COVID-19 concerns.

SC coach Donnie Mays was pleased to get artificial turf, but said a bittersweet farewell to the layer of Riviera Bermuda grass that covered his field since 2013. Mays said some of the greatest golf courses in the country feature Riviera Bermuda, and SC’s field drew raves reviews from visiting opponents.

“That’s great and I’m all for it,’’ Mays said of the FieldTurf installation. “It gives us a better practice facility, too, and that’s a positive. The negative of it was it’s really hard to see all that hard work go away in such a short time.

“In our seven years [of playing games at the high school], people really talked about that field as being one of the best. Every opponent who set foot on that field said how good that surface was.’’

Mays said a portion of the Riviera Bermuda grass was salvaged and went to the golf course and nursery at Little Creek Park.

Nitro coach Zach Davis said “we’re in a holding pattern,’’ when it came to work beginning on his school’s football facility, Underwood Field.

“They came out a couple days ago,’’ Davis said, “and did some marking on the track in the middle of the field, but no excavation yet. There’s prep crews and finishing crews.’’

Davis was told by Chuck Smith, executive director of the county’s facilities planning, that his field would be ready to go for Nitro’s home opener on Sept. 4 against St. Albans.

“I’ve heard sometime in August, potentially,’’ Davis said of a possible completion date, “but we have City Field next to us, so it’s not a big deal for us. We have access to a practice field. I get a couple text messages every day from our kids asking when the turf will be done and when can they get on it. I said, ‘Guys, when it happens, it happens, and be thankful for it.’

“I’ve heard nothing but great things about Chuck Smith and he said it would be done before our first game, and I’m thrilled we don’t have to paint the lines and put in money to make sure the grass looks right. Things that make a grass field look good can definitely cost you a lot of money and a lot of time.’’

Smith did not immediately respond to a Gazette-Mail request for a project update.

“I’m told we’re the last to get it,’’ Edwards Jr. said, “and that they’ll get started on it sometime in June. They’re going through the stages with [work at the other schools].’’

GW has long sported a now-worn 35-yard patch of artificial turf at one end of its grass field that was used for practice purposes. Edwards expects that patch will also be part of the new project.

“It’s going to be in the same format as it is now,’’ Edwards said. “Anything inside the track will be turf. It’s an extra field, and we need as much area as we can get, because we’ve got a lot of people [practicing] — there’s soccer and lacrosse, too.’’

Another Kanawha County school, Capital, plays at University of Charleston Stadium, which has long been fitted with artificial turf. Capital is not part of the current football project, but one of the school’s soccer fields will receive FieldTurf.

Herbert Hoover, the seventh and final Kanawha County school to receive artificial turf for football, is set for a 2022 installation, once the Board of Education has access to the new school site near Elkview.