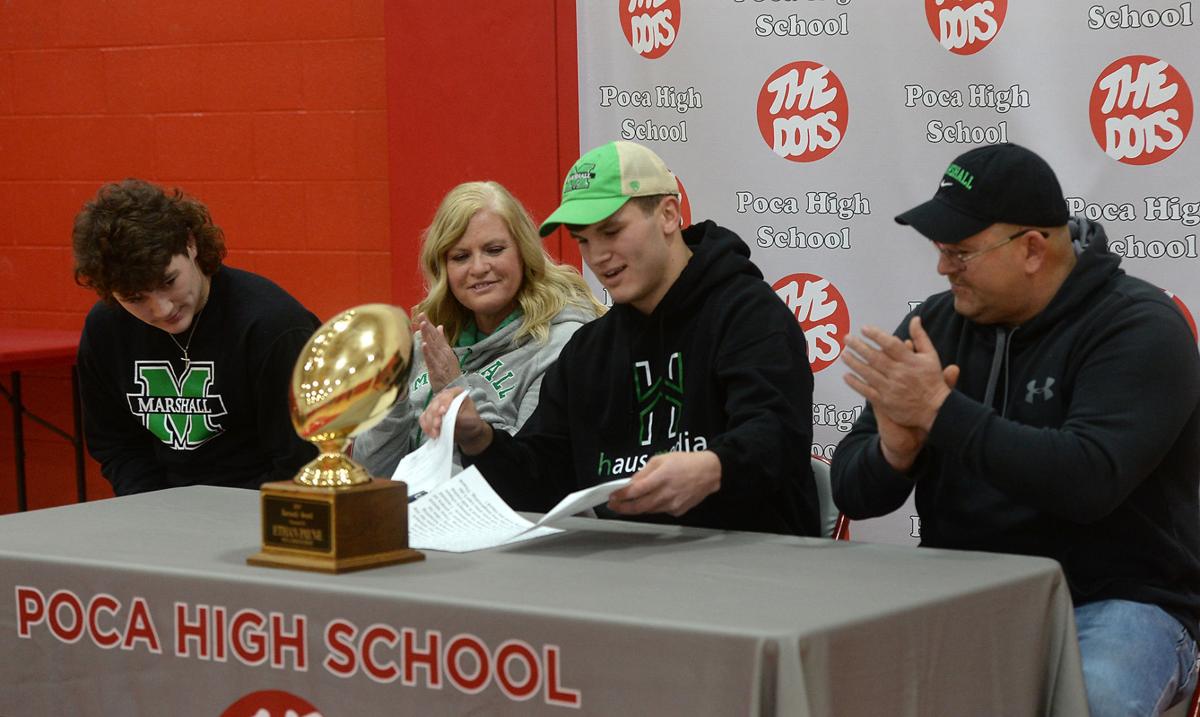 Sherry and Brent Payne applaud as their son, Ethan Payne (center), looks over his paperwork after signing Wednesday to play football at Marshall next year. His brother and Poca teammate Toby Payne is at left. 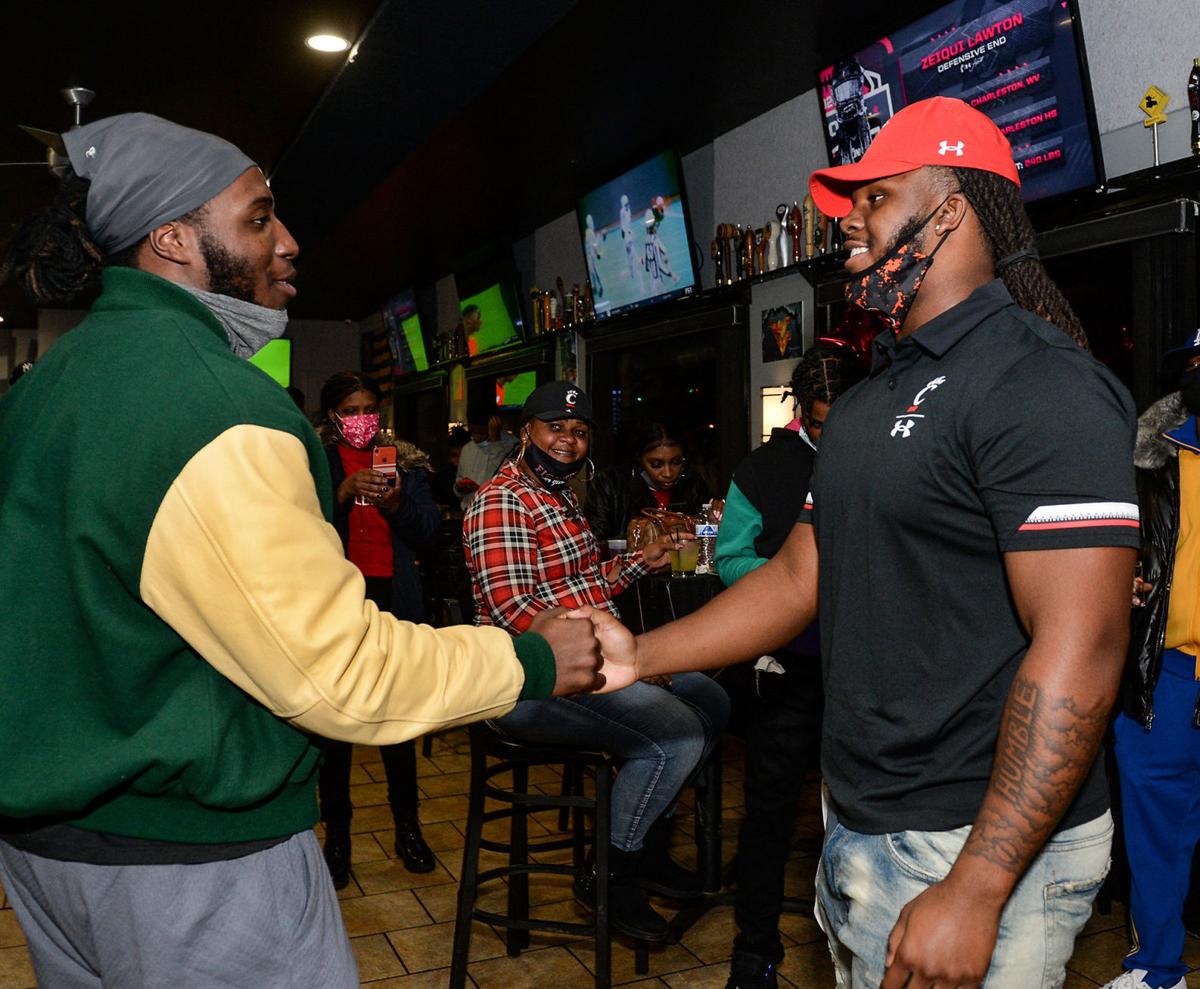 After signing Wednesday at the Cold Spot in Dunbar to play for the University of Cincinnati, South Charleston’s Zeiqui Lawton (right) gets congratulated by cousin Turan Rush, who played for Capital and now plays for Eastern Michigan.

Sherry and Brent Payne applaud as their son, Ethan Payne (center), looks over his paperwork after signing Wednesday to play football at Marshall next year. His brother and Poca teammate Toby Payne is at left.

After signing Wednesday at the Cold Spot in Dunbar to play for the University of Cincinnati, South Charleston’s Zeiqui Lawton (right) gets congratulated by cousin Turan Rush, who played for Capital and now plays for Eastern Michigan.

POCA — Ethan Payne certainly left Poca football in a better place. Now it’s on to his next challenge.

Payne, the 2019 Kennedy Award-winning running back for the Dots, signed his national letter of intent to play at Marshall during a short ceremony Wednesday at the Poca High School auxiliary gym.

“It’s kind of a relief,’’ Payne said. “It’s been a long journey, a process here in high school. I always dreamed about playing Division I football, and this is a dream come true.’’

When Payne arrived on Poca’s campus 31/2 years ago, the football program was mired in a losing streak that eventually reached 39 games, second-longest in state history. But over his final three seasons, the Dots went 26-4, including their first playoff win since 2006 and their first 10-0 regular season since 1978.

Payne’s arrivals always seem steeped in history. He was born on Sept. 15, 2002, when Poca was in the midst of taking three straight state championships (2001-03), something that had never been done before in Class AA. Now the Dots are expected to keep the ball rolling even after his departure.

“Our class is very thankful for our coaches putting us on the right track again,’’ Payne said. “We feel like this program has made a step forward for the future.

“I will leave here with a bittersweetness in my mouth, but I felt like we did all we can here and everything happens for a reason. So if that reason was this senior class didn’t get a state championship, maybe it makes next year’s class even hungrier for a state championship.’’

Greg Adkins, Marshall’s recruiting coordinator and offensive line coach, said Payne is being counted upon to run the ball.

“The No. 1 thing that stands out about Ethan Payne is he’s a tough kid,’’ Adkins said. “I think he’s an outstanding running back and that’s the plan for us is to play him at running back here.

“He’s been obviously a very productive player. Unfortunately, he didn’t get to play many games this year ... if he would have played a full season, he probably would’ve had similar stats that he had the year before, which were arguably ... the best that’s ever done it in this state.’’

Dots coach Seth Ramsey, who attended Wednesday’s ceremony, thought back not only to the good times, but also to Payne missing the team’s final game this year because of COVID-19 contact tracing, Poca later being eliminated from the Class AA playoffs due to Putnam County’s coronavirus numbers, and the hip injury that caused Payne to sit out three-plus games as a sophomore.

“It’s extremely gratifying and we’re extremely proud of him,’’ Ramsey said. “He put in a lot of hard work and went through some adversity and was able to bounce back from a difficult injury and different roadblocks along the way. We’re looking for him to do even bigger things at the next level.

“We’re thankful for him and his teammates and what they did for this program, for this school and for me personally. I’ll always hold a dear place in my heart and I’m really excited about the next chapter.’’

“I’ve been ready, for sure,’’ Lawton said. “It’s been a long time coming, but it’s finally here. As soon as I can, I’ll start training at the collegiate level. I’ll get my workout book in January and come in and start doing that.’’

Lawton signed his papers to attend Cincinnati on Wednesday during a small ceremony at the Cold Spot in Charleston. For him, the journey to being a college athlete began when he walked into South Charleston High School as a freshman and made up his mind that he was going to set a high standard for himself.

Lawton became SC’s career sacks leader this season, collecting 10 sacks to finish with 35 in 34 games played. He finished with a team-high 48 tackles for the Class AAA champion Black Eagles, including 19 tackles for loss and 19 quarterback hurries.

He was selected as an All-State first-team defensive lineman as both a junior and senior after being a second-teamer as a freshman and sophomore. Lawton was also chosen as the Gazette-Mail’s Kanawha Valley Player of the Year.

Hughes, a two-time first-team Class AAA All-Stater who did all the kicking and punting at GW for four years, expects to handle kickoffs, field goals and extra points at Appalachian State.

“We haven’t really talked about me punting,’’ Hughes said, “and I don’t think I see that in the future, but I’m open to anything to help the team.’’

Hughes, now 6-foot-2 and 170 pounds, arrived at GW as a smallish soccer and basketball player, but quickly developed into one of the state’s better kickers. His progression was helped in the summer by Adam Tanalski of the Hammer Kicking Academy near Buffalo, New York. Tanalski met Hughes at a camp in Morgantown.

“He reached out to me,’’ Hughes said, “and told me I had the capability to play at a high Division I level. At the time, I didn’t believe him. It was my sophomore year and nobody had told me that before. I trusted him and believed in him, and he helped me get to where I was at that point in time, and started getting my name out to college coaches.

“I also want to thank my mom and dad. They sacrificed a lot over the last four years traveling me to kicking camps across the country — Orlando to Las Vegas to Dallas to Buffalo to Clarksburg. There are showcases like any other position. You go head to head with other kickers, display what you have and get ranked in these ranking systems ... without that, it’s hard to get to a national level.’’

GW coach Steve Edwards Jr. said he could see early in Hughes’ high school career that he had a talent that could pay off, more so in football than soccer.

“I just suggested to him that there was a little bit more money in this game than the other,’’ Edwards said, “and maybe it’s something you should be thinking about to get an education paid for, and he took it to heart.’’