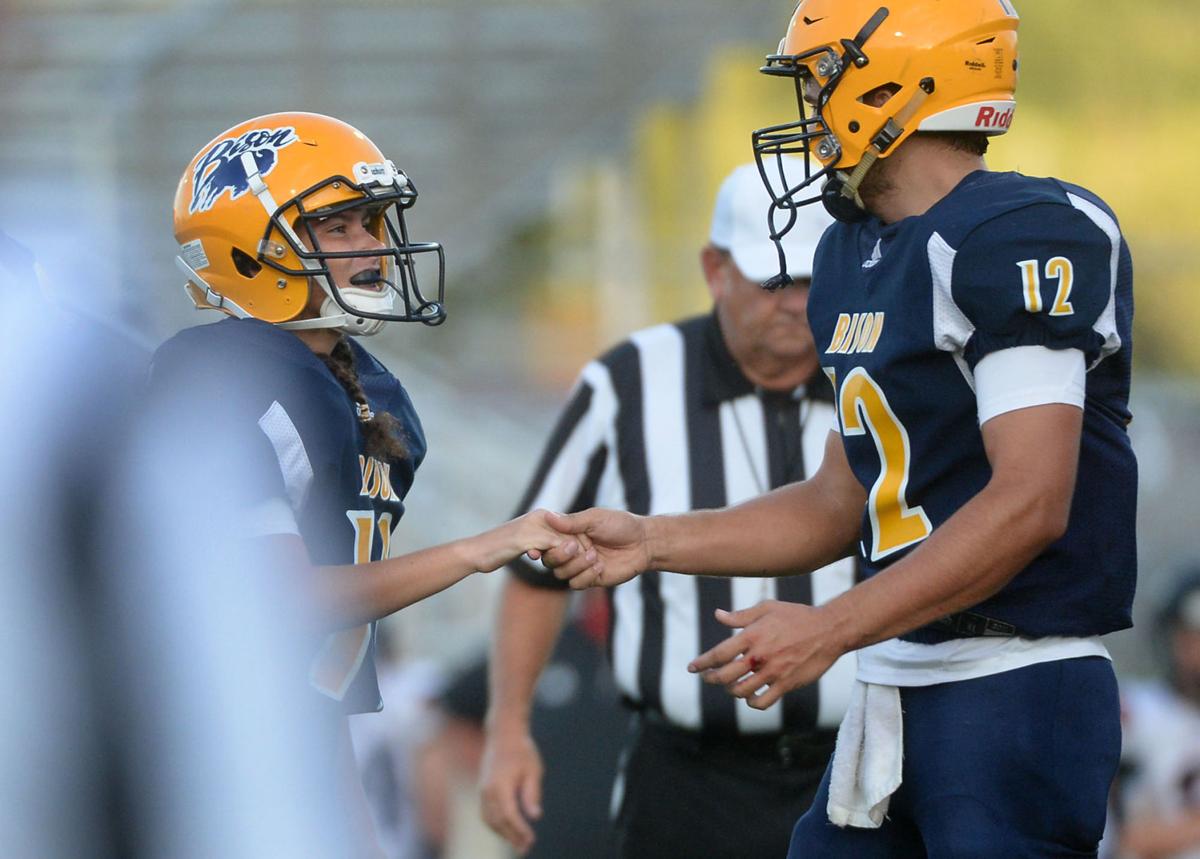 Buffalo kicker Taylor Reedy (left) is congratulated by holder Jackson England after she made her first extra point last Friday against Ravenswood. 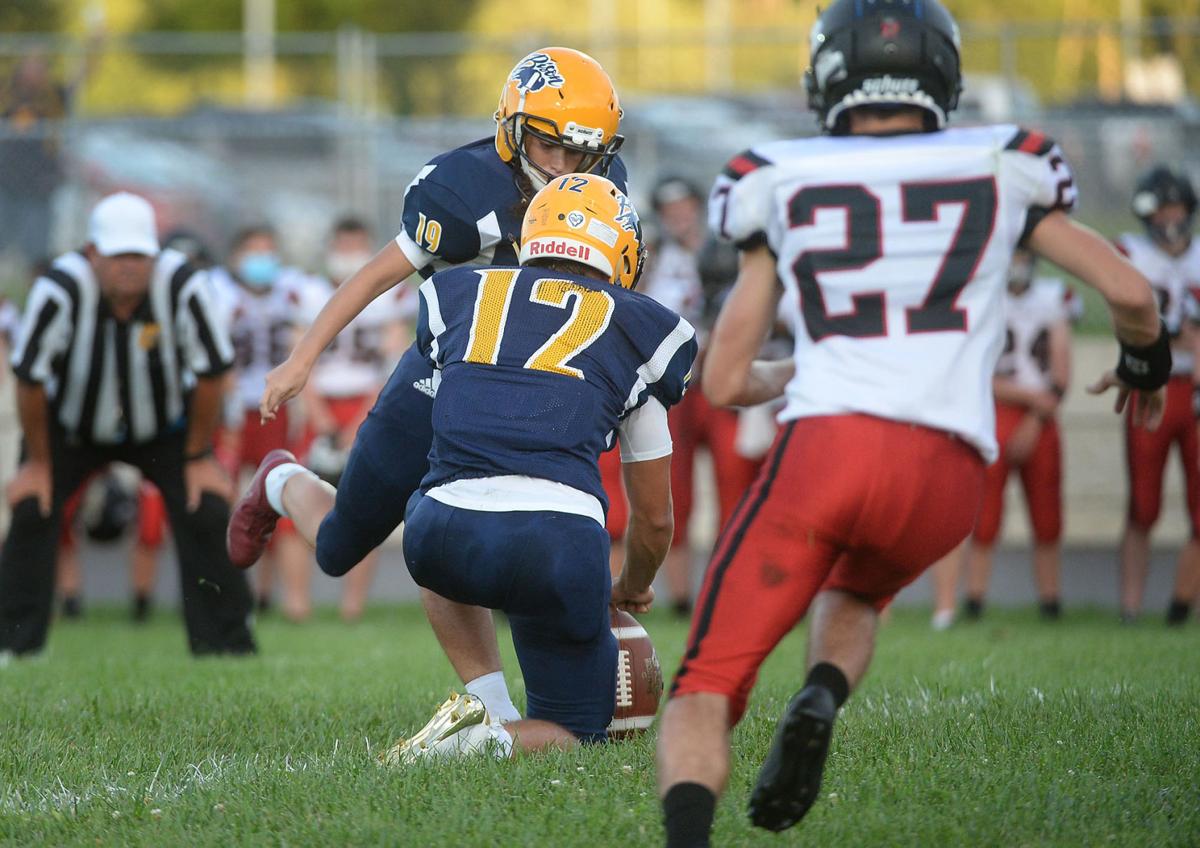 Buffalo’s Taylor Reedy attempts her first extra-point kick against Ravenswood last Friday out of the hold of Jackson England. The kick was good. She is also a travel soccer player besides kicking for the football team.

Buffalo kicker Taylor Reedy (left) is congratulated by holder Jackson England after she made her first extra point last Friday against Ravenswood.

Buffalo’s Taylor Reedy attempts her first extra-point kick against Ravenswood last Friday out of the hold of Jackson England. The kick was good. She is also a travel soccer player besides kicking for the football team.

Way back when (in the 1990s), it was unusual to see a girl kick for her high school football team. Not so much anymore, though.

There are several such athletes in southern West Virginia alone, and two of them suited up for opposing teams last Friday when Buffalo hosted Ravenswood — Taylor Reedy for the Bison and Cassie Bowsher for the Red Devils.

Reedy made her first extra-point kick in Buffalo’s 21-6 victory, but her next two attempts were blocked. Bowsher didn’t get the opportunity to kick for Ravenswood.

“It was cool,’’ said Buffalo coach Brian Batman. “[Reedy’s] a soccer player, and she plays travel soccer because we don’t have soccer here.

“The first week of practice, we were messing around with her about kicking, and then she kicked one and we went: ‘Oh, we may have something here.’ ’’

Batman, who said Reed could attempt field goals or 30 yards or less, said she was given no special preference for her place-kicking duties.

“We have another kicker,’’ Batman said, “and they had a kick-off [last] Thursday and she won. She may not kick next game because she has to win her job just like everyone else does, and we told her that from the get-go. ‘We’re not giving you anything; you’ve got to earn it.’ And she earned it this week.

“At least she made one. If we’d blocked a little better, she might have made three, but it didn’t work out that way.’’

Ravenswood was also called for roughing the kicker on Reedy’s successful try, which got the Bison 15 extra yards marked off prior to the next kickoff.

It’s certainly not a rarity now to see girls booting the ball through the uprights. Among those currently kicking for their high school teams in the southern part of the state are Cabell Midland’s Olivia Charles (9 of 9 on extra points last week), Ripley’s Kaitlyn Lawrence (3 of 3) and Point Pleasant’s Elicia Wood (1 of 2 last week, 21 extra points last season).

Dillon dealingPoca coach Seth Ramsey gushed all summer about the improvement of senior linebacker Dillon Taylor, who added 20 pounds of muscle and increased his speed and quickness.

It’s not like Taylor was slacking last year, as he was charted with a team-high 175 tackles, 26 for lost yardage, on a team that went 11-1 and reached the Class AA playoff quarterfinals.

Taylor was a tackling machine in the Dots’ opener last week, a 34-6 win at Wheeling Central. Among his highlights were three quarterback sacks and two fumble recoveries. He even had the trifecta on one second-quarter play, sacking the quarterback, forcing a fumble and recovering it himself on the Central 11.

“That one play there early on when he blew up the blocking back and he blew up the quarterback,’’ Ramsey said, “that there just personifies his intensity and what he does every day in practice and every day in the offseason. That’s him in a nutshell.

“He’s done a phenomenal job and thinking back to last year, he just got better and better as the year went on. Probably midway through his sophomore year, things started clicking for him and he started playing faster and he built off that last year. He’s got a chance to have a whale of a year this year, and he did real great for us [at Central].’’

Taylor, who now stands 6-foot-1 and weighs 210 pounds, said he wanted to go out with a bang in his final season at Poca.

“Absolutely,’’ Taylor said. “As soon as the offseason started, I got in the weight room and got running the hills with friends. I wanted to go big or go home my senior year.’’

The streak goes onDennis Ball is proud of his streak of keeping stats for the Cabell Midland football team — he’s seen and tracked the numbers for all 298 games the Knights have played since the school opened in 1994.

Ball’s streak goes even longer than that — he’s now at 484 straight games since he began stats work in 1977 at Milton, which combined with Barboursville to form Cabell Midland. But that impressive run nearly came to an end last Friday.

Midland’s team, which had a COVID-19-induced open date on its schedule, traveled to Fairmont that day for a scrimmage with Fairmont Senior. But as the Knights starters were getting set to take the field, Midland got a call from Parkersburg South asking if it could come to town and play that night, because South’s game against University was called off at the last minute by Monongalia County’s high coronavirus totals. So the Knights hopped on the bus and headed to Wood County for a chance to play a game that counted.

Ball, meanwhile, was celebrating his 56th wedding anniversary with his wife Judy at the Texas Roadhouse restaurant in Huntington when he got a call about 5 p.m. from Midland coach Luke Salmons.

Ball, 77, said his wife wasn’t unhappy with the fact their anniversary dinner was put on hold.

The game didn’t kick off until 8 because of the last-minute circumstances, and Midland won 69-34.