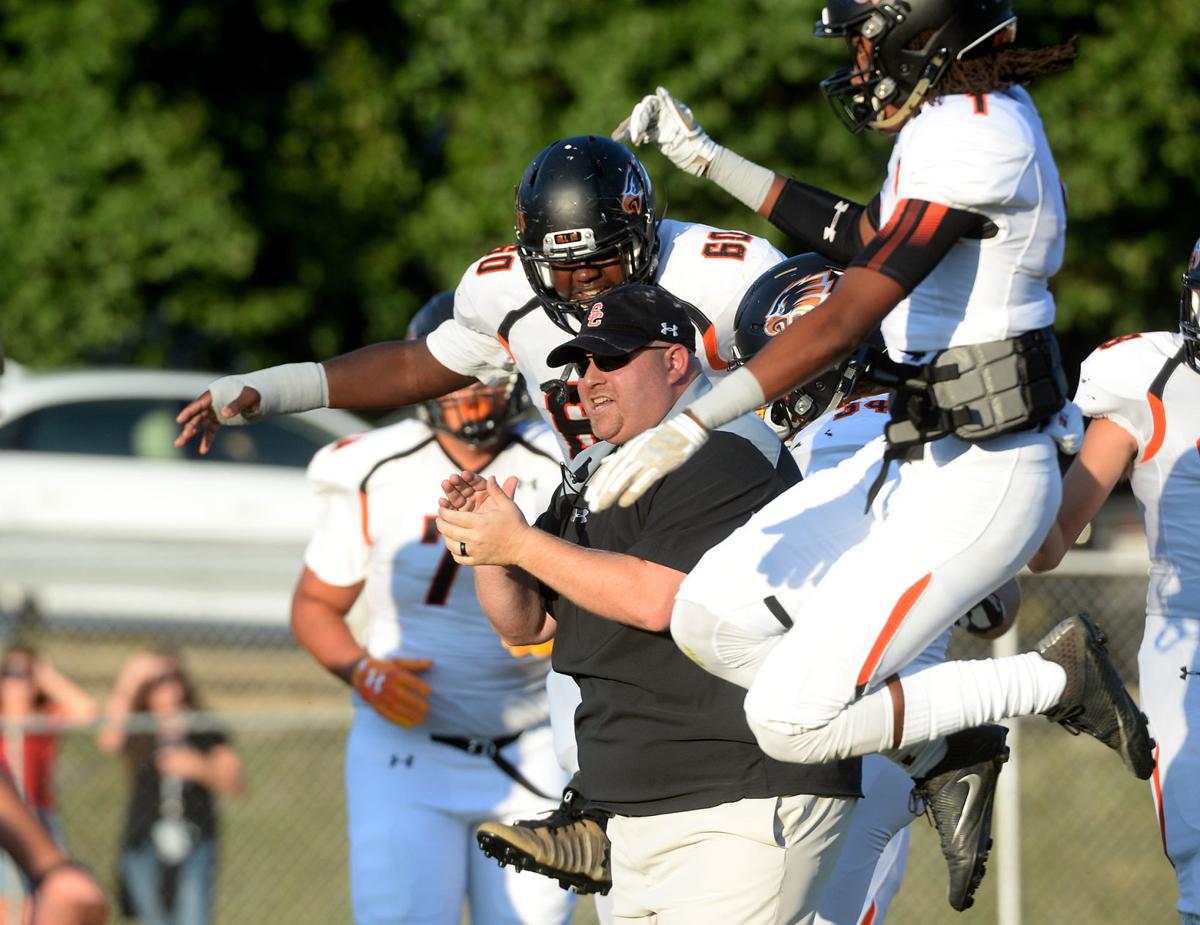 South Charleston football coach Donnie Mays gets his players pumped up before a game. Will his players have the same energy this season after so much uncertainty due to COVID-19? 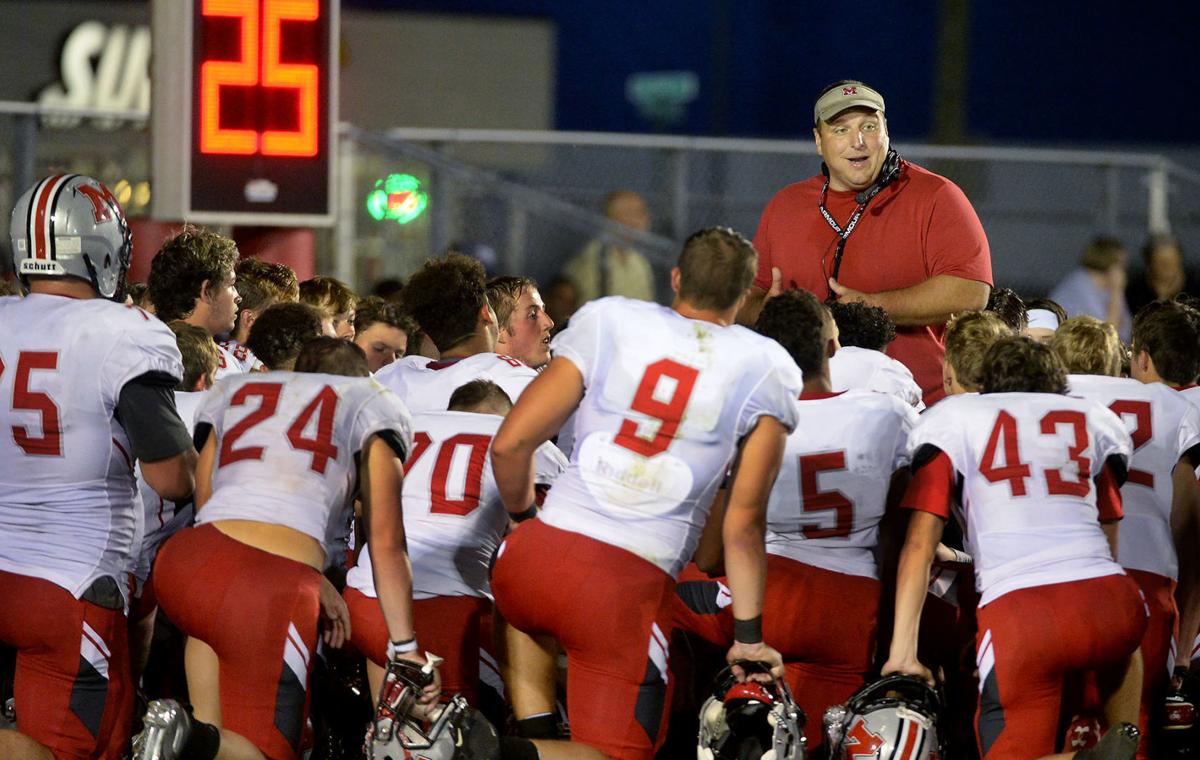 Cabell Midland coach Luke Salmons talks to his players during halftime of a game against St. Albans last season.

South Charleston football coach Donnie Mays gets his players pumped up before a game. Will his players have the same energy this season after so much uncertainty due to COVID-19?

Cabell Midland coach Luke Salmons talks to his players during halftime of a game against St. Albans last season.

Life as a high school athlete hasn’t been easy the past few months due to the uncertainty of the coronavirus pandemic, and now the attention shifts to prep football.

First, off-season conditioning and weight lifting was halted by COVID-19 concerns in mid-March, then the three-week summer practice period was delayed a month in most counties, and when it finally arrived, football players couldn’t hit one another or work out against athletes from other schools, as they’d done in past years.

Last week, the Secondary School Activities Commission pushed back the start of preseason practice from Aug. 3 to Aug. 17, and canceled the opening week of the regular season to get in line with Gov. Jim Justice’s mandate that schools wouldn’t reopen until Sept. 8.

But at least, there’s still a season for now.

South Charleston coach Donnie Mays said he doesn’t worry much about the psyche of his players as they deal with the constant reshuffling and adjusting of schedules.

“Kids are resilient,’’ Mays said. “One thing I’ve noticed, they came out working hard Day 1 because they wanted to be back together.

“One thing I can tell you about kids is that the adults are sitting back and worried about litigation and making those decisions and making sure everything’s safe. You see kids going to pools and going to basketball tournaments where hundreds and hundreds of people are coming to watch. All these people are trying to put kids in camps in surrounding states. The kids haven’t shut down. Adults are trying to be safe about things, but things are normal in the world of 16- to 20-year-olds. They just want to have a season; we just want them to have an opportunity.’’

Mays would rather not see a repeat of what happened to West Virginia’s basketball and spring sports seasons, which were, respectively, cut short and completely canceled.

“For the SSAC and the governor to come together and agree, it’s a great thing,’’ Mays said. “It’s good that they’re trying and trying to have a season for the kids. After watching what happened in March with the girls state tournament and the boys tournament, and watching spring sports not being able to have a season and seeing the kids and their reactions, it was hard to watch.

“I first and foremost got into education to help kids, and when you see things taken away from them — that once-in-a-lifetime opportunity — it’s hard to watch.’’

Cabell Midland football coach Luke Salmons admits that as things keep getting pushed back, he and his assistants have to occasionally dole out positive reinforcement to their players to keep them on track. That is, when those players are on their own. When they’re reunited, they’re reinvigorated.

“I think we all do,’’ Salmons said of the occasional pep talk, “but when you’re together, all that goes away. When you’re out there practicing and working together, that’s all we think about. One of the best things about being together is that if we’re not allowed to be together, we’re miserable. Because you read all that stuff and hear stuff — and we do — and it’s not usually every day but every few days. If kids have got to know why they’re doing it, no matter what the situation is, it’s on them to do it.

“We’re always telling them: We’re going to play, and you have to be all in, and that has to be your attitude, you have to have that mindset or it’s just a waste of time. Not every day, but they kind of get a vibe when something comes out in the media or they’re hearing something or read something or know something from their parents. We always bring them back and focus on that day and get them excited again. It’s different that way, and it helps more because it gives them a time.

“They’re kids, so they look at it like when we’re playing, it’s a good thing. Before, when no one had said anything, we’ve just kind of been going along. With this, you have some structure as far as that goes.’’

George Washington had problems much of last season moving the ball on the ground, but the favorable news is that the Patriots return both of their main running backs this year — D’Anthony Wright and Hasten Pinkerton.

GW also brings back several offensive linemen from an 8-4 squad, which gives coach Steve Edwards Jr. hope for an across-the-board improvement in the running game.

“My goodness, we were five, six weeks into the season last year and we still weren’t running in the right holes, and some of the holes weren’t like they thought they were going to be. They were there — just not as big as they want them.’’

Quarterback R.T. Alexander wound up as GW’s top rusher for the season with 292 yards and one TD. Alexander threw for 30 scores last season in 12 games and the Patriots managed only six other rushing touchdowns.

In what turned out to be the final game of his record-setting run at Martinsburg, coach Dave Walker was asked about the promise of his ninth-grade team following the Bulldogs’ victory against Cabell Midland in the Class AAA finals last December.

Walker had previously gone on record as saying that freshman squad, which also included some eighth graders, was the best he’d ever had in his 22 years at Martinsburg.

“Well, they are,’’ Walker said back then, “and that’s not to say they will be in two years. I mean, I may have spoke too soon on that.

“We’ve got some good ones coming up, as we always do, and as long as they work hard, they’ll have a chance for success. But they’ll get out of it what they put into it.’’

In other words, not such great news for the rest of the teams in the Class AAA division — even though Walker has since departed to coach at Concord University and was replaced at Martinsburg by longtime assistant Britt Sherman.

Walker won a state-record 304 games in 31 seasons at Martinsburg and East Hardy (where he spent nine years) and guided the Bulldogs to victories in his final 56 contests — another state mark — and four straight AAA crowns, matching their own state record.