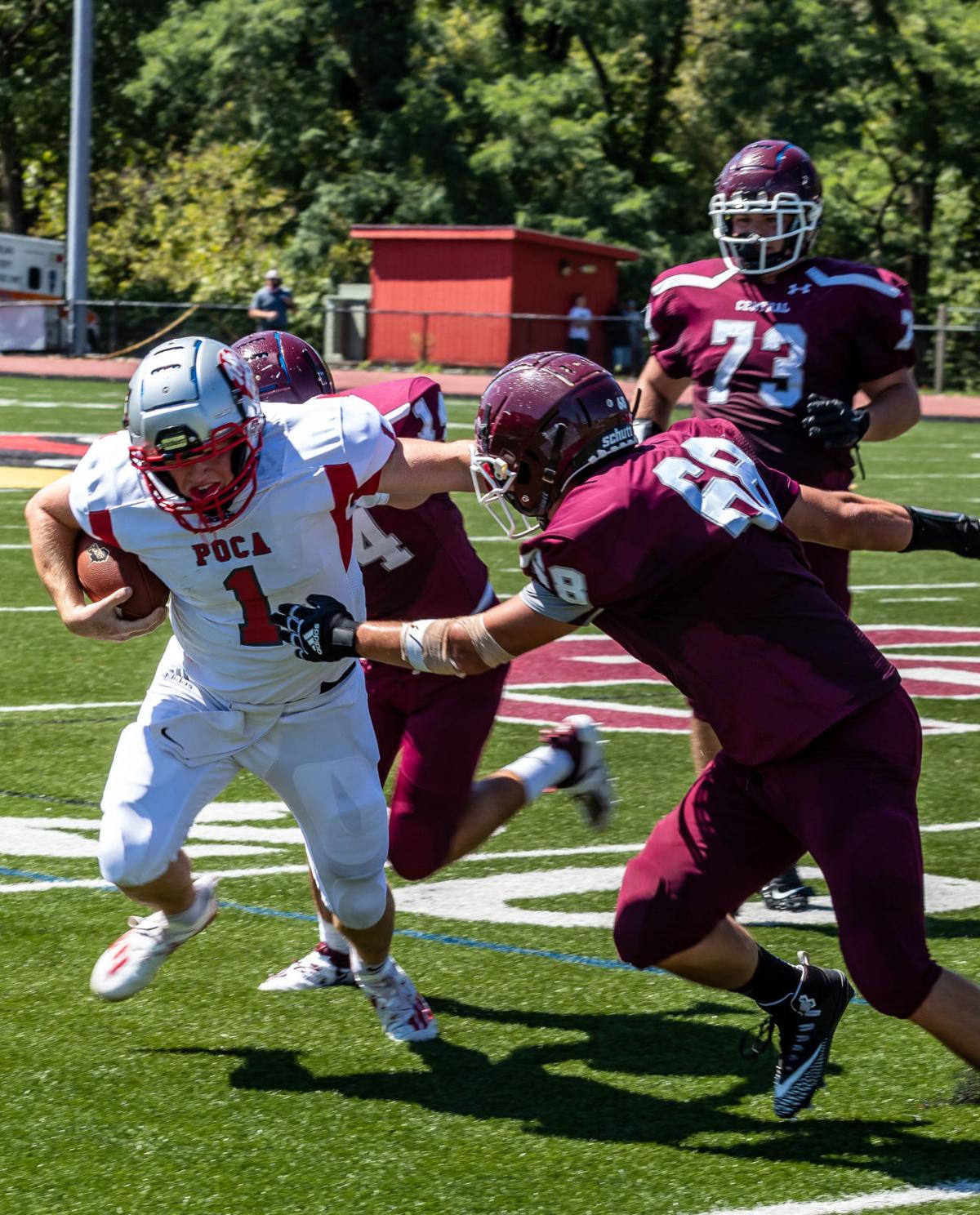 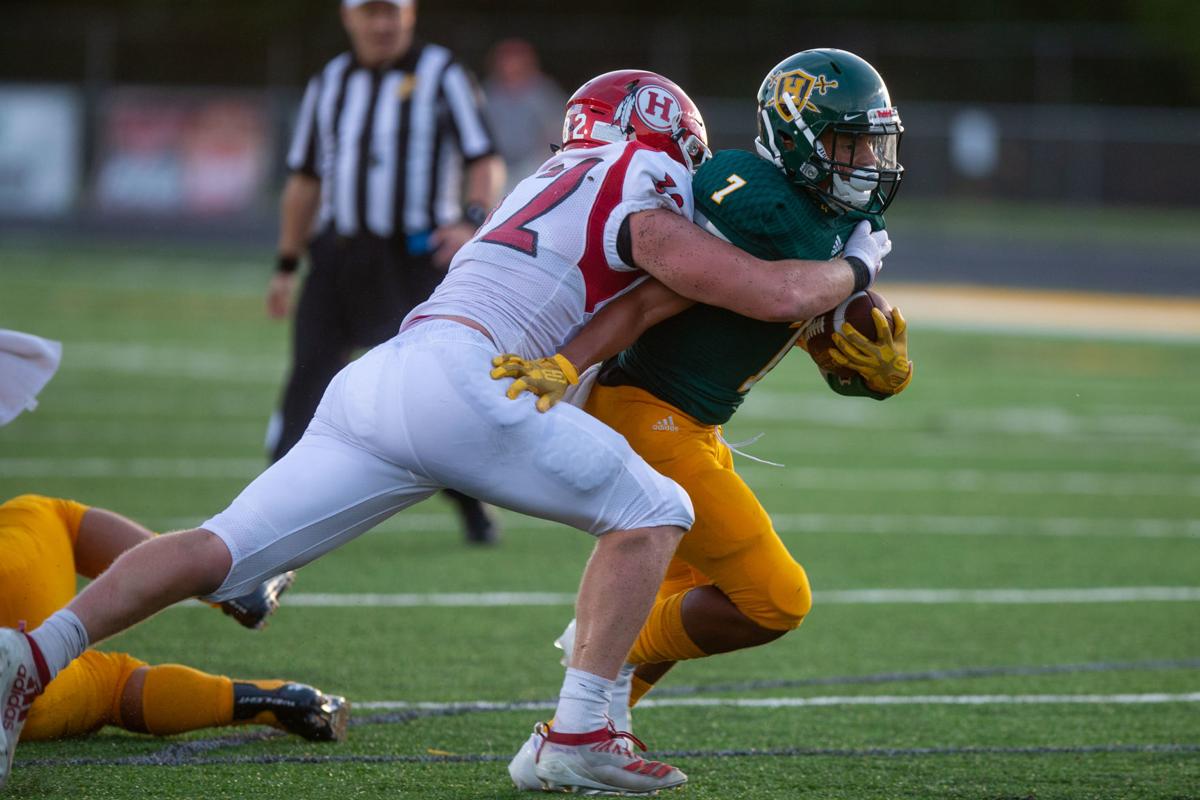 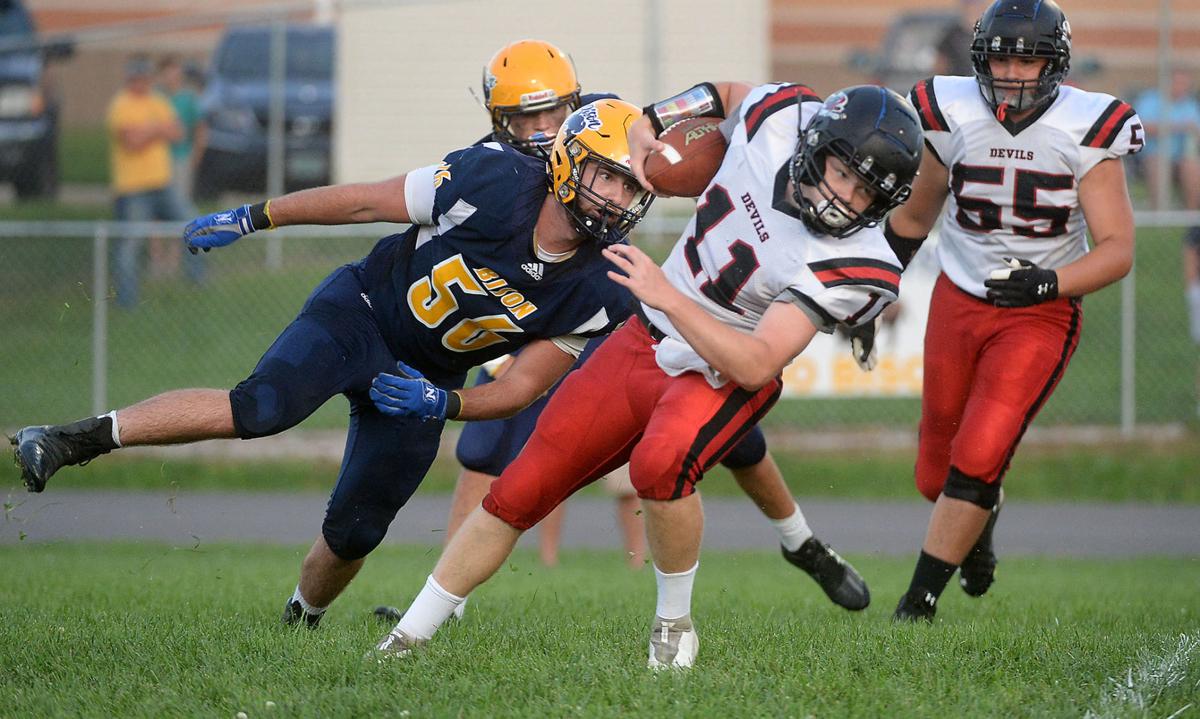 Buffalo’s Park Michels (left) helps bring down Ravenswood’s Isaiah Casto in the end zone for a safety during the Bison’s 21-6 triumph.

Buffalo’s Park Michels (left) helps bring down Ravenswood’s Isaiah Casto in the end zone for a safety during the Bison’s 21-6 triumph.

It certainly was a memorable weekend for Putnam County football teams — all three that took the field won their season openers by decisive margins.

Now comes the hard part, though. They have to sit and wait to see when, or if, they can play again.

Nine counties in West Virginia are listed in either red (highest risk) or orange on the weekly COVID-19 risk factor map, including Putnam, meaning their high school teams can’t play games through Saturday night. Putnam currently stands in the orange category; its teams can practice, but not play games. A week ago, Putnam was at the yellow level, so its games went on last weekend.

Like neighboring Kanawha County (whose schools didn’t even get to play their openers last weekend because it was at the orange level), Putnam’s numbers rose several days in a row before falling from 15.94 to 15.69 Tuesday in the state’s daily COVID-19 metric that measures cases per 1,000 population on a rolling seven-day average. Counties under 10 are listed as yellow (can play games) and those over 10 are orange (can’t play games).

If Putnam’s football programs have to bow out for a while, at least they did it in style.

Poca traveled to the Northern Panhandle and captured a 34-6 victory at three-time defending Class A champion Wheeling Central on Saturday, the day after Hurricane opened with a 21-9 win at Huntington and Buffalo took down visiting Ravenswood 21-6. Winfield, the county’s other school, couldn’t play its scheduled opener at Herbert Hoover because of Kanawha’s orange status.

Dillon Taylor, Poca’s senior linebacker and leading tackler, said the uncertainty of when his team can play again has nagged at him in recent days.

“It’s taken a toll on me,’’ Taylor said. “I try to put it in the back of my mind, but regardless I’m going to be ready for when we get back out there.’’

The Dots may have more to lose than many teams that are currently sidelined around the state because they were again expected to contend for the Class AA title. Coach Seth Ramsey said he and his coaches have to walk a fine line in being honest with their team about the situation while also keeping their players motivated.

“You’ve got to make sure they continue to practice and rep things,’’ Ramsey said, “and make sure we physically stay in shape and ready to go whenever we’re yellow or whatever. We’ve got to stay after it and keep getting ready.

“We’ve got a good senior class and I think they’re hungry, they’re driven and really level-headed. Regardless of what happens with this color stuff, they’re going to do a good job keeping the guys in order and keeping them accountable. I’m really excited for what we can do this year.’’

Hurricane coach Jeremy Taylor took a light-hearted approach to being 1-0, citing Central’s Florida 2017 squad that finished as the only perfect-record team in the Football Bowl Subdivision with a 13-0 record, but was not invited to the College Football Playoff.

“If we stay undefeated,’’ Taylor said, “we’re going to pull a UCF and declare ourselves national champions — undefeated.’’

Taylor also realizes that Putnam could languish at the orange level for a while before it can play again. Still, he remains hopeful that the Redskins and other Kanawha Valley teams can resume playing games soon and try to possibly squeeze in two games in a week to catch up with their schedules.

“It’s crossed my mind,’’ Taylor said of sitting idle for a long stretch, “but we’ll keep practicing and keep watching our [COVID-19] numbers. We’re looking at a lot of options.

“I don’t know if we can play at 9:01 p.m. Saturday [after the state releases its weekly maps] or maybe the SSAC will let us play on Sunday afternoon. We’re hoping they will allow us a waiver to open up stuff when we can actually play. One day makes a big difference if you decide to play on a Monday night, and then try to play again Friday. That’s a heck of a turnaround. Sure, you can make it Saturday, but if we can do Sunday, I can handle that and we can make the sacrifices with our administration and coaches. I’ll tell everybody if you’ve got religion [issues], then you do what’s best for you and your family.’’

Buffalo coach Brian Batman said he’s had conversations with his players about their opener possibly being their lone game this season, but prefers to remain optimistic because he’s got a veteran team.

“We’ve talked about it,’’ Batman said. “We talk all the time about, ‘This might be your last play,’ and this, that and the other, but it may be the only game we play all year. Of course, I hope and we hope it’s not, but we’ve talked about it. I just wish we’d performed better than what we had, but it’s a win and we’ll take it.’’