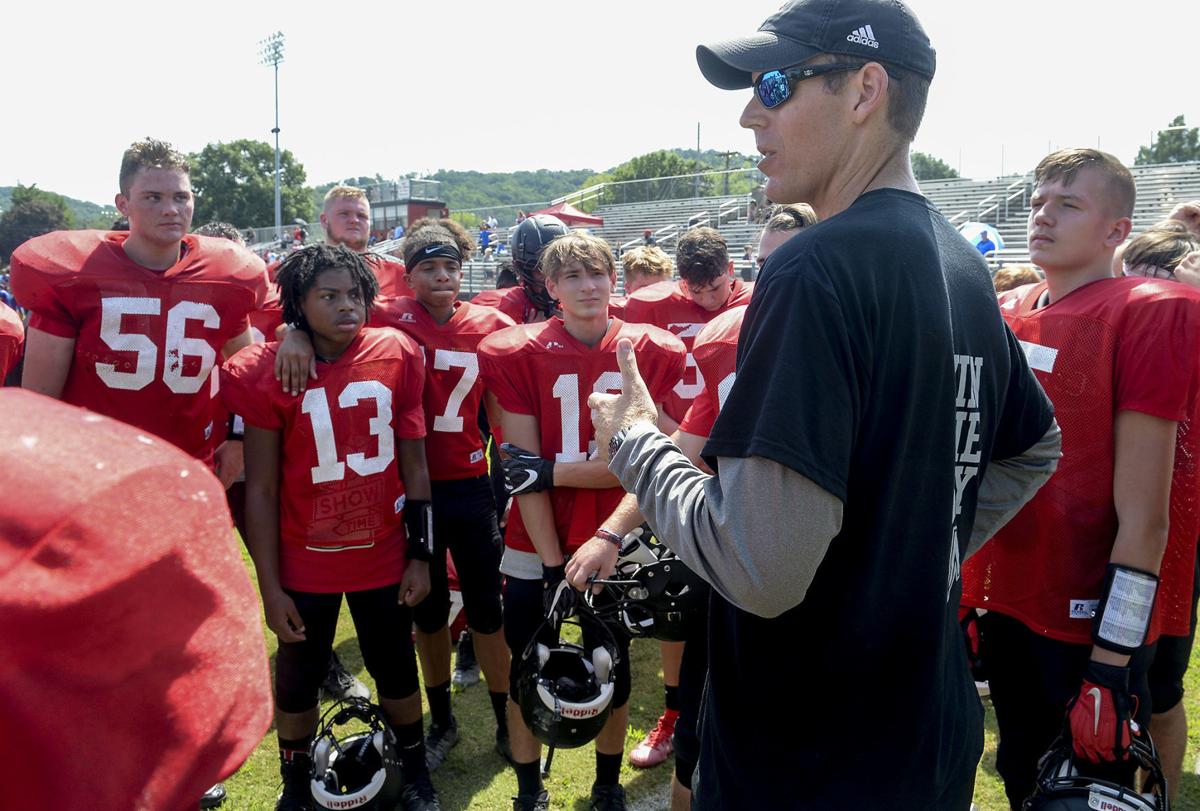 Nitro coach Zach Davis talks to his players after a scrimmage last season. 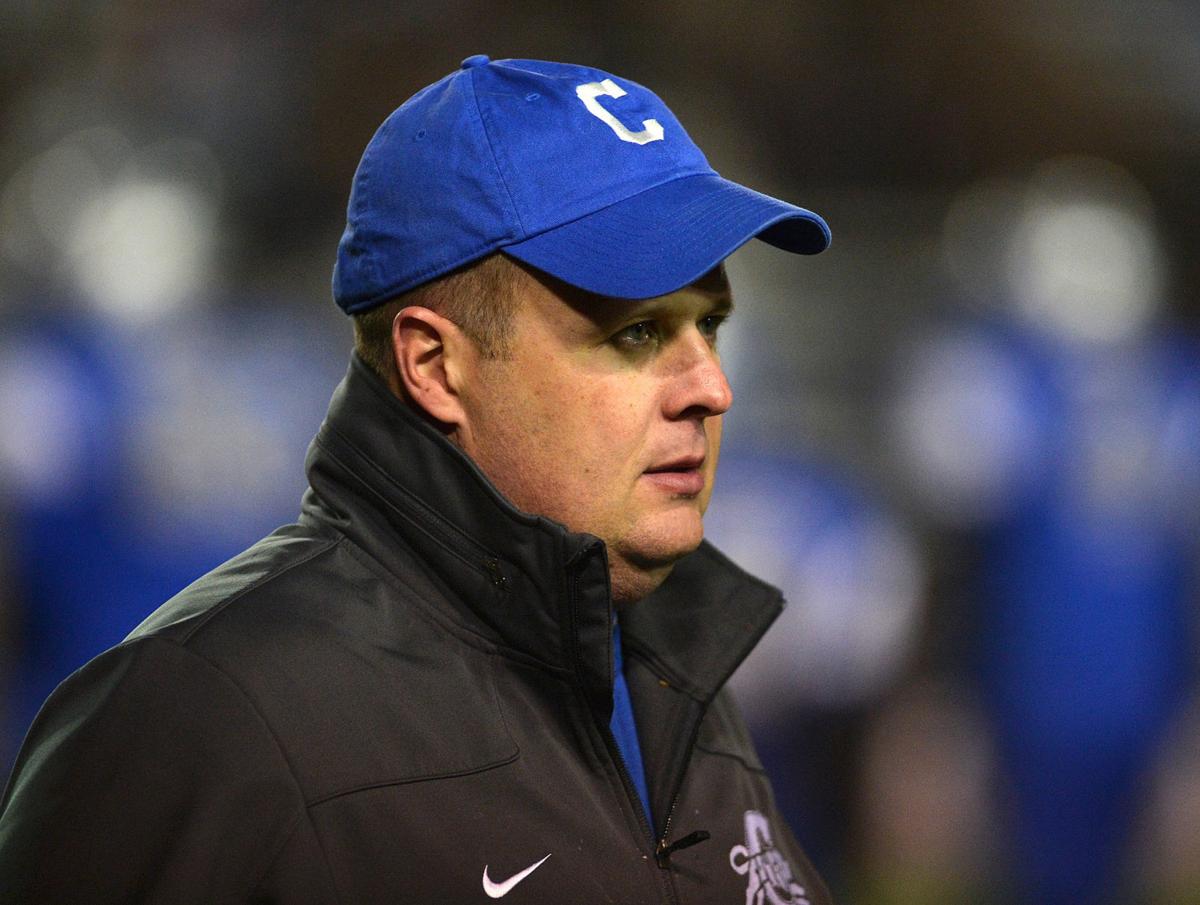 Jon Carpenter enters his 11th season as coach at Capital with an overall record of 90-33.

Nitro coach Zach Davis talks to his players after a scrimmage last season.

Jon Carpenter enters his 11th season as coach at Capital with an overall record of 90-33.

Talk to a half-dozen people about the uncertainty surrounding the coming prep football season and you could well get a half-dozen differing responses.

Even in the same county, in this case Kanawha, the viewpoints of two coaches can vary greatly. The Gazette-Mail spoke with Nitro’s Zach Davis and Capital’s Jon Carpenter to get their perspectives on how West Virginia should navigate the current coronavirus pandemic.

For example, Davis believes the wrong numbers are being stressed in daily COVID-19 updates — instead of dwelling on the number of new cases, he asks what percentage of people have recovered. And he points to the fact that since mid-March, just .1 percent of West Virginia’s population has tested positive.

Carpenter is more leery, understandable since one of his daughters has asthma, which could be complicated by the virus. Carpenter worries about players catching COVID-19 and taking it back home to their grandparents.

Davis begins his sixth season as a head coach in the Kanawha Valley and his third at Nitro following three at Riverside. He is also moderator of an Apple Podcast called “Mind of a Football Coach.’’ Carpenter enters his 11th season at Capital. Their responses came from a recent question-and-answer session.

GM: Are you optimistic or pessimistic about the coming season, and why?

Davis: I think that we definitely should follow the data, follow the information, and see where that takes us. How is COVID affecting different age groups in West Virginia, and make decisions based on what’s good for our kids and, obviously, coaches as well, and go from there. I think data has to drive every decision we make, and not what happens nationally, because West Virginia’s a fairly secluded place, and make decisions based on what’s best for players and coaches.

I can understand other views. We don’t want anybody to die, but at some point we have to resume normalcy. Every day people die, and the reasons are terrible. They die from cancer. We have to move forward. Hopefully, we’ll have a vaccine, and we’ll do our best with the available knowledge we have to try and have a sense of normalcy and a sense of community engagement.’’

Carpenter: I’d be shocked, but I hope we do. Like everybody, I hope and pray we do. I don’t know what to think. I guess all I know is from whoever I bump into at the gas station. Maybe I don’t want to know anything, because it seems like you can find out whatever you want to [in the statistics], however you spin it. But it can scare you.

GM: What are you biggest worries about what could happen when the season starts?

Davis: I think everybody’s big fear is that somebody gets really sick or dies, and that would be horrible and terrible and something we have to be cognizant of. The one thing about COVID — if you can call it a good thing — is that it does not seem to affect [people] 18 and under really at all, most cases are asymptomatic. Coaches may be a different story. Maybe coaches wear face masks, maybe we coach from a distance. It’s different, but this is a different time in history.

Along with the concerns that we’ll all be healthy is something related: Are the players in good enough shape to play football? Is there enough practice time to play games? What the [Secondary School Activities Commission] has set forth in my time here is a week of practice, then a week to scrimmage and I think it’s a good thing. You want to make sure they’re in shape to play football and take the precautions necessary to keep vulnerable people healthy.

At some point, you have to reopen society to get to normal in some way, especially for teenagers. I know for a lot of kids, their reason to come to school is to play football. You take that away, and what happens to their academics, what happens to their life in general? It’s a definite balance. I can see why people have different perspectives, but I’d like to regain some normalcy for teenagers.

Carpenter: Competition-wise, we’ll be all right. We get started and do all that work, we’ll get it down. But what if a couple teams get it and only play a handful of games? My nightmare is one of our kids catching it at Laidley Field and taking it home. People say kids don’t get it, but people die from it.

I had close contact with 50 kids the other day. Then everybody goes home to different places. I’m scared of having to show up at one of my kids’ granddad’s funeral. At the same time, they [the athletes] want to play. It’s a hard, tough decision. I wish some of the older coaches were involved in the thought process. To know [directives] are being sent out with no communication [with coaches] and not having them involved scares the hell out of me.

GM: Is there anything about the season that you’re confident will go right?

Davis: It’s definitely something that’s going to be a challenge, but I think there are plenty of people in our state who are intelligent and good problem-solvers, and you can solve those problems as they come. Do what looks right, right now because nobody knows. Down the road, will they find a vaccine for COVID-19? Some people say yes, some people say no. Shut it down for a while? Herd immunity? Some of that has to come from the top from government and work its way down, and be flexible.

At our conditioning sessions, we’ve had about 20 kids show up running sprints with no footballs around, and those kids were ready to go. They needed something to do. We’re social distancing and not using any equipment. Teenagers need their time planned out for them or they’re going to find trouble.

Carpenter: Well, nothing about being involved in the thought process. I’m telling you, I’m amazed how little communication we’ve gotten and to think we’ve got health experts around to help us. Even the water situation — you’ve got to bring your own bottles. Hand sanitizer wasn’t provided, everything we got [as far as supplies], I had to trade for with folks I went to school with.

“If you’re the coach and that doesn’t scare the hell out of you, you’re not smart enough to coach football. This is the third straight year we’ve had an important safety situation. The last two years, it wasn’t enough practice.

GM: What do you think are the chances that hot spots will flare up around the state and have to be shut down?

What does it look like right now? Nobody knows. Nobody has a concrete idea. Take it as it comes and work with it as it comes. It’s a unique time in history, and attack it as safely as possible.

Carpenter: I hate to think there’s some of those schools are going have some guys selling playoff shirts when some of the better teams get shut down, because it’s better for them. Go 4-6 and get in the playoffs and that creates a whole other disgusting situation.

GM: How do you think your preparations will go the next two months with so much uncertainty? How will it play out?

Davis: You’ve hit the nail on the head. Every coach I talk to, it comes down to what you can install right now offensively and defensively, and it has to be simple because you’ll not have as much time with the kids. You can’t make contact and when you’re allowed to do that, be careful with how you do it, following the progressions the SSAC has set out.

The way we condition our kids in pods, they run sprints and get really tired because they haven’t done anything strenuous in three, four months, and when it comes down to it, blocking and tackling are violent things. You have to ease into that. [Calling off] scrimmages, moving the season back? I think that’s all on the table. Hopefully, it goes away or we find a vaccine. At this time in history, you have to be flexible and try new things you haven’t tried before.

Carpenter: It changes every time you sit down and think about it. You hear all these different people talk and you don’t even know when you’re starting school. When you’re a coach, you’re like a sergeant in the Army. You have a lot of guys you’ve got to lead into battle and you hear rumors about where you going, but you’re not sure how you get there or what weapons you have. No plans other than supplies that nobody’s offered you during the phases [of the SSAC comeback plan for prep sports], stuff you’ve got to go with that you don’t have. So many things that you can’t think of them all. Everybody asks you: “What are you gonna do in August?” Hell, I don’t know. Stay alive?

GM: What suggestions would you make to get looked at or discussed?

Davis: Definitely, we may play an abbreviated season. I hear eight games thrown out there. Or only playing teams within your county, or counties that your county touches. Those are some ideas I’ve heard thrown around. I think these are all good.

There are times where you have to think outside the box, and I think this also comes down to college football, and it seems like they’re going to play. Some of these kids hope to play at the next level and we have to do as good a job as we can to play some form of season so they can be recruited and play college football. This is eventually going to go away, and we need to help these kids get their chance to play.

I really think that people are looking for answers, and I think people really want to play football. It’s such an event for communities and it brings people together. Obviously, it’s fun for kids to play and coaches to coach and bands to play — but it’s so much more than that. People come together and have shared experiences. We need to do everything possible to have football in communities in West Virginia in the fall.

Carpenter: I wish they would talk to people like Steve Edwards [Jr., George Washington’s coach]. He’s been around this county. He knows. I wish they’d have an open conversation with people to talk about what we’re doing. To me right now, it all seems political.

I’m scared to death. I feel like we’re being led someplace, and there’s no leadership, no plan. I wish they’d talk to some people and communicate. I wish they’d tell us something other than sending out an email.