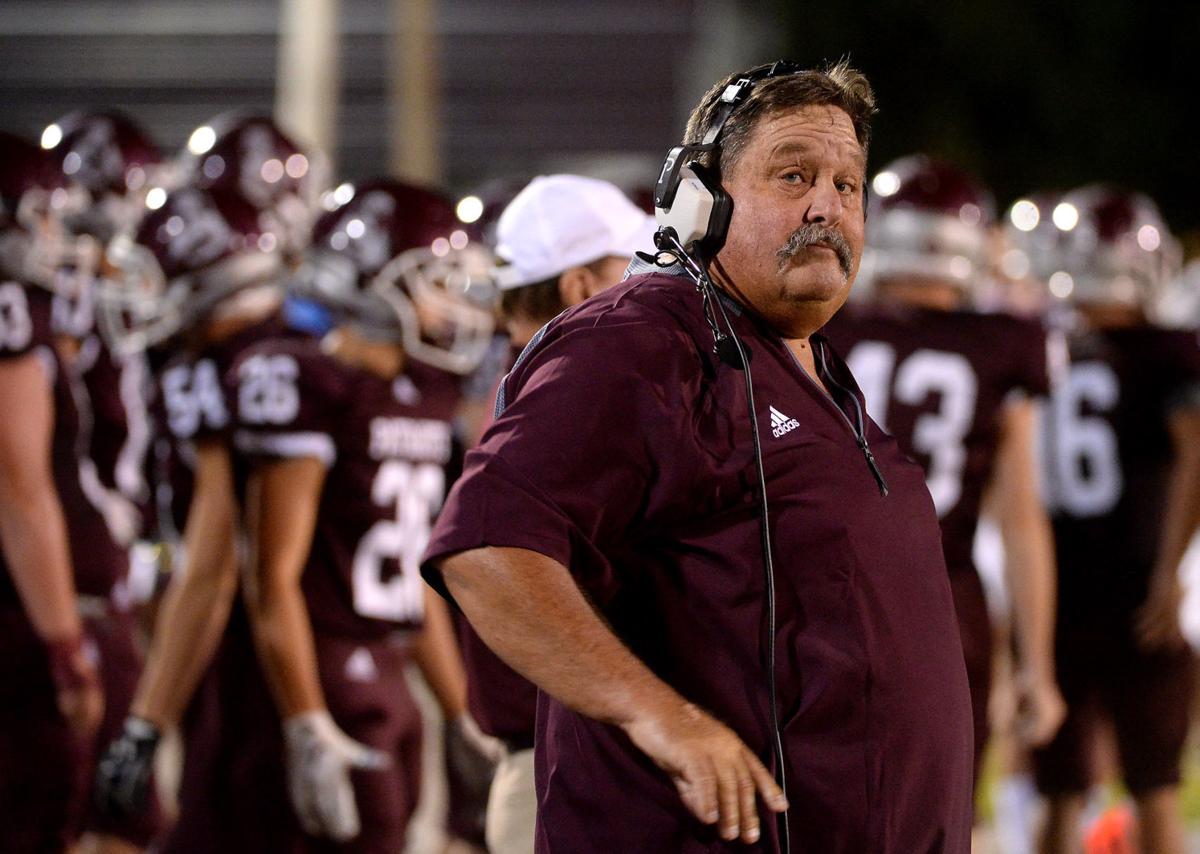 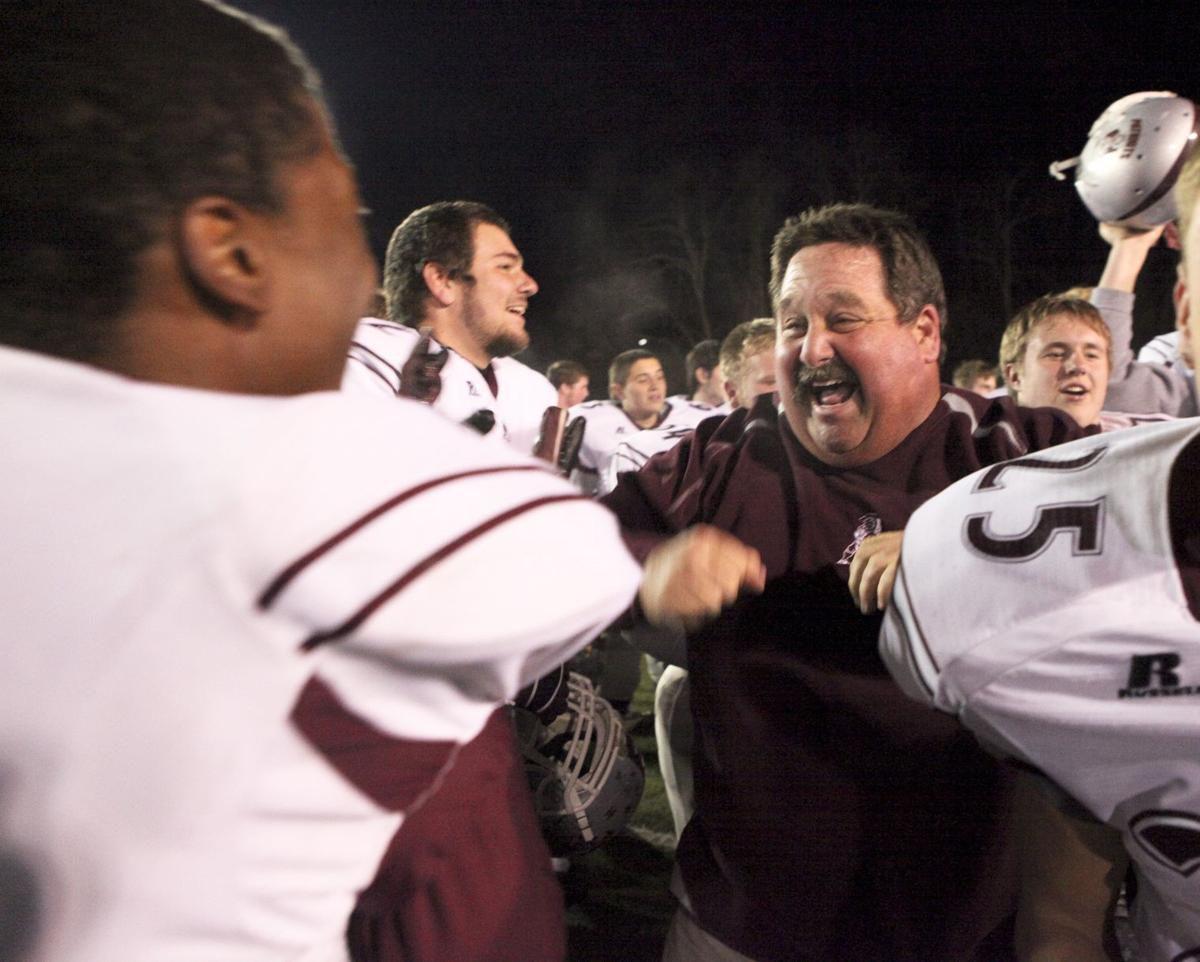 GW coach Steve Edwards Jr. celebrates with his players following a 21-14 playoff semifinal win at Bridgeport in 2011 that put the Patriots into the AAA finals.

GW coach Steve Edwards Jr. celebrates with his players following a 21-14 playoff semifinal win at Bridgeport in 2011 that put the Patriots into the AAA finals.

Normally, when you’ve been at something for 25 years, lots can go wrong. You can get burnt out, people you work with lose interest, personalities clash or the style grows stale.

But that’s certainly not the way it’s turned out for Steve Edwards Jr., who begins his 25th season as George Washington’s football coach, sporting as much enthusiasm and energy as someone half his age. GW, like most schools around the state, started its three-week summer practice period on Monday.

So how has Edwards done it — surviving in what has largely become a young man’s game in the coaching ranks?

“To be mentioned in the company of those guys [Simon, Kelley and Wilson], that’s a pretty classy organization. Those top three dudes are gold, in my opinion. I’ve been able to keep guys together on my staff who have stayed together a long time — they’ve been there 16, 18, 19 years. That’s a long time. I’m proud of that, and I think they are, too.’’

One of Edwards’ longest-tenured assistants, Jason Smith, begins his 20th straight season at GW. Smith has a ready answer for why the Patriots’ assistants tend to stick around.

“He keeps most of his coaches, and they stay a long time because of him. He’s always been good to me, and that’s why I haven’t left. He lets me coach, and he has to take the phone calls.’’

Edwards said that time has “kind of flown by’’ since he took over as GW coach in the fall of 1996, but admits that the game itself has changed a good deal in that period.

“I remember my first game,’’ he said of the 1996 opener at Point Pleasant, “when we went into the game with two defenses — a 5-2 and a 6-5. They were running the wing-T against me and we couldn’t do anything with the 5-2, so I played a 6-5 goal-line defense all over the daggone field — I don’t care if it was third-and-30 or third-and-inches. I had to do something.

“But it has changed. Teams are running from multiple formations and running multiple defenses, too. And coaching is getting great. Coaches in our league [the Mountain State Athletic Conference] and coaching everywhere keeps getting better and better. Everybody seems to get smarter and smarter. It keeps me hopping and keeps me working, and that’s good, too.

“It used to be a lot of run-oriented [offenses] and everybody played a 5-2 defense and cover-3. Now, they’re playing man and halves and corners — it’s just changed a ton. Offensive backs are all over the place. Before, everybody lined up in a phone booth and it was, ‘Red Rover, we’re coming over. If you’ve got big guys, you’ll slow us down.’ It’s really changed a lot. I’ve been fortunate enough to learn as I keep going along, be part of all the phases.’’

Smith compared Edwards’ development as a coach to that of his father, Steve Edwards Sr., who guided GW to its lone Class AAA state championship in 1982 and whose name now adorns the football field on the school’s campus.

“He’s been kind of like his dad was,’’ Smith said of Edwards Jr. “He didn’t stay the same. He kind of molded to what we had. There have been years where we ran the ball 80% of the time and years where we passed the ball 80% of the time. He’s adapted to his personnel real good, and he’s changed with the times. We used to use a 5-2 defense when I got here, then we went to a four [-man front], we played a 3-3 stack and now it’s a more even four front. He always changes to what he thinks his personnel can do.’’

Edwards Jr. has compiled some nifty numbers in his near-quarter century on the job, as 17 of his first 24 teams have reached the playoffs and only five of his teams have posted losing records. Twice he’s taken the Patriots to the Super Six state finals in Wheeling, in 2008 (losing to South Charleston 39-8) and 2011 (losing to Martinsburg 35-27).

With Kennedy Award-winning running back Ryan Switzer leading the charge, that latter Patriots Super Six team posted a program record-tying 13 wins, matching the total from GW’s 1982 title team coached by his father, who remained on his staff as an assistant from 1996-2014. Steve Edwards Sr. died in 2017.

Edwards Jr. has climbed into the No. 3 spot in all-time coaching wins in Kanawha County with a record of 170-102, putting him six behind Ralph Hensley (East Bank, Riverside) and 11 back of Dick Whitman (DuPont, Riverside).

“Incredible. It’s great company,’’ Edwards said. “I feel blessed and fortunate to be in a list like that. Ralph gave me my first high school job. What a great coach and great runs he had, a great guy. And Coach Whitman, you’ll not find a better guy than he was. If I learned anything from those guys other than X’s and O’s, I learned that good guys don’t always finish last. They take care of you, they’re good people and they were able to give a guy a helping hand.’’

Edwards has been around the block in coaching parlance, serving as a graduate assistant at West Virginia University and as an assistant coach at both Glenville State and West Virginia Tech, as well as at the high school level in North Carolina and Virginia. He also knows the sport first-hand, having played linebacker and tight end at GW, finishing second in the county in touchdown receptions during his senior season (1979).

So as he closes in on a coaching milestone, how much longer does Edwards see himself patrolling the sideline? After all, the days of the veteran career coach are few and far between — recently, Larry McClintic spent 47 seasons as head coach at Meadow Bridge (1969-2015) and Denny Price put up 40 seasons at Musselman (1973-2012).

“As long as I feel like I’m contributing,’’ Edwards said, “and I feel we’re relevant, and we stay together as a staff. The kids are still enjoying it. I think you always kind of know. My dad always told me, ‘You’ll know when it’s time to go,’ and I hope I can leave it like I wanted to leave it. I told [former GW Principal] Larry Lohan when he hired me all those years ago, ‘You won’t have to ask me to leave.’

“I think I’ll know when it comes and I’ll fade out of there and let somebody else do it. You don’t want to stay at the fair too long, but I feel good about what I’m doing and what I still have to accomplish. I love my staff, I love my kids, I love my team, I love my family. It’s a great place, the place I always wanted to be. As long as I keep that going, I still enjoy it. I don’t always make everybody happy, but then I wouldn’t be doing my job if I did.’’

Edwards shouldn’t have to worry about leaving the program in better shape than he found it.

When he took over in 1996, the Patriots had gone just 8-42 in the previous five seasons, which included a 24-game losing streak that finally ended in 1995. GW has advanced to the postseason four times in the last five years, including an 8-4 mark in 2019 that included 10 games against playoff teams and a perfect 7-0 record at home. The Patriots have played exclusively at their South Hills field since 2010 and own a record of 51-17 there all-time, and are 7-1 in playoff games.

“I’ve seen a lot of change at GW,’’ he said, “and made some of my dreams and my family’s dreams come true — the stadium named after my father, and playing games at GW when nobody thought we could. That place before was terrible, awful and to bring something there that the community and our school and our kids can enjoy for many, many years ... I just wish we could have played there earlier. We made a lot of great changes and built some things that are going to last a lot longer than me.

“And to be here with the turf finally going in, it’s going to change the whole face at the top of that hill, and it’s going to look really beautiful. I hope we get the chance to do it. It will be emotional for me to open up on that new turf and new surroundings. It’ll be special for a lot of people. It was my goal, anyway, to make it nice for everybody.’’

Smith said Edwards’ approach has rubbed off on GW’s players, too.

“He listens to the kids,’’ Smith said. “He’s real big about letting the kids pick those four, five captains every year. And I’ve seen many times when those kids come to him with stuff that he really likes. Sometimes they come to him with stuff he doesn’t like, but he always listens to them. It is their team, and he’s always done that. His dad did that. People think he’s iron-fisted with stuff, but kids come off the field [with suggestions] and he will listen to them. We all listen to them. He’s got control of them, but he’s not a general to them.

In musing about his career so far, Edwards wouldn’t change much. He would still very much like to hoist a championship trophy sometime, but can cope with it if he doesn’t.

“I’ve accomplished a lot of goals,’’ he said. “I haven’t brought back that big one yet. I’ve had a couple opportunities, which is fabulous. I don’t think I have to win a state championship to define myself. I sure as heck want to, but if I don’t, I’ve had a lot of good things. My dad always told me a lot of great coaches never won a state championship, and a lot of great ones never got the opportunity to be in the big game. When we have our Hall of Fame night, that’s a tremendous feeling for me. I hope I left some things better than they were.

“I’ve coached some great athletes, some great kids, coached a lot of doctors and lawyers and auto mechanics. There’s nothing better than them coming back. I never had a kid come back and say he was glad he didn’t play football, and I hope I never do. It’s always been home here, so to be able to go back home and be able to bring it to my family, and have my family enjoy it, it’s been great.’’