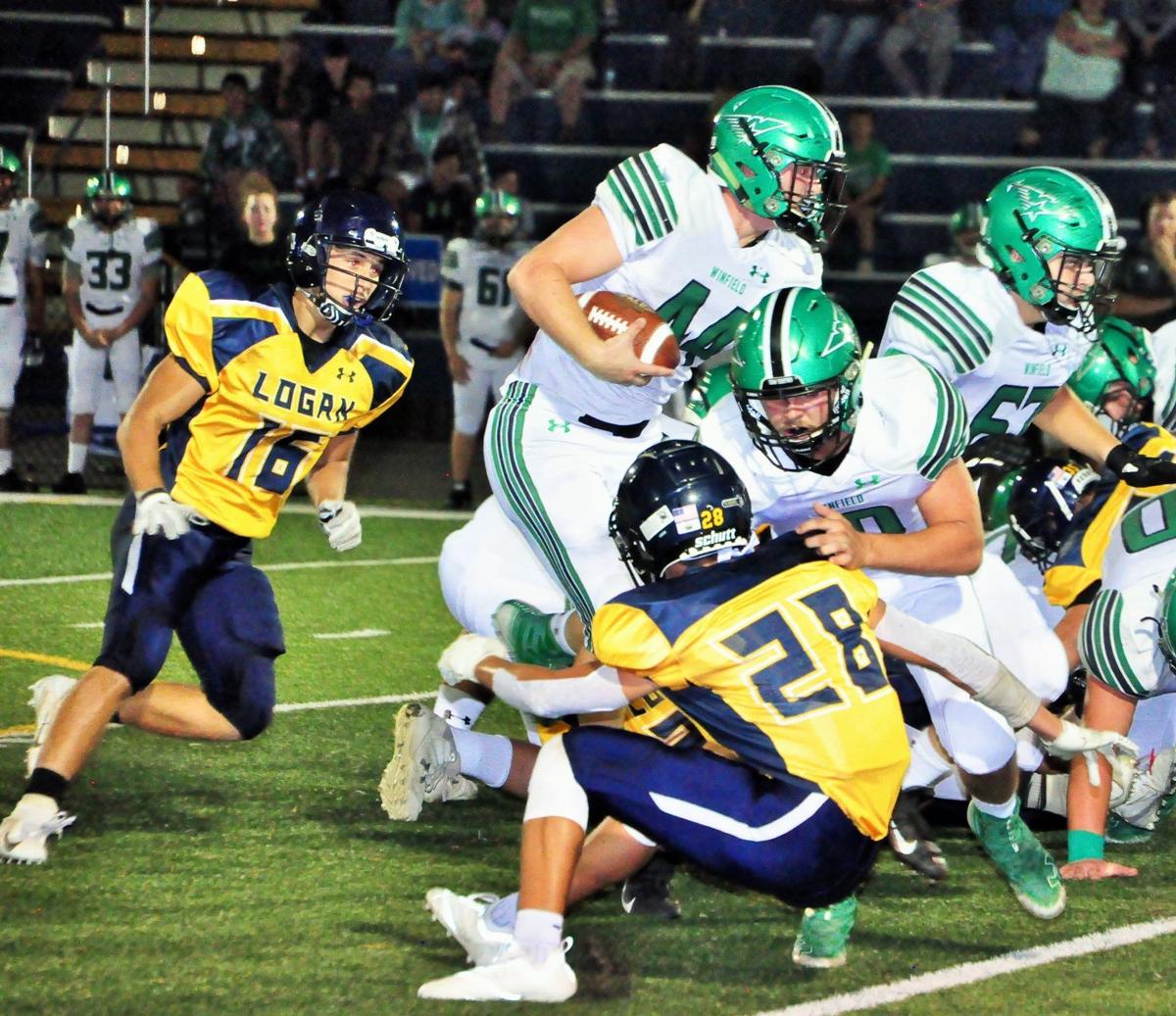 Winfield running back John Covert follows his blockers as he carries the ball against Logan last season. 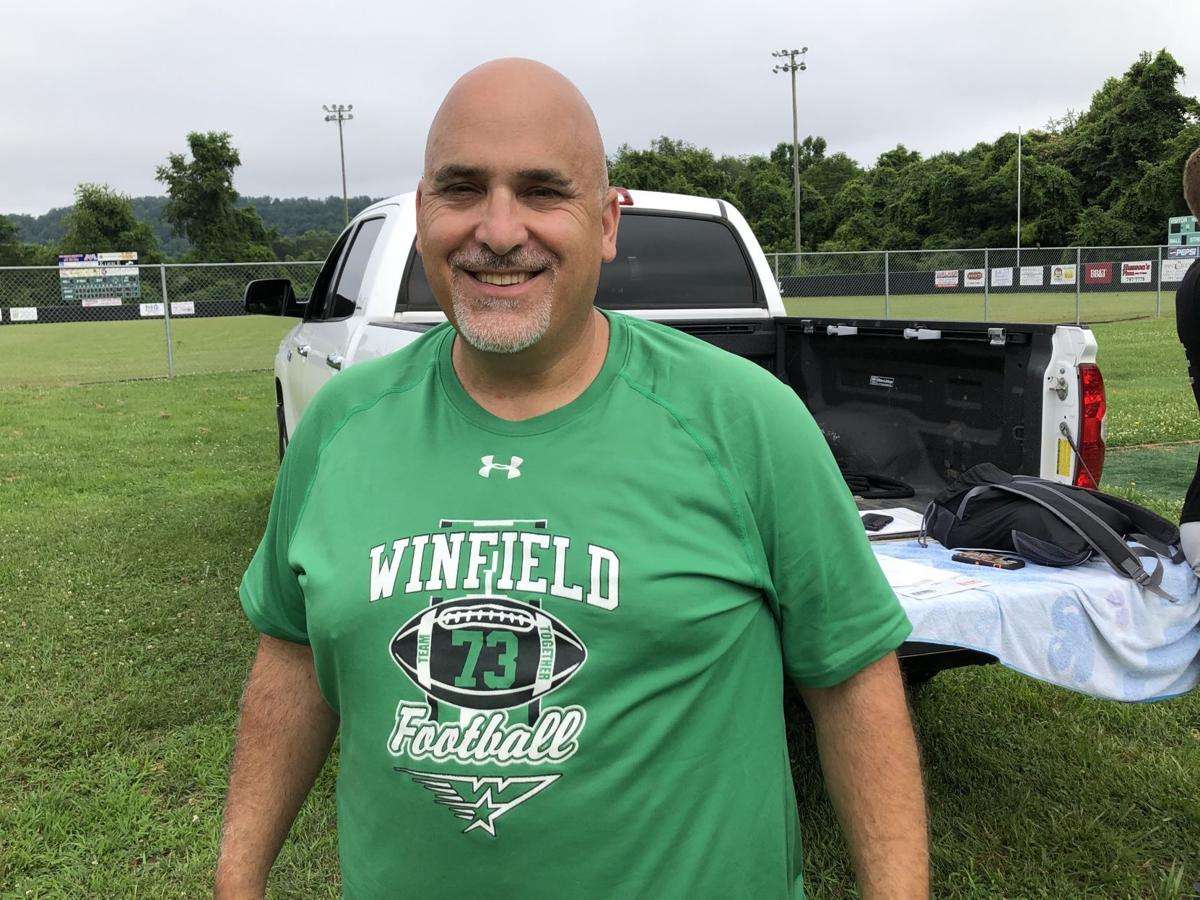 Winfield running back John Covert follows his blockers as he carries the ball against Logan last season.

Craig Snyder first came across the single-wing offense back in 2005, and the results weren’t pretty.

Snyder, then an assistant coach at Winfield on the staff of Bruce McGrew, was asked to be in charge of the scout team offense for the Generals’ Class AA first-round playoff game that season at James Monroe, which operated out of the single wing, a throwback formation that uses direct snaps to a variety of running backs, along with heavy doses of deception, fake handoffs, misdirection and spins, all meant to move the ball primarily on the ground.

“We put that videotape in,’’ Snyder recently recalled, “and I was like, ‘Oh my gosh, how am I going to do this?’ But it’s the advantage.’’

It certainly was that night for the Mavericks, who rolled up 517 rushing yards with 10 different ball-carriers during their 61-7 conquest of Winfield.

Fast forward to 2013 and Snyder’s now the head coach at Winfield with a problem concerning talented split end Chris Turner. Opponents were double-teaming Turner “and we could never throw him the ball,’’ Snyder said.

But then Snyder recalled that otherwise forgettable night at Lindside trying to slow down James Monroe’s single wing, and it dawned on him. He could use something like that to get the ball to Turner, especially in the red zone. So Snyder came up with what he called the Ram offense, a twist on the single wing meant more as a straight-ahead-blocking power formation — at least at the outset. It worked so well that Turner racked up 19 touchdowns that season, 14 of them running the ball.

“We started doing that for Chris Turner to get touches,’’ Snyder said, “and it just became a short-yardage thing. But then we started using it a lot in 2016, which was Andrew Huff’s junior year.’’

Huff, previously regarded as a dropback quarterback, used liberal carries out of the Ram formation to rush for 1,129 yards and 20 touchdowns that season, which brought the Generals their first playoff berth in 10 years, and Snyder knew he was onto something.

Through the years, Snyder has tinkered with the offense, even adding what he calls the Soldier formation, which is more of a true single wing, to help diversify the attack.

“When we run the Ram,’’ Snyder said, “we couldn’t really run anything off tackle or get anything outside, so then I started running the true single-wing stuff. So now we can run power out of Ram, and with a similar-type look, we can run with an unbalanced line but still run a lot of power. Then I can run a pin and pull sweep, and run a counter off that. so I can keep people more honest.’’

Snyder said he’s had some offers from outside his program to be shown “the right way’’ to run the single wing, but he’s satisfied to just mold parts of it into his system.

“The real reason the single wing came around was truly as a misdirection offense,’’ Snyder said, “but the reason I started using it was to [help] run power, more than anything. When I use it as misdirection or by spinning my backfield, it just sets up my power stuff, and that’s all I’m ever really trying to do.

The Ram has been very good to the Generals in recent seasons, helping them collect three AA playoff berths in the last four years after they went 10 years without sniffing the postseason. Three years ago, Winfield also collected its first playoff win since 2000 when it earned a measure of revenge at James Monroe — rushing for 391 yards in a 29-0 first-round victory.

“It’s not something you see every week,’’ said Poca coach Seth Ramsey. “It’s different, and it doesn’t matter how much you try to prepare for it in one week. They’ve done a great job of running it, and they’re so crisp in what they do. We’ve gotten to where we spend some time on it going over things, whether it’s two, three days in the preseason or whatever, because you know you’re going to see it in the middle of the year. That way you’re not just taking a couple days preparing for it because it’s completely different.’’

The more he works with the full-speed-ahead Ram formation, Snyder said he spends as much time with simple execution as he does strategy.

“You can blitz it from anywhere, tackle to tackle,’’ he said, “but for us, it just becomes a down block and there are no gaps. What people try to do is come off the edge and sometimes, some people can run it down from the back side. South Charleston was the first one that did that, and they did it with Derrek Pitts. And Owen Tillis was great at that when we played Buffalo.

“So then we had to break the rules and we just told our tight end, ‘You’ve got to block to block him,’ because that opens windows inside. When people come off the edge, we just try to kick that out. We do some things with our tackles and change up a couple of blocking rules, but it’s really very, very simple.

“That’s what I like about it,’’ Snyder said. “We just keep doing it and adding a little wrinkle here and there to just get us to the edge or get us off tackle, and there’s just so much you can do with it.’’

Snyder appreciates that the Ram system can often give his team an advantage because future opponents have a hard time preparing for the look in just a week — much like facing that James Monroe team back in 2005, or playing against Herbert Hoover’s veer attack when Tim Meyer coached the Huskies from 2009 to 2019.

“I guarantee you that whether we’re good or not,’’ Snyder said, “I think that people from a preparation standpoint — every time they see us — it’s a bit of a headache.

“That’s the same reason why I think Tim was so great at Hoover coaching the way they ran the veer. You think it’s so simple, but nobody runs it like that. When you play them, you think the game plan’s easy and this is how we stop it, but they bake their kids into that. It’s simple option football, but he’s really good at coaching it.’’