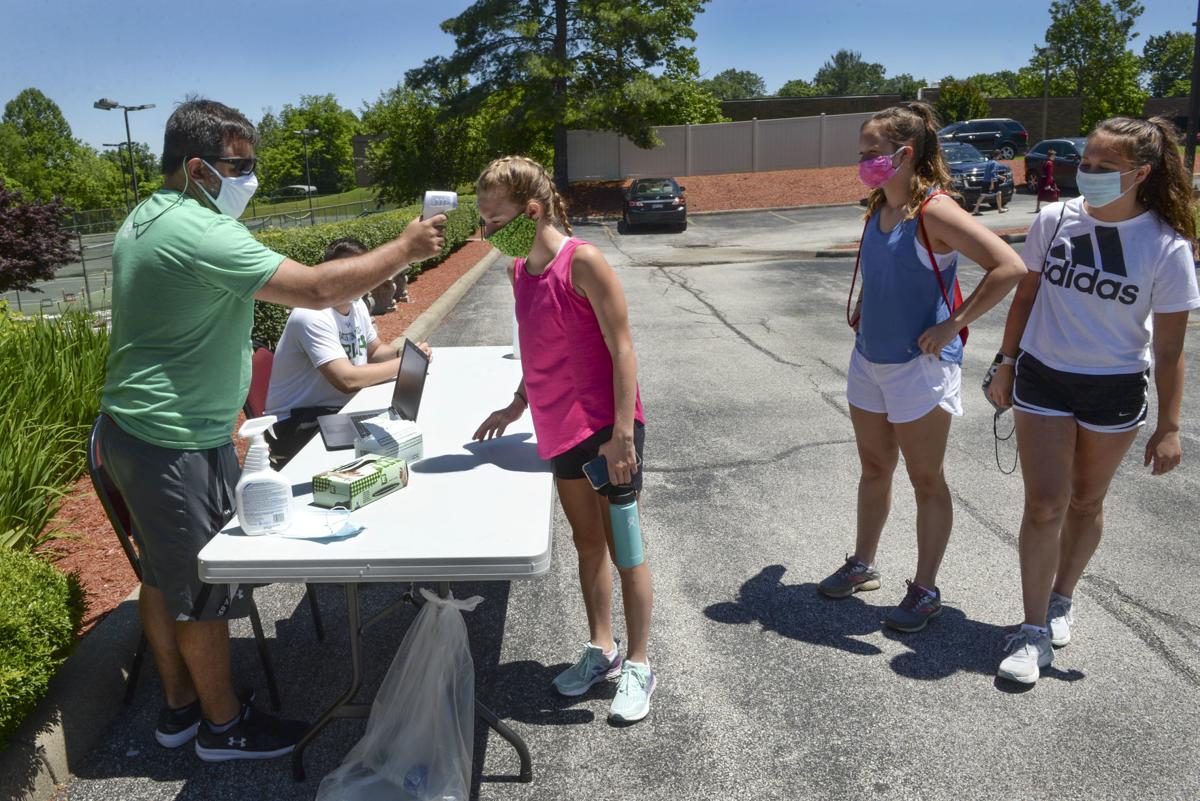 Charleston Catholic’s facilities director John Baird takes the temperature of freshman Roxy Winter while freshmen Avery Persinger (left) and Olivia Persinger wait their turn Monday before their first workout since the beginning of the pandemic. 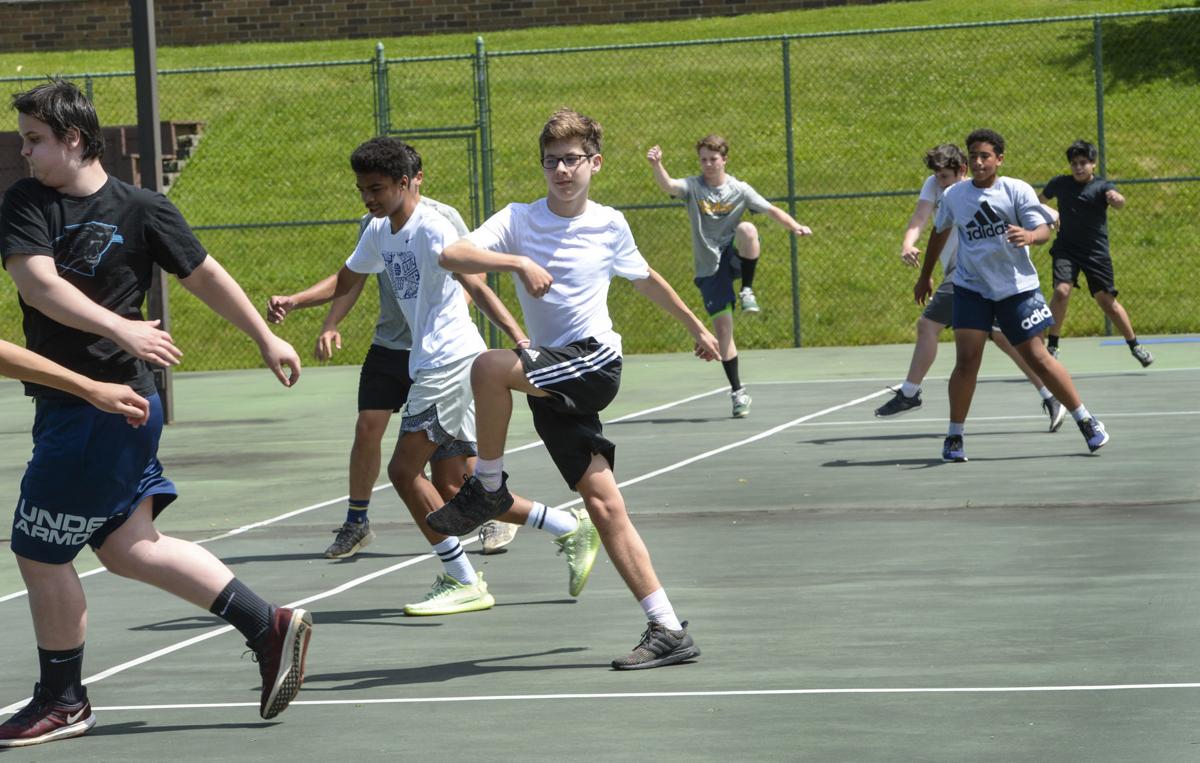 Charleston Catholic freshmen stretch before their first day of workouts Monday at Catholic’s facility off Hillcrest Dr. in Charleston. 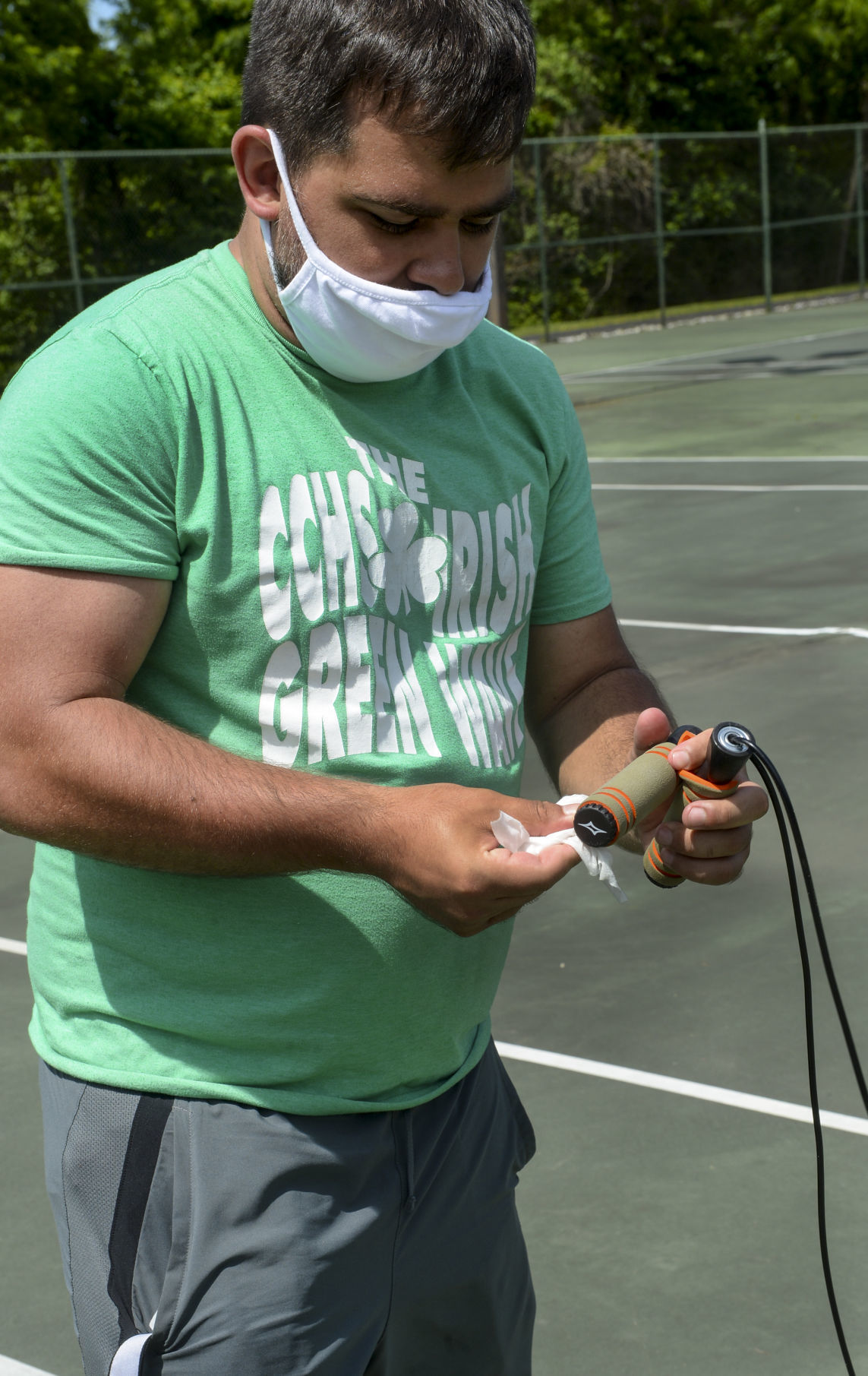 Charleston Catholic athletic director Jacob Nelson wipes down the handles of a jump rope after use by the students on Monday during workouts.

Charleston Catholic’s facilities director John Baird takes the temperature of freshman Roxy Winter while freshmen Avery Persinger (left) and Olivia Persinger wait their turn Monday before their first workout since the beginning of the pandemic.

Charleston Catholic freshmen stretch before their first day of workouts Monday at Catholic’s facility off Hillcrest Dr. in Charleston.

Charleston Catholic athletic director Jacob Nelson wipes down the handles of a jump rope after use by the students on Monday during workouts.

While the Kanawha County Board of Education is slated to meet on Wednesday to determine whether its public schools will be permitted to begin workouts under the West Virginia Secondary School Activities Commission’s plan, one local school was already back to work Monday.

Charleston Catholic began its conditioning program in accordance to phase one of the WVSSAC’s plan with 45-minute windows and groups of 10 or fewer student athletes meeting throughout the day.

The day started at 9 a.m. and ran throughout Monday with each segment consisting mostly of stretching, light agility work and some jogging at the Charleston Catholic Athletic Facility. Athletic director Jacob Nelson and strength and conditioning/assistant baseball coach John Baird are coordinating the workouts with high school athletes meeting Monday, Wednesday and Friday and middle school students scheduled to come in on Tuesday and Thursday.

Protocol from the WVSSAC’s guidelines were followed heavily with everyone in attendance wearing masks except for the athletes involved in aerobic activity. Hand sanitizer was also of mandatory use upon signing in.

The first day was light on strain but monumental in terms of returning to some sort of sense of normalcy and all in attendance agreed that it was a great feeling to be back in some capacity.

“It feels great, we’re excited about it,” Nelson said. “I think everyone involved is excited to get back to some sort of normal.”

Nelson said the response has been tremendous with full groups of 10 filling most time slots already. Early Monday morning, those groups were made up of mostly boys soccer players with coach Niall Paul looking on.

“For me it’s more a matter of their mental health than physical health,” Paul said. “They haven’t been together so just to get them out and about seems good for them. Good for the team, but better for them.”

In terms of the program itself, Baird said it was a joint effort between he and Nelson and though Monday’s workouts were light, the plan is to ramp up the routine in the days and weeks to come.

“We think it’s really important to ease them back in through the phases, just to kind of prevent injury,” Baird said. “For the social aspect and mental aspect of it as well, we want to get them out and get them sweating a little bit.

“We just wanted to number one, get their heart rate up and then we wanted to work on balance and coordination, aerobic and anaerobic coordination as well. But it would be beneficial if they were just out here stretching. A lot of them have been playing a lot of video games so just to get them out here and get them moving, it’s going to be beneficial for them.”

Baird added that at least at first, workouts will be the same no matter what sport athletes in a particular group play.

And while Nelson, Paul and Baird stressed the importance of returning to normalcy and getting their players out of the house, those sentiments were echoed by the athletes themselves. William Ball is a returning sophomore and will likely start at the center back position of the Irish’s defense this fall. For Ball, putting down the XBOX controller in exchange for his running shoes was just fine with him.

“It feels really nice,” Ball said. “It’s been boring — XBOX, sleep and working out mostly. It’s nice to feel like one team again.”