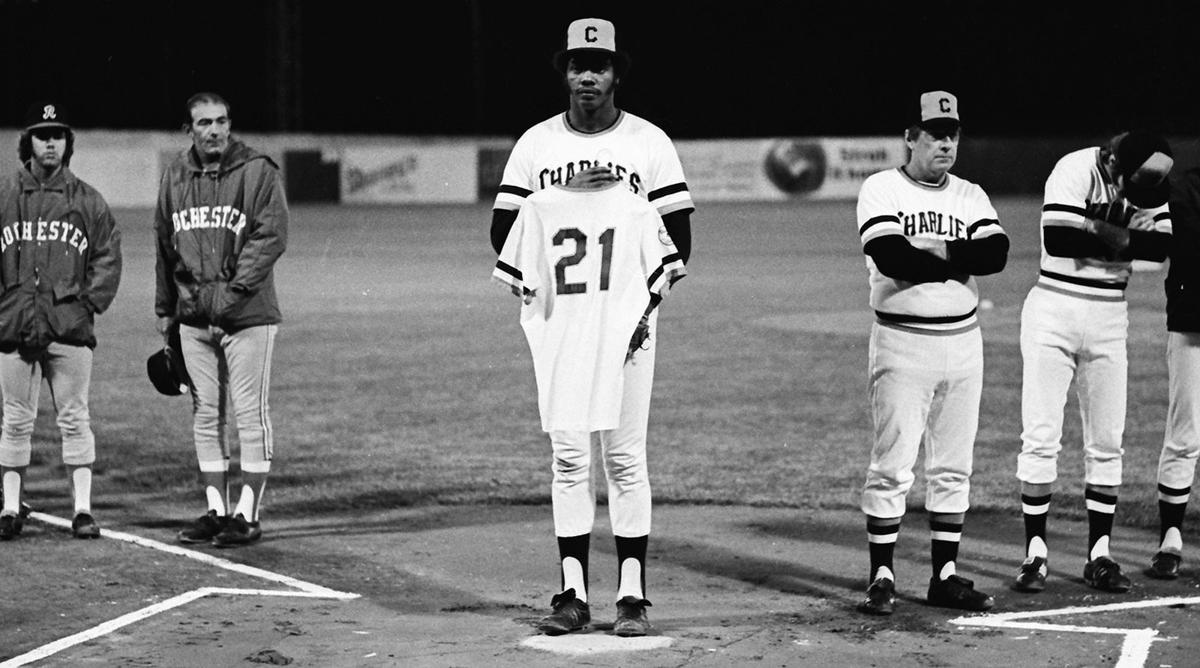 Dave Parker in April 13, 1973, Charleston Charlies home opener at Watt Powell Park during a pregame ceremony retiring Roberto Clemente’s number. Clemente had died along with three others just a few months earlier on Dec. 31, 1972, off the coast of Puerto Rico when a plane carrying emergency supplies to earthquake victims in Nicaragua crashed right after takeoff. Parker would go on to have an all-star career with the Pittsburgh Pirates, winning the NL MVP award in 1978. At left is Rochester Red Wings manager Joe Altobelli [hat off] and an unknown player. At right is Charlies manager Joe Morgan and an unknown player. 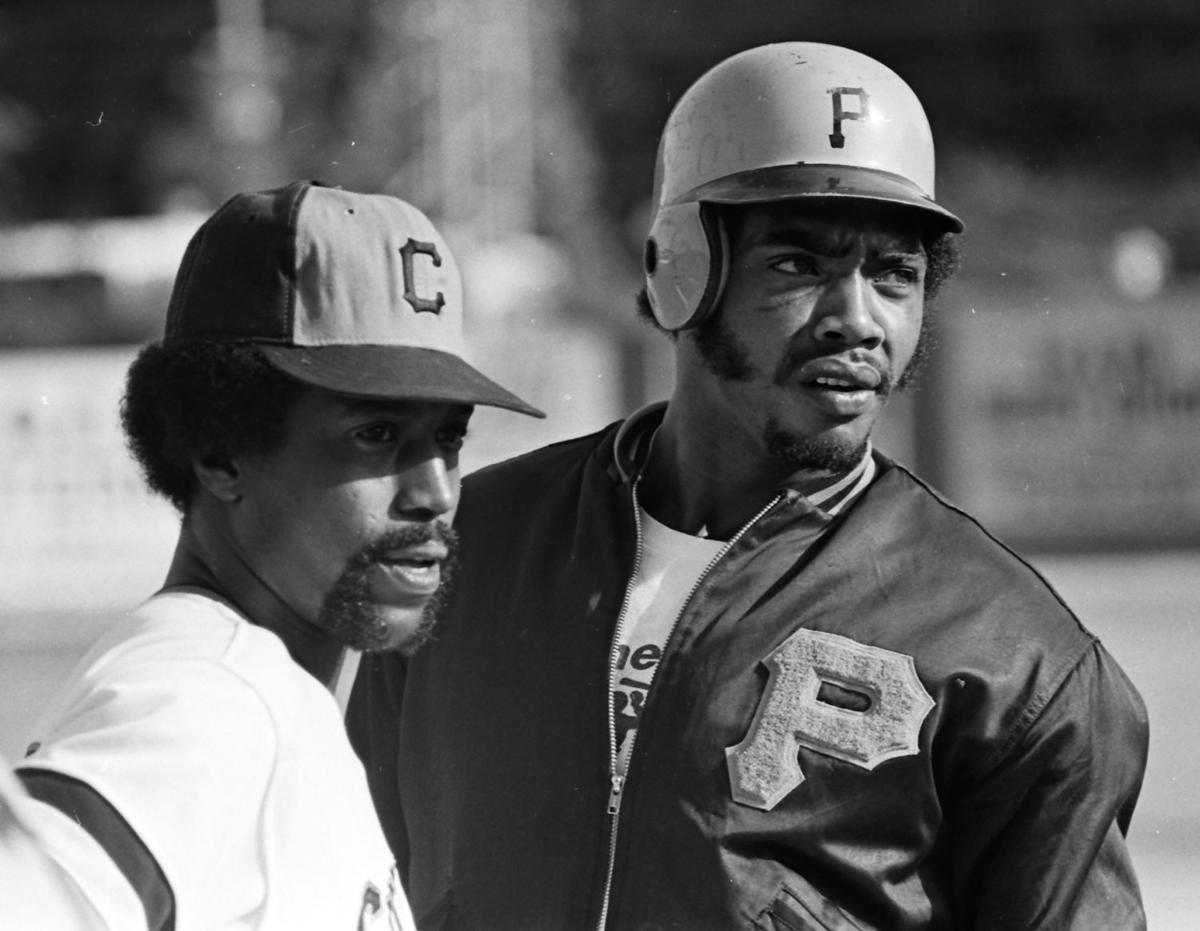 Dave Parker in April 13, 1973, Charleston Charlies home opener at Watt Powell Park during a pregame ceremony retiring Roberto Clemente’s number. Clemente had died along with three others just a few months earlier on Dec. 31, 1972, off the coast of Puerto Rico when a plane carrying emergency supplies to earthquake victims in Nicaragua crashed right after takeoff. Parker would go on to have an all-star career with the Pittsburgh Pirates, winning the NL MVP award in 1978. At left is Rochester Red Wings manager Joe Altobelli [hat off] and an unknown player. At right is Charlies manager Joe Morgan and an unknown player.

Dave Parker’s distinction as the best prospect in baseball served him nicely on that Sunday afternoon, June 24, 1973. It entitled the 22-year-old right fielder to walk through the Charleston Charlies clubhouse at Watt Powell Park, shake hands with each of his teammates and make a bold proclamation.

“I’m out of here,’’ he announced. He was either going to the major leagues, where he justifiably thought he belonged, or to his home in Cincinnati. Watching the scene unfold, Charlies center fielder Dave Augustine smiled and thought to himself, “If anybody can pull this off, he can.’’

Years later, Parker would remember the incident as a “power play’’ designed to compel the parent Pittsburgh Pirates to promote him. Youthful impatience, of course, played a role, too.

At 6-foot-5 and 225 pounds, Parker was broad-shouldered and sleek, had hit for power and average in his brief minor-league career and, along with Omar Moreno and Miguel Dilone, was the fastest player in the Pirates’ farm system. Amazingly enough, he matched the arm strength — though not the laser accuracy — of Roberto Clemente, the Pittsburgh Pirate icon and the greatest defensive right fielder in the game’s history.

“It was totally unfair for one guy to have that much ability,’’ Augustine said recently, recalling events of 47 years ago. “It just never ceased to amaze you how good he was. He was just an incredible player and just a super, super nice guy. We always had a good relationship.’’

“He was hitting a ton that year with me,’’ recalled Charlies manager Joe Morgan in a recent interview from his home in Walpole, Massachusetts. “I know he was hittin’ the crap out of the ball.’’

Morgan, who later managed the Boston Red Sox for four seasons, added, “He hit the ball as hard as any guy I ever saw — line drives.’’

Parker’s three-month Charleston stint, incidentally, set him apart as the best ever in the Charlies’ 13-year existence.

At the time of his “out of here’’ proclamation, he was hitting .360 for the month of June, far exceeding expectations the Pirates had set for him in spring training that year in Bradenton, Florida.

Morgan and Pirates General Manager Joe L. Brown had taken a cautious approach, predicting a wonderful future but emphasizing his inexperience. After all, they noted, he had spent the 1972 season down in Salem, Virginia, of the Class A Carolina League.

Brown said he was at least a year away from the big leagues and, indeed, even suggested he might open the season in Sherbrooke, the Pirates’ Class AA team in Quebec. “Dave will find out this year, whether it’s in Sherbrooke or Charleston, that it’s not as easy as it looks,’’ Brown said in spring training.

“He’s impressive, but we’ll wait and see how he does when the bell rings,’’ Morgan added, agreeing with the general manager,

Similarly, the Pittsburgh Press’s Bob Smizik wrote: “To call Dave Parker merely a good prospect would be an absurdity. To say that he is an excellent prospect would not be doing justice to Parker’s skills.’’ Parker, wrote Smizik, was a “phenom.’’

Amid all the talk and speculation, Parker himself was being realistic. “I don’t expect to make the [Pirates] in spring training,’’ he said in March of 1973. “But I figure if I go to Charleston and get off good, I might get a call in June or July.’’

‘It was a power play’

After leaving Watt Powell on that Sunday afternoon, Parker drove home to Cincinnati and called Brown the next morning. His reasons for leaving the team, he told the general manager, were “personal,’’ and he remained in Cincinnati.

“It was a power play,’’ Parker said in a 1985 Gazette interview. “I had nothing else to prove [in Charleston]. I made up my mind that I was going to play in the big leagues or forget it.’’

About a week before his sudden departure, Parker had approached Morgan and requested a pay raise. Morgan still remembers. “And I said, ‘I can’t do much about that, but I can give you permission to talk with Joe Brown if you want,’ ’’ he recalled recently. “And he said, ‘When we come back from this road trip, if you don’t see me here, you’ll know why I’m not here.’ ’’

Using his column as an open letter to Parker, the Daily Mail’s Bill Smith wrote: “Your AWOL act won’t accomplish a thing. That walkout won’t get you more money from the Pittsburgh Pirates.’’

The Gazette’s A.L. (Shorty) Hardman wrote: “It was a breach of good conduct for the young man to leave Charleston without even saying goodbye.’’

Parker, meanwhile, was apparently getting antsy sitting at home, located near the site of old Crosley Field, where he once worked as a vendor, selling peanuts and lemonade. After several days in Cincinnati, Parker’s mother convinced him to call Brown again, and the two apparently agreed to a compromise.

Brown then called Morgan. “He said, ‘I had a long talk with Parker. I want you to also have a talk with him because he’s coming back to play for you tomorrow, which he did,’ ’’ the 89-year-old Morgan remembered.

Parker returned to play for the Charlies on Thursday, June 28, at Watt Powell Park, having missed three games, and remained with the club. “I’m kind of impatient, and I needed a little time to mull things over,’’ he told reporters.

The conversation with Brown obviously had gone well. “I love Joe L. Brown,’’ Parker said in the 1985 interview. “He’s a good man.’’

And Parker, perhaps blessed by the baseball gods, quickly found himself in the big leagues. On July 10 in San Diego, Pirates outfielder Gene Clines tore ligaments in his knee, prompting Brown and the Pirates to make the obvious move. They promoted Parker.

Brown, in fact, drove down from Pittsburgh to deliver the news and told the Charleston media, “I’m sending him to Pittsburgh. That’s what he’s been yelling for, so we’re going to give him a shot. We’ll see who’s right and who’s wrong.’’

Upon Parker’s promotion, Brown and Pirates manager Bill Virdon nevertheless remained cautious. “Both Bill and I are leery about Parker at this time,’’ said Brown. “We know he has a tremendous future, but we also realize that he has played only a half-season of Triple-A ball. We can’t be sure he’s ready.’’

Virdon told the media he would platoon him, benching him against left-handed pitchers.

For the remainder of the 1973 season, Parker remained in Pittsburgh and batted a respectable .288. And after an injury-filled 1974 season, he emerged as one of baseball’s best, hitting better than .300 for the next five seasons with the Pirates.

In that span, he won two batting titles and the 1978 National League MVP award, earned three Gold Gloves and helped the Pirates to a 1979 World Series championship. In addition, he finished third in the MVP voting in 1975 and third again 1977 and picked up MVP honors in the 1979 All-Star Game, throwing out runners at third base and home.

He looked like a lock to someday reach the Baseball Hall of Fame. Or better yet, it seemed he might even draw comparisons to the sainted Clemente, his right-field predecessor and a player generally considered incomparable.

In January of 1979, Parker signed a $5 million, five-year contract, making him the first athlete in team sports to earn $1 million a season. (In November of 1979, Houston signed Nolan Ryan to a four-year, $4.5 million deal.)

Parker’s career, however, suddenly dropped into free fall. He later admitted beginning a cocaine habit during the 1979 season, and his production began falling in 1980. And his weight increased noticeably. When he arrived at spring training in 1981 weighing 255 pounds, White Sox broadcaster Jimmy Piersall called him “a baby hippo’’ and “a baby whale.’’

Overweight and plagued by cocaine, Parker struggled, causing Pirate fans to turn on him. The fans did not yet know of his drug problem but disapproved of a fat, unproductive millionaire ballplayer. Further ticking off the blue-collar Pittsburghers, Parker had taken to wearing earrings on the field, the first player to do so, according to the Cincinnati Enquirer.

“The people took their frustrations out on me,’’ Parker recalled.

Pittsburgh’s steel mills, meanwhile, began closing, leading to a regional recession and adding fuel to the fans’ resentment. Making matters worse, he made public comments that many white fans interpreted as arrogant and militant in a black athlete. In 1980, a fan threw a 9-volt battery at him in a game in Pittsburgh.

“If Parker ran unopposed for mayor,’’ wrote the Post-Gazette’s Charlie Feeney, “he’d lose in a landslide.’’

Back home in Cincy

In December of 1983, Parker signed as a free agent with the Reds and spent four highly productive seasons in Cincinnati, finishing second in the 1985 MVP voting and fifth in 1986. He later said he discontinued his drug use after the 1983 season, a statement bolstered by his on-field performance. “My game was slipping,’’ he said, “and cocaine had played some part in it.’’

In his four Cincinnati seasons, he impressed Reds broadcaster Marty Brennaman with more than just his baseball skills. “He’s the funniest man I ever met in baseball,’’ Brennaman said at the time. “He’s got the quickest wit.’’

After leaving Cincinnati, he played four more seasons in Oakland, California and Toronto. But his three troubled seasons in Pittsburgh undoubtedly cost him a place in the Baseball Hall of Fame — at least for now.

Hope remains, however, with the 16-man veterans committee. He received seven votes in the 2019 balloting, leaving him five votes short of enshrinement. The committee will vote again in 2023.