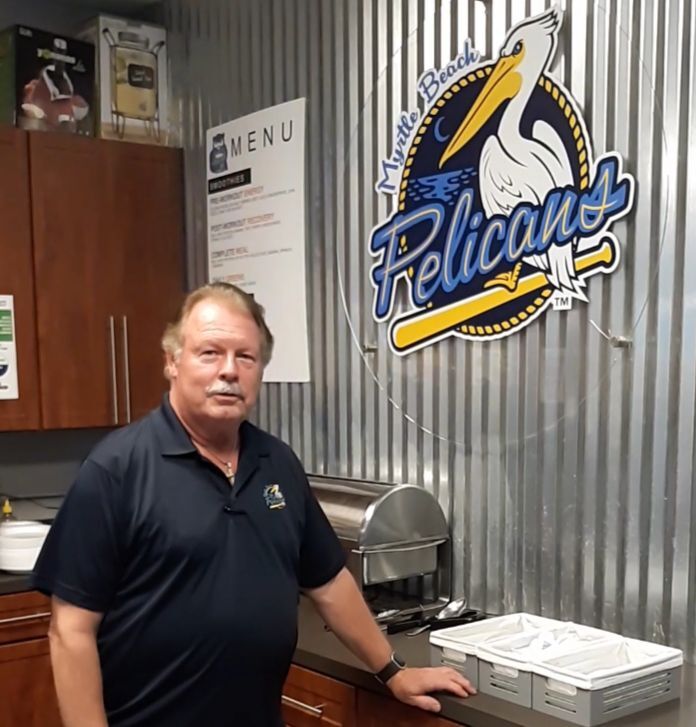 Charleston native Stan Hunter, who worked as a clubhouse attendant at Watt Powell Park in the 1970s and ’80s, now works for the Myrtle Beach Pelicans. 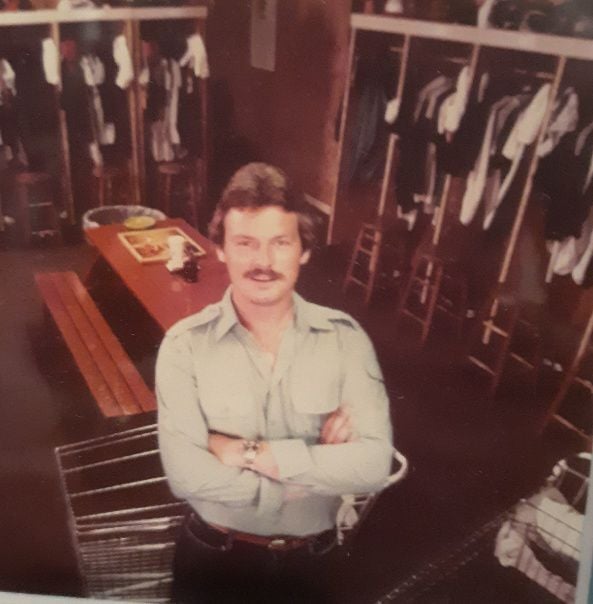 Stan Hunter stands in the Watt Powell Park clubhouse during his days as a clubhouse attendant.

Charleston native Stan Hunter, who worked as a clubhouse attendant at Watt Powell Park in the 1970s and ’80s, now works for the Myrtle Beach Pelicans.

Stan Hunter stands in the Watt Powell Park clubhouse during his days as a clubhouse attendant.

When Stan Hunter and his entourage arrived at Muldoon’s bar at about 10 p.m., the line stretched out the door and down Capitol Street. Not that it mattered. Hunter’s entourage included Mickey Mantle, one of the most celebrated athletes in our nation’s history. It also included Baseball Hall of Famers Whitey Ford and Eddie Mathews.

It was June 19, 1980, and the city’s bar scene, particularly Muldoon’s in the Woolworth building, was flourishing. Hunter and his entourage, of course, were quickly welcomed inside. (Try to picture Mickey Mantle, Whitey Ford and Eddie Mathews standing in line on Capitol Street alongside Charleston millennials waiting to get in Muldoon’s.)

As the group entered, the Muldoon’s proprietor recognized Hunter, who occasionally tended bar there. The proprietor complimented him on his choice of companionship and assured him that everything was on the house. Not that Mantle, Ford and Mathews needed freebies.

The bar patrons descended on them, shaking their hands, talking baseball, requesting autographs and, of course, buying them drinks. The celebrities du jour seemed to enjoy themselves and especially enjoyed the limitless drinks, putting a strain on the bar’s inventory. “I remember those guys getting hammered,’’ Hunter said recently from his home in Myrtle Beach, South Carolina, recalling events of 40 years ago.

As the evening progressed, Hunter sat quietly with his famous companions and focused on staying sober. “I’m responsible for these guys,’’ he told the bartender after a few light drinks, “so don’t give me any more alcohol.’’ And as the designated driver, he thought to himself: “The last thing I need is a headline tomorrow that says man has accident and kills Hall of Famers.’’

As the wee hours approached, Muldoon’s closed. For heavy-duty revelers like Mantle, Ford and Mathews, however, the night was still young. “Any other bars still open?’’ Mantle asked. Hunter said no but, not wanting to be a spoilsport, suggested they go back to the visitors clubhouse at Watt Powell Park, where he worked as the attendant.

He kept a cooler full of beer for the players there, and they could help themselves. And so they headed for the ballpark where Mantle, Ford and Mathews concluded the night with four or five more beers apiece. Hunter then drove them to their Kanawha City motel.

Earlier in the evening, Mantle and Ford had made an appearance at Watt Powell Park and signed autographs during a Charleston Charlies game, picking up easy paychecks in their travels around the country. Mathews, who also signed autographs, worked as the Texas Rangers’ minor-league hitting instructor and was in town instructing the Charlies, the Rangers’ Class AAA farm club.

Before the game, Mantle had met Hunter in the visitors clubhouse, extending his hand and saying, “Hi, I’m Mickey Mantle.’’ He even referred to him affectionately as “clubby,’’ baseball parlance for clubhouse attendant, whose duties included preparing pregame and postgame meals, washing uniforms, cleaning and shining shoes and keeping the clubhouse tidy and the players happy.

Mantle complimented Hunter on his clubhouse décor, noting the inspirational posters, baseball pennants and backgammon board. The Yankee icon seemed to take a liking to the 23-year-old Hunter, perhaps recognizing his laid-back West Virginia bonhomie. Or maybe he needed a designated driver and a guide to Charleston’s night life.

Mantle even challenged Hunter to a game of backgammon, citing his expertise from his Yankee clubhouse days, and promised him a night on the town, joking that the loser would buy the drinks. After Stan beat him two out of three, Mantle said, “We’ll see you after the game.’’

And sure enough after the game, Hunter heard a knock on the clubhouse door. It was Mantle. “Ready to go, kid?’’ he said. At the moment, Hunter was gathering the visiting players’ uniforms — two sets for 25 players and staff — and preparing to take them to an all-night laundromat on East Washington and Bradford streets. It was one of the many postgame chores that still awaited him.

But a night on the town with baseball royalty was too good to pass up, even if it meant sleep deprivation. The four of them hopped into Hunter’s vehicle and headed for Muldoon’s. “I didn’t sleep for almost 48 hours,’’ Hunter remembered.

By the way, Mantle, Ford and Mathews signed a baseball and a promotional photo and gave them to him as keepsakes.

In 45 years as a baseball clubhouse attendant, beginning with the Charleston Charlies and spanning the Richmond Braves, Tidewater Tides, Houston Astros, Cleveland Indians and Myrtle Beach Pelicans, Hunter’s night with Mantle, Ford and Mathews still ranks as his most memorable.

He grew up on Watts Hill on Charleston’s West Side and, as a student at Stonewall Jackson High School, sold concessions at Watt Powell Park and worked as a Charlies batboy. In 1975, the year he graduated from Stonewall, he began working as an assistant in the visiting clubhouse and moved up to top man a year later.

He learned by trial and error. Working with Watt Powell’s limited facilities, he prepared players’ meals on hot plates and crock pots or by hurrying up the street for a big batch of Kentucky Fried Chicken.

His mother would sometimes fix enough food for the whole team and, along about the fourth inning, he would drive to his West Side home and bring it back in time for postgame feeding. He always kept fruits, salads and desserts available. On spaghetti nights, he would use his mother’s special sauce.

Or if a player requested a hamburger, chewing tobacco or anything else, he would find it someplace in Kanawha City. For most of his grocery needs, he would visit Kroger on MacCorkle Avenue and 38th Street, three blocks from the ballpark.

Watt Powell’s antiquated clubhouse lacked air-conditioning, but he improvised. He would buy two blocks of ice on Patrick Street, set one on each side of the clubhouse and position giant fans behind them. The players, he recalled, would often fight to get lockers close to the fans.

Laundry required a trip to the East End laundromat with its oversized washers, a postgame job that extended past midnight.

On the nights when a new visiting team arrived in town, the bus would drop off the players at their downtown hotel — usually the Daniel Boone or Heart-o-Town — and then stop at Watt Powell to unload the equipment, often at 3 or 4 in the morning. Hunter was always there to help.

He never worked on salary but charged daily clubhouse dues. Invariably, many of the players would leave tips.

Along the way, he tended to the needs of budding baseball greats, near greats and countless other Class AAA International League players who passed through Watt Powell’s visiting clubhouse from 1976-83 — excluding the 1979 season when he worked as a clubhouse assistant at Houston’s Astrodome.

Hunter still remembers Robinson, two years after his retirement as a player, sitting in the clubhouse in 1978 and telling baseball stories, surrounded by spellbound players. “The players always told me they loved sitting around and listening to him,’’ said Hunter.

He especially remembers Boggs’ ferocious work ethic. As a 22-year-old prospect in 1980, Boggs had a reputation as a gifted hitter but poor fielder. To overcome his defensive shortcomings, he would arrive early at Watt Powell and, as a Pawtucket coach hit fungoes, would endlessly field ground balls at third base.

If he made an error during the game or was dissatisfied with his defensive play, he and the coach would be back to the field for postgame work. “I forget who the coach was,’’ Hunter recalled, “but he told me, ‘This guy is killing me.’ ’’

The Pittsburgh Pirates were coming to Watt Powell Park to play the Charlies in an exhibition game. Willie Stargell, Al Oliver, Dave Parker, Richie Zisk, Richie Hebner, John Candelaria, Kent Tekulve, Bob Moose and others would be there.

It was 1976, Hunter’s first year as clubhouse attendant for the ballpark’s visiting players and, as a guy who appreciated tips, he saw an obvious opportunity. If treated well, he reasoned, the wealthy big-leaguers would tip far more generously than the Class AAA guys.

With his mother’s assistance, he prepared a tempting smorgasbord of roast beef, baked ham, turkey, mashed potatoes and gravy, corn, baked beans, green-bean casserole and deviled eggs. For dessert, he had strawberry shortcake, hot apple pie and ice cream. (Athletes were not yet nutrition conscious.)

As a special treat, he purchased a big cake from a local bakery that bore a candied inscription that read: “Pittsburgh Pirates, Welcome to Charleston.’’

Everything seemed to be progressing nicely. The Pirates played their exhibition game, returned to the clubhouse and devoured their postgame feast, served on two large tables in the middle of the clubhouse.

But Stargell, the Pirates’ captain and preeminent jokester, began investigating the cake and, flanked by Hebner and Moose, leaned down and pretended to smell it. “Hey, clubby,’’ Stargell yelled at the 19-year-old Hunter, “where’d you get this cake? It’s a good-lookin’ cake, but how old is it? It smells funny.’’ Hebner and Moose nodded in agreement.

Hunter countered that the cake was fresh, that he had just picked it up from the bakery that morning. Meanwhile, the other players were paying close attention, knowing that Hunter would soon be victimized.

Stargell invited Hunter over to the cake and suggested he lean down and smell it. When Hunter obliged, Stargell, of course, shoved Hunter’s face in the thick icing, prompting uproarious laughter throughout the little clubhouse.

“I was still blowing cake out of my nose the next day,’’ Hunter recalled all these years later.

Not that Stargell and the Pirates were a bunch of jerks. They paid for the cake and, led by Stargell, tipped Hunter more than generously.

It was all part of Hunter’s baseball education. He learned that baseball humor tends toward the Three Stooges and that unsuspecting clubhouse attendants are vulnerable to grade-school pranks. Since then, he’s kept a wary eye and has remained unscathed in the succeeding years.

For the past 11 seasons, Hunter has worked as clubhouse attendant for the Myrtle Beach Pelicans, a Chicago Cubs affiliate in the high-A Carolina League. The Pelicans play in a 4,800-seat ballpark a few blocks from the beach and have averaged about 3,300 fans a game in recent years.

When the Charlies left Charleston after the 1983 season, Hunter pursued his baseball profession elsewhere and, along the way, has catered to countless other players en route to MLB success. He got married at home plate at Richmond’s ballpark under a canopy of baseball bats held aloft by the players. He spent a few seasons working in the Cleveland Indians clubhouse. He’s a cancer survivor.

After 45 years on the job, he’s looking ahead to next year and, assuming minor-league baseball returns, hopes to work another five seasons. “I’m shooting for 50 years,’’ he said.