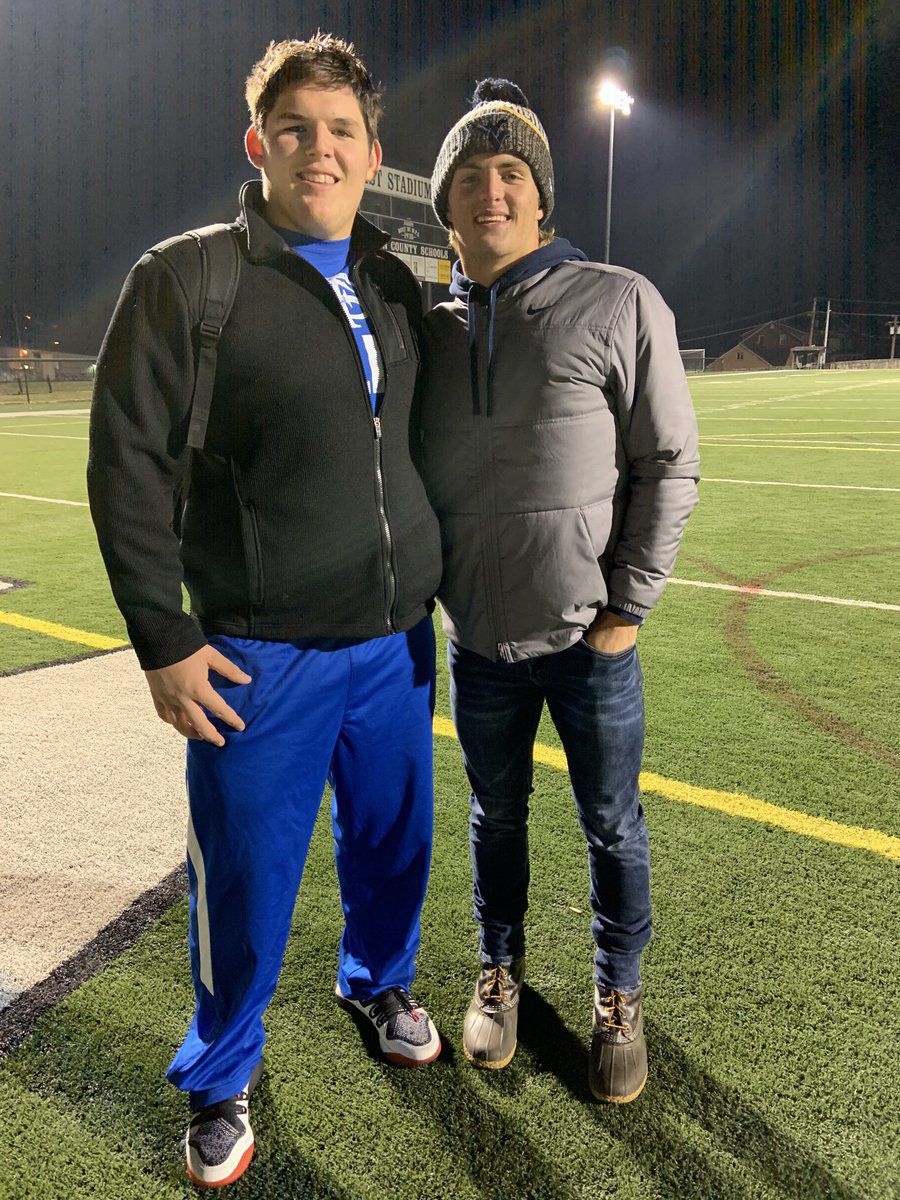 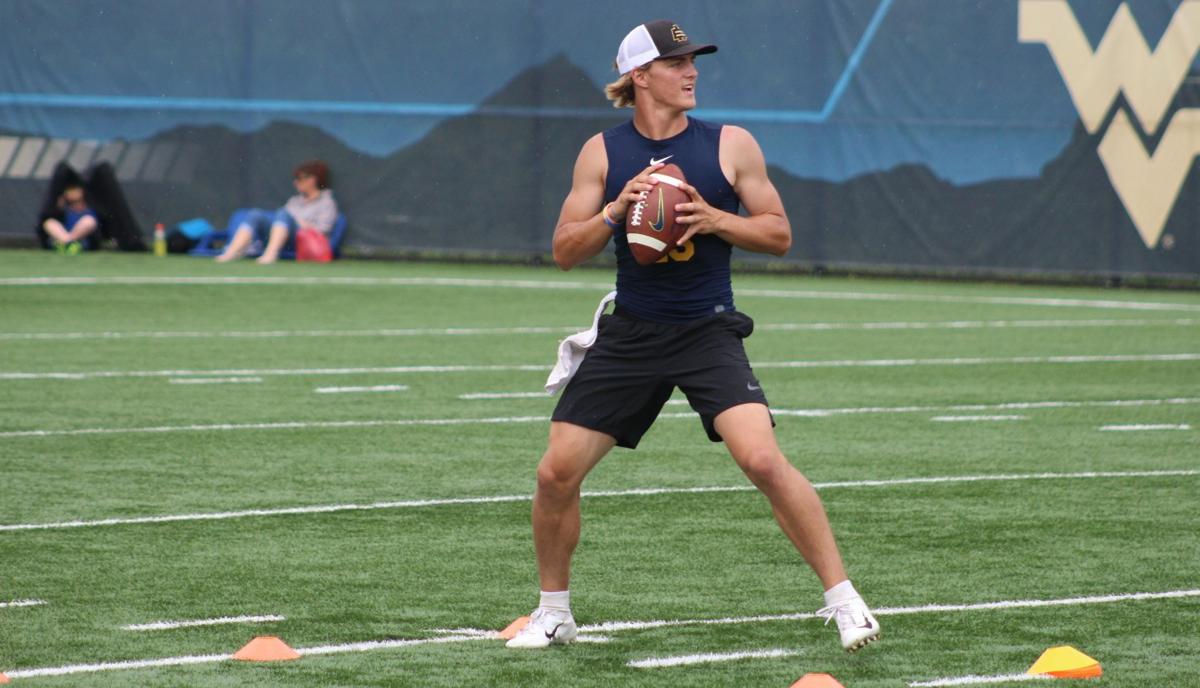 The relationship between a quarterback and a center is without a doubt an important one.

The two need to be on the same page, and in that sense the West Virginia University football team could be in good hands in the not-so-distant future.

Neal Brown will introduce the majority of his first full class of recruits Wednesday as the early signing period opens. Among that bunch will be quarterback Garrett Greene from Florida and center Zach Frazier, a local standout at Fairmont Senior High. Despite the more than 800 miles of distance between Fairmont and Greene’s home in Tallahassee, Florida, the two have started to develop a bond that they, along with West Virginia coaches and fans, hope can develop into something special in Morgantown.

That bond was on display last month when Frazier’s Polar Bears were hosting Frankfort for a Class AA state playoff game. The game was a on a Friday, the night before WVU hosted Oklahoma State, and Greene was planning to make the trip from Florida to see the Mountaineers’ final home game of the 2019 season. While he was in the Mountain State, he figured making the short trip from Morgantown to “The Friendly City” was in order.

“We came in on Friday at like noon and [Frazier] was playing 30 minutes away,” Greene said in a phone interview this week. “I had to go watch my future center play.”

Fairmont Senior walloped Frankfort that night, 31-7, and the pair of future Mountaineers took the time to snap a photo together for social media after.

“Yeah, that was really cool,” Frazier said. “We’ve been talking a lot. I’m really excited and looking forward to the next couple of years with [Greene].”

While both are expected to sign their National Letters of Intent for WVU on Wednesday, there will be a bit of a delay for the pair meeting back in Morgantown as Mountaineer teammates.

Greene — the son of former Major League Baseball catcher Charlie Greene who also holds offers from Georgia Tech, Mississippi, Mississippi State and TCU (among others), and as recently as last week was contacted late in the process by his hometown school Florida State and its new coaching staff — will graduate high school this month and enroll next month at West Virginia. Frazier, on the other hand, will not be there in January. He still has some work to do before completing his career as a prep athlete.

In addition to being one of the best offensive linemen in the state, Frazier is a three-time Class AA wrestling state champion in the 285-pound weight class. With another title this season, Frazier would become the first Polar Bear to ever win four high school wrestling state championships and just the 19th wrestler in West Virginia high school history to finish a career with four individual titles. Marion County has been home to some of the best prep wrestling in the state for a long time, but Frazier can join North Marion’s Doug Moore (1990, 1991, 1992 and 1993) and the county’s only four-time champs.

In addition to all of that, no West Virginia high school wrestler has ever won four titles in the same weight class. Needless to say, Frazier is already all over the state’s wrestling record book. But with a successful senior season, he can cement himself as one of the best to ever do it in West Virginia.

Wrestling is important to the future Mountaineer, and it is more than something he simply enjoys. Wrestling is in Frazier’s blood. His grandfather, Don Courtney, was the 175-pound state champ for Fairmont Senior in 1970. Three of Frazier’s uncles — Chris Courtney (1993), Ryan Courtney (1996) and Jeff Courtney (2001, 2002) — were also Polar Bear wrestling state title winners.

“I’ve been [wrestling] since I was probably four or five,” Frazier said. “It’s just something I’ve always loved to do and it’s definitely a family tradition too. My three uncles on my mom’s side were all state champions, and my grandpa was too.”

Greene was no slouch outside football either. Like his father, Greene played catcher and was thought by some to have professional potential in baseball. Last spring, however, Greene’s baseball career ended when he let loose an expletive after being tagged out at home plate on a close play in a playoff game. Greene was positive he beat the tag, but the umpire had a different opinion.

He was ejected from that game and initially hit with a six-week suspension, which would have carried into his senior season of football. The suspension was appealed and Greene ended up sitting out a spring football game and three baseball playoff games.

Brown told the media during the season that he sometimes will cover his face with a play-card if he thinks he might curse and get caught doing so on TV where his mother would see. What Greene did was not unforgivable and not a big deal, but it definitely got the WVU football coach’s attention. He offered Greene some advice, but didn’t mention hiding his face if he wants to curse on the field.

“[Brown] loved the competitiveness in me, but he also told me that the quarterback, the leader of the team, he can’t be making those mistakes,” Greene said. “It’s something I learned from — to control my emotions and not let them get the best of me. it was definitely a learning experience for me.”