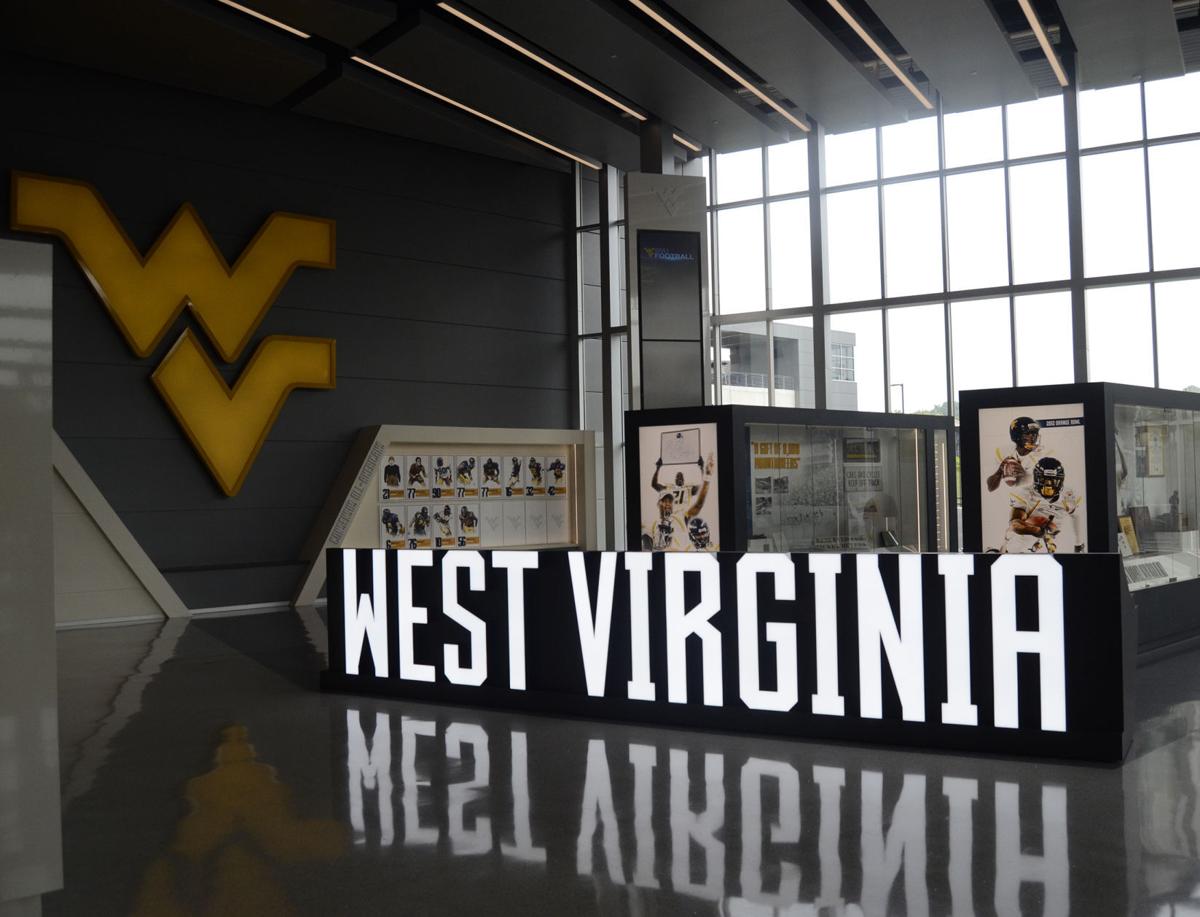 The Puskar Center Hall of Traditions showcases some of the most important artifacts in WVU football program history. 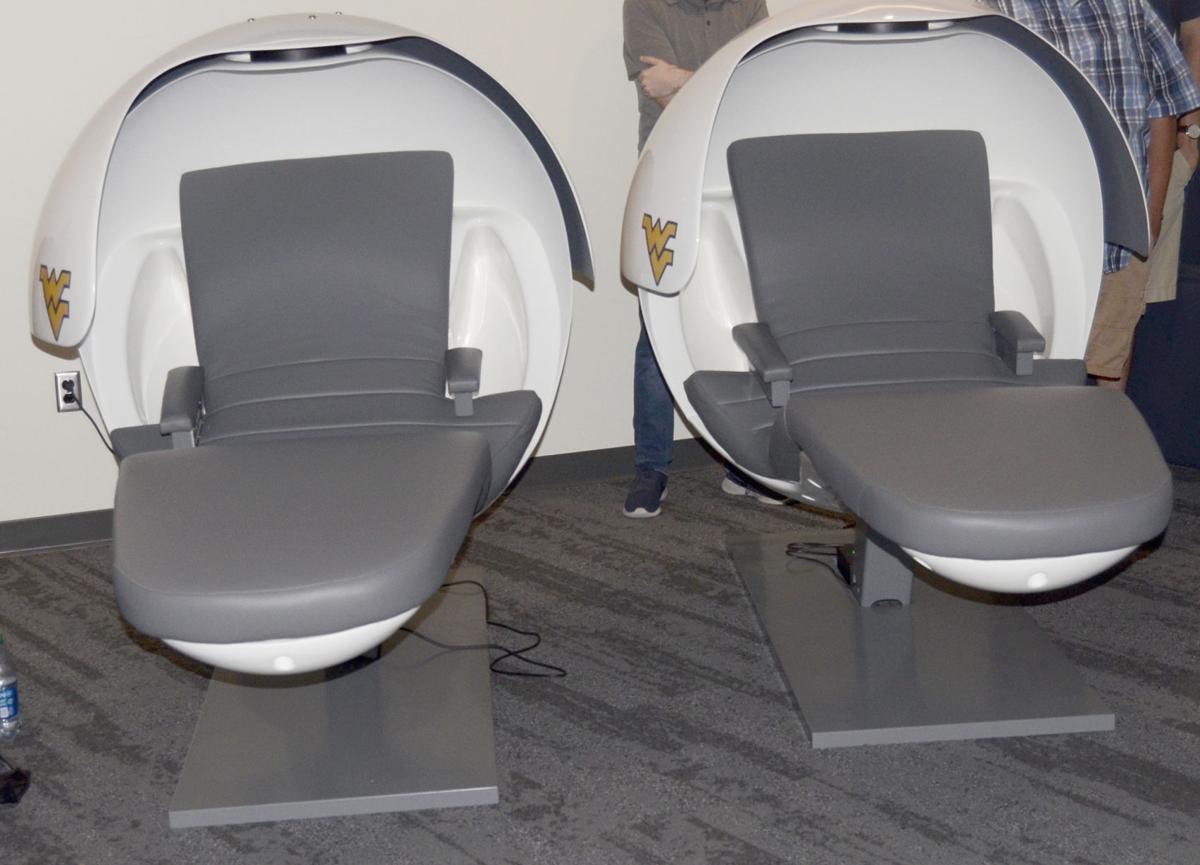 The Puskar Center Hall of Traditions showcases some of the most important artifacts in WVU football program history.

The project has been two years in the making and has come at an estimated cost of $55 million.

As of late, Brown and his staff have had major momentum in terms of recruitment, securing eight commitments since the beginning of June. On Tuesday, he proudly unveiled what he believes to be a major reason why.

An 85,000-square-foot, two-story maze containing halls and rooms full of the latest technology, complete with plenty of artistic flair, the updated Puskar Center has nearly everything a player could need to survive, much less just play football.

“I’m excited about it. We’ve got great momentum in recruiting, and I think this is a big reason why we have that momentum,” Brown said. “I think this gives us an opportunity to compete. A lot of hard work, a lot of thought put into it, and I’m fired up about how it’s all turned out.”

Something impressive could be found behind each door Brown opened during the hour-long stroll through the sprawling facility.

From barbershops and recording studios to a sleep room and multiple nutrition/hydration/refueling hubs, nearly everything a player could imagine, from health to artistic expression, is accounted for somewhere in the Puskar Center.

It all starts at the Hall of Traditions, where the tour started at the front corner of the building. A large open space showcases some of the most important artifacts in the program’s history, including trophies from all three of WVU’s BCS bowl games (2005 Sugar Bowl, 2008 Fiesta Bowl and 2012 Orange Bowl).

Trophies from the team’s other bowl conquests were in a separate case, with plenty of room for additions.

Near the ceiling at the front of the room is a video screen and, in the center, a long table that features a timeline of the program as well as a listing of historic wins. Adjacent to each one is a football, and when an accompanying button is pressed, a highlight film is played on the big screen with accompanying audio from broadcaster Tony Caridi.

Also displayed are conference championship rings and trophies and various other logos, signs and newspaper articles. One big case at the front is dedicated to former Mountaineer coach Don Nehlen, who Brown said was one of the first to get the tour of the new facility.

“Probably three big moments that we’ve had here that I almost got a little emotional about,” Brown said. “First, Coach Nehlen came and we were able to show him around — this was back in the spring when everything was done, not necessarily the finishing touches. But he’s one of the first people to come in here and he was excited.

“And then we had our first recruiting weekend, which that was a whole different deal. It had been almost 15 months since anybody had been on campus, and to be able to open up, bring them in this facility just like you’re doing today. And then last week, [late former WVU coach] Bill Stewart’s family — his wife, his son — came up here and went on the tour, so that was neat.”

The laundry list of features once moving past the Hall of Traditions is nearly too long to track upon one visit.

Down a flight of stairs is the players’ lounge, a room equipped with a recording studio, a barbershop, a kitchen, ping-pong tables, a pool table, three televisions for Xbox and PlayStation games and, what Brown said was the biggest request, two Pop-A-Shot basketball machines. Adjacent to the lounge is the sleep room, consisting of two sleep pods, massage chairs and zero-gravity seats that recline to the point of getting a player’s feet elevated above his heart.

As impressive as any room in the place, the main locker room opens up upon entering, featuring video screens, matching lights and a giant flying WV logo mounted to the ceiling.

Each locker is equipped with multiple levels of storage, an electronic nameplate complete with a photo at the top and built-in phone chargers. Adjacent is also an NFL locker room for any WVU player currently in the league to return to campus and work out in the offseason.

Strength and conditioning coach Mike Joseph was on hand to give a tour of the updated training facilities, including an impressive recovery room that included features like flow tanks, which contain a pool of 96-degree water with 800-900 pounds of Epsom salts, thus making players virtually weightless and with no pressure points. Joseph estimated some players made two to three visits a week to the tanks.

Rehab and training areas, academic and tutoring rooms, coaches offices, meeting rooms for each positional group complete with stadium seating, an impressive NFL hallway that features a helmet from each team in the league and a complete list of every WVU player that played for that team — even the parking lot and exterior appearance, complete with new landscaping and tinted windows, was on display.

Then there was the mudroom, in which players coming from practice or games will go almost conveyor belt-style through discarding soiled uniforms and pads, hanging up shoes and cleats, walking through jet dryers designed to get rid of any pieces of black rubber from the turf fields that may have been stuck on a player, then straight into a narrow cooling pool that leads to the team’s showers.

While much of the tour was matter-of-fact after the opening, one room loomed a little heavier. Without an official name, it’s the first room through which players will return from practice and the last room players will exit on their way to the field.

One wall, referred to by Brown as “the player wall,” consists of a photo from each player. On the opposite wall, not yet completed, will be a West Virginia state flag. Brown said both will serve as final reminders.

“Essentially, it goes back to the name on the front and name on the back of the jersey,” Brown said. “I want them thinking about that as they go to practice and go to games.”