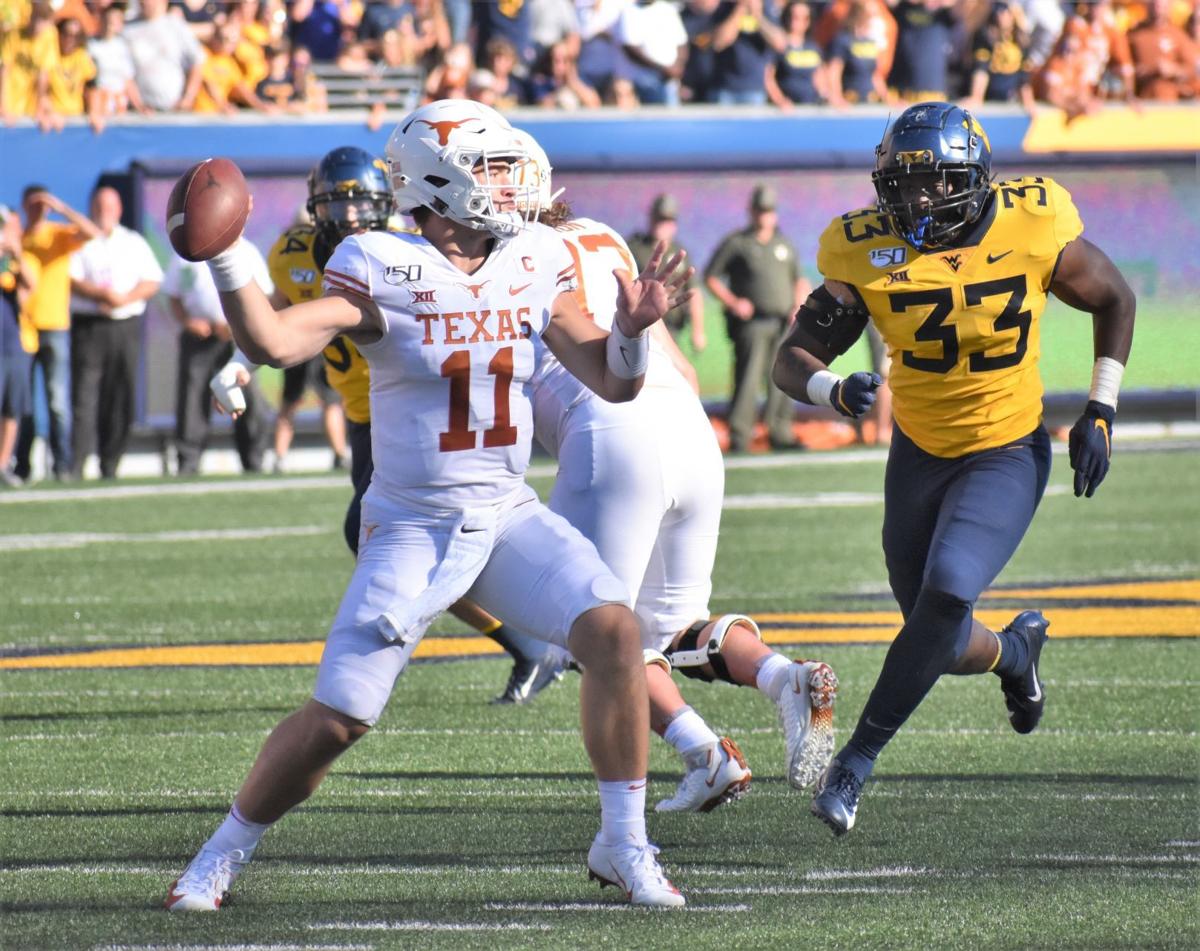 Texas quarterback Sam Ehlinger attempts to pass with West Virginia’s Quondarius Qualls in pursuit during the Longhorns’ win against WVU Saturday in Morgantown. 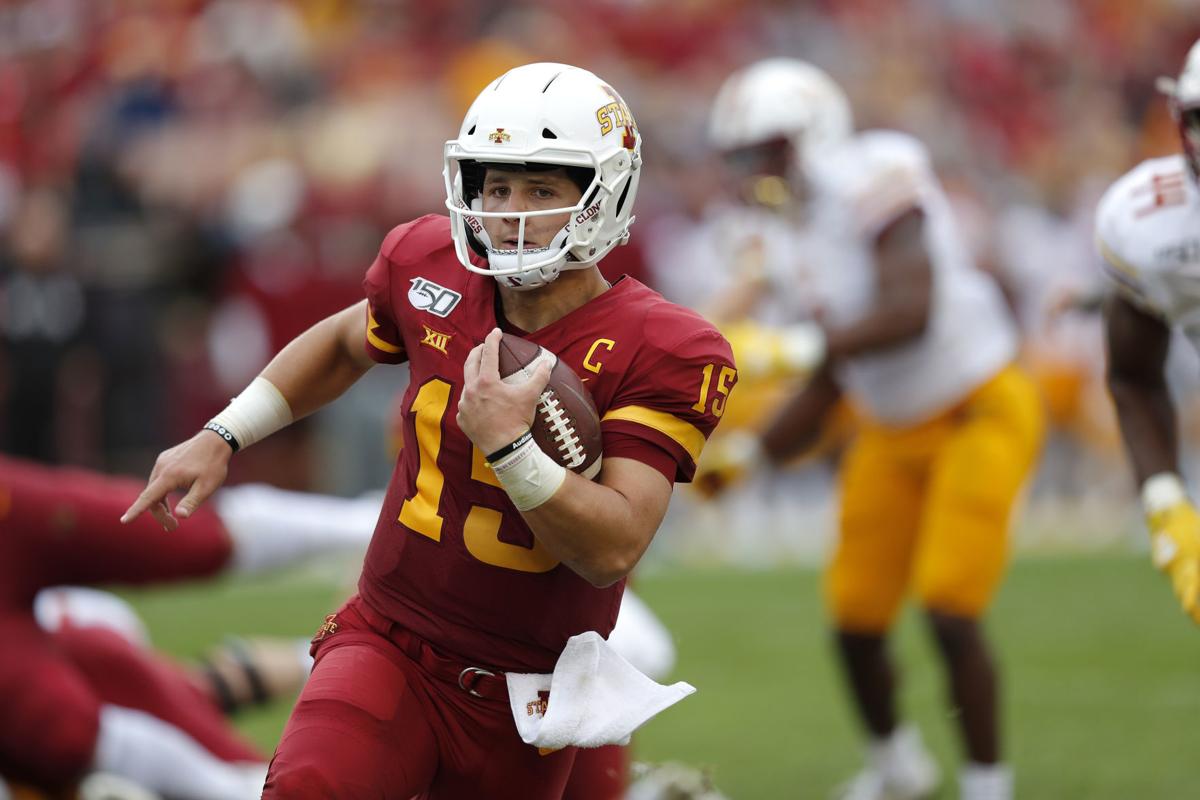 Iowa State quarterback Brock Purdy runs the ball for a first down against Louisiana-Monroe during the first half of an NCAA college football game, Saturday, Sept. 21, 2019, in Ames. (AP Photo/Matthew Putney)

Texas quarterback Sam Ehlinger attempts to pass with West Virginia’s Quondarius Qualls in pursuit during the Longhorns’ win against WVU Saturday in Morgantown.

Iowa State quarterback Brock Purdy runs the ball for a first down against Louisiana-Monroe during the first half of an NCAA college football game, Saturday, Sept. 21, 2019, in Ames. (AP Photo/Matthew Putney)

Perhaps it is just a coincidence with how the 2019 West Virginia schedule fell or maybe it is a sign of the direction many college football programs are headed, but this week will be the fifth time in six games West Virginia has faced a team with a quarterback capable of tucking the ball and hurting the Mountaineers in the run game.

West Virginia has had to deal with standouts such as Missouri’s Kelly Bryant and Texas’ Sam Ehlinger so far this season, but when the Mountaineers (3-2, 1-1 Big 12) take on visiting Iowa State (3-2, 1-1) on Saturday (4 p.m. on ESPN), they will get perhaps their biggest challenge to date.

ISU quarterback Brock Purdy got off to a slow start to the season, but the sophomore who carved up the Mountaineers as a freshman in Ames has come on strong in recent weeks with a lopsided win against TCU the latest example of his talent and potential.

Against the Horned Frogs on Saturday, Purdy completed 19 of 24 pass attempts for for 247 yards and two touchdowns to go along with a team-leading 102 rushing yards on 12 carries. This will be the first time the Cyclones and Purdy have played against a WVU team with Neal Brown as the head coach, but that hasn’t stopped the Cyclones quarterback from gaining a fan in the new man on the Mountaineer sideline.

“Purdy is playing really good,” Brown said on Monday’s Big 12 coaches teleconference. “I’m super impressed. I think he’s in the conversation to be the best quarterback we’ve played, and we played two really good ones already. He’s in the conversation and I’m so impressed with what he’s done. Offensively they’re playing at a really high level, and their stats show that. He’s throwing the ball down the field. His long speed is good and he’s big enough to run physical. I’m really impressed with what he’s done. Early on, outside of the numbers that [Oklahoma quarterback Jalen] Hurts is putting up, he’s in contention to be looked at as one of the top players in our league offensively, for sure.”

Purdy is currently second to Hurts for the Big 12 lead in total offense at 356.2 yards per game. His average of 315.6 passing yards per game leads the conference and he also leads the Cyclones with 203 total rushing yards to go with five rushing touchdowns.

Having played so many teams with dual-threat capable quarterbacks, there certainly are some similarities the Mountaineers have identified in defending against it. When it comes down to the individual players, however, Brown said Purdy, along with Ehlinger and Bryant, have all been used in different ways.

“How they run Purdy is quite a bit different than how [Texas has] run Ehlinger,” Brown said. “Missouri wasn’t really running Kelly Bryant — Clemson did but Missouri wasn’t at that time, so our defensive calls are different. Brock is faster than some of the other dual-threat quarterbacks we’ve played.

“He’s got a really strong lower body and he’s fast. He has broken a lot of tackles this year.”

HAND IT TO KENDALL

In that September game against Missouri, WVU starting quarterback Austin Kendall smacked his throwing hand off the helmet of a Tigers’ defender and sustained a pretty nasty cut as a result. The Athletic reported on Sunday that an infection in the ailing hand, which had been re-injured during practice, forced Kendall to spend two nights in the hospital during West Virginia’s bye week and kept him out of one practice.

Brown addressed the bye week situation with the quarterback’s throwing hand on Monday.

“He missed one practice last week,” Brown said. “He missed our practice on Sunday. He practiced the rest of the time. There is zero question about his toughness. If you go back and watch our first three games and the amount of hits he took in those games, to be able to get up and come back and really I don’t think he missed any time for any of those hits. He missed a practice on Sunday. He’s a tough guy and he came back and practiced the rest of the week.”

“I thought he gave us a chance on Saturday,” Brown said.