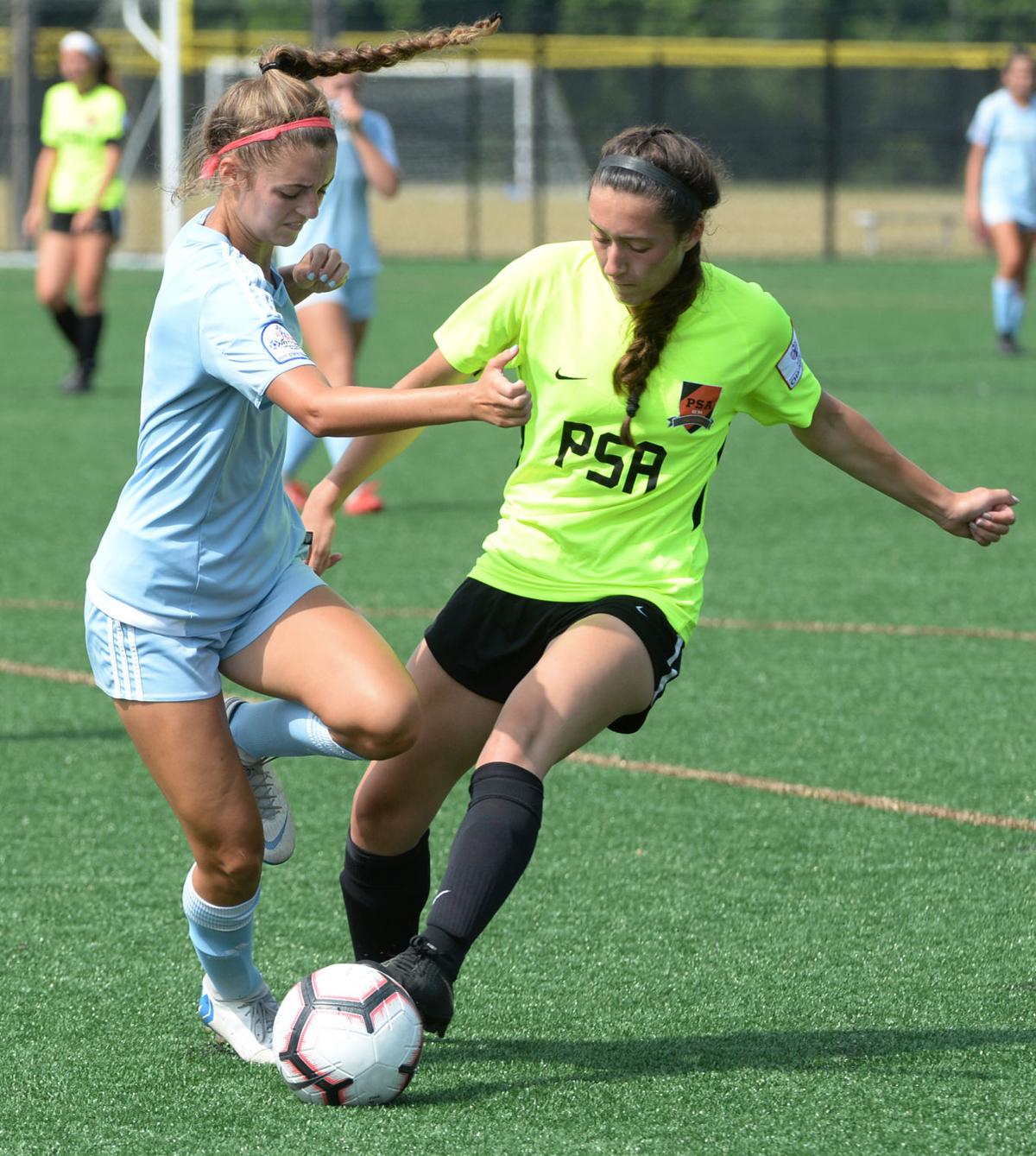 Delaware FC plays PSA National 03 (NJ) in the U-16 girls semifinals of the US Youth Soccer Eastern Regional Championships Wednesday. 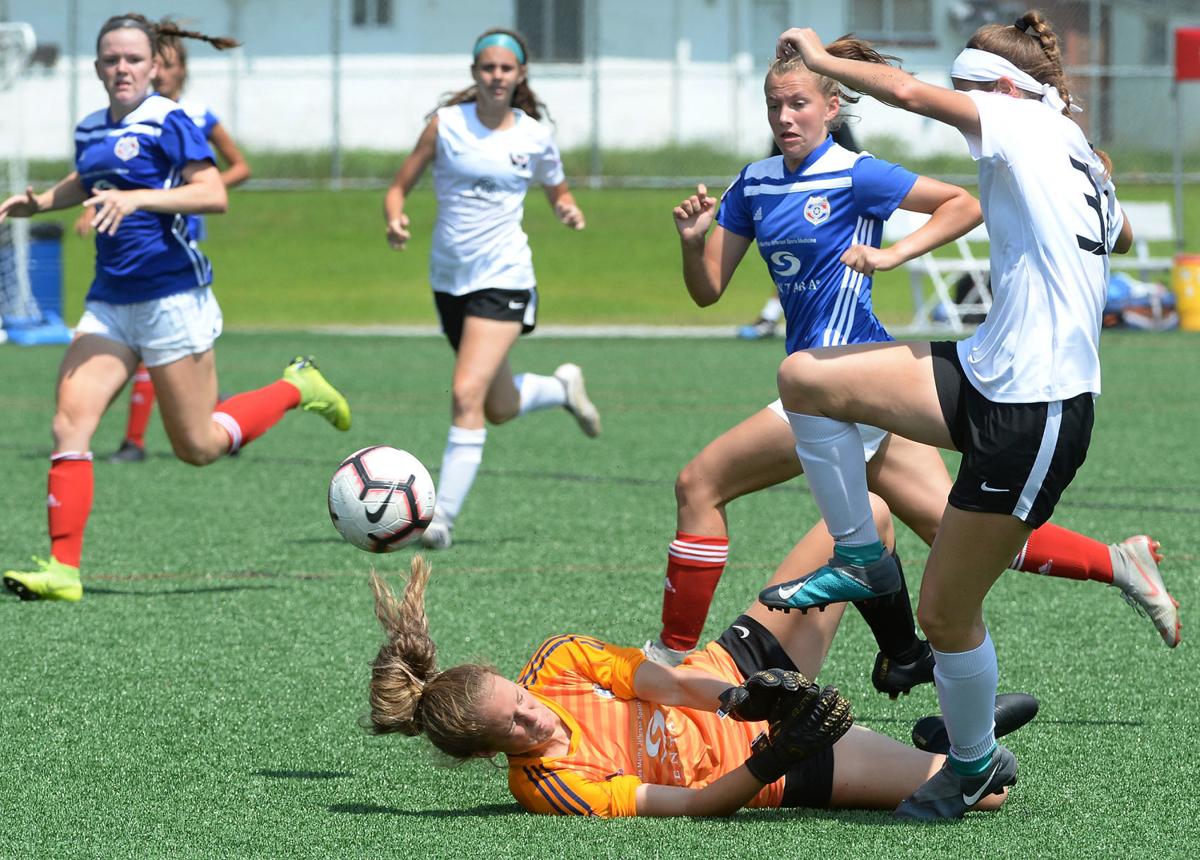 Karina Long, goalkeeper for the SOCA 03 Elite of Virginia, falls to the turf trying to defend the goal as Isabella Nota, right, of the Revolution Rowdies (PA) tries to score in the U-16 girls semifinals Wednesday.

Delaware FC plays PSA National 03 (NJ) in the U-16 girls semifinals of the US Youth Soccer Eastern Regional Championships Wednesday.

Karina Long, goalkeeper for the SOCA 03 Elite of Virginia, falls to the turf trying to defend the goal as Isabella Nota, right, of the Revolution Rowdies (PA) tries to score in the U-16 girls semifinals Wednesday.

Add it all up – 260 soccer teams on fields in Kanawha and Cabell counties over seven days with an estimated economic impact of nearly $20 million – and there’s plenty for organizers of the U.S. Youth Soccer Eastern Regional Championships to be happy about. What makes them even happier? They’ll do it all again this time next year.

It already had been announced that the Shawnee Sports Complex and the Barboursville Soccer Complex would host both the Eastern Regional and the USYS Eastern Presidents Cup in 2020. But what about after that? Could the area become a perennial contender for those events? From all accounts, it has put itself in a strong position for that.

Tournament organizers said they’ll use the lessons from this year to not just improve the experience for participants and spectators next year, but to make sure that Shawnee and Barboursville stay at the front of USYS officials’ minds when future sites are announced.

Brad Roos, East Region chair of the USYS National Championships Committee, was very impressed with what he saw over the past week.

“The staff here have done a great job,” Roos said. “They have bent over backwards, as have all the West Virginia volunteers. They’ve made everyone feel really at home and that this is a place they feel welcome.”

One of the most impressive points was the Shawnee complex itself, which hosted pool play for most of the Eastern Regional age groups and all of the semifinal and championship rounds. The new artificial turf fields were an important addition, Roos said, especially considering the fact that one of the key concerns in past years when West Virignia hosted the regional was field conditions.

“I think when people found out it was going to be in West Virginia again, they thought it was going to be the same old, same old,” Roos said. “Quite honestly, this facility is phenomenal. People have been very impressed who have walked into it. That’s given people a new respect for the state and what they’re willing to do.”

Competition fields were just part of the formula, said Kanawha County Commissioner Ben Salango, one of the key individuals in the development of Shawnee. Parking needed to be smooth and accessible. Games needed to run on time. Concession stands needed to be fully stocked and staffed. Restrooms needed to stay clean.

“I wanted to make sure from an operational standpoint that we were running flawlessly,” he said. “And I’ve got to say I’m very happy with the way things have gone.”

That’s not to say there weren’t places tournament organizers saw room to improve. Roos mentioned continued cultivation of the natural grass competition fields, something Salango already is committed to for future tournaments. Shawnee facilities manager Katie Arthur saw some smaller things that could make a difference, like increased signage and making sure the radios tournament officials used were all on the same channel.

“I think every single person who’s had something to do with this event can hold their head high and be proud,” Arthur said. “There are very small, minor details we can fix for next year to make it even more perfect.”

It was little things – like Dunbar Mayor Bill Cunningham greeting people every morning as they walked into the Shawnee complex – that made a big difference this year, and could make a difference when future tournament sites are announced.

Salango said West Virginia will bid for the 2021 tournament. Roos said that because Shawnee and Barboursville sit in the southwest end of a region that stretches to Maine, it would be tough to turn those sites into the perennial tournament headquarters. But from what the USYS saw this year, West Virginia will be a contender for years to come.

And that’s good for the area, as Salango said early estimates put the tournament’s economic impact at nearly $20 million. And next year, local hotels and restaurants will be even better prepared to handle the throngs of people who will descend upon the Kanawha Valley.

“Sports tourism is growing in West Virginia,” Salango said, “and any time we can step up and show the rest of the country what we have to offer, it’s not just good for Shawnee, but it’s good for the state.”